Sculpt an Egyptian God from a narrative

When the death throes scuttled through his murmuring lungs and chuckled down his carotid, it was finally over. A restless night was day; the dewlight of dawn blued the thin curtains, lighting the empty eyes. The jackal's head distended over the corpse's mouth, jaw unlocking and teeth glistening. Its human stomach rippled and something within it gurgled until a clear amniotic expelled from within, cascading into the dead man. As his body filled, his body emptied; blood dripping up from bulging eyeballs into the nostrils at the end of Anubis' snout. When the embalming was complete it howled a mourning howl.

As in the text I wanted to catch Anubis in the middle of the action. I chose to freeze the moment after the jackal regurgitation when the dead man is already expelling his fluids. Anubis is a God, but I get from the text that he is somewhat a wild beast as well, like a force of nature, so I wanted him to look like that. In the text, Anubis seems to be helping the dead to pass on to the afterlife, maybe so he can continue with his work measuring the man’s soul against the feather, and I wanted to convey the violence of the process.

In the statue, the embalming process had already begun, supposedly by humans, when Anubis showed up to give the final touch. The internal organs and some of the blood had already been removed and placed in jars beside the body and the bandages are somewhat in place. My Anubis has his right hand to the sky and is channeling his power from the afterlife through his left one into the poor man’s body. His power is so strong that it ends up lifting everything into the air.

What goal are you looking to achieve with the final piece?

My sculpture is meant to be the materialization of a concept. Death is violent, but it also comes to bring you peace. Anubis looks fierce with his exposed teeth glistening, but in the end it comes to help into the afterlife, if you deserve it of course.

I made this piece with 3d printing in mind; most of the elements aside from the floating rocks are connected so that the final sculpture can stand on its own. For the final presentation, I chose to do something a little more abstract this time and somewhat ancient-looking to match the theme.

The first thing I did was to sketch Anubis’ head. I know he is supposed to be a jackal, but he has been portrayed so much as a Doberman that I think that’s how he would be most instantly recognized. With that in mind, I set up to sculpt my dog head starting from a Dynamesh sphere.

Here is a short clip from the process.

Of course, I did a lot of research to find his look. Here are some of my references, and to prove my point about the Doberman head, there’s a picture I took in the Vatican museum of an ancient Greek interpretation of Anubis. 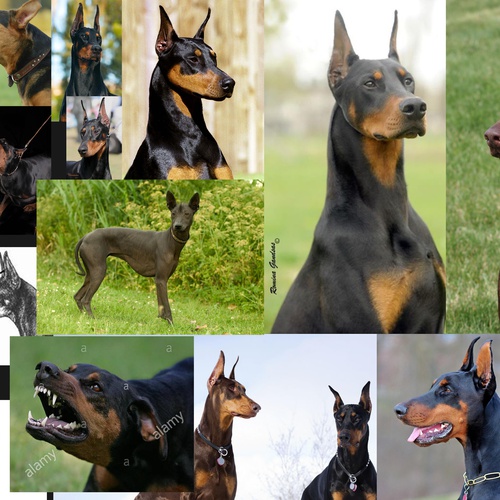 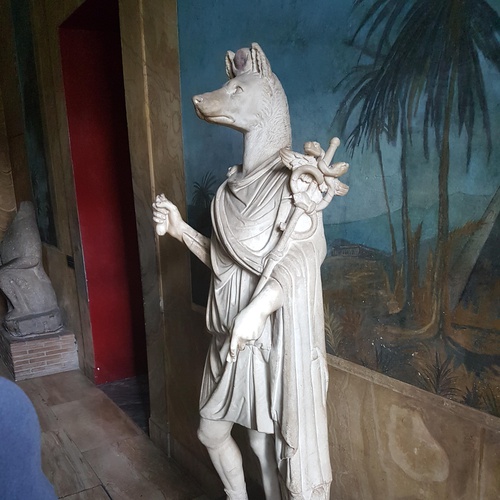 Ancient Greek Anubis from the Vatican

For the body, I merged the dog head with my own human base mesh using Dynamesh, and started sculpting the anatomy. The guy has a human body, but once he was a God; why not give him a body builder with claws?

This time I wanted to give more emphasis on the anatomy, so as in a roman marble, I gave him a few props only to help characterize him as the Anubis. The head piece, bracelets, and belt all begun as sketches in ZBrush that I later took into 3ds Max for retopology. The skirt was done in Marvelous Designer.

Turntable of the model in T-pose

A simple dog head wouldn’t do for Anubis. Next, I worked on improving his face, adding a lot of detail and opening his mouth. It was kind of hard finding good reference for canine teeth, as strange as it sounds, but in the end I managed to do a pretty good approximation based on skulls and pictures of barking dogs.

To accentuate the anger in his face I modeled the platysma on his neck activated. That muscle on humans is responsible for lowering the corner of the lips, and I figured out that was the case with my semi-human half-dog guy. 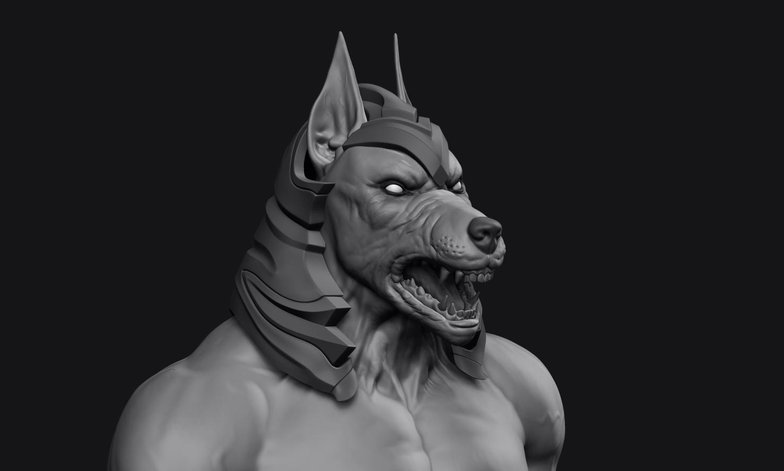 At first I thought that this was going to be easy. But it turned out to be pretty demanding to sculpt the mummy. I started with my human base mesh once again, gave the face a cadaveric look by chopping the nose off, and sculpted the anatomy showing much more bone than muscle in order to give the impression that the drying process was already in place.

The bandages I made by using the slice curve tool to divide a copy of the model in lots of Polygroups. Later I gave them thickness using the panel loops tool, used the ZRemesher to give a nicer topology, and opened the UVs. I gave an overall pass of surface noise using a fabric alpha and detailed the borders by hand to give it more of rugged look. 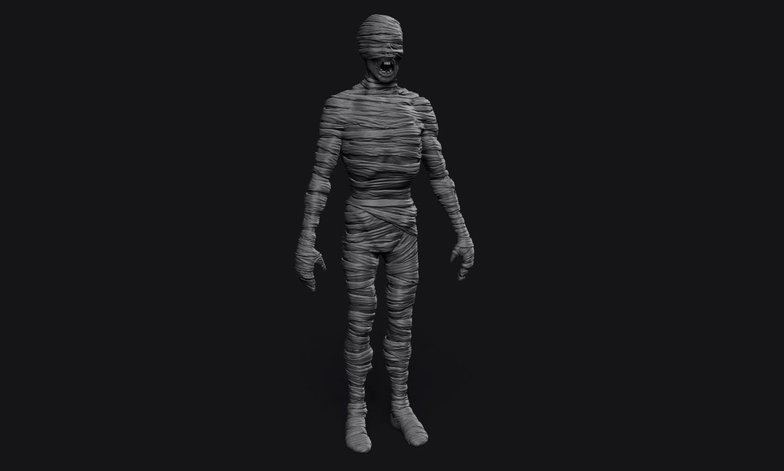 Posing is always a difficult element to me. This time I did some experimentation taking pictures of my action figures to test the framing and gesture. It was a cool exercise, but of little use as I wanted the mummy to be flying and that was pretty hard to simulate with the toys. The actual pose I did using Transpose Master. After posing a lot of the anatomy had to be re-sculpted. That’s one of my favorite steps as it is always cool to understand the bio-mechanics of each specific pose.

After posing both characters I did a decimation master pass on everything, keeping the UVs. The body and some additional parts were sent to Substance Painter to break the color a little. The final render was created in 3ds Max using Arnold with a very simple light setup. The depth of field and some color correction was done in After Effects using a z-depth render pass. 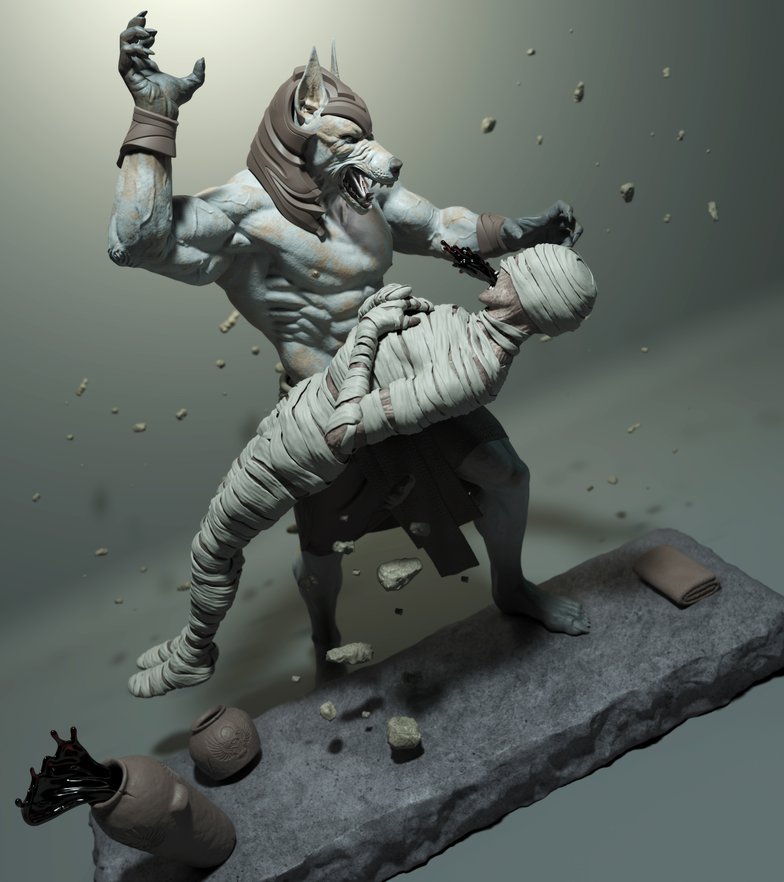