3D modeler Moacir Junior takes us through the workflow behind his Asian female concept based on artwork by Zeen Chin, using ZBrush, Maya, Keyshot, and Substance…

I'm a big fan of Asian art, especially Zeen Chin's, because it has a lot of dark elements and it’s a good definition of Asian art. My workflow is simple, I believe that many people work the same way. They start by researching a concept and sketching out basic ideas. Through research I’ve noticed that many artists share similar tastes for Asian art. Research has been very helpful and increased my knowledge and skills greatly.

Because I’m a big fan of Asian art and culture, I’ve always ended up spending many hours researching it. Further, there is a list of artists that create real masterpieces. One of them is Zeen Chin, who has a supernatural touch to his art. As soon as I saw his work I fell in love with the clothing, facial features, necklaces, hairpin details, and the translucent earrings which he sculpts. From there I realized that I had a great opportunity to evolve as an artist with the richness of the elements his work has.

Once my concept was chosen, I looked for many references of it. I spent hours on Pinterest creating folders with the art that I liked, but this last work I picked was different. It seemed to speak to me when I looked at it. I believe that elements of Hinduism are present in it, so I had to extensively research the clothes and hair – which was a big challenge – textures, and other elements to compose this piece of art. I usually prefer to use Pureref to organize my references, since it’s easy to copy and paste directly on the program without having to save one by one.

I have worked for over a year with 3D modeling and most recently I have sculpted many boardgame pieces. In order to speed up the process, I use a basemesh. For this project, I sculpted from the waist to the top part. I like to use this type of base with less anatomy so I can always practice my sculpting skills. Mainly, I like to work on the face part of the model, because I consider myself a beginner professional. It’s always easier to adjust this way and supports a good workflow.

I separated the neck and head from the rest of the model. Since the character wears a shirt, I can easily separate the neck and the head so I can focus on just these parts. I ended up using a lot of the female anatomy even though it’s a stylized character. I did a simple blocking so I could edit the details slowly. I believe it’s important to go gradually, subdivision by subdivision. Of course, I always use Dynamesh on parts that I need to sculpt holes, and like on the image above, I leave them for the final part of the editing.

To detail the face piece with pores, I usually create a whole neutral layer of pores using Surface noise then insert an alpha of pores that will repeat for the whole face piece. Before that, I turn on MorphTarget and also create layers, this way I have better intensity control of the pores without being destructive to the model itself. To avoid stretching the pores I do the face topology and the Unwrap, this way pores will have a coordinate to follow to, so they won't be stretched. For a greater detailing I manually put alphas for lips, eyes, forehead, and the nose so it curves on areas with specific pores. 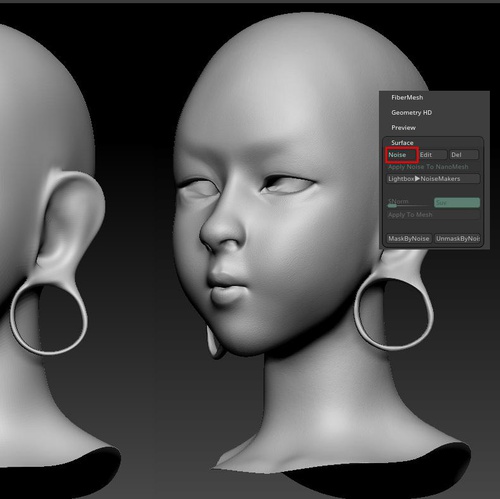 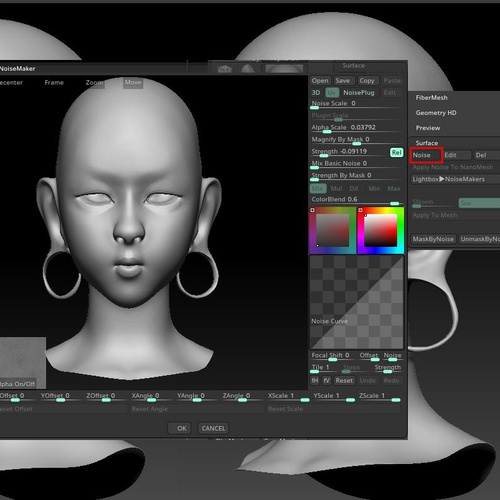 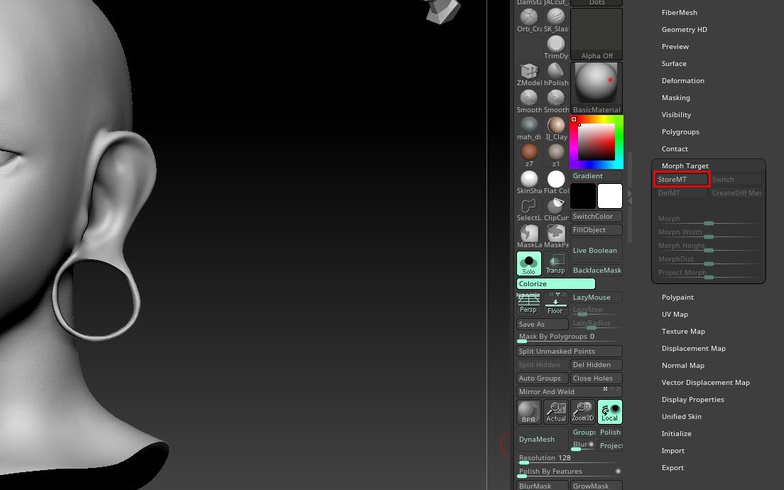 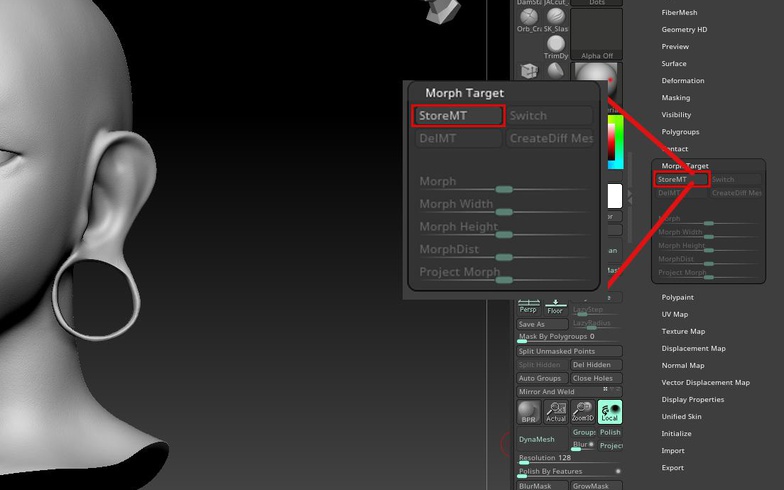 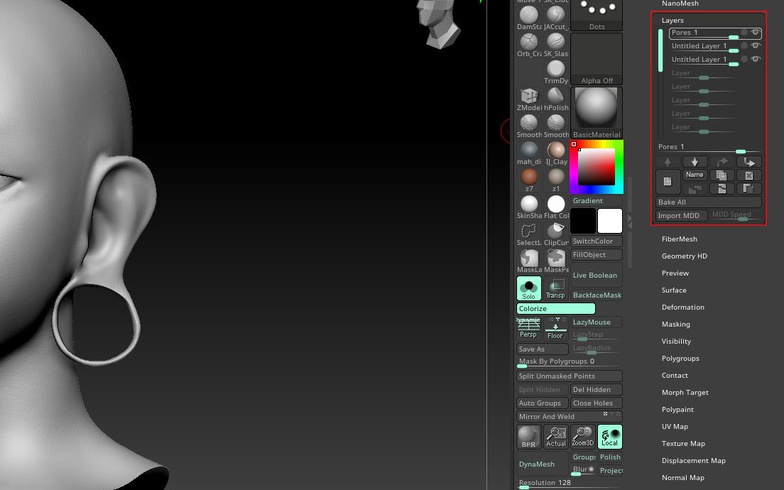 For the Pygmy head I followed the same process that I used for the basemesh, but of course working on the head specifically. The biggest problem for me on the head was the beard because each strand is so thick and curly. This made me try many different ways before I found the perfect shape and size. At first, I tried blocking the beard and then using a brush hair tool, but it didn't work the way I wanted. Finally, my best solution was to create a cylindrical strand of hair, that way it was easier to mold and change its shape. 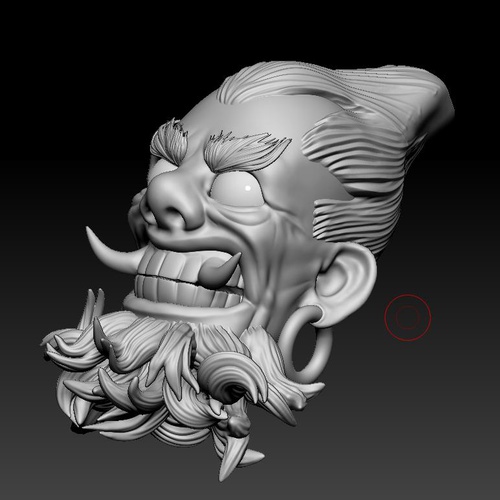 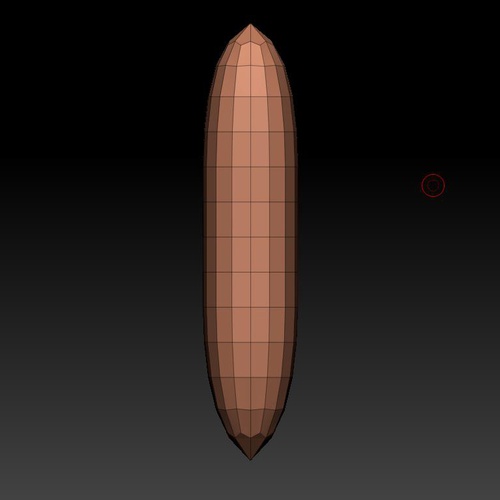 Once I created the cylinder, which can be created in ZBrush, Maya, Blender, or 3ds Max, I used a tool called Bend Curve that is located on the pivot, which appears when you press W on the keyboard. A gear will pop up on the top-left side, then when you click, it will open a box with many shaping tools. Keep in mind that you need to be using Gizmo in order to do so. By clicking on Bend Curve many shaping points will be created so then you will be able to modify the axis the way it fits your needs. 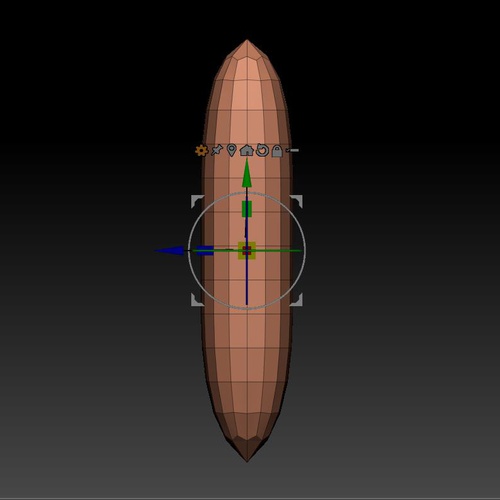 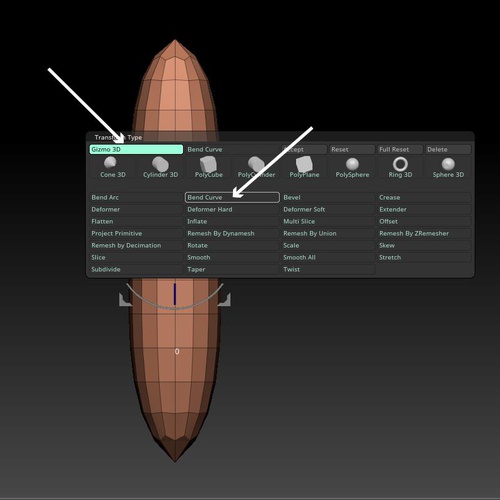 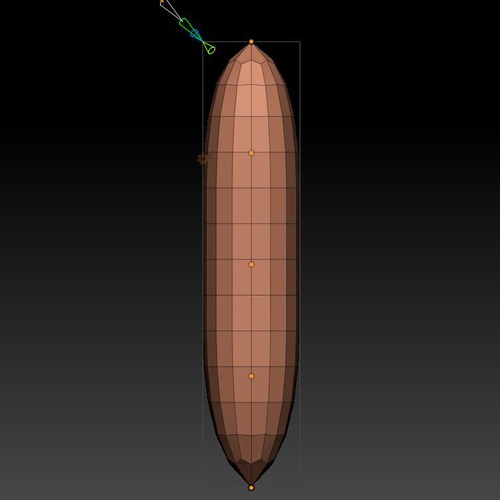 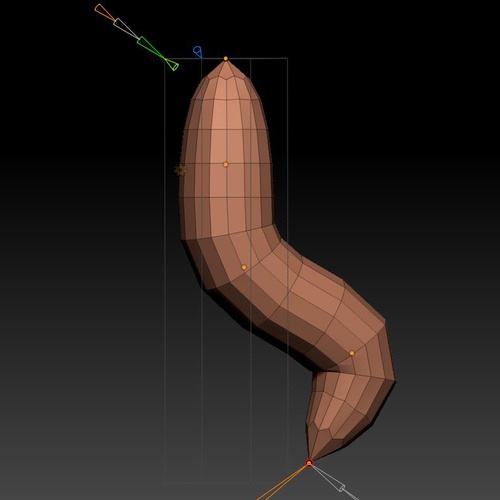 To detail hair, I either use a brush or start them from scratch. When it comes to a stylized character like this one, I use thick meshes to have a better detailing area when it’s needed. A brush that helps me a lot with those detailing areas is called Orb_Cracks. It allows me to shape details that look like strands of hair. It also helps to remove the unity of the meshes. With the Alt key pressed, you can create waves and with it turned off you can dig next to the waves. Keep in mind to dig close to the waves, following the mesh flow. It will give you a great quality in the end. In case you don't have Orb_cracks, you can also use a standard brush with density 100. 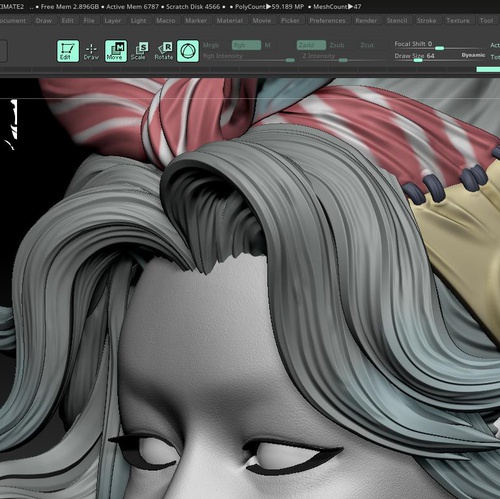 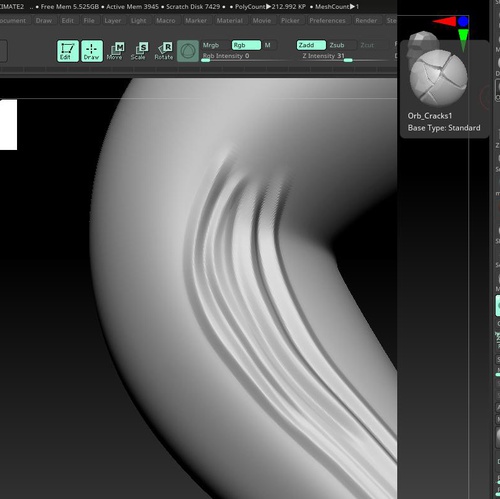 One of the biggest problems that I had was to create clothing stripes exactly like the concept. Even when I used Unwrap, I’d have issues when I tried to line up the UV. So, I decided to paint the stripes directly on ZBrush. The easiest way I found to do it, was to create groups of loops, separating them and then filling the object, and then painting a few manually. Later on, this helped me a lot with the retopology part. It gave me a great quality on the painting process. 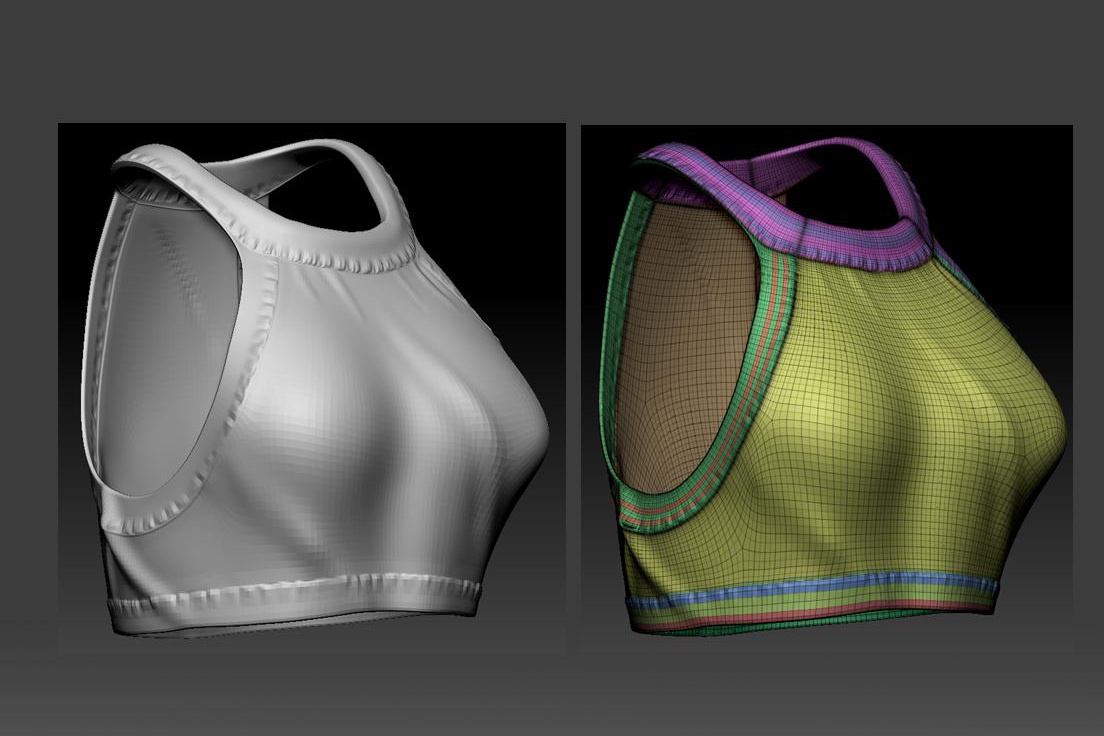 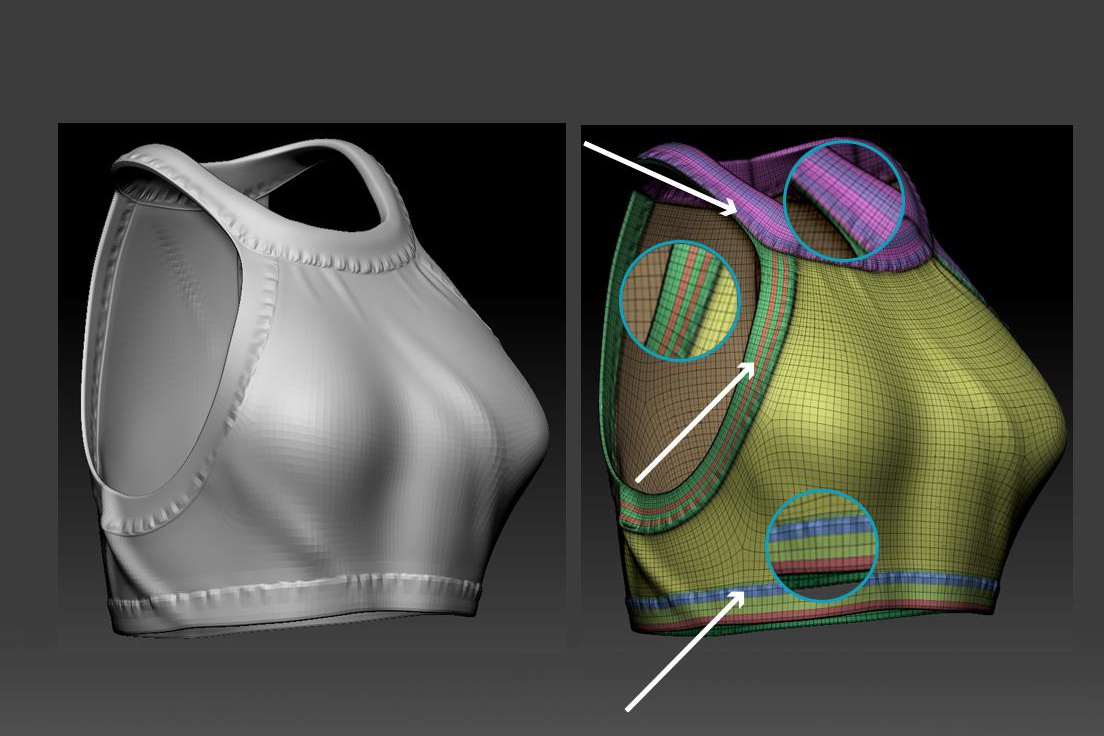 Nowadays, I work sculpting miniatures for board games. I wind up rendering constantly, so I can send them to my clients to check if they are correctly shaped. To render the miniatures, I use Keyshot. Downloading the plugin from the manufacturer's website allows you to render directly from ZBrush. It loads the same painting elements from ZBrush basically, which becomes a great tool to optimize your work. 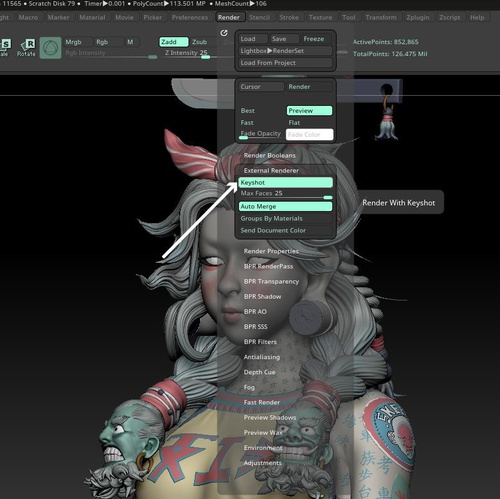 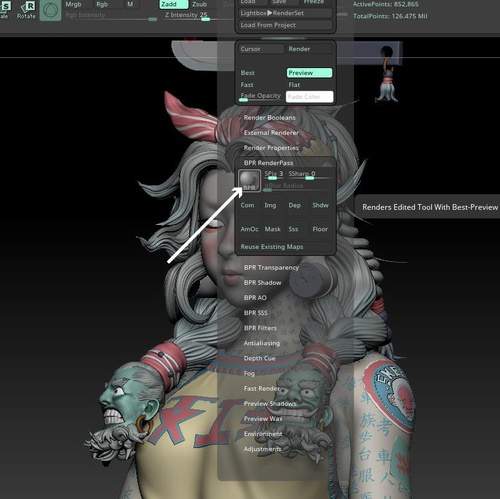 Top tip - It's never too late

I started studying ZBrush when I was 39, and today, as a 42-year-old, I work on collectibles in the board games industry. People say that the average time to finally work professionally is after 4 years of studying and I succeeded in less time than that. My hints would be: Never give up. Keep your dreams alive and admire great artists and their examples.