Book illustrator David Navia goes through the Photoshop, ZBrush, MODO and KeyShot workflow for his sci-fi and fantasy image, Coffee and TV...

Book illustrator David Navia goes through the Photoshop, ZBrush, MODO and KeyShot workflow for his sci-fi and fantasy image, Coffee and TV...

In this tutorial, I'll describe a workflow that allows you to make a realistic and painterly scene, and easily generate and integrate 3D elements to it.

Recently, color and light have been the main thing I want to depict in my personal paintings; that's why I decided to look at this amazing website, which I highly recommend to visit for those who want to get some color inspiration. Here I found a beautiful movie screenshot that I immediately liked, and it was the base reference for the painting. The movie is Practical Magic (1998). 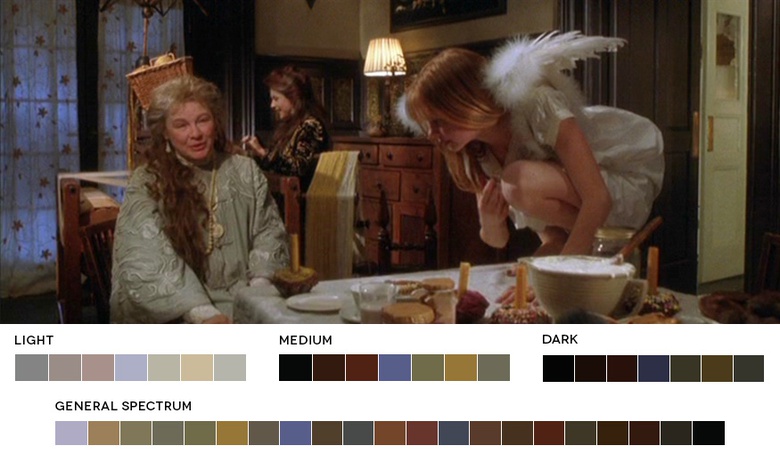 The reference from Practical Magic that inspired my image

Basic sketch in a tablet

I started out with a very loose sketch using my fingers as brushes and iPad's application Procreate. In my opinion this is the closest way to a traditional approach when doing digital painting. That part is the one I enjoy the most for that same reason, I feel like I'm painting with oils on a real canvas.

I only used one layer to paint and then another one with a miniature of the Practical Magic screenshot. That thumbnail photo let me have an overall view of the composition, color/value structure and also lighting.

I tried to replicate the color palette without using the Eyedropper tool. Keep in mind that when you are coloring, the first thing to do is recognize value, and then worry about hue and saturation. Do not copy-paste the color of your reference source; train your brain and eyes to do that process by themselves instead.

I only replicated some parts of the original composition and took many liberties to change characters and elements of the environment, such as the 2 women on the left and that shiny lamp at the bottom that I took away. 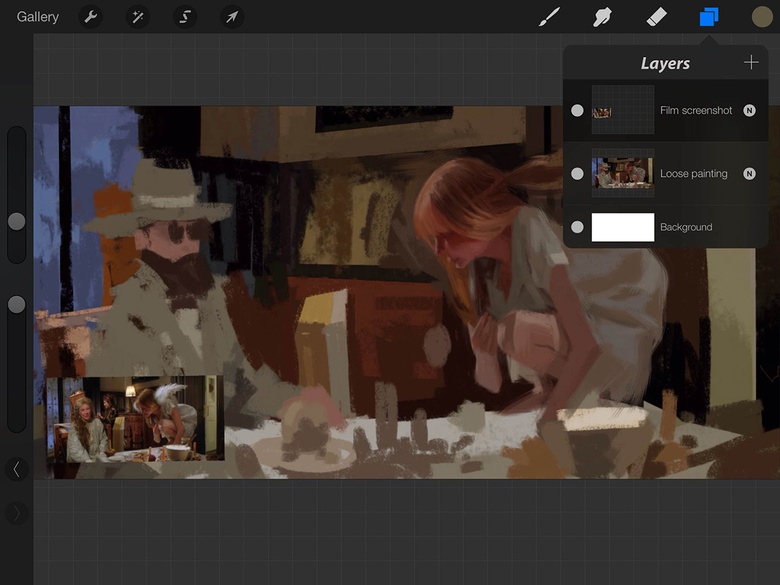 I jumped to Photoshop to do the complex work. I took some more reference to start building up the male character that is on the left side of the painting. I had the idea of an old and serious-looking detective showing a sort of secret invention to the little girl on the table. Tommy Lee Jones' face suited that character profile perfectly. Also, a photograph of my mother wearing a raincoat and doing that hand gesture helped me a lot.

Working in Photoshop to refine the details in the image

I created new layers to make the work faster and easier (one layer for the detective, for instance). As you will see in the next image, I used some more references for specific areas I wanted to refine as 'realistic but painterly' as possible.

Making more complex layers and building up the detail

Here's a breakdown of the elements used for doing these world-map type objects that are flying through the room. Most of the shapes are made with the Circle Selection tool filled with color, duplicated, distorted and rotated.

The texture of the shining ball, located in the center of the world map, was grabbed from a photo of a crystal sphere that went through some variations of the layer blending modes, plus some changes of the Hue/Saturation, and a few painterly strokes of textured brushes. 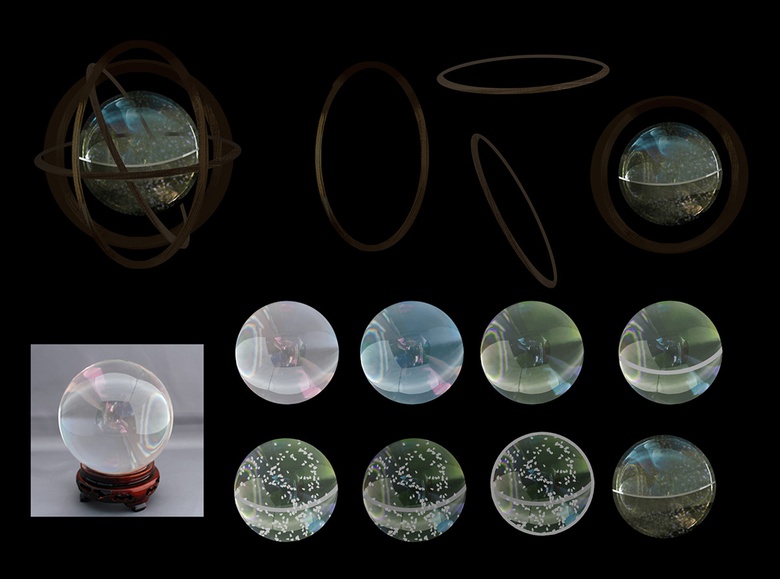 Making the floating world-maps and adding them to the scene

(MODO – ZBrush – KeyShot)
I grabbed some primitive elements from MODO and ZBrush and then distorted them as I wished to develop
a unique design.

For the circled platform on which the little men are standing, I took the Torus primitive from MODO, exported it as an OBJ and imported it into ZBrush. Then, in ZBrush I used the Standard brush to carve some futuristic-looking shapes that sculpted the form very quick and easily. 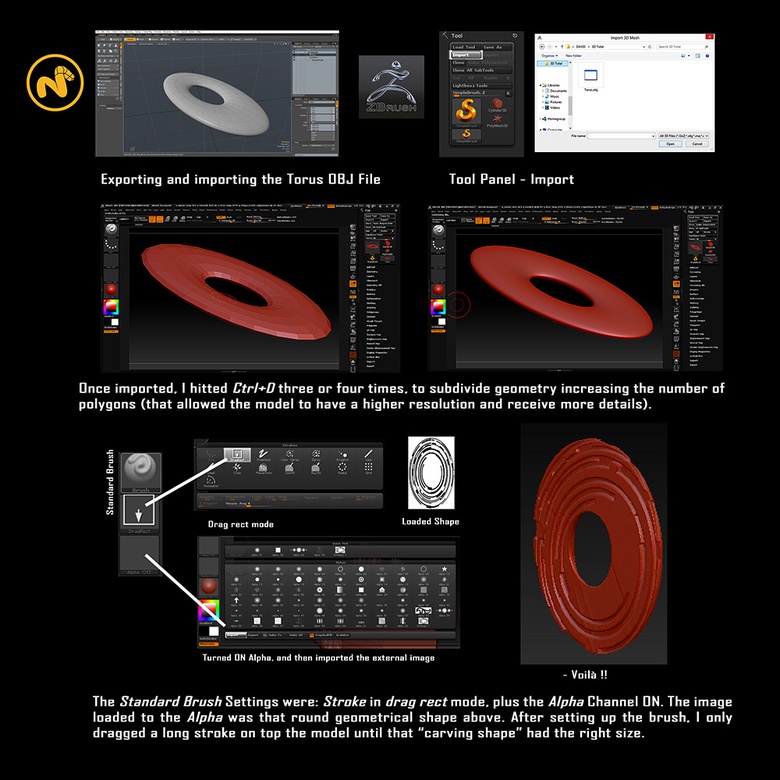 Using a Torus as a basis for sculpting in ZBrush

The little 3D people went through the same process. They originally were a generic human male preset, and I only played around with the Flatten brush and the same alpha image to deform the model and give it that kind of carved texture they have. 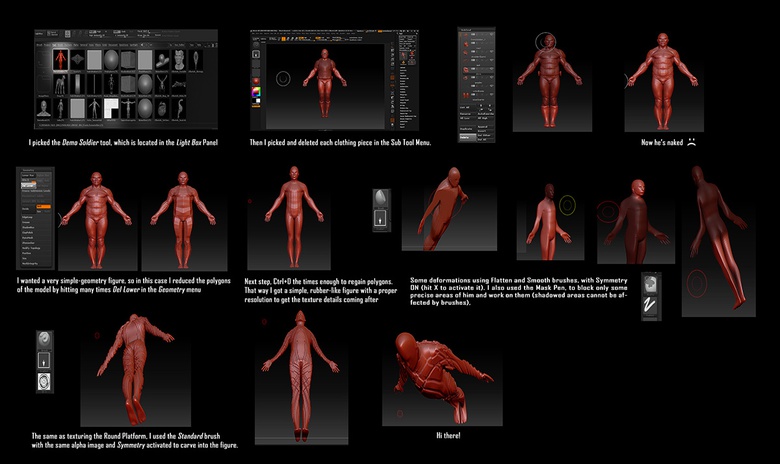 Sculpting the little men in ZBrush

The magical ball held by the hands of the detective was even easier, the rest is the same story.

Creating the sphere held by the detective

After exporting the sculpts as OBJs, KeyShot is our next tool to render the 3D models successfully and place them in a correct view angle in the composition.

For the KeyShot project, I chose as a background plate a JPEG of the painting as it was looking so far. Then, I imported the OBJ sculpts on top of the background and picked the right size and position for each one of them.

I chose a reflective material for all the models, and played around with the light settings to match the same light condition of the painting. KeyShot is a very intuitive software, hence it is actually a piece of cake to develop realistic lighting with it.

Apart from the render of the models there are 2 other render passes from KeyShot of huge importance: the Depth pass and Geometric Normal pass. Once all the passes were imported into Photoshop, the Depth pass helped me separate the silhouette of the models from their background plate, and the Normal pass allowed me to select particular areas of the sculpts that I wanted to give a shining light finish. 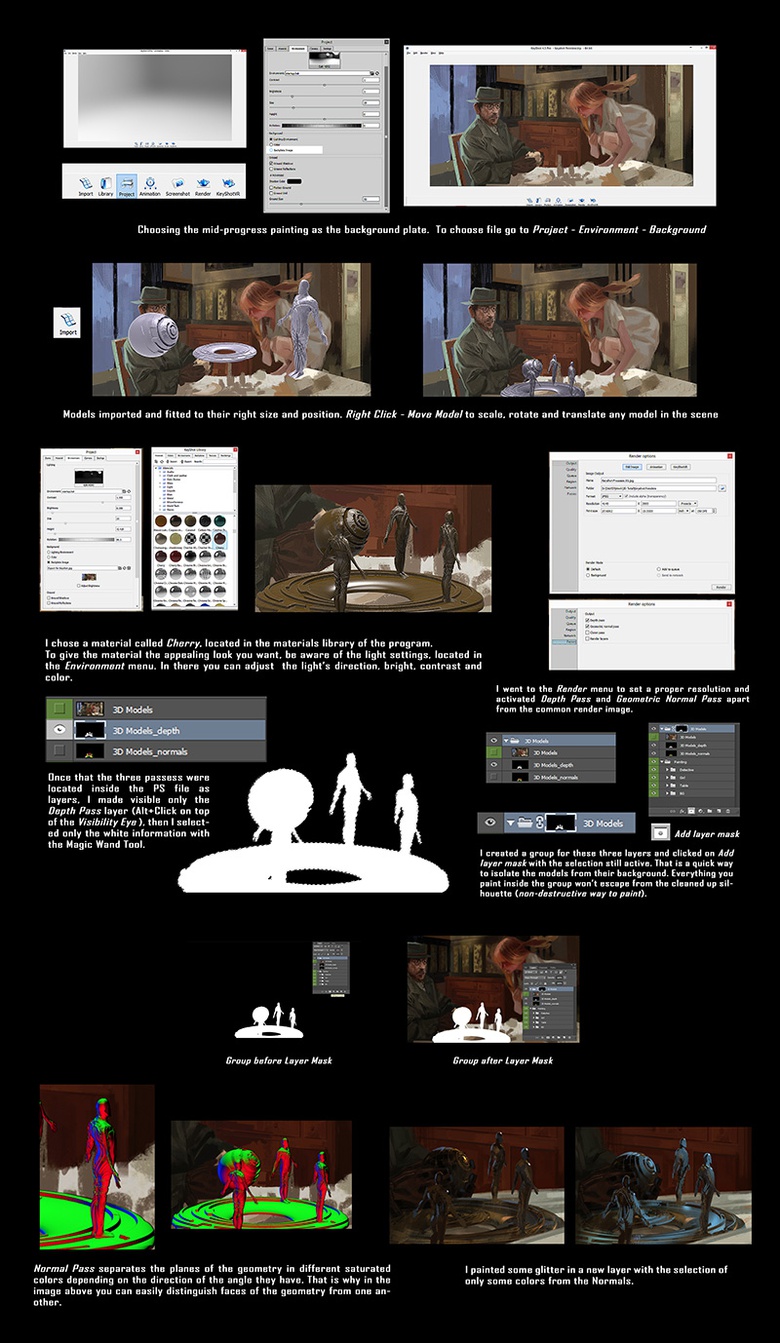 The final step was adding some lighting FX, color balance, curve adjustments, and so on. The light ray that is coming from the sphere is a photo of an x-ray FX, transformed with layer blending modes. That vibrant color contour surrounding the light ray is a way to depict realism by simulating an optical phenomena, called chromatic aberration, which you can find in many real photographs.

So that's pretty much how this tale ends, folks. I really hope you enjoyed this tutorial, and do contact me if there are any further questions or comments you want to express. Keep the art great and work hard! 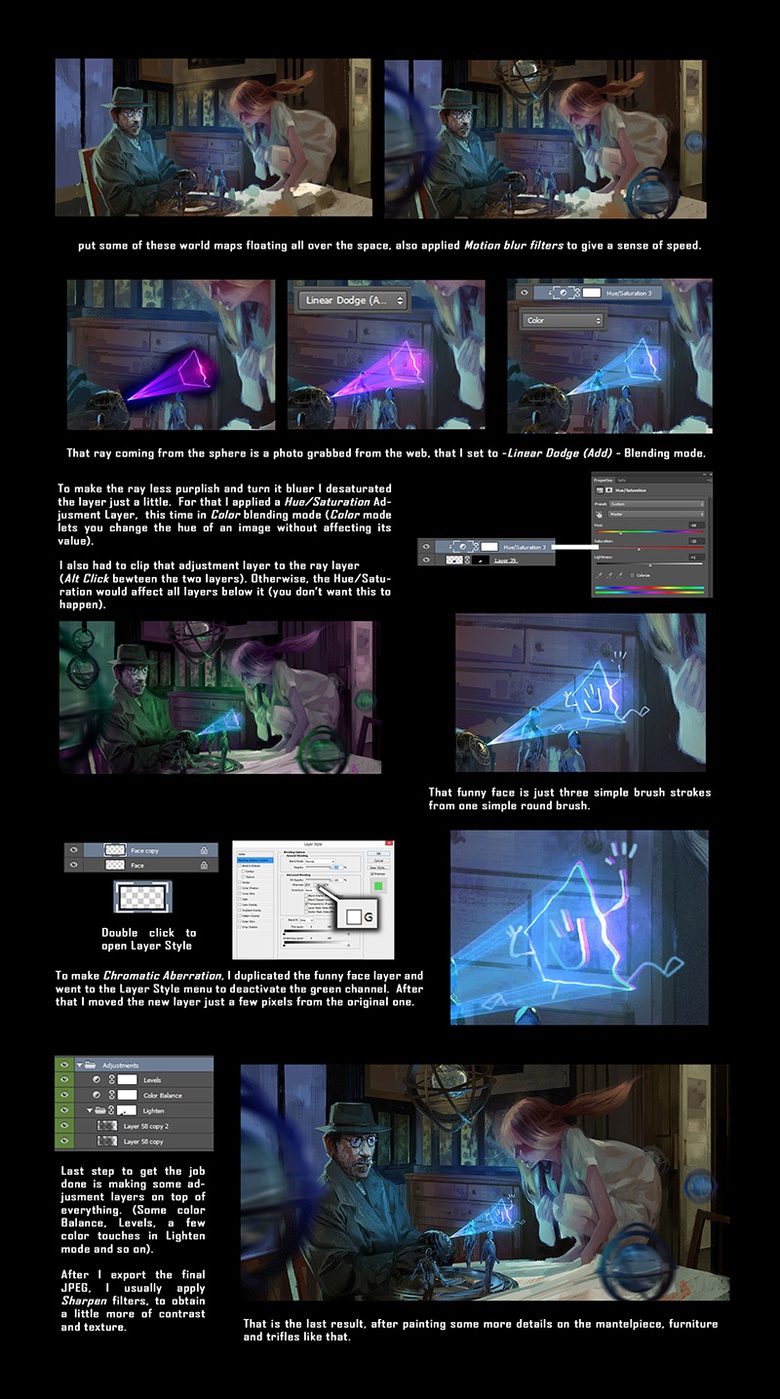 The special light effects and final tweaks to Coffee and TV

The final image: Coffee and TV

David Navia's drawcrowd website has more great content
Check out Movies in Color if you're short on inspiration
Use MODO? We have some helpful eBooks, just for you!