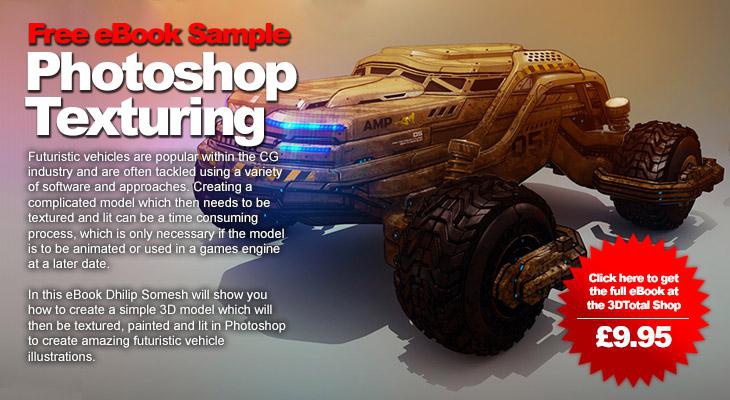 I love designing machines and my task for this tutorial was to design an amphibious vehicle. When I was in the designing phase and was thinking about my amphibious armored protected car I decided that I would call it AMP (as it is short for amphibious). This tutorial will not be about modelling, but will be about design and post-production in Photoshop.

I spent around two day (roughly 20 hours) working on this image from beginning to end. I started with a rough concept that I would later create in 3ds Max, but first I wanted to create the tires to help set the base for the creation of the model (Fig.01 - 02). Getting the wheels in place also helps you when designing the car. If you were to draw a car from the side you would probably put the wheels in fairly early on. 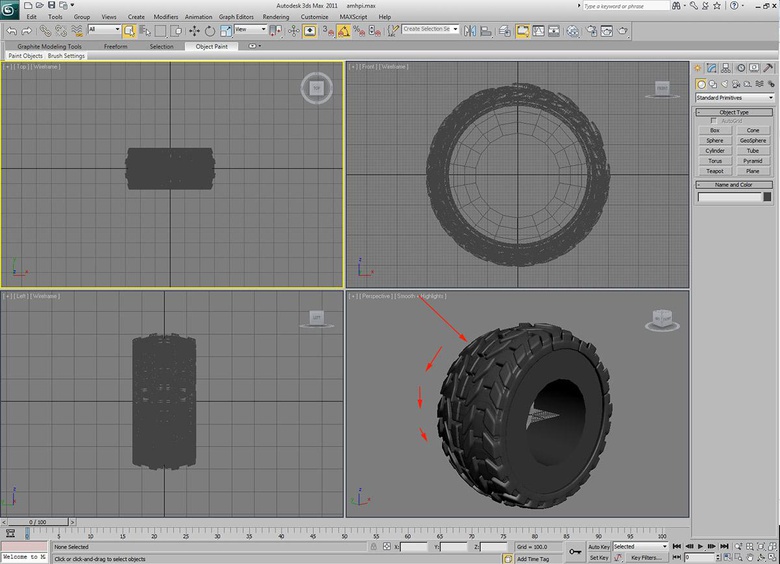 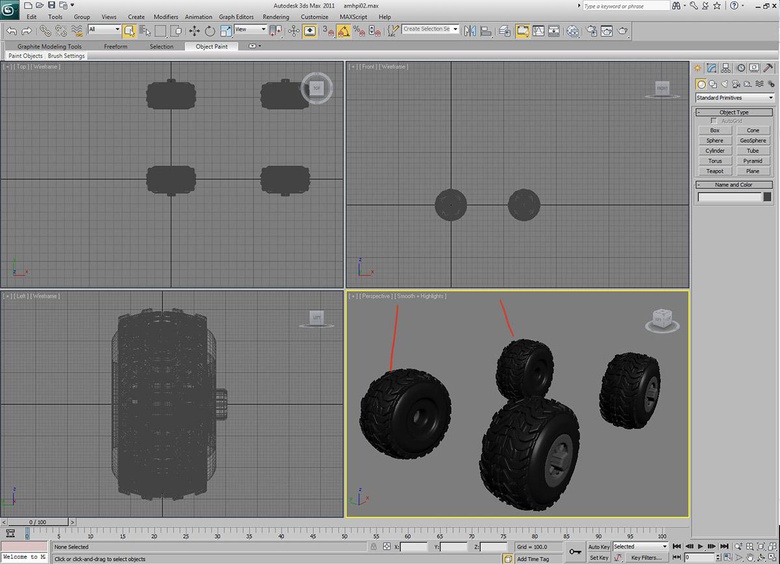 I then went on to create my design in 3ds Max. It is always better to initially design your car whilst looking at it from the side because it is easier to view the form and helps keep things simple. I created the shape of the car using the Line tool and by making extrusions in 3ds Max. I mainly use 3ds Max to nail down the design as it helps me to see the car from as many different angles as possible (Fig.03). I don't worry too much about making the model clean, and I don't have to worry about overlaps either as the model is just a base that will be manipulated later in Photoshop. When creating the body of the vehicle I was thinking of a frog-shaped snout and the shape of a small boat. This seemed to fit pretty well with the idea of an amphibious vehicle. 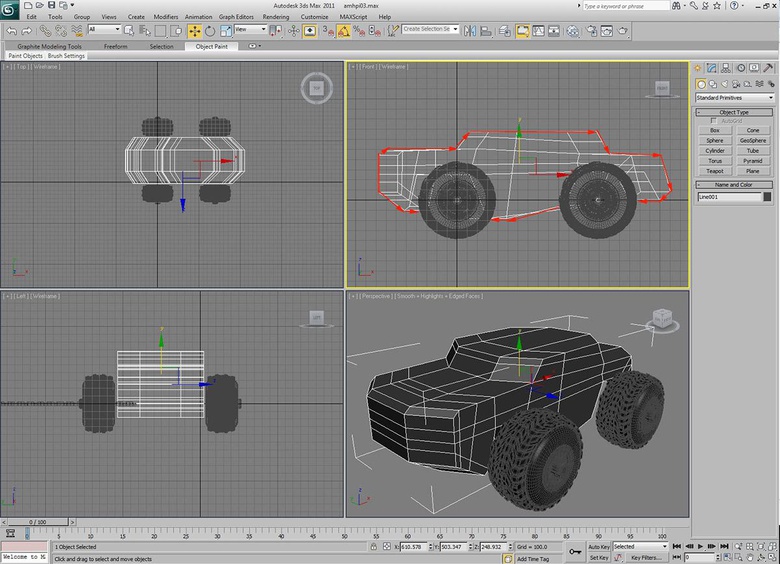 It was necessary to detail the rough shapes that I had previously marked out with the Line tool. I did this with the Edit Poly option and used FFD modifiers to achieve the bulges and curves that you can see in Fig.04 - 05. 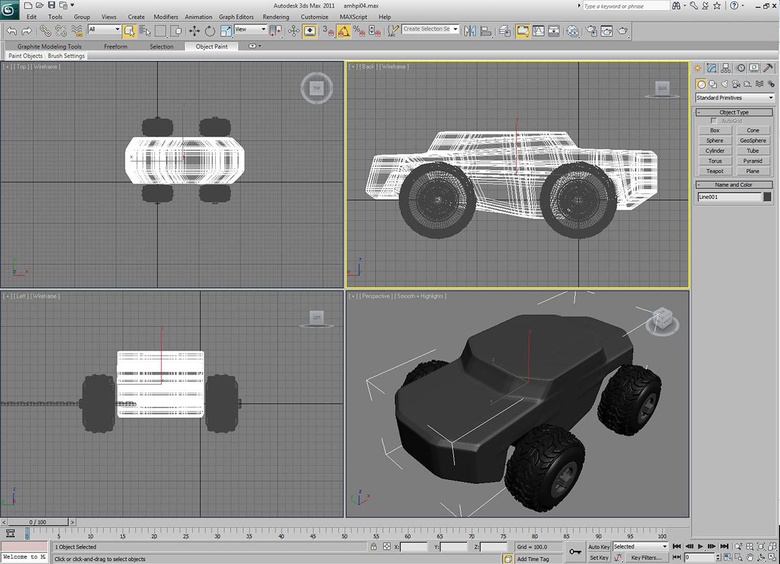 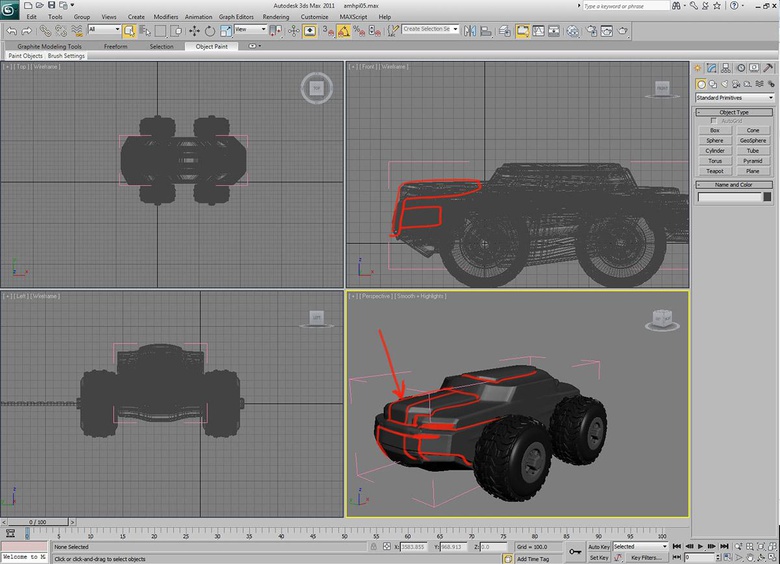 After I had created the base of the vehicle I spent time gathering references of images from vehicle factories so that I could get some ideas about new elements to add to the vehicle. Again, this was done in a certain way so I could watch the development of the overall model in 3D. You can see the additional features and how they were added in Fig.06 - 08. 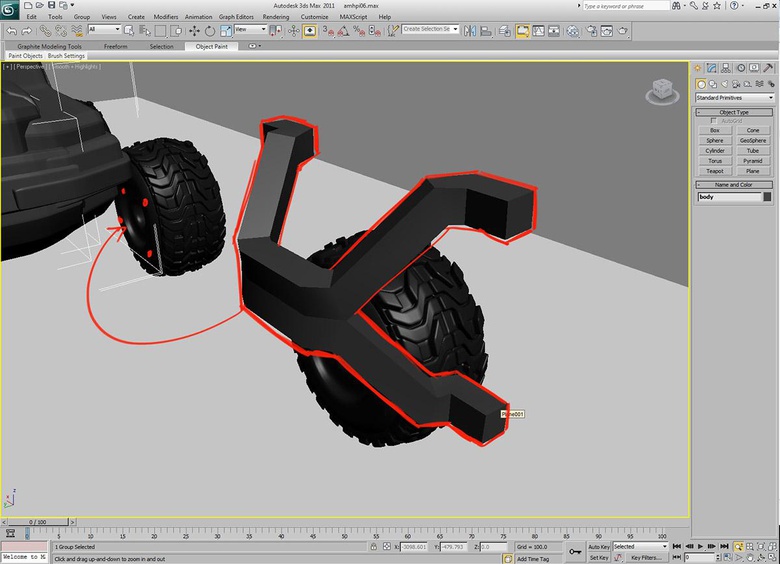 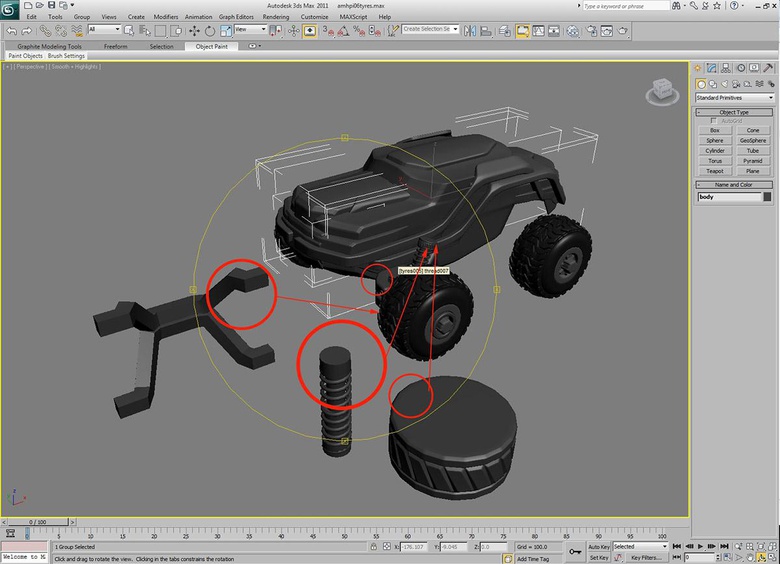 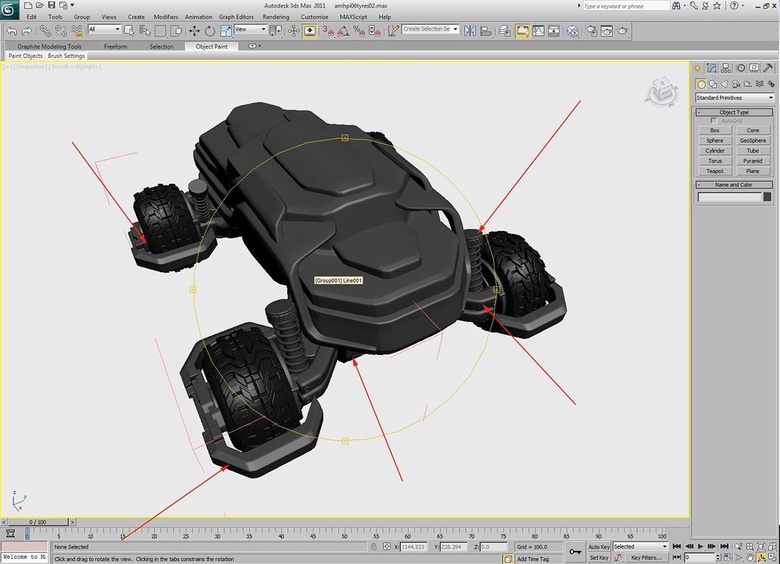 
The final stage of the process in 3ds Max was to set the lighting. I used a very simple overhead light that could represent the sun (Fig.09). This is to make the car look as it would do in its environment. I tried to keep the shadows short and simple. I then rendered the image 3000 pixels wide. This was the end of my first day's work. I thought that the arm attached to the front wheel didn't quite look right so I added some extra plates over the arm to fix the form issues. 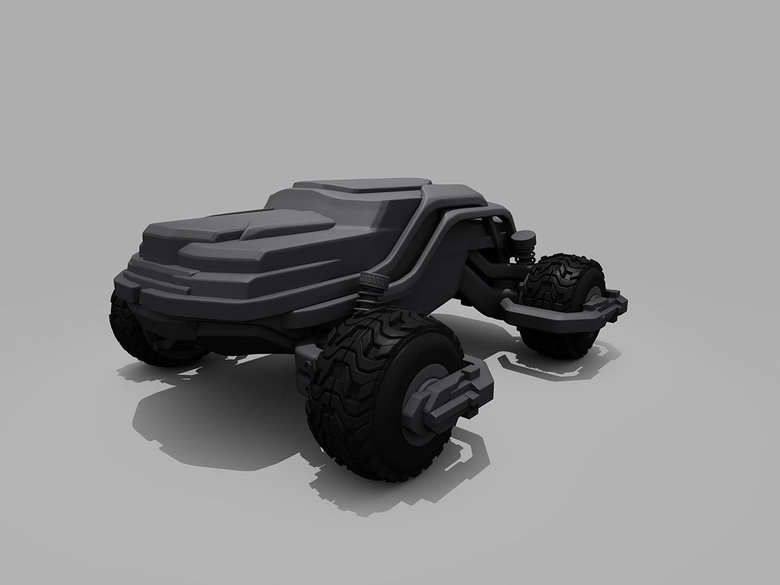 This is where I moved the image into Photoshop. I started by simply marking details and demonstrating further the shape of the vehicle (Fig.10). I also started to select areas and paint in smaller details like the vents, rivets and light color (Fig.11). 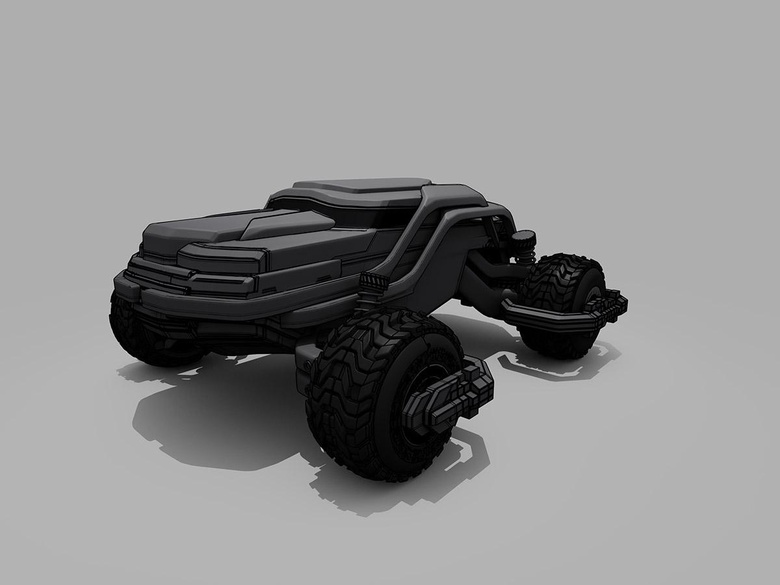 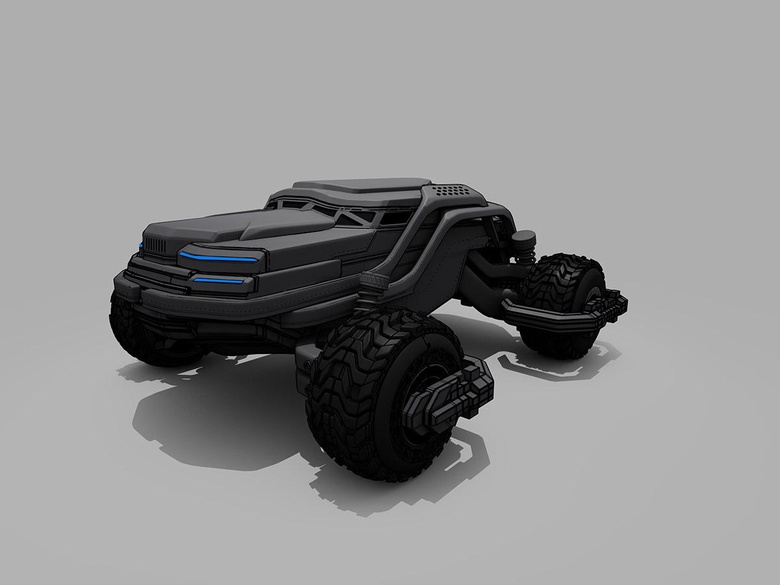 After this stage it was time to start to add all the decals, dirt and scratches. It is important to do this well or the image will look very CG-like and won't be believable. Because it is important to make the image believable I tried to give it an army-like appearance as this is the kind of environment this vehicle would be in. I used a combination of hard brushes and airbrushes with Scattering to achieve the desired look (Fig.12 - 15). 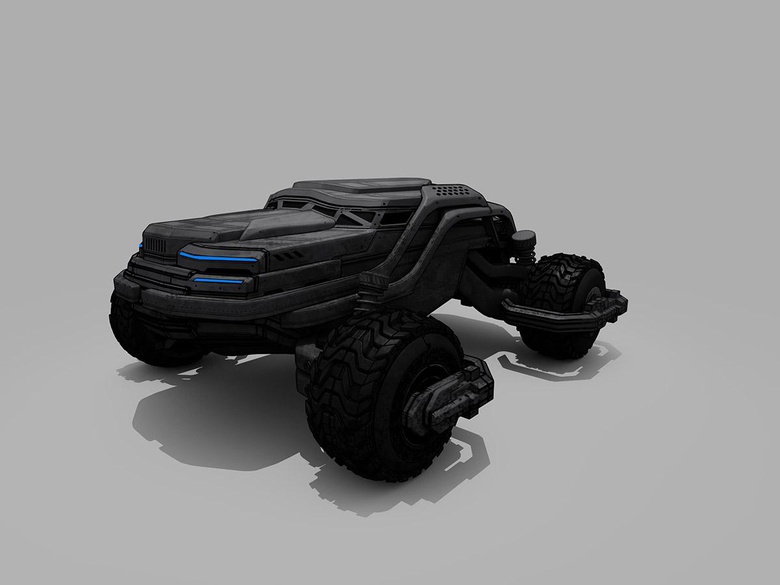 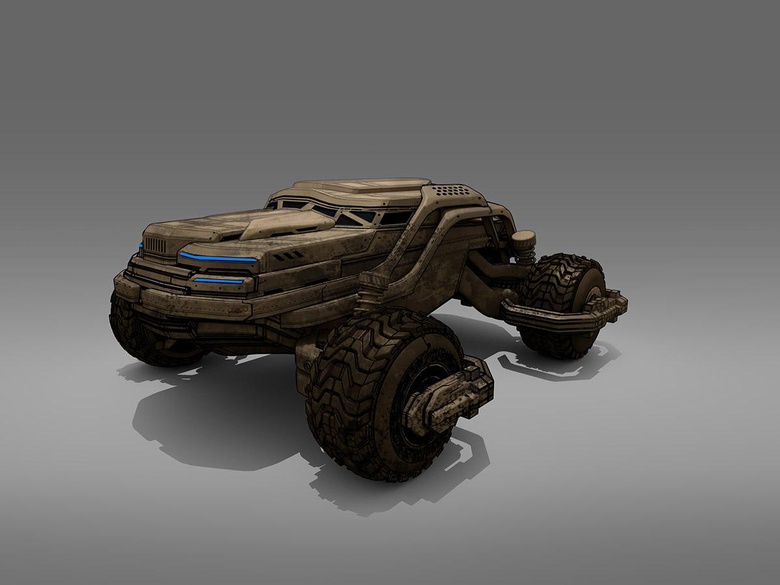 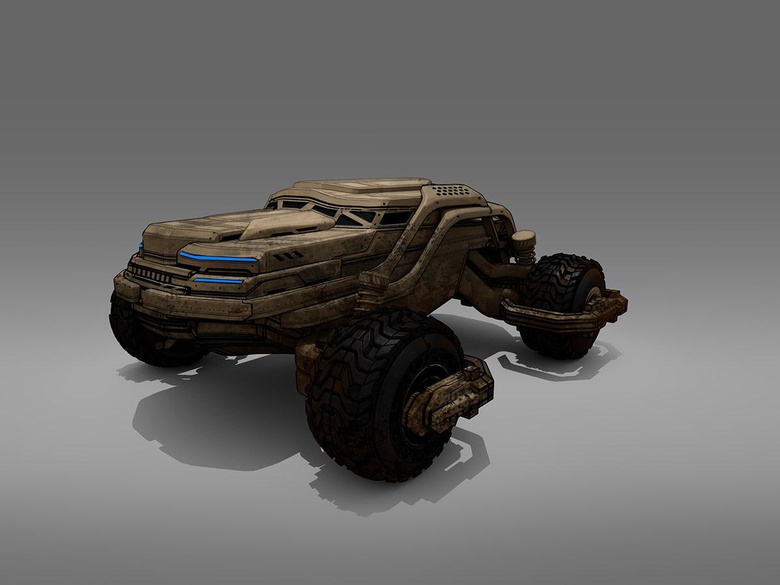 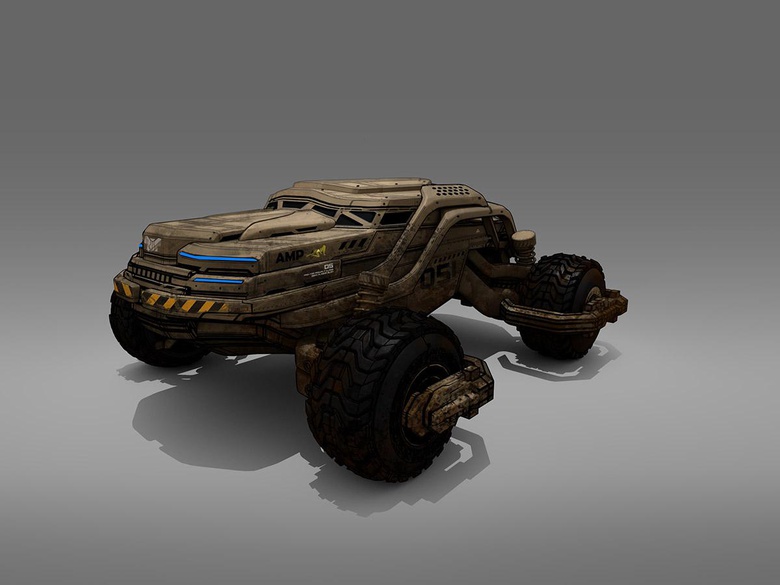 The nature of a material is mainly demonstrated through its highlights. This kind of vehicle wouldn't have a polished surface like a sports car and therefore requires less highlights, particularly strong ones. When adding this kind of detail you really need to think about the purpose of what you are painting (Fig.16). 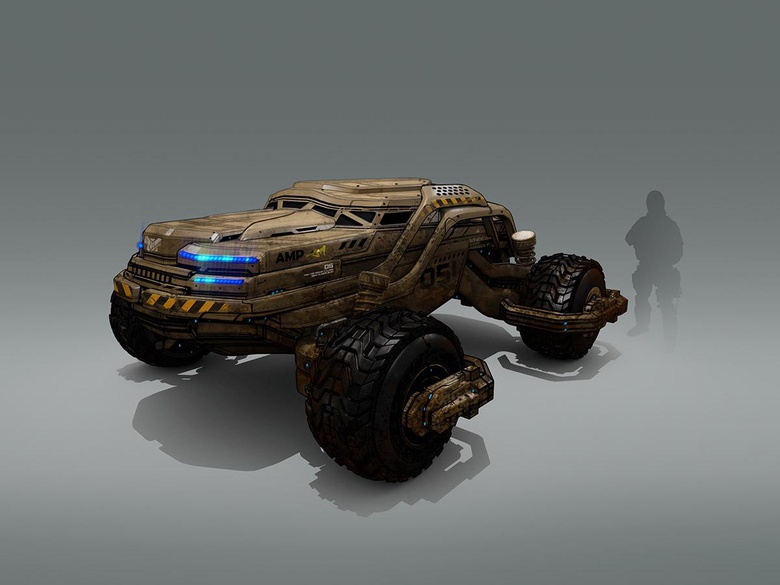 I have added decals to show that it's been manufactured by a company for a squad or a team, which adds to the story and believability of the image. Again you need to think about the purpose of your vehicle when adding things like lights. In this case the lights needed to add to the aggressive nature of the image.

I find it helpful when presenting an image to add a silhouette of a man as it makes the scale more perceivable. I will often use subtle colors in the background and foreground as this adds to the sense of depth in the image. You can also use these colors to bring out some of the colors from your image (Fig.17). I also like to present the image with some alternative angles of the vehicle. This helps people understand the details and shape of the vehicle and helps better demonstrate its purpose (Fig.18). 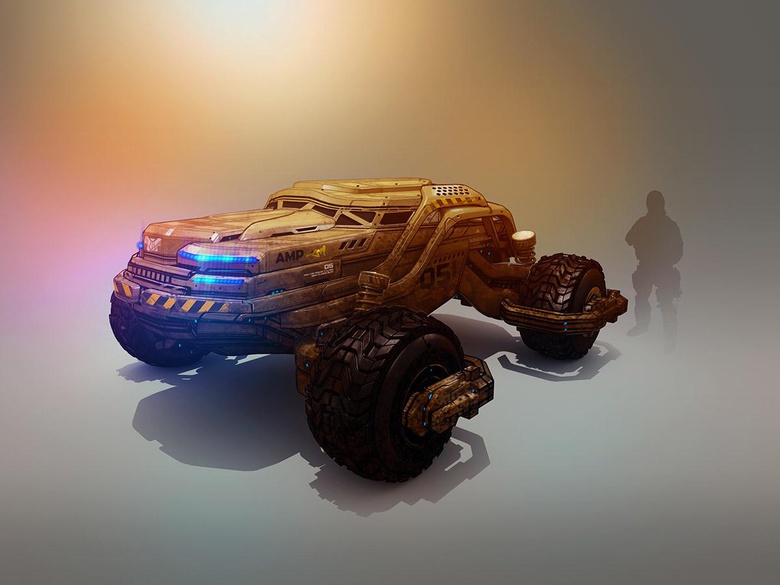 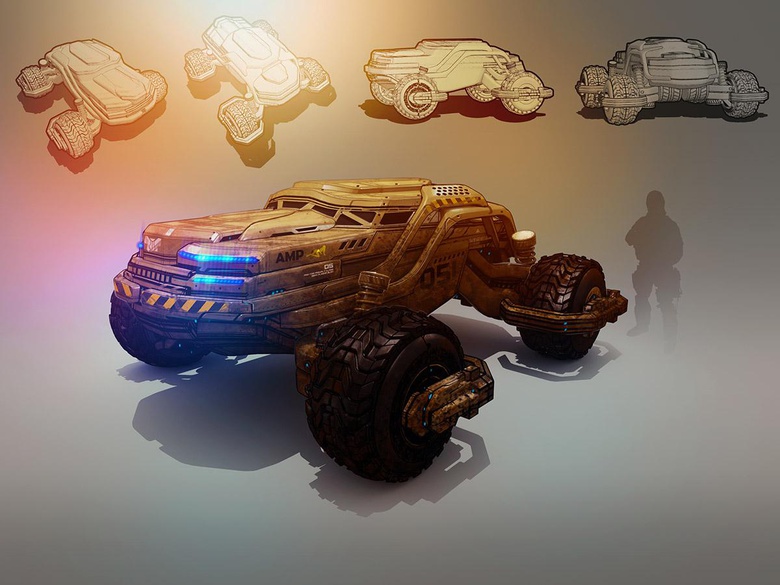 Fig.19 shows the final image. You will see that I used a few graphic details to really finish everything off. This is to really sell the design of the image. 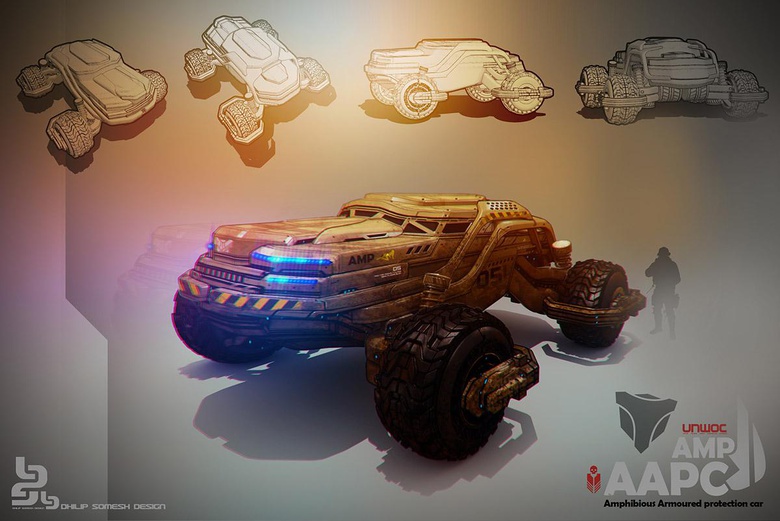