In this illustration, I wanted to convey a sense of power and elegance. The body, muscular yet very feminine, creates a seamless curve with the hair.

The human body is the most difficult subject to portray. Even the most inattentive observer can easily tell if proportions or anatomy are off. For this reason, and especially if the goal is to achieve a realistic look, it is best to use some form of reference (models, photographs, etc.) when drawing the body. Reference is most useful especially during the initial phase of the process. 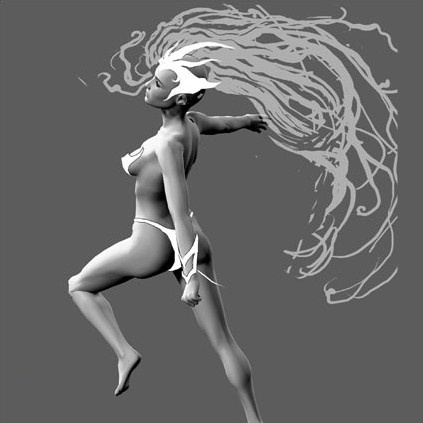 For this image, I chose to use POSER (3d character posing software) to render a pose of the main figure to use as a reference. Poser also helped me in finding the best composition and angle for the subject. As you can see in the screenshot, the poser character model I used does not carry many details when it comes to muscles and tendons or even bone structure, but it was enough for me to use as a base upon which to build my painting.

The 8x10, 300 DPI resolution poser render was then imported in Photoshop, cut in a separate layer and desaturated.

At this stage, I relied heavily on my knowledge of human anatomy.

The key requirement to draw a realistic body is a solid knowledge of its many muscles, bones and they way
the work together.

You can acquire this knowledge by drawing from live models and even from copying photographs, but the latter method does not produce results as fast as the first.

On a separate layer, I started painting the main figure using the Paintbrush tool set on normal mode with a 30% opacity smooth brush varying in size from 10 to 50 pixels wide. I referred to the poser render for the main shapes and their
position.

I used only shades of gray because they allow me to concentrate on volume, chiaroscuro and shapes without the distraction of color. 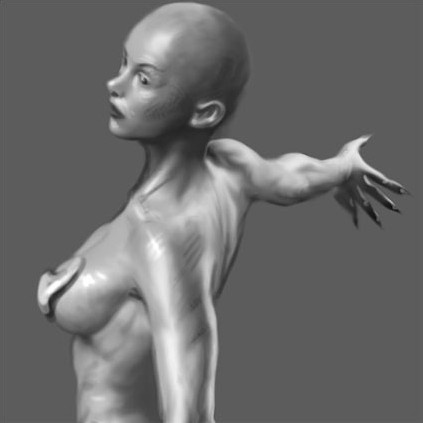 After I was satisfied with the sketch, I zoomed in the image at 200% and using the smudge tool (50% opacity, 0% hardness, round brush) I blended together all the brush strokes to obtain a smooth and realistic look.

Then, using a small brush, I zoomed in even more to add many smaller details, like the folds of the skin in the hands and feet, also the eyes and nails. 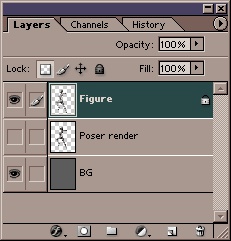 At this point, having the figure mostly finished, I added color. Flesh tones are hard to obtain because of the translucent quality of skin and because of the different degree of tones that various body parts have.
First, I used the Image-->Adjustment-->Hue/Saturation tool to colorize the figure. I selected the figure layer then launched the hue/saturation tool, checked the colorize button, set the HUE to 10, the saturation to 35 and lightness to 0. The black and white figure is now colored. The colors need further manipulation though, because the flash tone is still too uniform.

The Image-->Adjustment-->Curves tool was then used to add color variation. I shifted the darker range toward red and added a bit more blue to the lighter range. 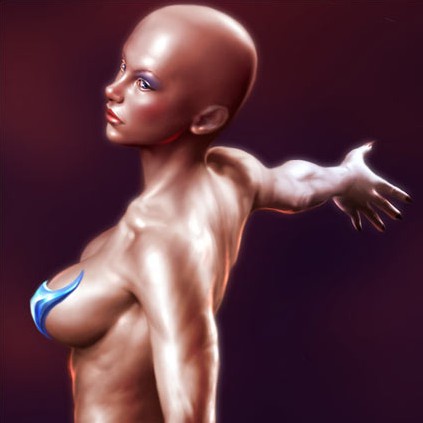 Additionally, in order to add more realism to the figure, I used the paintbrush tool to add even more red tones to the figure's cheek, nose, feet and hands. Some blue makeup above the eye was also added. I also slightly shifted the colors in the bent leg and rear arm to blend them better with the background.

Finally, I used the dodge tool to add some highlights and to enhance the contours in some specific areas, such as the legs, back and torso.

Before using the paintbrush to colorize the figure, remember to lock the layer transparent pixels to avoid having brush strokes going over the edge of the figure and partially covering the background layer. 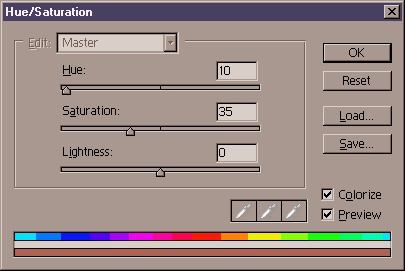 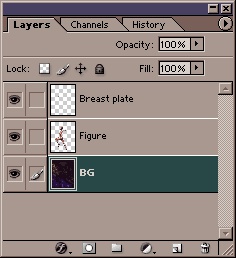 The key to painting hair in this step is to use a brush that varies in size and opacity depending on the pressure applied on the stylus.

First, I concentrated on drawing the main hair shapes with electric blue color using the following brush settings: brush tip size 15 pixels wide, 80% hardness. Under shape dynamics, set the minimum diameter to 1% and assign size control to the pen pressure. Under other dynamics, assign the opacity control to pen pressure.

Once the main shape is set, I switched to the smudge tool, mode set on Lighten, 90% opacity with a small 0% hardness brush. 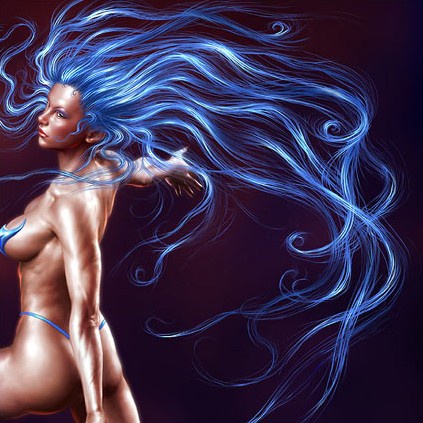 This method allowed me to add more hair strands by picking up existing pixels from the base hair shapes without affecting or smudging hair I had previously drawn.

Next, I used the dodge tool to add highlights where needed. I also used the eraser tool to make some portions of the hair more transparent. The hair was drawn on a separate layer, placed above the main subject layer. 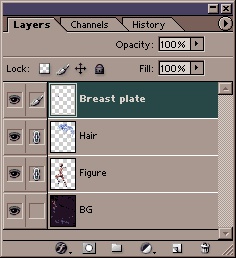 Lightning bolt and electric sparks were drawn on separate layers, and then a glow effect was added to give them a realistic look.
The glow was achieved as follows: in the layer blending option I enabled the Outer Glow effect and set its blend mode to Linear Dodge, opacity to 85% and size to 30 pixels, the color used was the same as the lightning bolts.
I then set the layer blending mode to Lighten and opacity to 85%.
Additional glow to the hair was added by duplicating this last layer and setting its blending mode to Linear Dodge and opacity to 50%.
The edges of the arm holding the lightning bolt were also enhanced to give the impression of a stream of energy emanating from the lightning bolt. 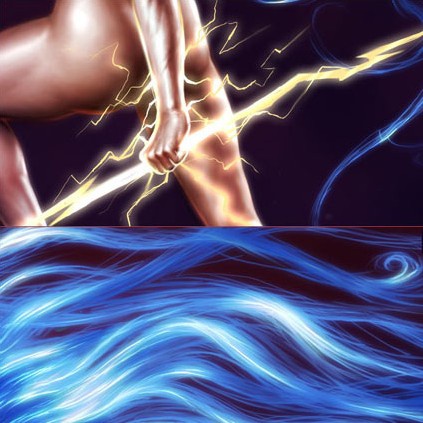 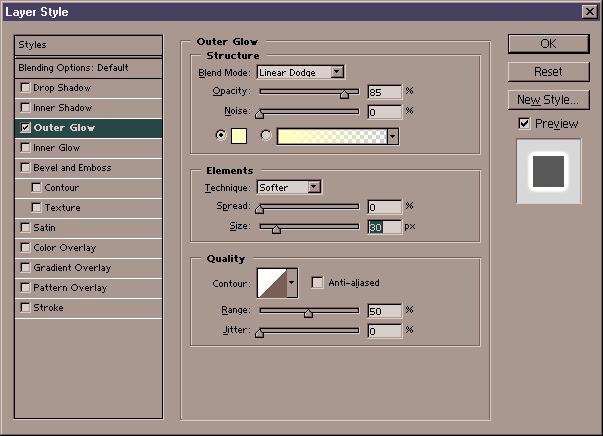 The background was done mostly with a large brush set to vary in size and opacity based on the stylus pressure.

In the shape dynamics brush settings, the minimum size was set to 30%.

On the upper portion of the background, I used warmer magenta tones to balance this area with the blue hair.

The same principle applied to the lower part of the background where blue tones were employed to bring up the figure's legs (colored in warm tones). 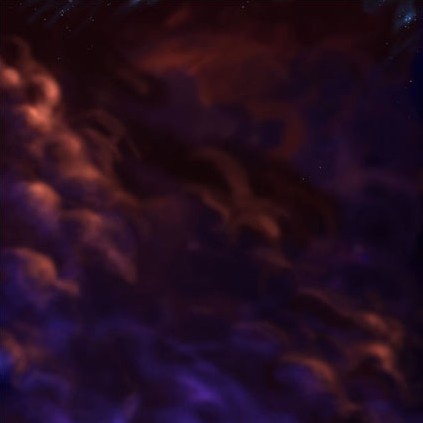 I made sure not to add any sharp details to the background (besides a few stars), as that would have been detrimental to the main figure by shifting focus away from it. Some color balancing was applied to the background layer. 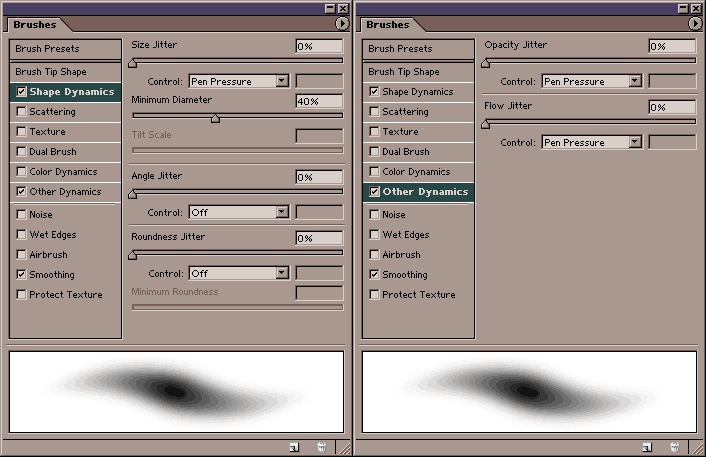 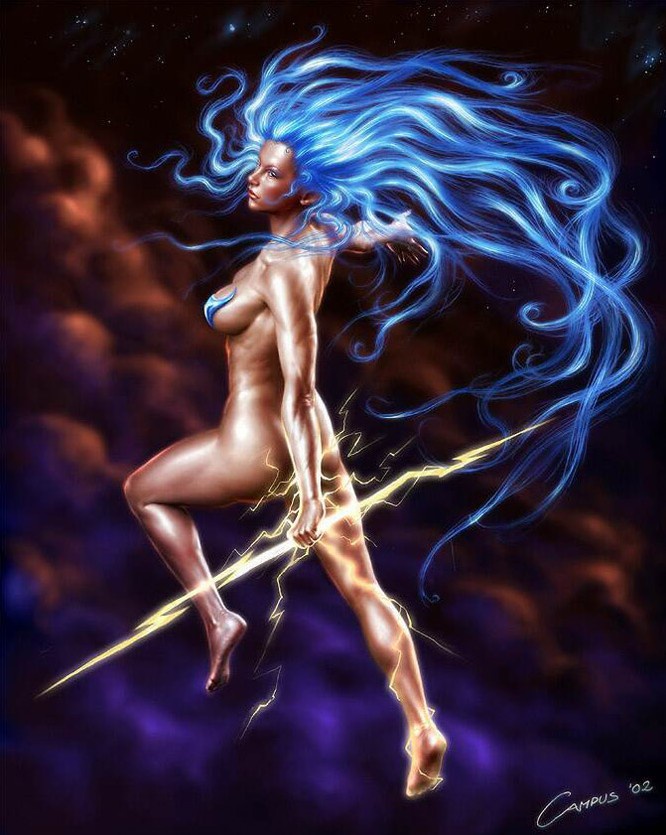