Painting with symbolism and design-led choices in Photoshop

When browsing tutorials I've often found many that focus entirely on the “how” and not quite as many that focus on the “why.” Having created tutorials in the past that talk entirely about my techniques I wanted the focus of this tutorial to be more design led. I’ll talk mostly about the choices I've made and why I've made them as well as the research I do, from reference to symbolism. 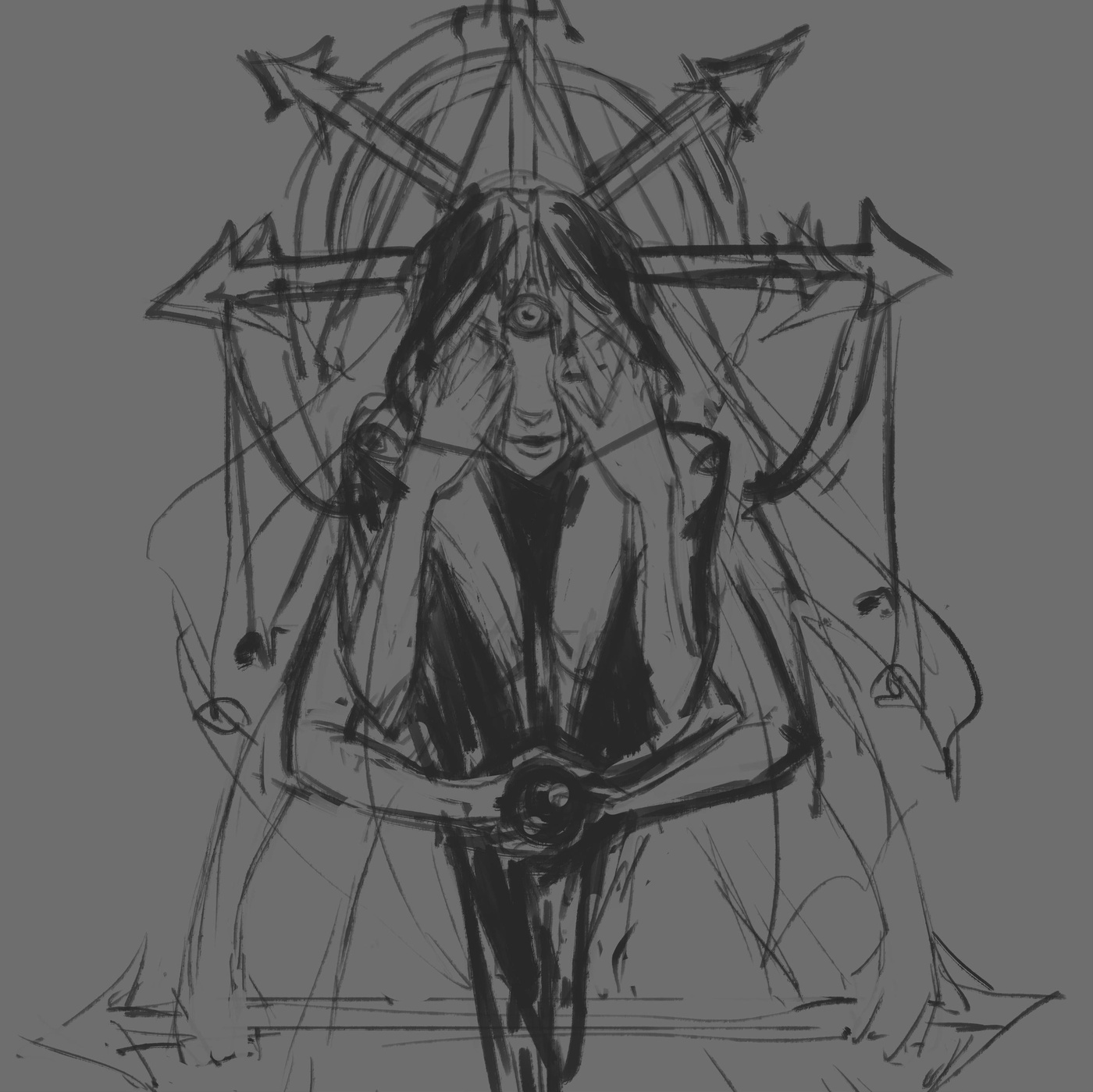 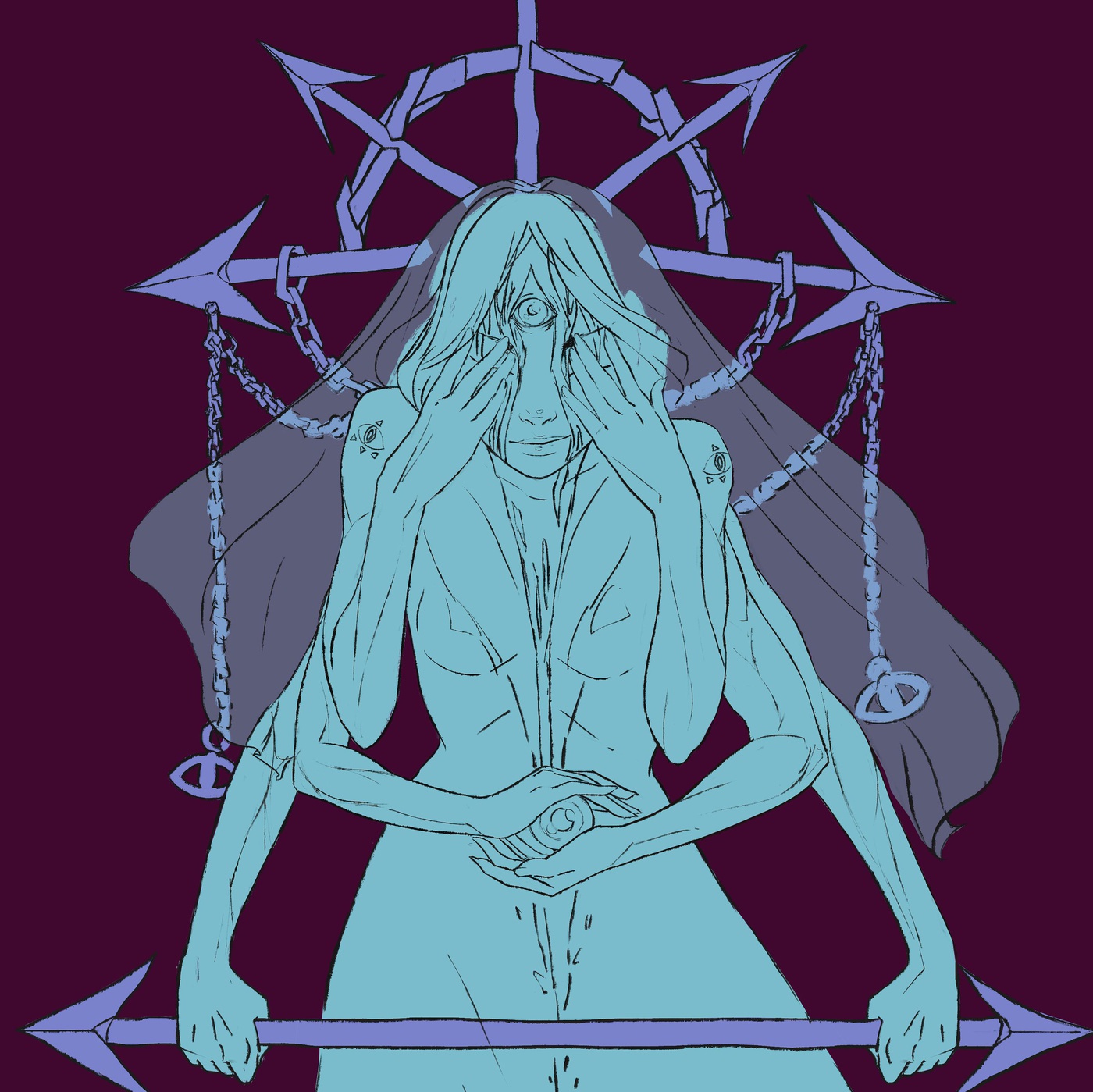 This is a character focused piece that introduces us to a
goddess of Chaos, styled as a classical portrait.

I think it's really important not to have too many outside influences while you're sketching as I believe this can create constraints on a subconscious level. When sketching my ideas I try not to worry about anatomy, whether things make sense or not anatomically or how I'm going to create the final work. I'm just trying to get an idea down and what I first put down is usually pretty ugly and generally quite incorrect, but it's an idea that's free and fully my own. 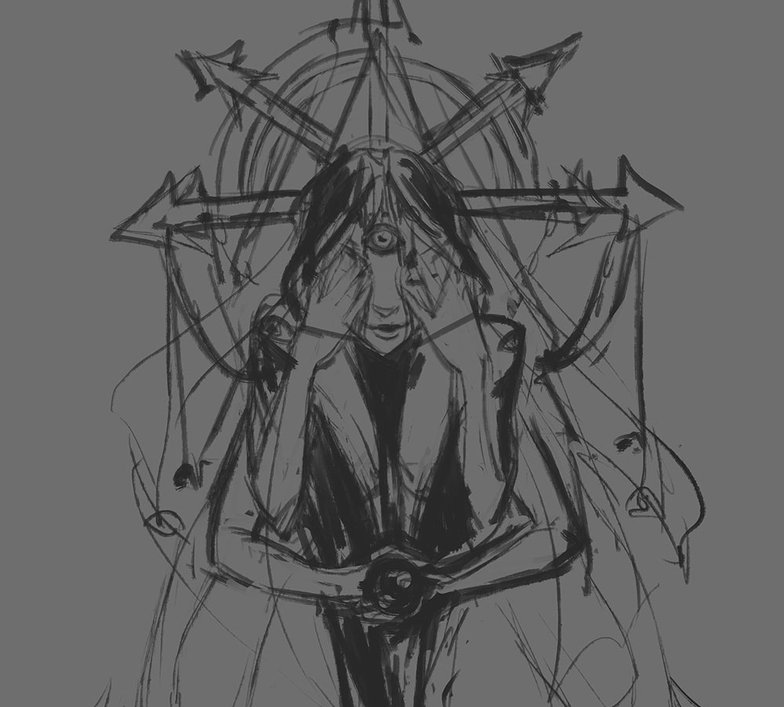 Sketching without reference removes subconscious constraints imposed by outside influences.

Once I know what I want to do, I can put together the references I need. You can spend hours searching the net for the perfect pose and reference but I've found that it's generally easiest to just create my own references. This also ensures that I'm not forcing rigidity into my artworks as is so often found with stock photos.

I spend some time thinking about the artwork I'm creating and try to feel the poses I'm getting into. It's important that the reference I take feels natural and not forced, as forced poses will be rigid and the falseness of them will be apparent in the final drawing. 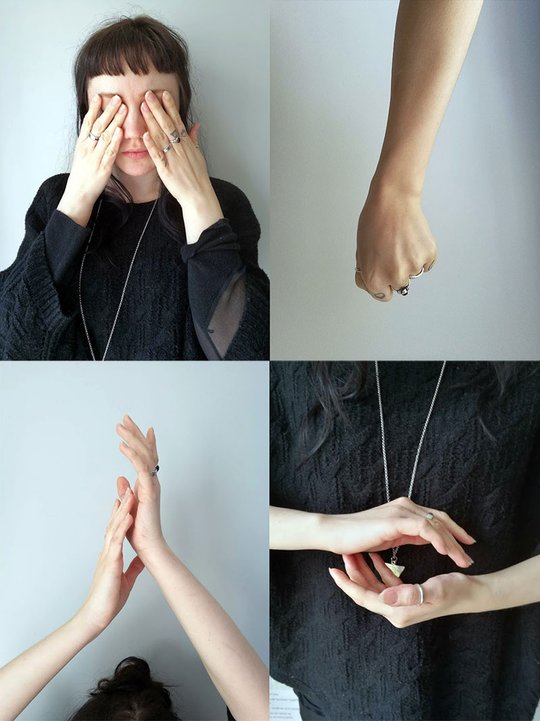 I am always my best model as I know exactly what I want from the references I'm looking for.

Step 03: Working with your reference

Photoshop makes the temptation to simply trace over reference so desirable but I think it's really important, even if you are using reference you've taken yourself, to use the reference as simply that - reference. Tracing will ensure that you do everything spot on correctly, but drawing from reference means that you have the opportunity to create interesting lines with exaggeration and more character than you could do if you were just creating a copy of a photo. It's also important to remember that nothing is learned from tracing, so working from reference is also a good opportunity to refresh our knowledge of whatever the subject is.

For this piece I wanted my anatomy to be accurate enough that nothing felt incorrect, but also not so accurate that I lost the stylization and character of the piece. You'll see I have spent some additional time to mark out the muscles a little bit here. I’ve done this as the lighting in my reference is not very strong and I am not a very muscular model, so marking these out will help me later on when I'm adding lighting to the figure. A good old anatomy book with muscular diagrams is always helpful for this. 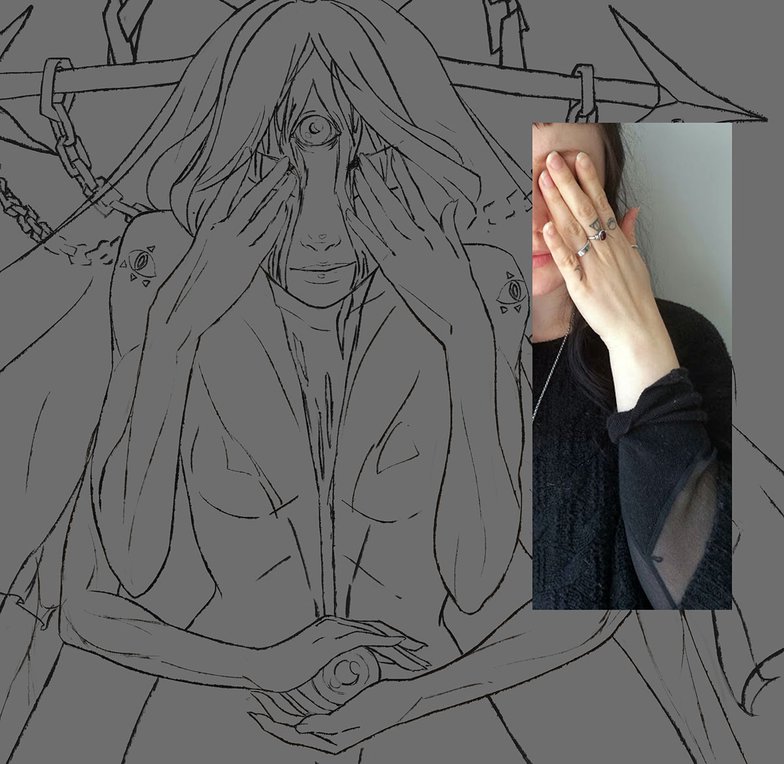 Create interesting lines and shapes with exaggeration and character by using your reference
but not tracing it.

For this piece wanted to make design choices that were interesting and symbolic. I used a lot of triangles (shown in purple) as they are a powerful shape symbolic of strength.

The crown references what is typically recognized as the symbol of Chaos (shown in red.) The Chaos mixed in with the triangles creates an interesting dynamic within the character- strong, balanced and symmetrical, but wearing a crown of chaos; these are elements that don't typically go together and I'm hoping that they create some added depth and interest. To add to that I've created a circle (shown in green) within the Chaos symbol and surrounding the figures head. This halo elevates the figure to something divine and God-like. Lastly, I've created a final triangular shape facing down in the center- this draws the viewer’s eyes to her hands and simultaneously creates a contrasting shape which is unsettling and adds to the general feeling of chaos. 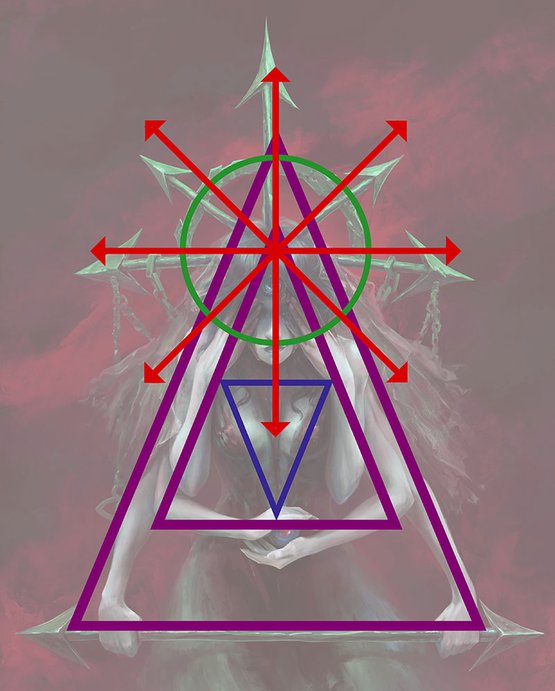 Shapes and symbology can be a powerful tool. Think carefully about the shapes you use and
hat they are associated with.

To make sure that there's an element of chaos throughout the piece, and especially the crown, I've made sure that I don't use any straight lines anywhere. Everything is a little bit crooked; the widths of the metal spear rods are all different and vary throughout each single spear. Each spear head has been painted individually to make sure the sizes and shapes all differ slightly as well. Small differences like this add to the overall feeling of disorder, despite the symmetry of the piece. 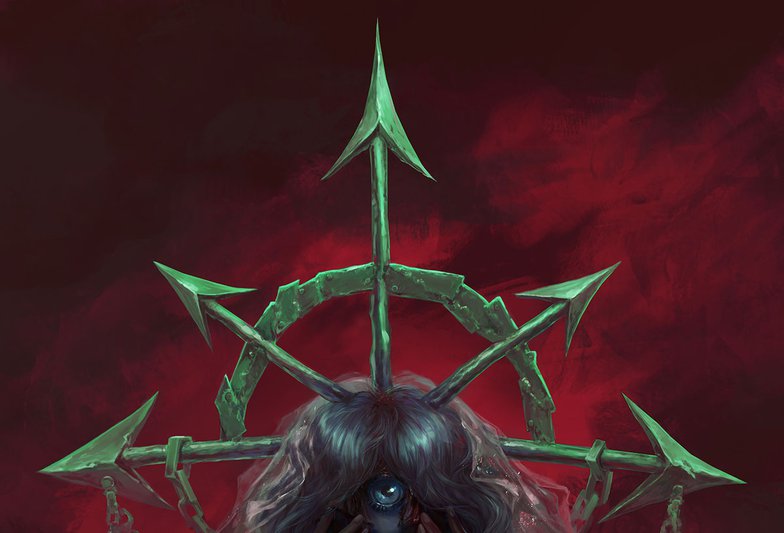 I wanted to add in some unease and a sense of chaos by avoiding straight lines.

Step 06: Creating a sense of space by using masks

At the start of every piece I like to identify the key layers; in this case- Background, Crown, Veil and then the Figure. I cut these out based on my original sketch and save filled layers of them which I can later use as masks if I need to. In this case I ended up using the masks when I wanted to soften the outside of the figure to make her feel like she was coming out of the background. I did this because I wanted the background to feel like it was a space that she was occupying instead of just having flat colors behind her.

I found that a good way to do this effectively was to select the original mask of the figure, even though the shape had changed a bit by now, and turn it into a mask where I could erase or push back parts of the figure without losing any of the hard forms in case I wanted to make areas crisp again later. The masks helped me soften the silhouette in a non-destructive way and allowed me to unify her with the background in a way that was quick and easy to do. 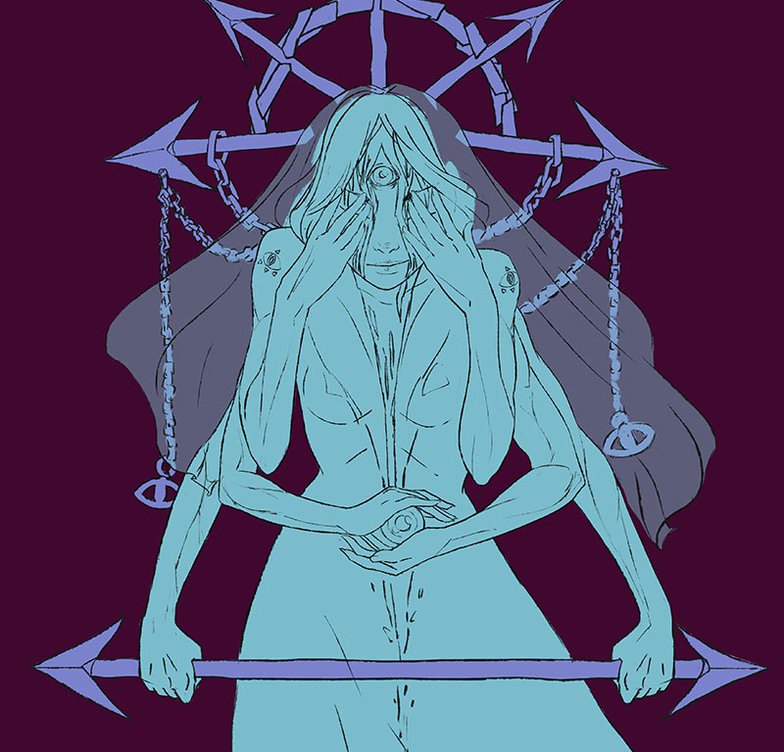 Saving out masks at the start of a painting can be handy later on.

Despite having carefully chosen my color palette in the beginning of the painting process I reached a stage where I really didn't like it. The colors weren't bad, but they weren't achieving the tone I wanted anymore.

Adjusting colors late on in a piece can feel a bit risky and it can be easy to make the colors very muddy and lose a lot of the subtleties that you've already spend hours painting. The best way I've found to avoid this is by using Gradient maps instead of Level Adjustments.

Gradient Maps can be found in the Adjustment Layers in Photoshop. It's worth noting that you can apply masks and Layer Modes to them as you would with any other Adjustment Layer. The way a Gradient Map works is that it maps the highlights and shadows of the image to each end point of the gradient color spectrum you have selected and fills the midtones to the gradient in between. I've set my gradient map to Color in the layer modes and have the opacity down to 33%. This changed my color palette from neons to something nice and dusty, giving me a good starting point for the new direction I wanted to move in. 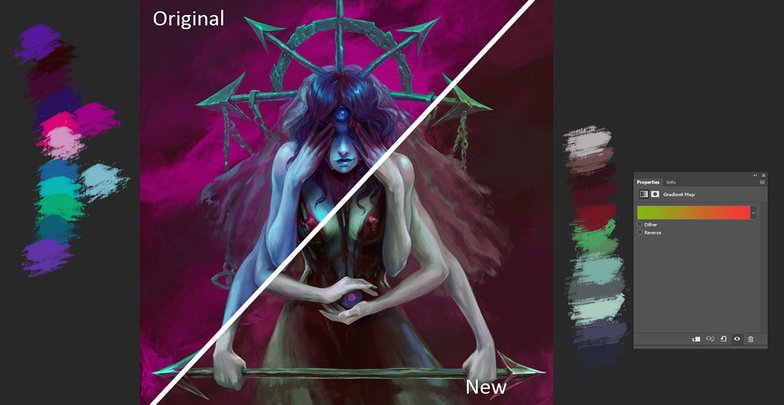 Lastly, I wanted to talk about details. How much and where you choose to refine your painting is an excellent way to guide the viewers attention to areas of interest. I've chosen to refine the face more than anything else here, using soft brushes and small brush strokes to add delicacy to her features. The hands closest to her face are the next most refined areas, with the rest of the painting becoming increasingly more rough and textural. I'm using brushes that simulate oil paints for the wider image as the texture of the brushes blends colors together beautifully and add interest to unrefined areas. Not everything needs to be polished if it reads well from a distance as most people will not look at the image in that much detail.

Guide viewer’s eyes by refining key areas instead of working up the entire piece.