In this tutorial, Gina Nelson takes you through the process for painting various types of damage to skin and flesh, with helpful hints and tips to achieve a realistic look quickly

In this tutorial you will learn some tips and tricks for painting a couple of types of damage to skin. We will be looking specifically at bruising, bullet wounds, and different types of scarring. I am using the latest version of Photoshop, but you should be able to apply these methods and techniques in any other digital painting software. It is also essential that you have a drawing tablet of some sort, I am using a Wacom tablet.

Please note that I am not using any custom brushes in this tutorial and that everything shown here should be achievable with a basic chalk and airbrush which you should have available to you in any digital painting software.

Whether you are creating textures for zombies or illustrating a character who is injured, bruises are useful to understand because they will most likely appear anywhere where damage to skin or flesh has occurred, which is certainly something we see a lot of in digital art.

The first thing to note about bruising is that they are made up of many different colors. The color of a bruise signifies its age and can tell you a lot about what caused the bruising to occur in the first place.

A bruise is always made up of many different colors

To create this bruise I used one of Photoshop’s legacy Chalk brushes with some Scattering applied in the brush settings. You can probably use any textural brush to achieve the same look. The main thing is to use a brush that’s not too smooth as bruises are caused by capillaries bursting underneath the skin, and because there are likely to be spaces between the capillaries that have burst, we want to create a dappled or textured look. 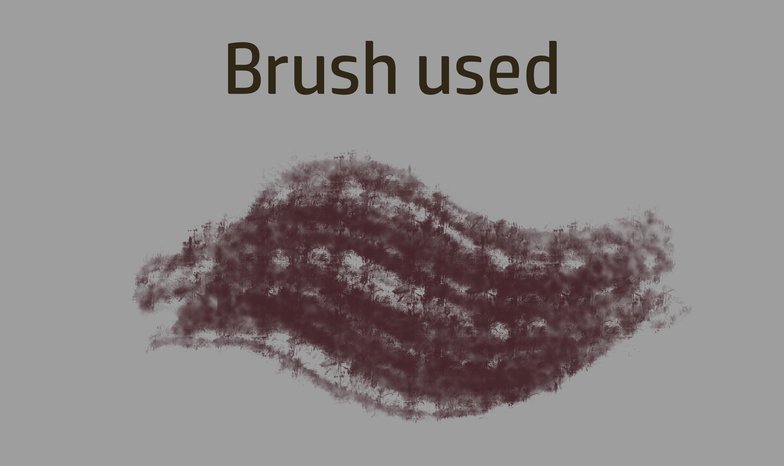 I am using a chalk brush with scattering applied

Life cycle of a bruise

As time goes by the color will change from pink to a deep purple or bluish color (due to hemoglobin). While healing, the body starts breaking down the hemoglobin. The separation of amino acids and iron in the hemoglobin is what causes the bruise to change color from purple to brown-green. The final stage in the healing process results in the bruise turning yellow, and is caused by the formation of an enzyme called Bilirubin. This eventually fades once the bruise is fully healed.

Often you will see a bruise containing all of these colors as different areas of the bruise may be at different stages of the healing process. This is usually to do with the severity of the injury at that point. So if you can imagine being hit on the arm with a rock, the point of contact will be where the most damage occurred, and that point will likely have suffered the most bleeding and therefore take the longest to heal, while the outer areas will heal up much faster. Because of this, it's very common for a bruise to be purple at the center and then yellowish on the outside.

You can use this to help describe the type of action that caused the bruising. For instance, bruising from strangulation might show a hand print in purple around the victim’s neck with lighter bruising towards the outside, and so on. 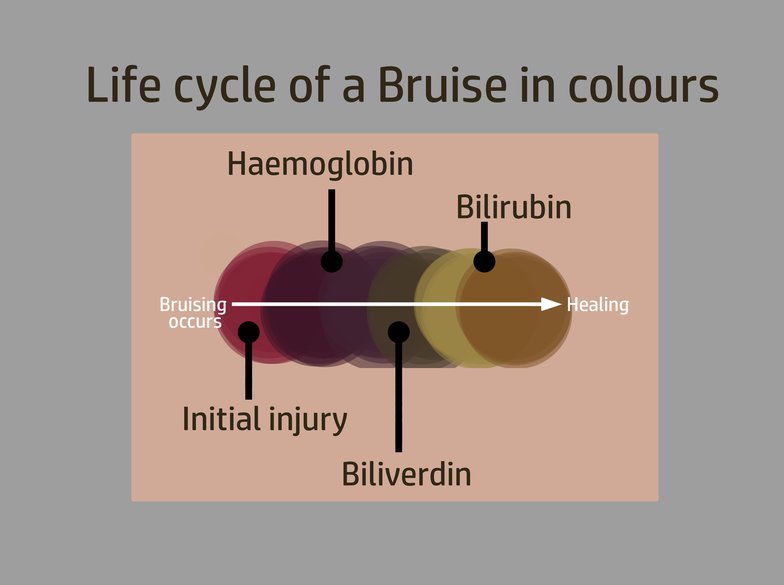 Most bullet wounds will have both an entry point and, if the bullet passed through its victim, they will also have an exit point. These wounds are quite different from one another, and you can use this to help with the narrative you are trying to convey, such as if your character was shot while running away.

For this I have again used one of Photoshop’s legacy Chalk brushes with some Scattering applied in the settings. I am also using a standard airbrush without any additional settings applied. 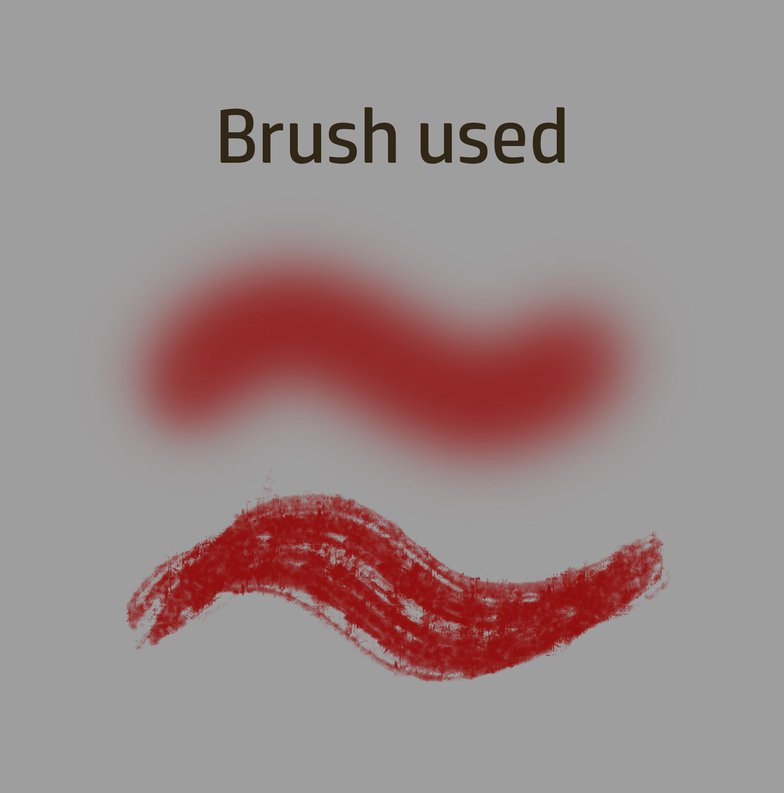 I am using a Chalk brush with scattering and an airbrush

Bullet entry wounds tend to be very clean with minimal bleeding as the bullet (obviously depending on the bullet, but generally) pretty much stops the bleeding while it’s passing through. You might even find that some bullet wounds don’t bleed at all unless the bullet passes right through and leaves the body. These wounds will tend to be very dark at the center where the blood is thickest and pooling, and will be quite light around the edges. You will probably also see some swelling around the outside, and probably some bruising if the wound isn’t too fresh.

Bullet exit wounds, unlike entry wounds, can be quite messy. The skin and flesh will appear torn around the edges and the wounds might seem quite severe. Exit wounds will often have large skin flaps that protrude from the wound from where the bullet forced its way out, and these may be accompanied by tears that can be either small or very large. You will also often see blood splatters around an exit wound from where the bullet pushed through.

There are several different types of scars but the three most prominent which you are likely to use in drawings and textures are; fine-line scars, raised scars such as Keloids and Hypertrophic scars, and sunken/pitted and Atrophic scars. Each is quite unique and different in appearance and can be used to add a greater sense of depth to any character because scars tell a story of things that have happened to us in the past.

To achieve a generic texture that simulates scar tissue, I am simply using repeated angular lines of various colors. Even the specular highlights on the scars use the same angular lines. As with the previous images, I am using a standard Chalk brush with some Scattering applied here. 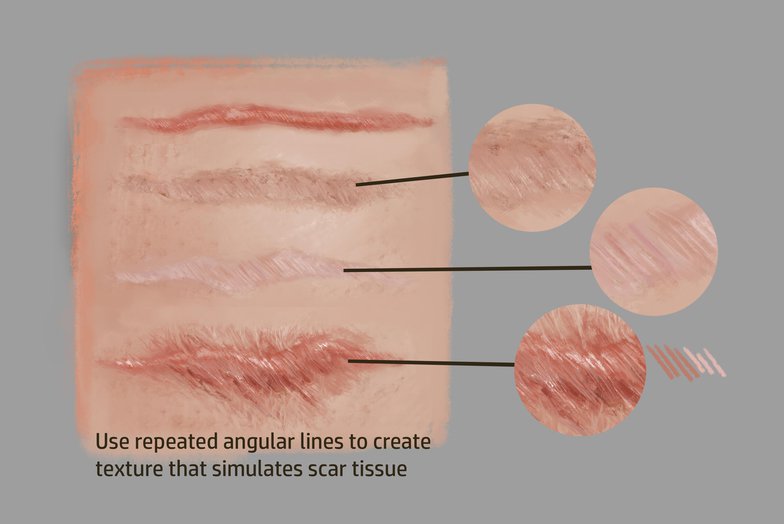 Use angular lines to achieve the look of scar tissue

Raised scars are raised above the skin and occur when our bodies produce too much collagen at the site of a wound, causing an excess of tissue. This build up can continue for several months or in some cases even years!  In Hypertrophic scars this tissue stays within the confines of the wound, but with Keloid scars the tissue overgrowth will extend beyond the boundary of the initial wound.

These are the most common type of scar and are generally caused by common cuts or minor wounds. Fine-line scars will tend to be flat and can appear quite pale or silvery. As these scars can be quite pale they might be more noticeable on darker skin tones because scar tissue does not tan or darken over time. When painting these scars you can color pick from the surrounding skin area and bring some of those colors back into the scar to help blend it with the skin and prevent it from looking “stuck on.”

These scars are most commonly found on the face and tend to be as a result of acne or chickenpox. They will generally appear as several pits in the skin, giving the skin a bumpy sort of surface texture. These types of scars tend not to be shiny like the other types and will often even just assume the same color as the surrounding skin area.