Clonerh Kimura's love of sci-fi, girls and guns fueled the inspiration behind his image, Journey. He guides us through his thought process, from the early stages to the finishing touches of his illustration...

Sci-fi, girls and guns are just some of my inspirations. I'm a big fan of many things, but Japanese animé, comic books and sci-fi movies are my principal inspirations. Amazing pieces such as Akira, Ghost in the Shell, or, on a different note; Stars Wars, Aliens and Blade Runner have had a massive impact on my life. My image Journey is a kind of personal tribute to all those pieces.

In the last year or so I've had the chance to create concepts and design characters after spending a lot of my career as a colorist. I've never considered myself to be a good line artist, but what I do is exploit my skills as a colorist, and use them to create these kinds of pieces.

For anyone out there who has the same problem, this project overview could be very useful, even though it only scratches the surface. I hope you enjoy it as much as I did making it.

Well, let's get started! The first step is very simple, but very important. I make a quick sketch with the pose I want my final character to be in. Normally I make four or more sketches until I find the best one. In this step it isn't necessary to use references, just try to make as many sketches as you can. In my case I wanted something simple, but badass, so I chose this simple and effective pose.

A series of initial thumbnails

Now, in this step, many people try to define the character with trace and that's good, but not in my case as my skills in line art aren't as good as they could be; it would be a waste of time to do this. So the only thing I do is trace the areas that I think will be more useful when I paint. Even though at this point I know exactly what the final result will be, you can always modify anything you want during the process. 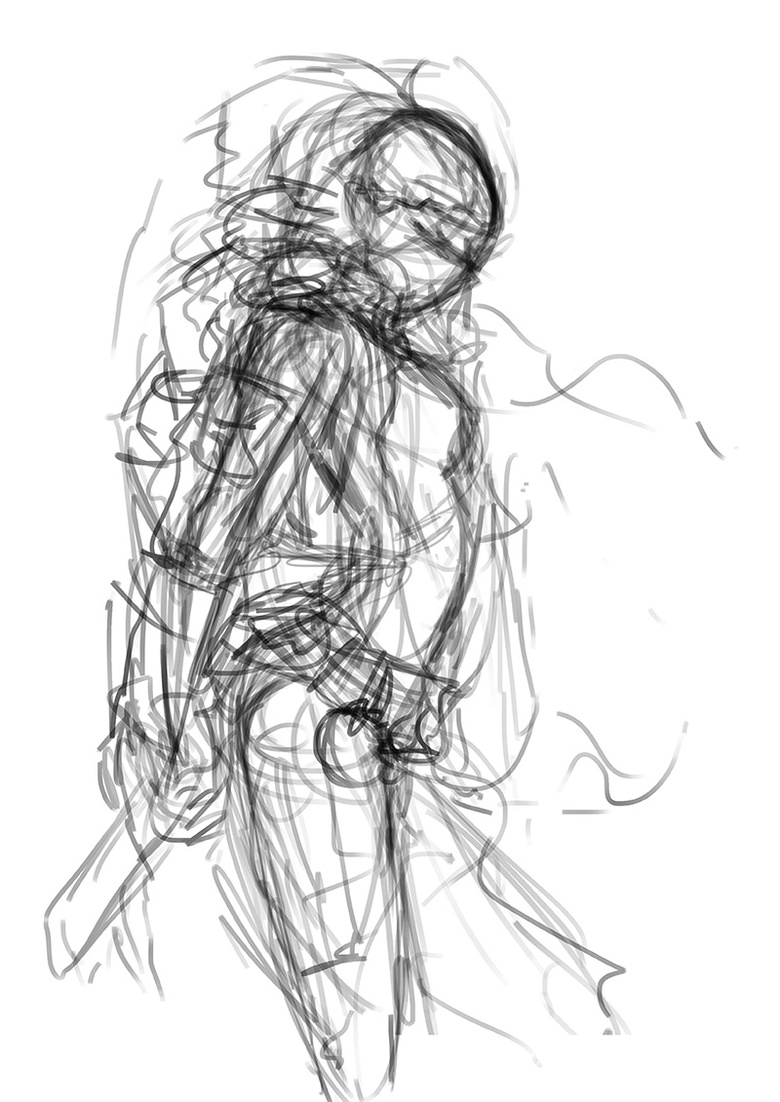 Defining the outline of the character

This step isn't important, but I wanted to show it. At this point I was still modifying ‘trace'; I even added some more elements, like the helmet, and gave it more shape in the silhouette – as well as adding shadows and marking some of the light areas. Up to this point, I hadn't spent a lot of time on the illustration; in the case I don't like something I can return to the beginning without wasting a lot of time. 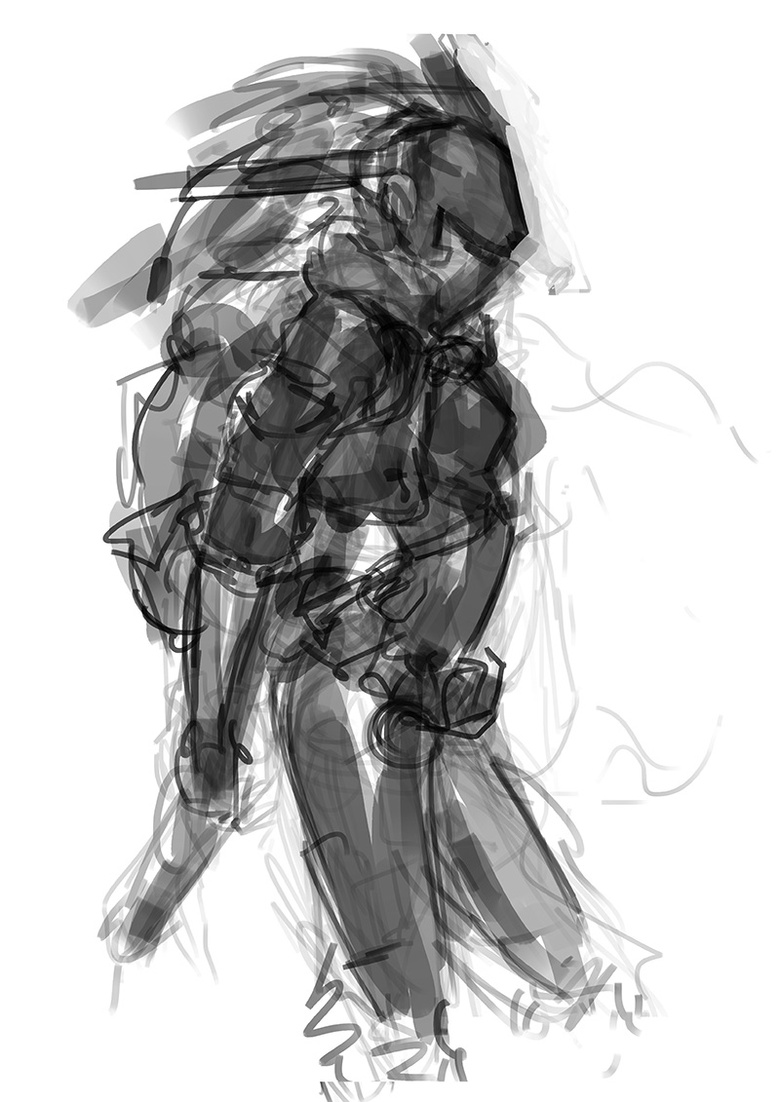 Taking the sketch further by adding some highlights and shadows

Here, I started to define more things. Basically, I started to paint with gray tones. Why? Because of time; I sometimes paint directly with the color, but mostly I use the grayscale in my process for two reasons. The first one is because it takes me less time, and the second is because it's easier to notice where the hardest shadows are and where the brightest points are. In other words, I start to define the character's volume from this point with the gray.

I modified some things by cutting and pasting, which is very simple, keeping in mind that we still haven't added details yet.

The following two steps are the most important in my process, because at this point I define just about the whole picture. Principally, the face is the area I always start with and it's always where I spend most of my time.
Here the use of references are important. Most of my references were for the face, body, and the jacket. For the back-pack, the helmet and the utility belt I didn't use any references. Here it is convenient to spend a little more time adding all the elements that you think are necessary.

Now it's time for the color. Before looking at the details, I added a Color layer and adjusted the Color Balance to add a blue tone to the grays; this is of course optional – I did this because I didn't want to keep that grayscale tone. 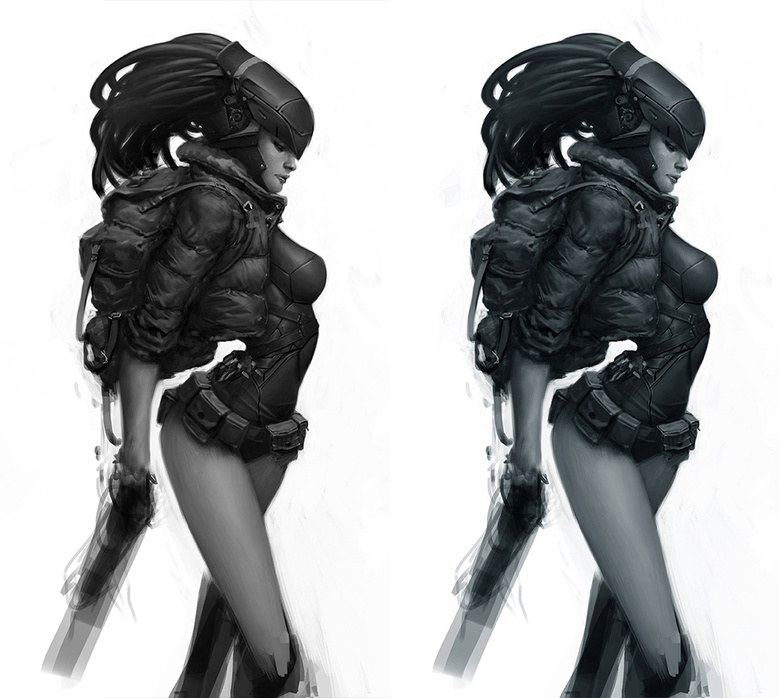 Adjusting the colors to achieve a blue tone

Then I added the rest of the color. Simply put, in a new layer with the Overlay mode on, I started to add the skin tones (mixed with blues, greens and reds to achieve a more natural skin tone). I added some brown and green tones to the bags and backpack, and yellow to the helmet. Everything else stayed the same as the previous step.

This is another reason why I used gray tones at the beginning; because I can play with the colors more and try
different options.

From this point on I've finished with the creative part to focus on the details. My recommendations for this step are to use all the references and textures that you need, a long playlist and a lot of patience. Just for the record, I don't usually use many textures based on photographs, but in this case I did. The advantage of using photographs for textures is that you save a lot of time, and if you use them correctly your illustration will look fantastic.

Here I used some textures for the screws, the buttons and the gun. I retouched over the gun to integrate the illustration.

I didn't want to focus on the details too much, but I'll show you just a couple of things that I think are important. The first thing is the helmet; it doesn't really have many details and in the example I made there is a sample of basic lighting, and in the last sphere I only started to add details like scratches that age the materials. Almost all these details were done by hand, because it's a fast and simple process.

In fact if you want a detailed tutorial I made a tutorial about aging materials in Digital Painting Techniques: Volume 5.

Another thing I wanted to do with the helmet was define the edges. After trying a few things with little result, I decided to use my last option of using the Pen tool. It was my last resort, as I don't have a lot of experience using this tool, and I wasted a lot of time doing so, but I have got to admit that it's a very useful tool.

I made a cylinder and I colored it the same as the spheres. Afterwards, I added another pipe behind the first one and cast the shadow over the pipe; it's that easy! 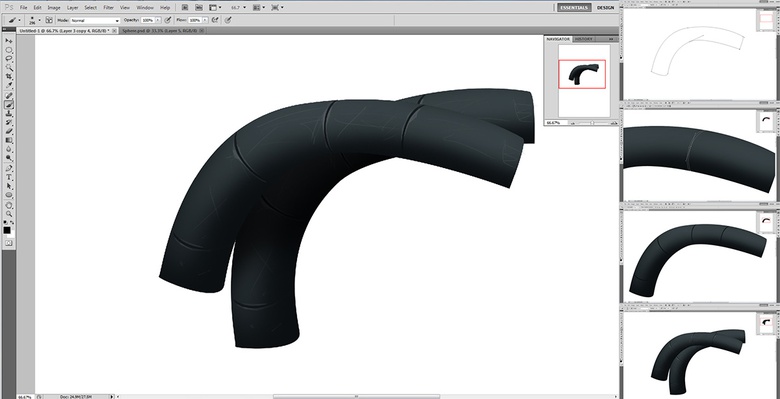 Cylinders created with the same lighting as the spheres 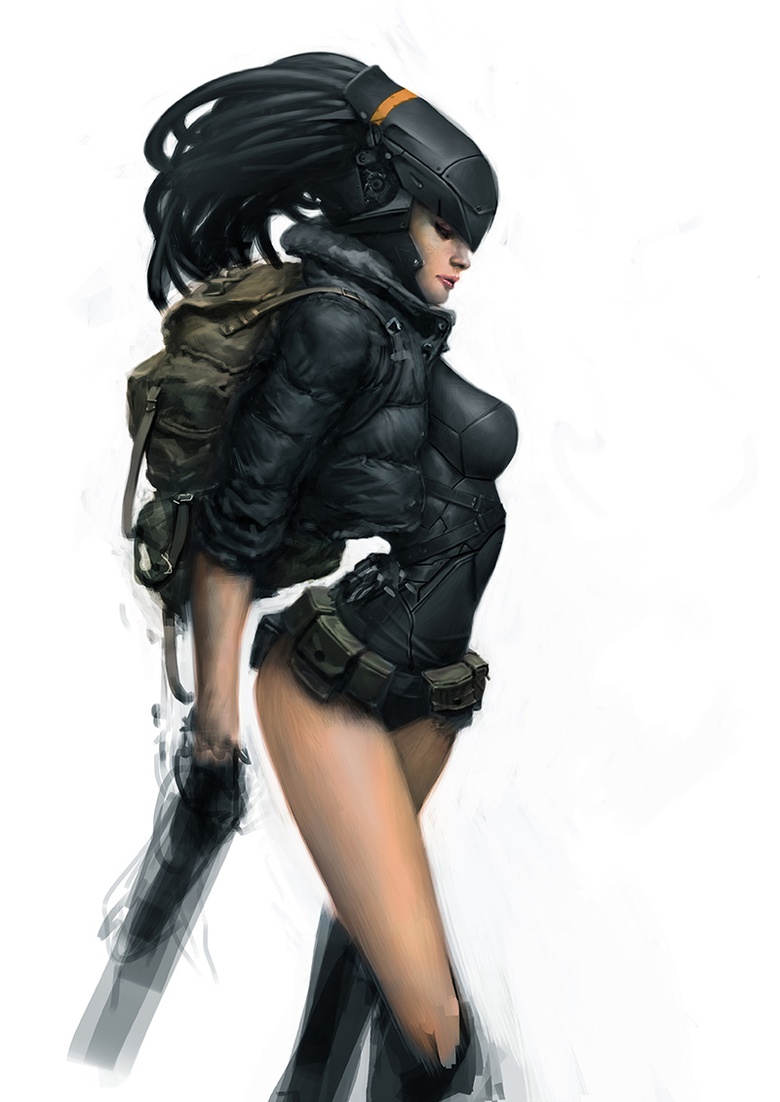 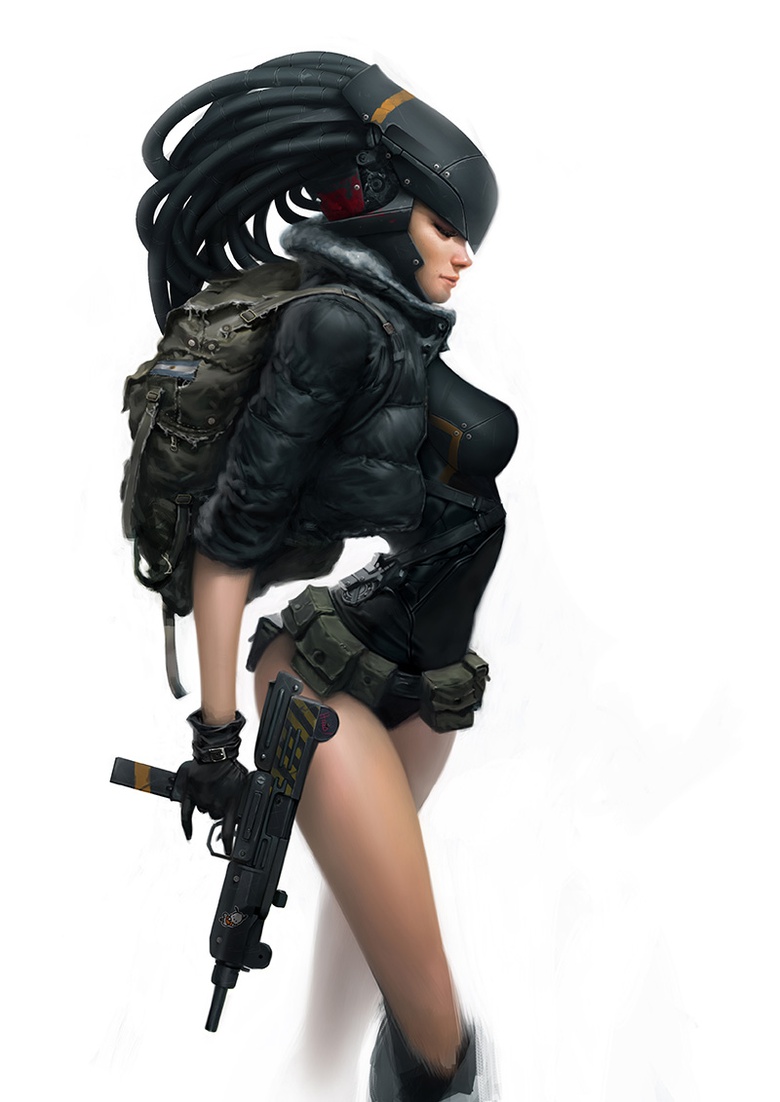 Defining the outline of the bag and helmet

The illustration is almost done at this point, but first I wanted to add some final touches. In my personal pieces, I like to add references that have important meanings to me – others are just for decoration and fun. This is a perfect time to get rid of some stress and have a little fun adding some little details to the illustration. 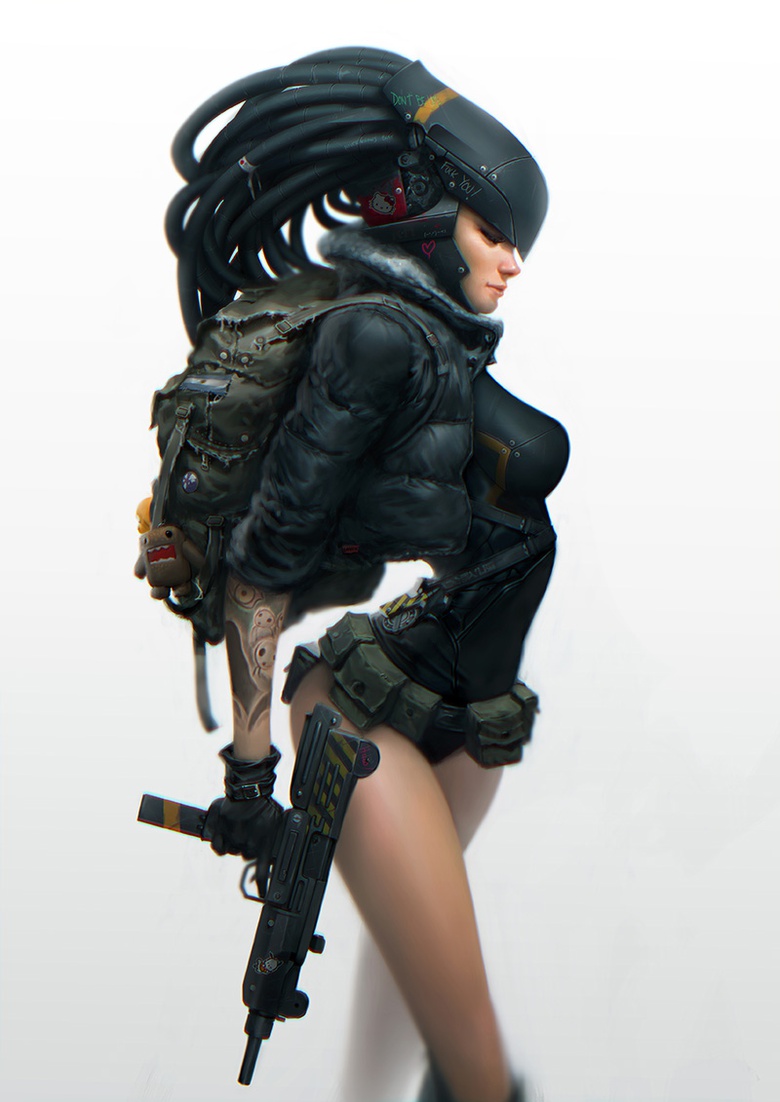 This is the time to make any final adjustments, and where the color balance, the saturation and the level adjustments come into play. The only thing that I can say here is spend as much time as you need on these three aspects, until you get the correct balance for all of them.

Once I have all of this, I play a little bit with the channels, but I don't recommend it, as the illustrations can lose definition. This was a common mistake when I started, and I see the same mistake in a lot of artist's work. So play with the channels but don't over-do it!
In this case, I added some Blur in the Red channel and that was it! The illustration was finished!

This project overview is to give you an insight to how I work, and I hope you can find something useful in it that you can adapt to your own style and make something totally different and amazing! 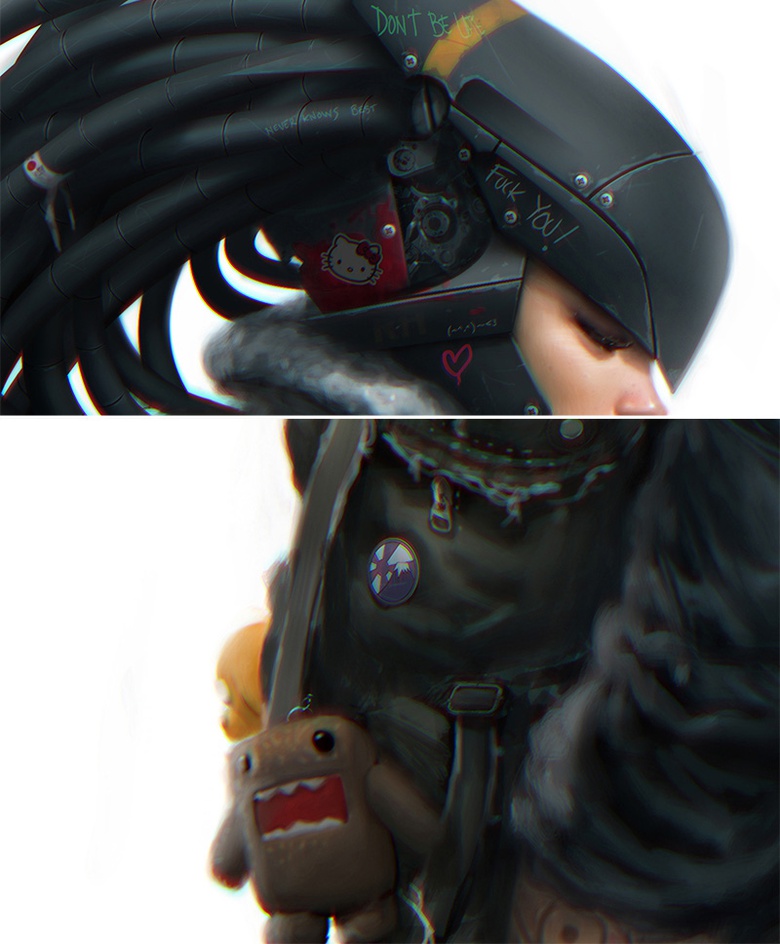 Close-up of reference details added to the helmet. 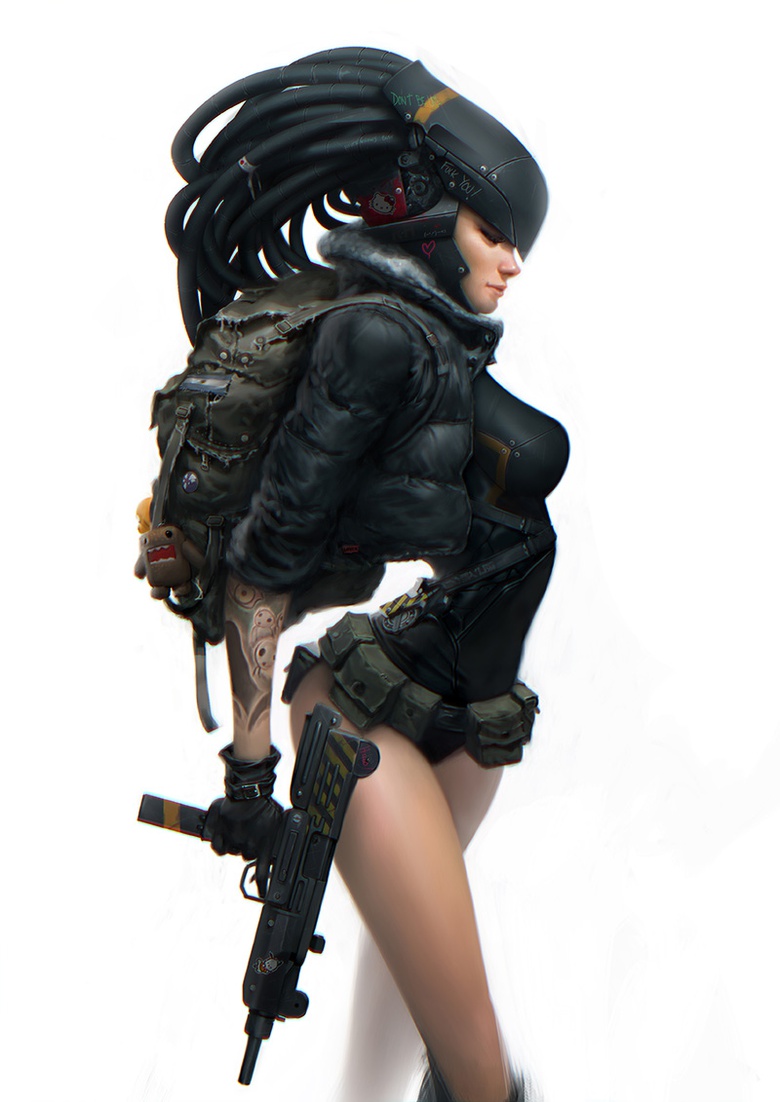