Matt Dixon demonstrates how to turn a brief into a cool creature concept! 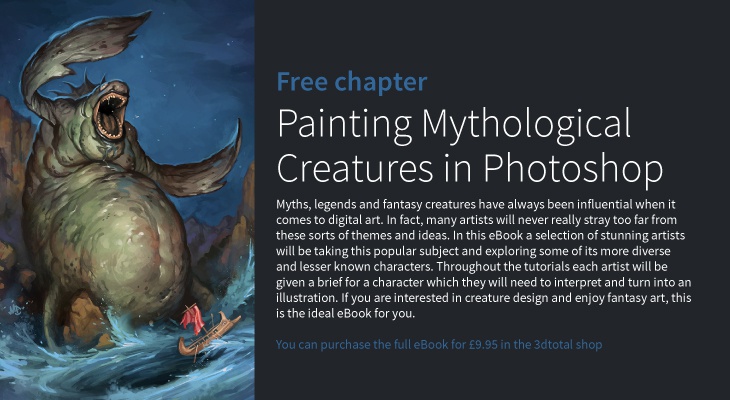 Matt Dixon demonstrates how to turn a brief into a cool creature concept!

In Greek mythology, the Charybdis or Kharybdis was once a beautiful naiad and the daughter of Poseidon and Gaia. She took the form of a huge bladder-like creature whose face was all mouth and whose arms and legs were flippers, and who swallowed huge amounts of water three times a day before belching them back out again, creating whirlpools.

This is a well-balanced brief. It provides some background for the creature, a partial description of her physical characteristics and explains what she does without giving unnecessary detail. Everything needed for a solid design is there, but there's plenty of room to be creative and have fun.

Before picking up a pen or pencil, it's a good idea to take a little time and dissect the brief. Identify the different elements provided and how they might impact on the design of the creature.

Naiads are graceful and beautiful water nymphs. Perhaps some aspect of this past form could be evident in the final design? This could manifest physically or maybe as a mood or emotion - for example, sadness at her lost beauty or anger at her transformation.

Poseidon and Gaia are significant figures in Greek mythology. Though Charybdis is more obscure, her parentage would suggest a powerful character. 'A huge bladder' does not immediately suggest a particularly interesting creature. A giant balloon with fins stuck to it would be a very lazy design, so care must be taken to avoid this route.

Some indication of whirlpools and Charybdis belching or swallowing water should be seen in the finished illustration. This also poses a possible problem as large amounts of water entering or leaving the creatureâ€™s mouth could obscure large parts of her body.

The first step in any design is always to find a starting point. Choosing where to begin and why will set the tone of the entire design process. They key visual attribute of Charybdis seems to be the idea of her being a huge bladder-like creature and this will need to be obvious in the final rendering. It seems that there are two ways to approach the design; either to start with a bladder-like shape and try to add design elements or to use other elements of her description as a starting point and try to develop the design from there.

Though some kind of bloated beast is inevitable, I'm concerned that using the bladder shape as a starting point will limit design choices and result in an uninteresting creation. Beginning at some other point and finding a way towards a final design forces intelligent and deliberate choices, which tend to give more depth to a concept. That seems the more appropriate choice in this case.

To me, the most appealing element of the description of Charybdis is that she was once a naiad. This sharp contrast to her current form is interesting, and the transformation from beauty to beast seems an important part of the creature's story and possibly suggests her personality. Narrative elements, however subtle their manifestation in the final design, are always fun to explore and tend to suggest greater depth in a design than visual cues alone. They also help an artist to connect with their creation as a living thing rather than a collection of two-dimensional shapes. With this in mind, I'll begin my design of Charybdis with a rough sketch of how she may have appeared as a naiad (Fig.01). 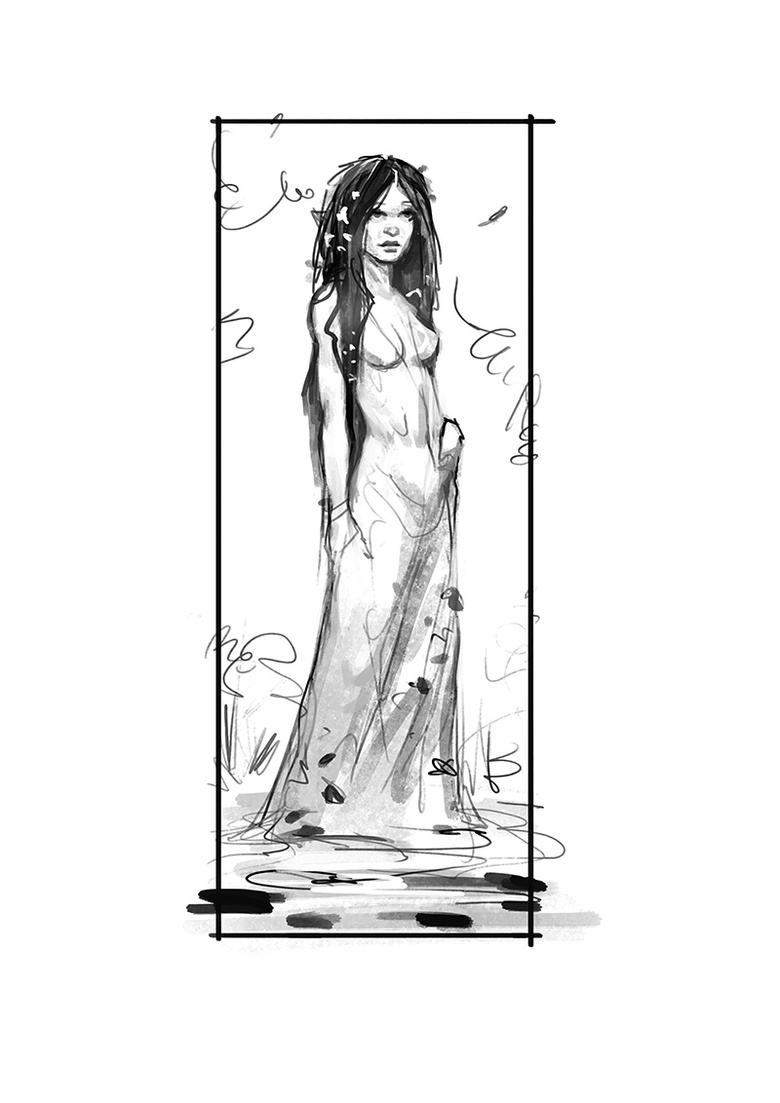 Using this image as a starting point I can start to consider how she may have changed into the creature described in the brief. I can explore different ideas by mutating her humanoid body. This evolutionary approach to design will generally spark more interesting thoughts than leaping straight towards the end result and, in my opinion, is much more enjoyable!

Initially I'm just concerned with the principle shapes and establishing an overall form that is pleasing to the eye, while satisfying the requirements of a bladder, flippers and a face which is all mouth (Fig.02). 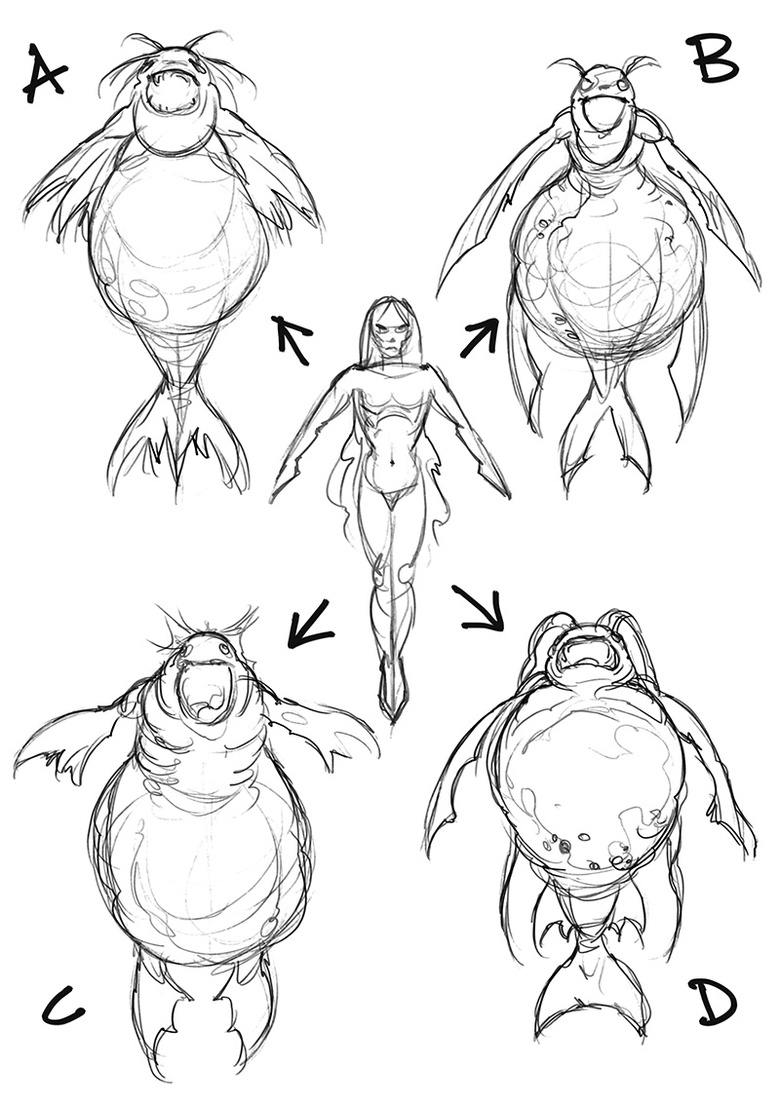 First sketches should be quick and loose. A speedy exploration of ideas is more important than detail at this stage. Consider how the transformation to sea beast may have occurred. Did her legs fuse together into a tail? Which part of her body grew to become bladder-like?

Analyze the first sketches. Even if the designs are broadly similar, one or two will usually feel more successful than the others when viewed side by side. Try to understand why a particular design is appealing as you choose which to develop further, as those aspects should be built upon in the final image.

Rough C is my choice to work up. I feel it has the best balance between the bladder-like shape and humanoid elements. The suggestion of shoulders and the indication of an upper torso above the bladder are familiar anatomical elements that help to make the connection between this creature and a naiad.

Now the rough sketch can be worked up to add definition and details. Again, keep things free and fluid. Try to justify all decisions and keep shapes consistent so the design has a consistent flow. Choose a neutral pose for this stage of the process: a clear view of your creation makes it much easier to concentrate on the design without the distraction of foreshortened limbs or obscured body parts.

In keeping with the evolutionary theme of humanoid to beast, I'm imagining Charybdis as an aquatic mammal similar to a whale or walrus. That suggests a tough, blubbery hide, which seems a suitable match for her bloated shape. Adding damage and texture to her body will give an impression of age and make her appear more monstrous (Fig.03). 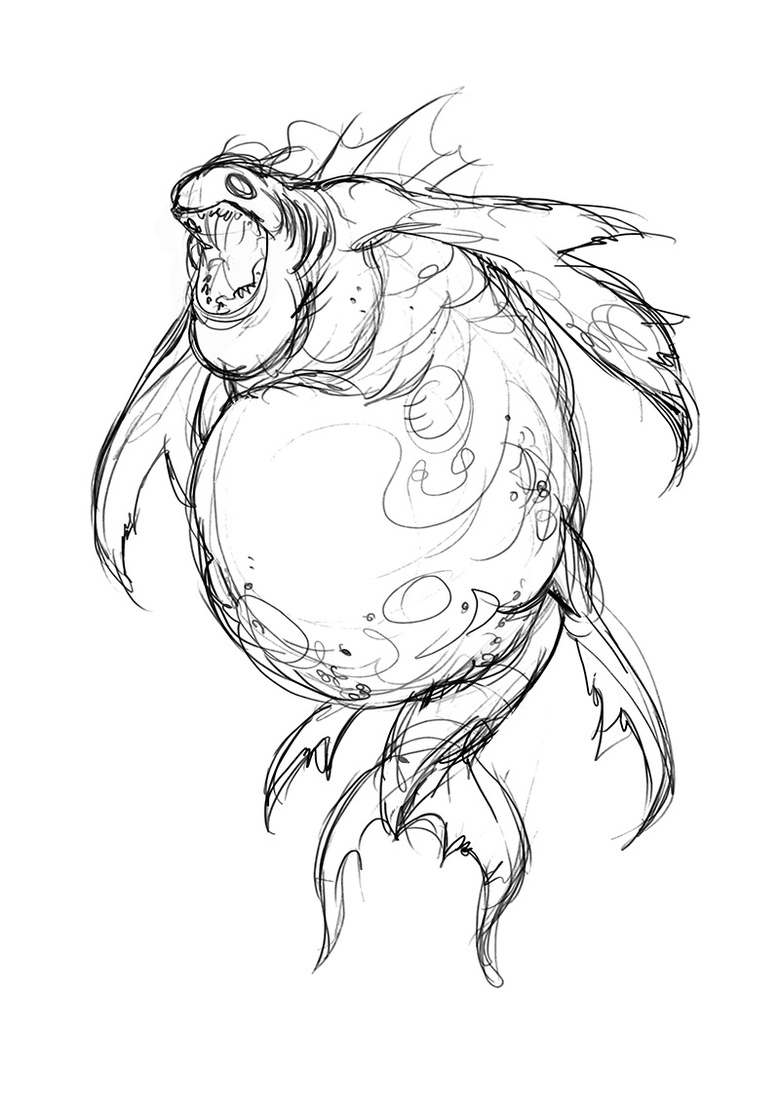 With the basic design complete, Charybdis is ready to be presented in a final image. Refer back to the brief and first thoughts to consider how she should be portrayed. Are any elements of the brief not clearly shown in her design that could be emphasized in the finished illustration?

In my final image, I want to establish Charybdis as the huge beast described in the brief. Including objects to act as a scale reference is the best way to do this. A vessel teetering on the lip of a whirlpool seems a good choice as it will add a sense of drama and peril in addition to showing the size of the creature.

To further emphasize the scale of Charybdis, I'll show her rising out of the sea and set a low viewpoint. This will give the impression that the viewer is looking up at the beast, suggesting that she rises high into the sky. Placing her out of the water also allows for a better view of Charybdis. Including the jagged cliffs of some inhospitable island in the background will also help to define scale.

Set up the basic composition with simple shapes to begin with as this will make it much easier to find a balance. Try to deal with the image as a whole rather than focusing on any single aspect (Fig.04).

Once a simple layout is established, add details as necessary (Fig.05). 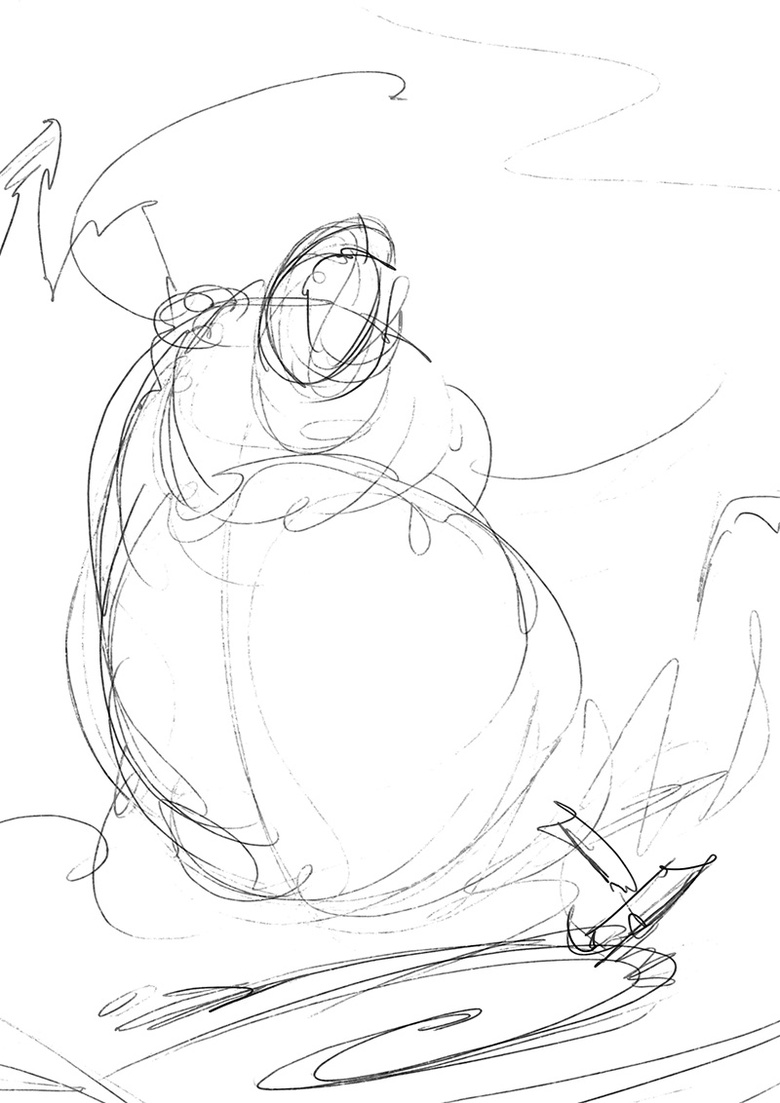 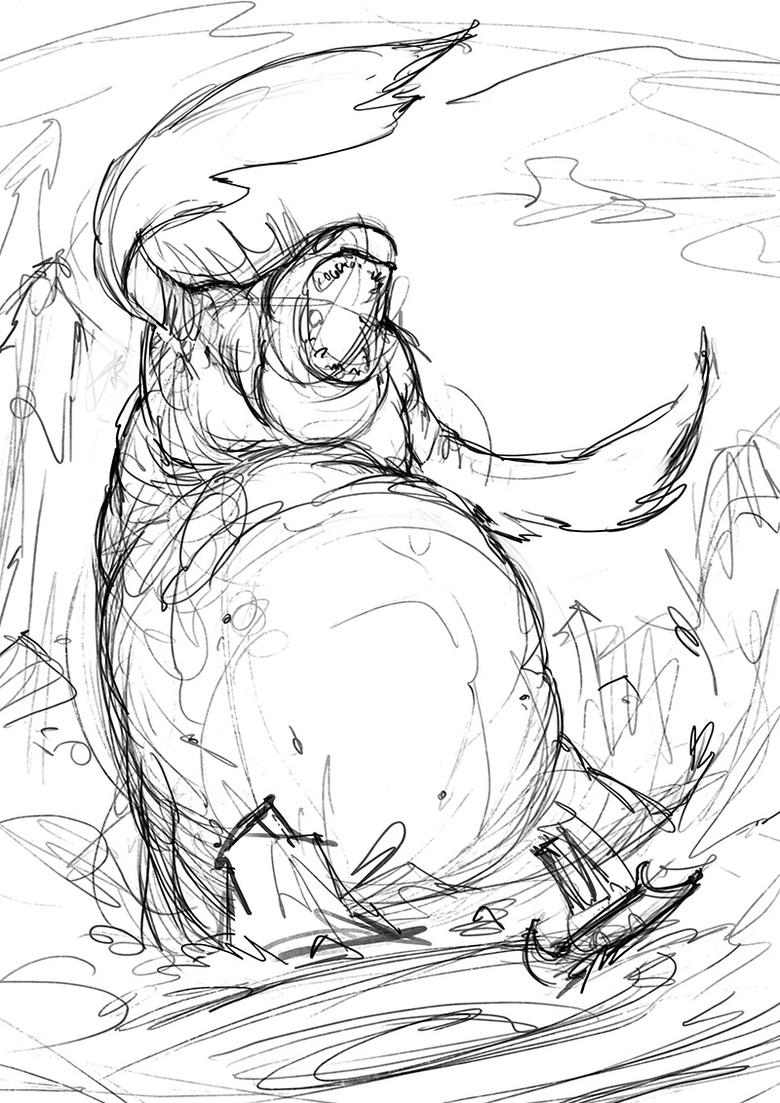 Next, consider values. Here is where the lighting and mood is set up. What atmosphere suits your creation best? Moody? Sinister? Melancholy? I want my final piece to be dramatic. A night sky should provide a good background for Charybdis, whose horrible bulk will be strongly illuminated against a crashing sea and tumbling rocks. Keeping the sky clear will help to suggest the maelstrom before her is her work, not stormy weather (Fig.06). 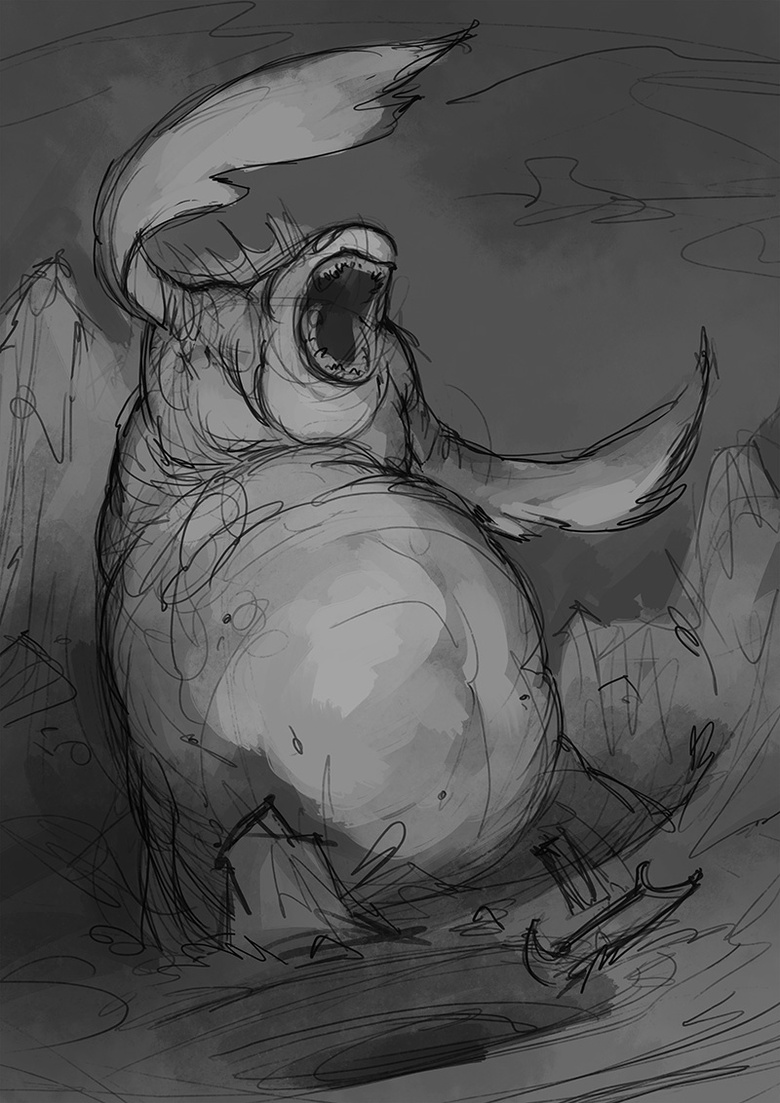 To quickly lay in values, I place the sketch on a new layer set to Multiply and work with a large brush on the layer below. Once a rough pattern of values is established, I flatten the image and work into it to add detail (Fig.07). 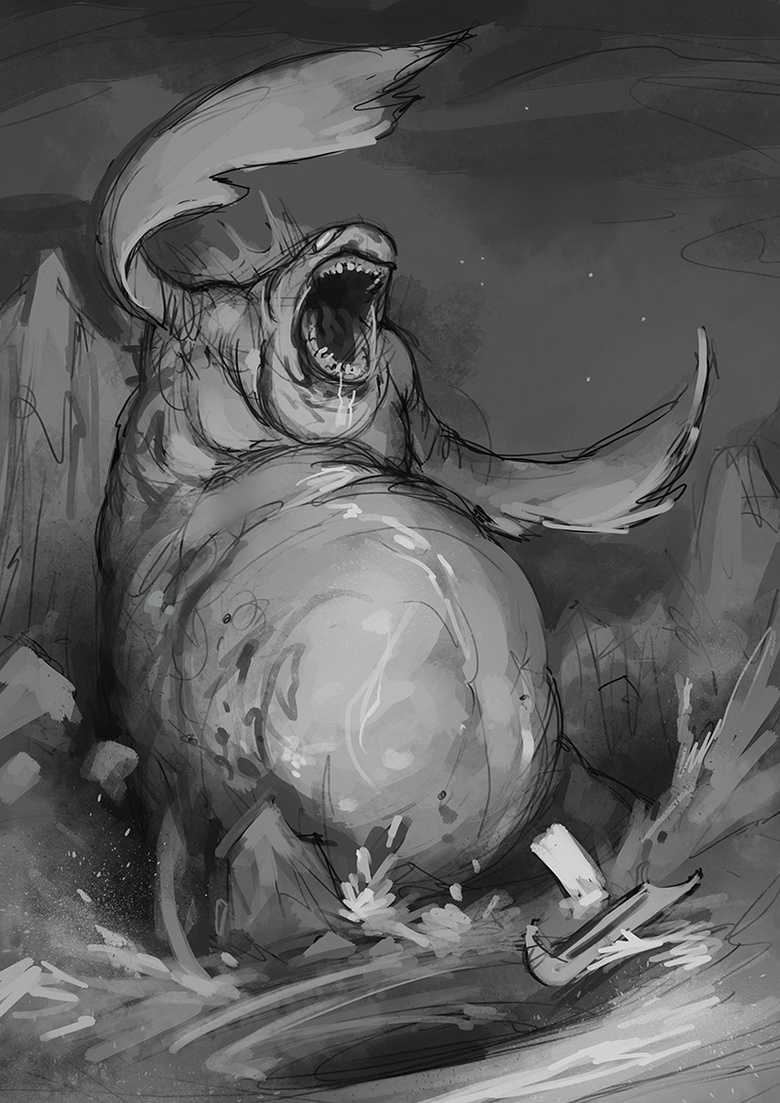 Think about the mood and lighting you have chosen for your final image. What color scheme suits this best? I have chosen a cool color scheme of blues and greens. These colors are traditionally associated with the ocean and should support the nocturnal setting well too. Some complimentary orange hues will also be included to add interest. Iâ€™ll also use a unique accent color to draw attention to the sinking ship.

I block in a simple color scheme the same way as I lay in basic values. The value sketch is placed on a layer set to Multiply and I work beneath with a broad brush and opaque color. At this stage, different portions of the image can be colored on separate layers so that adjustments may easily be made if necessary (Fig.08). 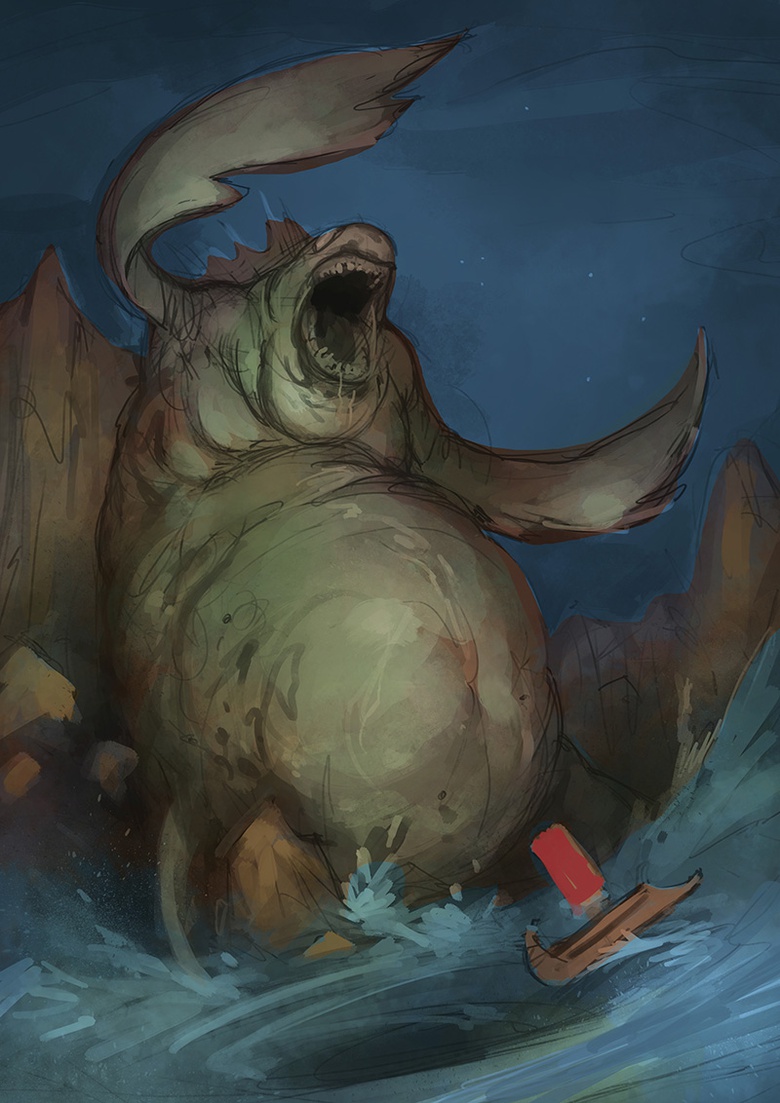 Once basic colors are in place, the image is flattened and rendering can begin. I color pick from within the image, working mostly from dark to light within the established pattern of values. I want to ensure the form and shape of everything in the image is well established before I move on to the next stage (Fig.09). 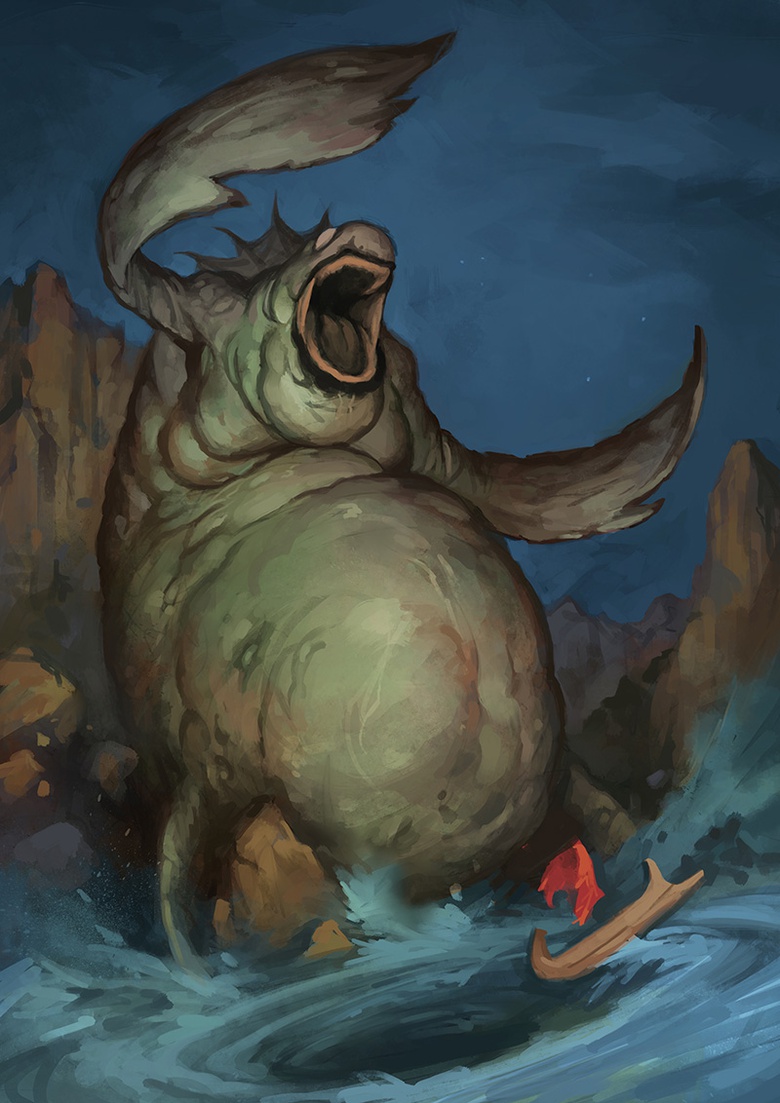 Details are next. Charybdis is huge: small details will help to establish the size of her body without breaking up the large, simple shapes that give her bulk and weight. Teeth help to pull the viewerâ€™s attention towards her head, while small details on the ship help it stand out better against the swirling sea (Fig.10). 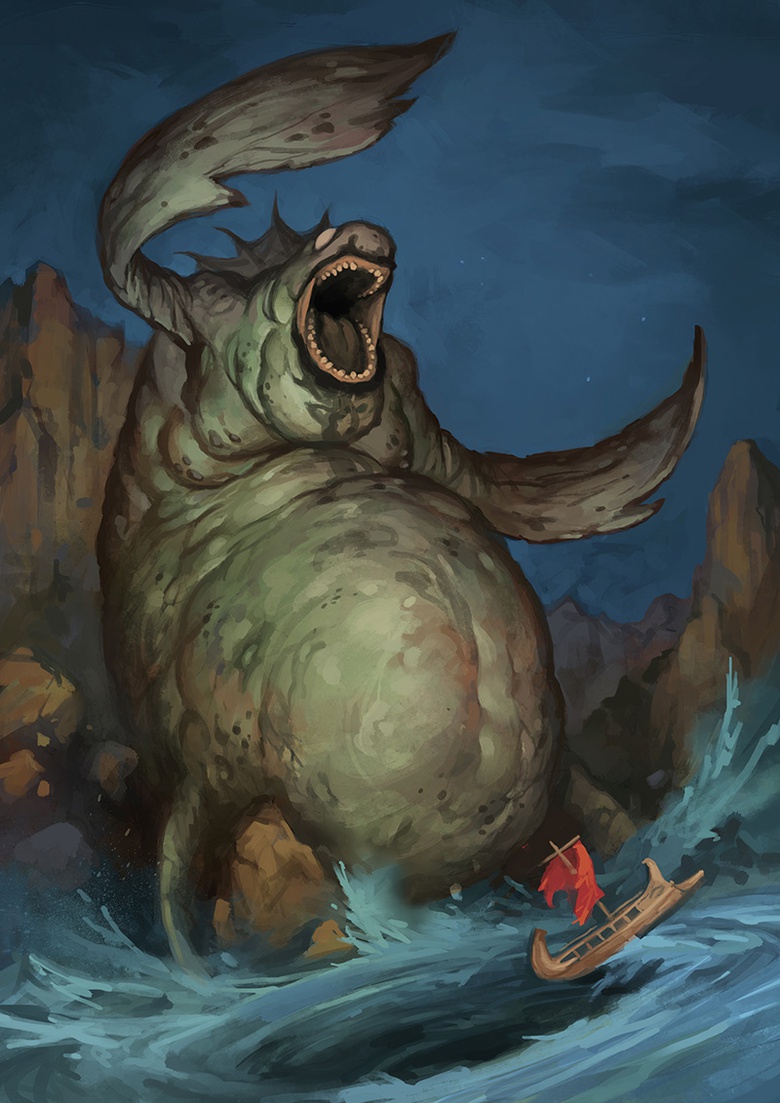 Some subtle secondary light from an unseen moon helps Charybdis to stand out from the background. The raging sea is created with a combination of deliberate marks and custom brushes made from a simple scanned paint splatter. Carefully placed, these splatter shapes are a quick and effective way to add energy to the water (Fig.11). 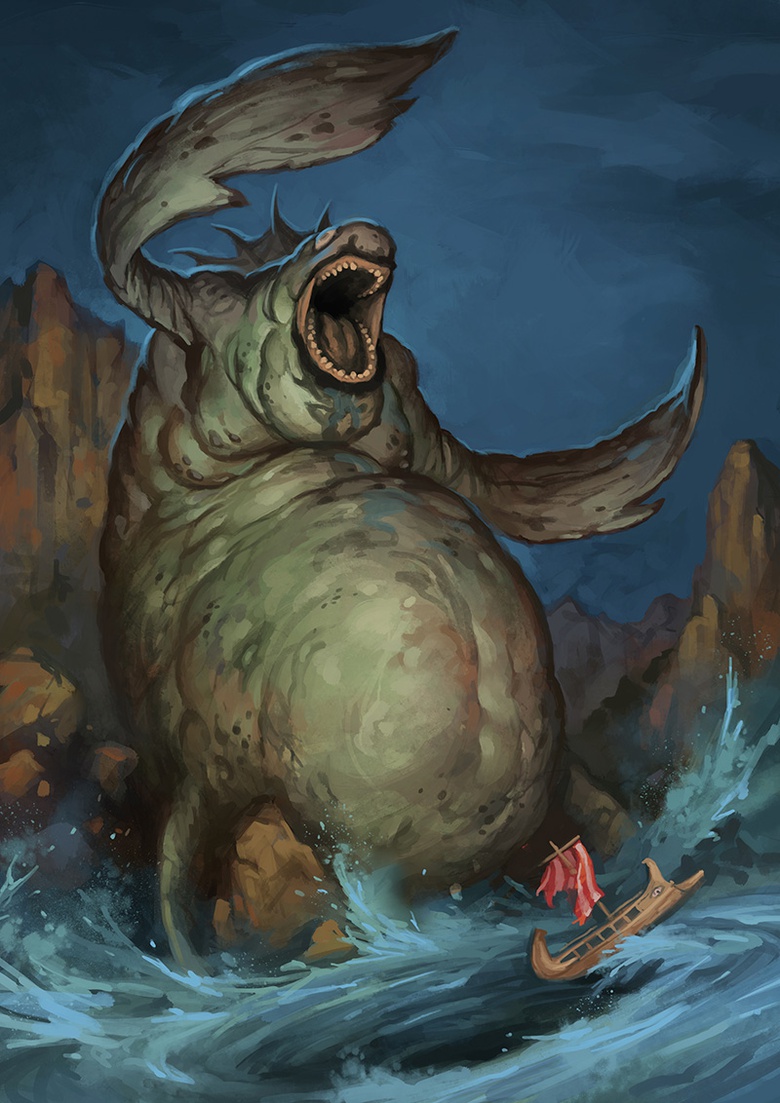 Some final detailing and the addition of some stronger highlights completes the illustration. At all stages of the painting, I'm working with the full image in view so I can see how working in one part of the piece may affect another. Working up the image as a whole, rather than tackling portions separately, is a good way to help retain the balance established in the early compositional sketches (Fig.12). 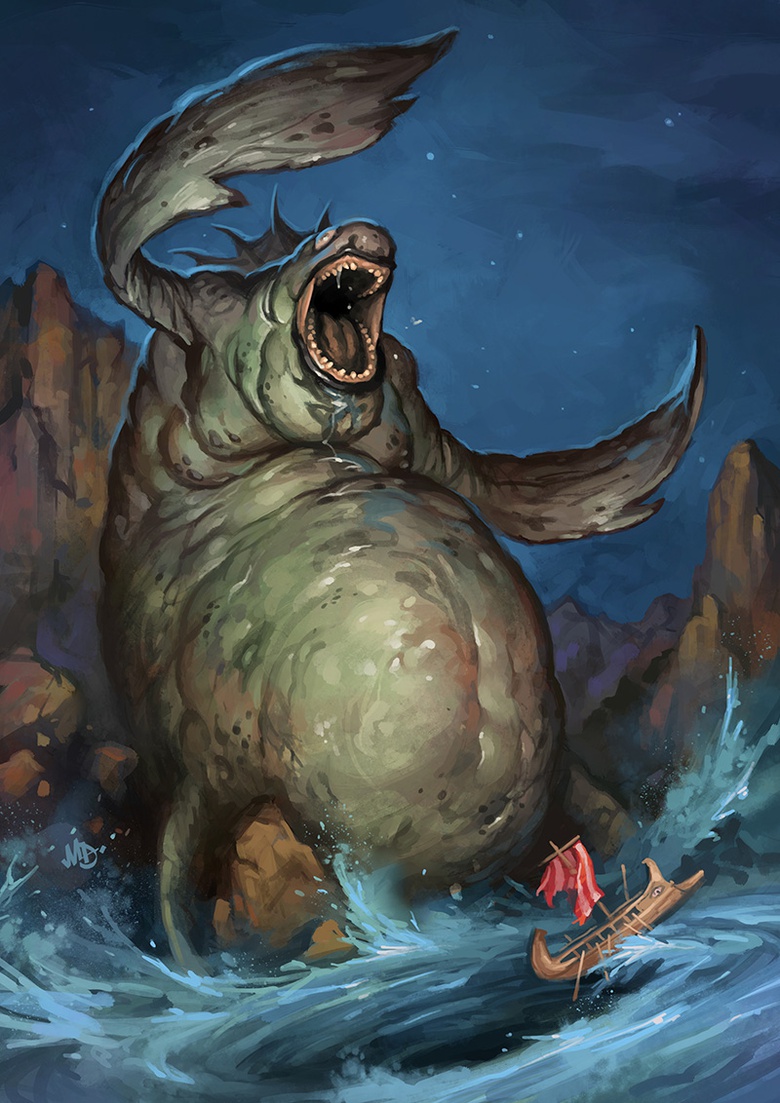 Look back at the brief to see how it compares with the finished image. Every piece of work is an opportunity to learn, so this is a good opportunity to be critical of your work. What works? What doesn't and what could have been done differently?
I'm satisfied with my final illustration. It has drama, I think the sense of scale is effective and I'm pleased with the idea of a clear sky to show that the raging sea is the work of Charybdis.

The creature design is consistent with the brief and I think there's just enough human anatomy in evidence to be able to imagine Charybdis as a raging leviathan, or a tortured soul bellowing with frustration at being trapped in her hideously transformed body. I'd be curious to know how different it would have been if I'd taken an alternative route. I guess the only way to find out is to go back and do it again!