Learn to paint a futuristic dock with Richard Tilbury in this sneak peak at chapter 2 from the Painting Futuristic Cities ebook...

The first stage in this tutorial was to do a little bit of research by looking at images of docks on the internet and of different types of ships. From the outset I wanted to create an image that had large sense of scale, namely because of the size of ships when viewed up close. Any large vessel has an imposing quality that is immediately impressive, due to the strong sculptural form and sheer size compared to the average person.

The grandeur of the early cruise liners was something that I had in mind when considering the type of composition and I decided that the eye level should be low down to emphasize the vast scale of the ship that would form the focus of the image.

I decided that I didn't want to stray too far from the general design of ships for fear that it would look unconvincing. Any waterborne vessel adheres to a few basic principals regarding the shape in order that it can effectively move through water and so given this long established tradition I thought it would be best to stick to it. I find that with any interpretation of a subject it is better to start with what you know and then modify it in order to create a more plausible concept.

Due to the low eye level I decided to build a simple ship shape in 3d to give me an accurate starting point with regards to the hull in perspective.

Fig.01 shows the basic shape that was created in 3d. 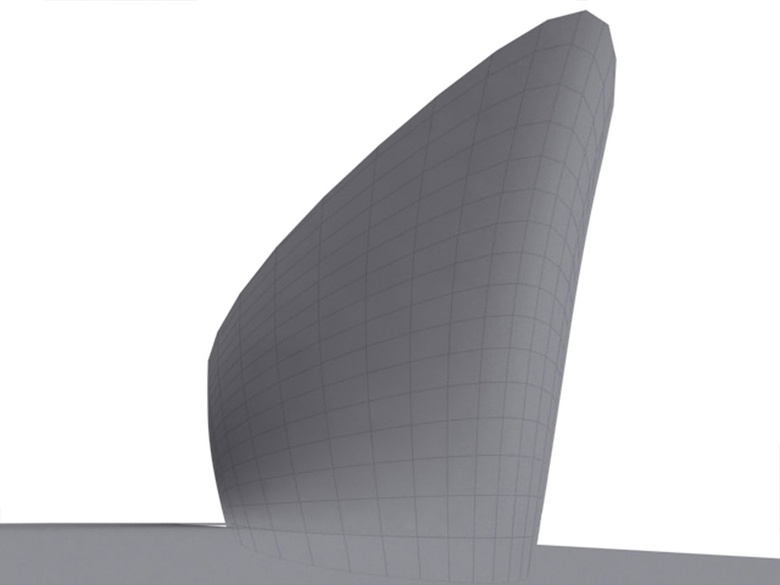 I then added in some perspective lines to act as a guide and a framework along the left which will serve to create depth in the scene. This device of repeating a motif or shape can be used as a gauge to measure scale and perspective in a scene. (Fig.02) 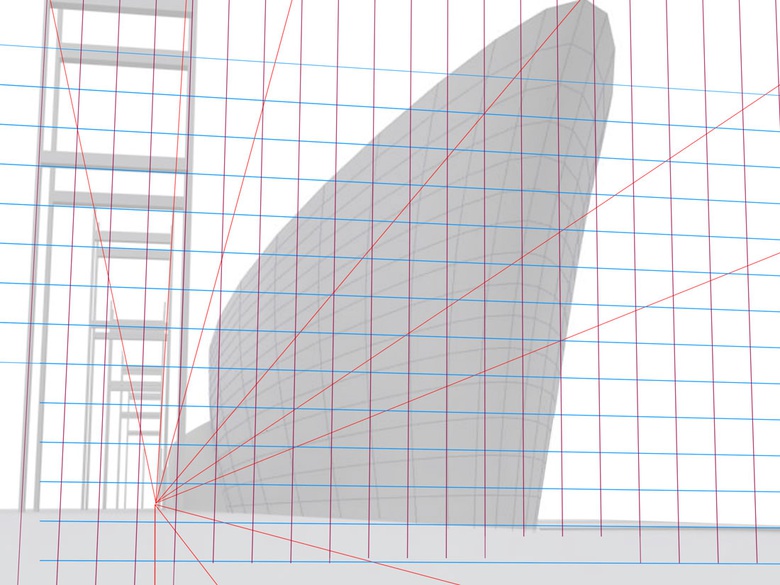 With the perspective and basic 3d shapes in place it was time to start blocking in some of the tonal range (Fig.03). 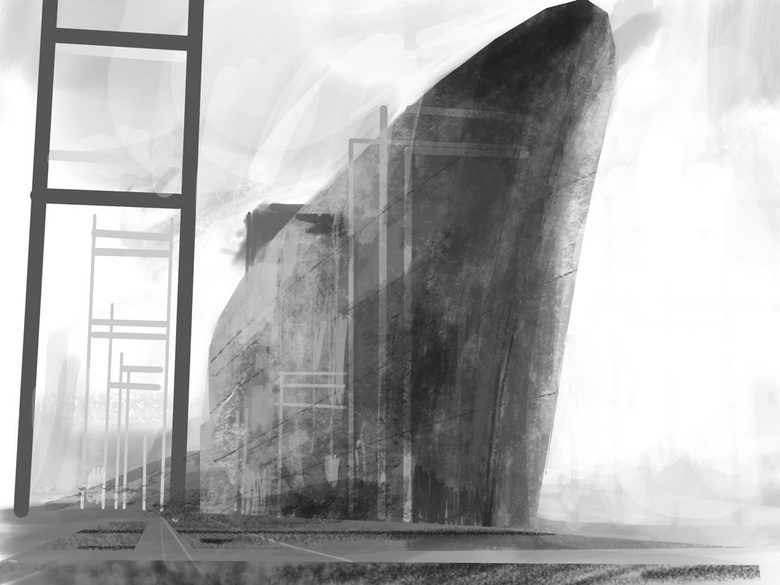 I usually use some textured brushes at this stage and apply some random strokes and marks which often suggest a direction or help describe details. I used the Lasso tool to create some hard edges shapes along the ground which will also help convey the perspective.

In Fig.04 I darkened the sky and boat as there was too much white in the image and made sure that the back of the boat blended into the background less abruptly. The right side of the boat at the bow also looked too bright even though it is reflecting some light and now looks far more convincing. 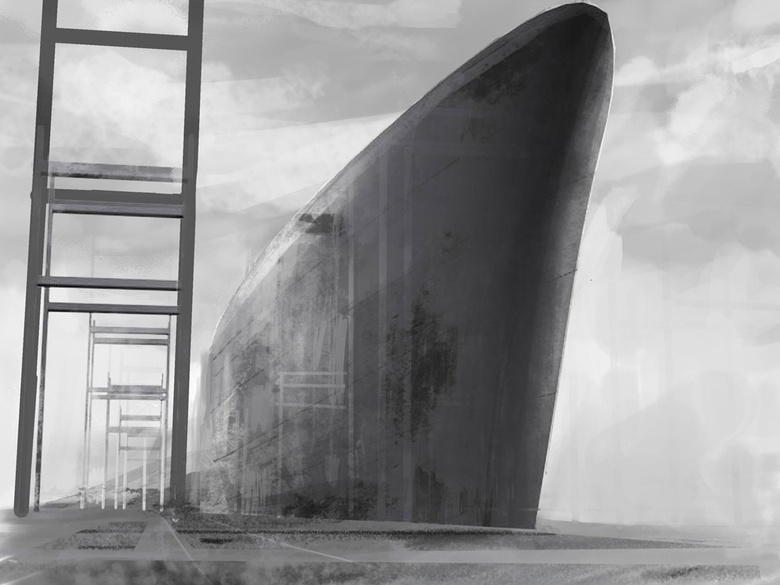 After establishing the basic composition I created a new layer set to Overlay Blending mode which will represent the color scheme. I painted in some provisional colours here which you can see in Fig.05. By setting the blending mode to "Overlay" it is possible to add colour without affecting the tonal range. Some artists use this method whilst others prefer to use color directly as they feel this approach produces a muddier palette. 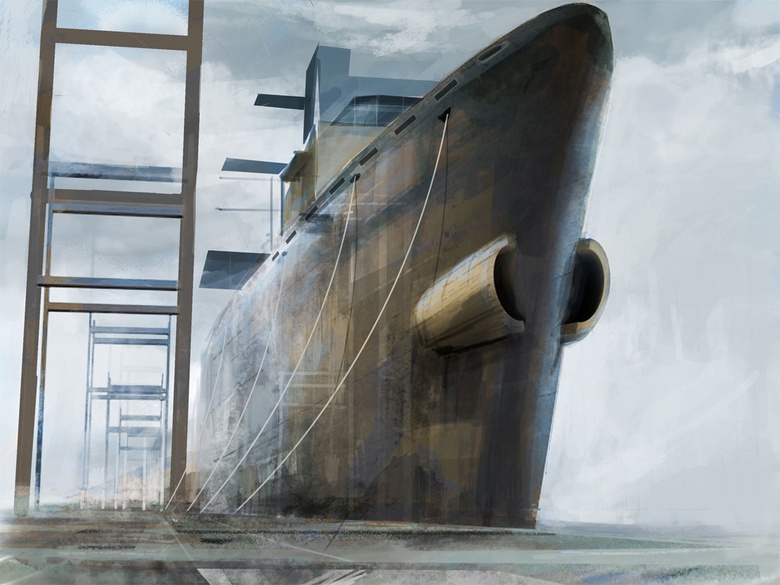 You will notice that I have also added some structures on the deck and two large vent shapes at the front to create a slightly odd feature that help make the boat look less contemporary.

Fig.06 shows the structure of the Layers palette with the tonal composition at the bottom called Main and the color layer directly above it set to "Overlay".

Using the perspective lines as a guide I created some simple shapes on the right using the Lasso tool and then filled them in with a light grey (Fig.07).They automatically appear blue due to the color layer above. 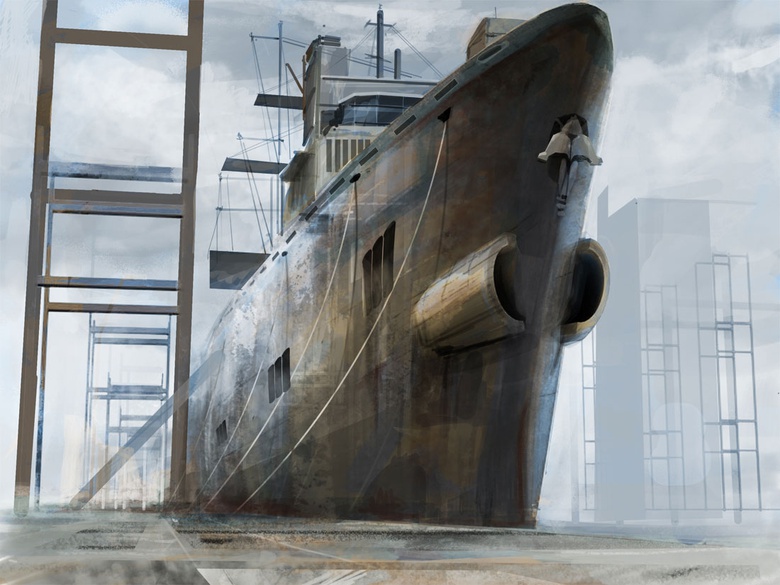 I continued working on the base tonal layer and began adding in some detail along the ship with some structures on the deck and rigging. I added in some shapes that could become crates or platforms but at this stage I was not sure.

When painting in symmetrical detail along the hull it is best to create some shapes on a new layer and then use the Transform tools to match the perspective. Scale and Skew are the two common ones I use but Warp was particularly useful in this instance due to the curvature of the hull.

Fig.08 shows the Transform tools under Edit and in this case "Warp" which has been used to curve the vents along the side of the ship. I made one group first and after duplicating it twice used the "Scale" and "Skew" tools in conjunction with the perspective grid. Once done I then warped each set individually to align with the hull. 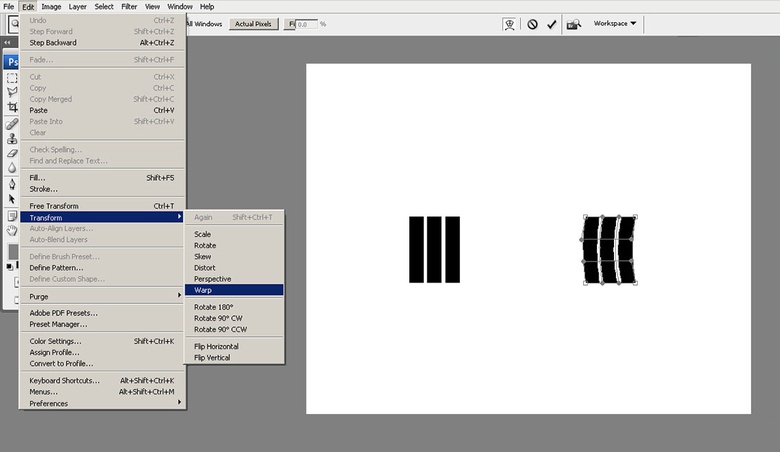 At this stage I began looking through some of the free photos available at 3D Total which I could use to paste into the image and help add a sense of realism. Photos which are carefully used and color corrected can help an image immensely and suggest all kinds of textural detail and subtle effects.

Whilst sifting through the library I found these two photos (Photo 01, Photo 02) which caught my eye. I imagined them fitting somewhere and so dragged them into my image, scaled them and started to experiment.

I finally decided that they looked quite interesting at the bow and fitted in with the vents so skewed them accordingly and blended them in using Image - Adjustments (Fig.09). 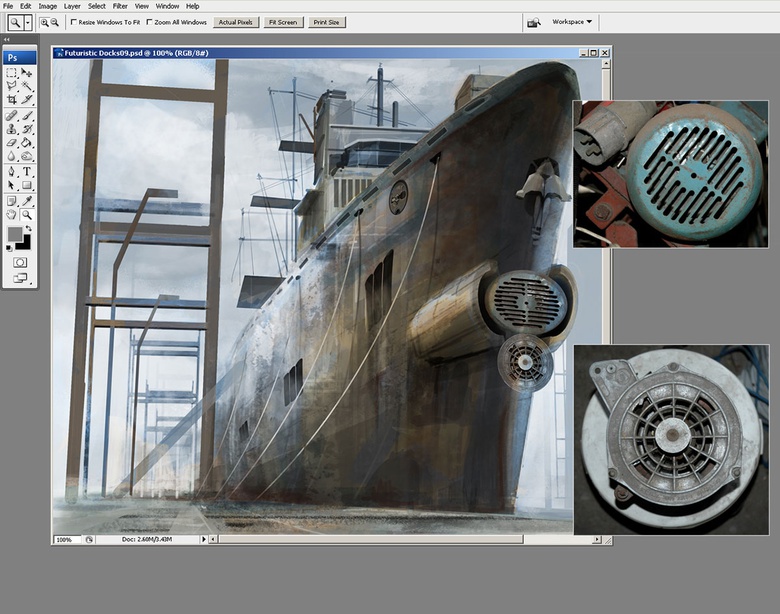 I found a few other useful references in the library which I used to add further detail and realism to the image. I copied and pasted in some aircraft panelling along the hull and on the girders on the left and set the blending mode to Soft Light (Fig.10). 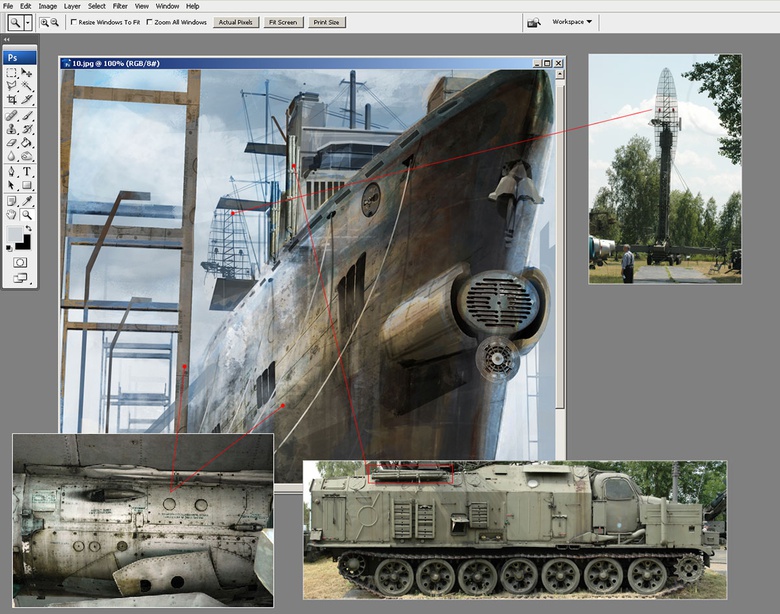 The other two components (component 01, component 02) taken from the radar and tank were simply colour corrected and set to Normal blending mode.

After all of the detail that has been added from photos I decided to flatten many of the layers to keep the file from getting too complicated. These have now been merged with both the color and original tonal layer (Fig.11). 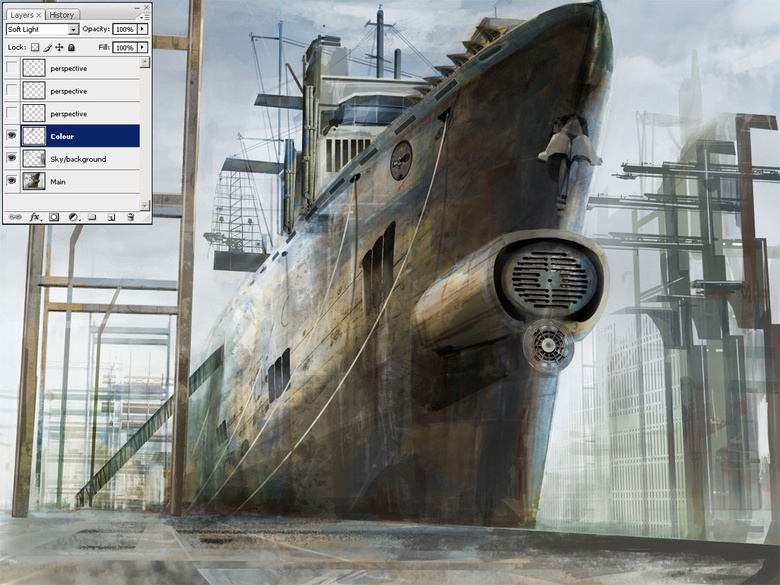 The background on the right is looking a little empty and so I created an abstract shape that could represent a large crane or something and then duplicated it twice before scaling it to match the perspective. I kept this on a separate layer for the time being as well as adding a new color layer set to Soft Light to change the hue of the top of the boat which was too blue.

With a little more refinement to the background and a better integration of the vents on the front of the ship I once again flattened all of the layers barring the perspective ones. I then added two Adjustment Layers: Curves to darken everything slightly and Color balance to add some warmer tones towards yellow (Fig.12). 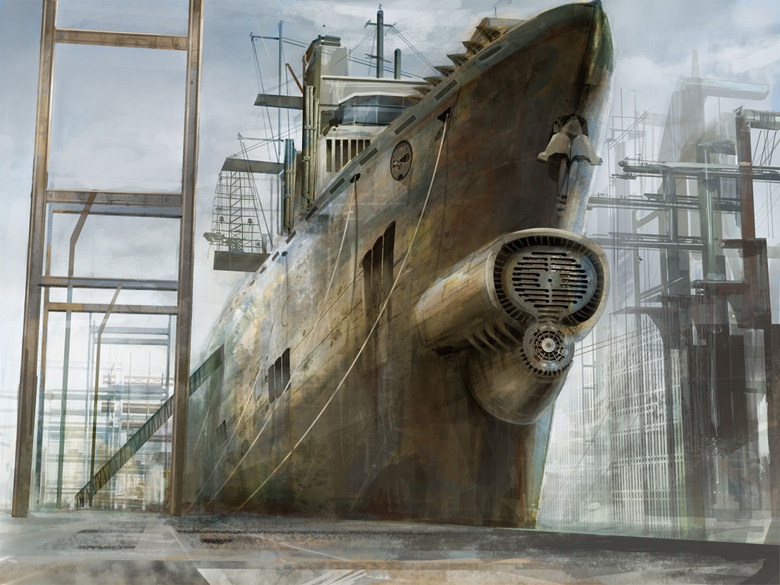 You can see the layer structure here with the Adjustment layers and a further sky layer which I used to add a blue mainly to the upper left (Fig.13). 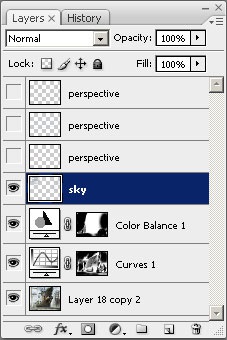 At this point the detail in the image was at a reasonable stage however the color scheme seemed a little drab and washed out; fine for a foggy day but not what I had in mind. The composition was also troubling me because the ship seemed squashed and had no space to breath so to speak. I altered the canvas size by increasing the height and also added a Gradient layer set to Overlay using the colors in the small inset upper left. I then used a soft edged eraser to delete certain sections that coincided with the ship (Fig.14). 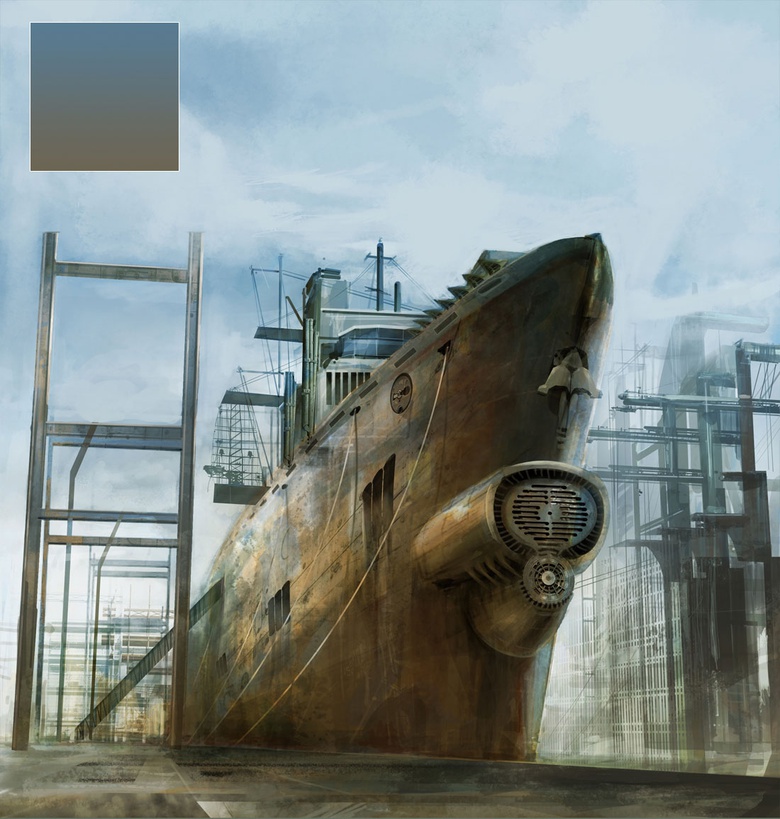 This area of space above the ship helps balance the composition which I feel is much better. With this new injection of color I started to build on the level of detail on both the ship and background (Fig.15). 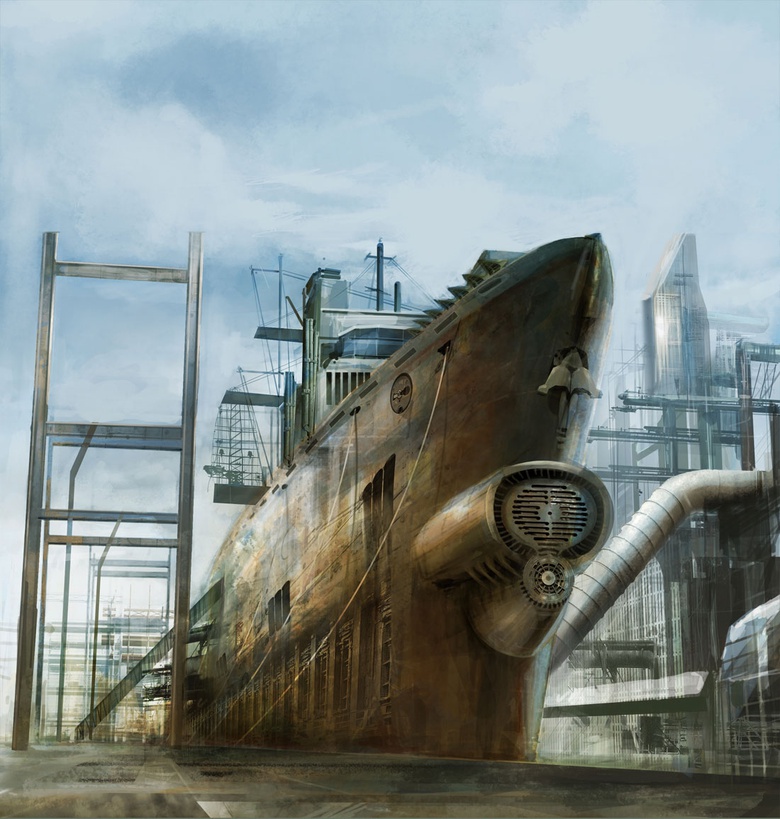 I continued adding further refinements to both the background and foreground. Small highlights on some of the ships detail can make a big difference overall and the panels along the lower side of the hull have now been warped to better match the curve (Fig.16). 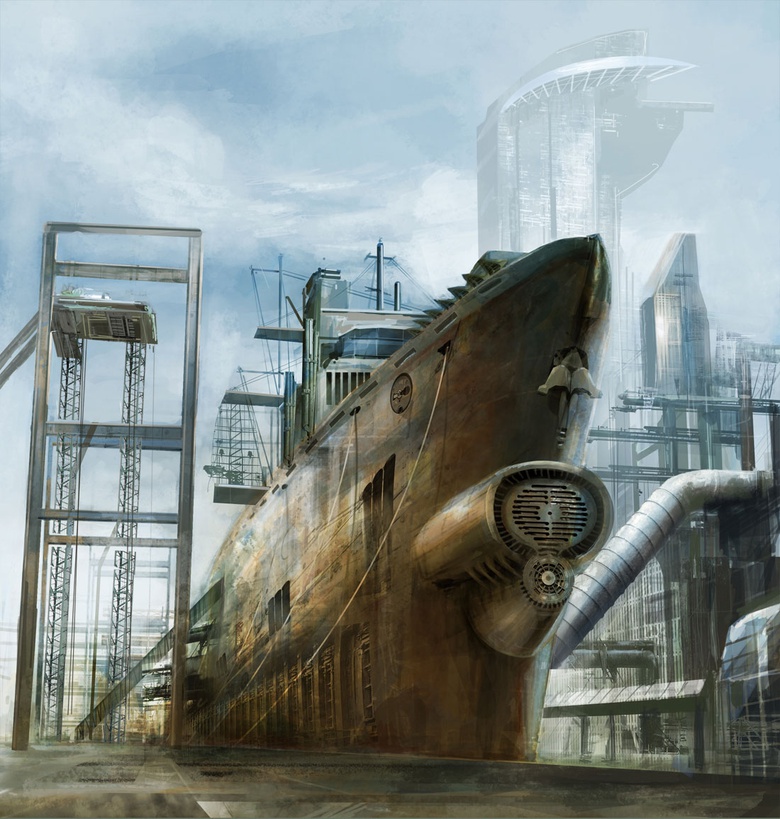 A gigantic building in the background helped add some extra interest along with a spaceship flying over the docks (Fig.17). 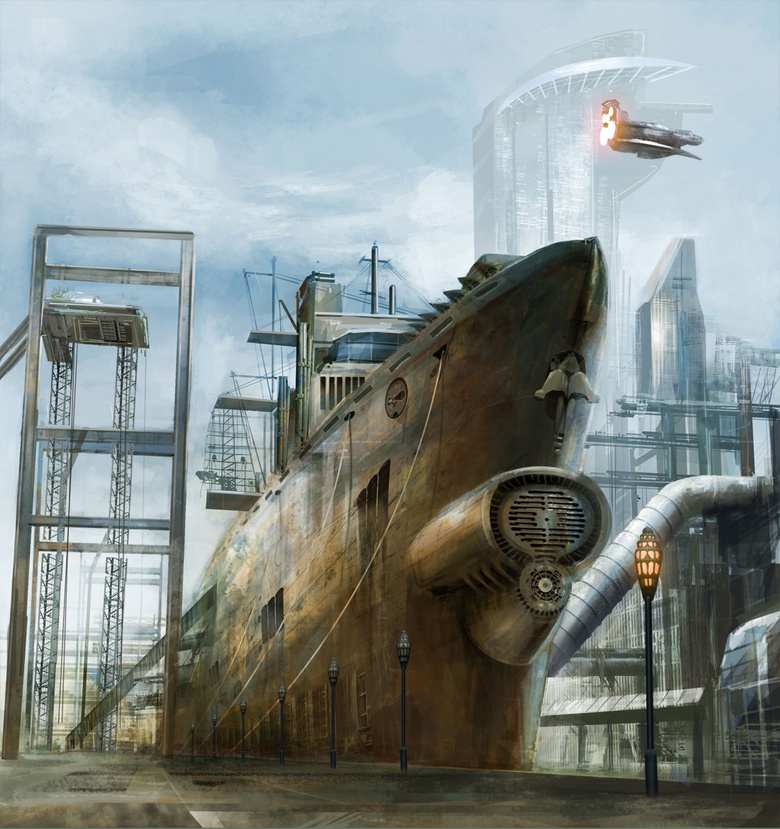 Some lamps and a character placed in the foreground completed the image and with a few more embellishments the picture was complete.

For more from Richard Tilbury, visit his site
Visit the 3dtotal shop to see more ebooks