In this tutorial you will learn the basic structure of a mouth and a step by step guide for how to achieve a realistic mouth shape, including some do’s and don’ts, tips and tricks. I am using Procreate and an iPad for this tutorial, but you can use any drawing medium you like as we won’t be going into any technical or software specific detail. 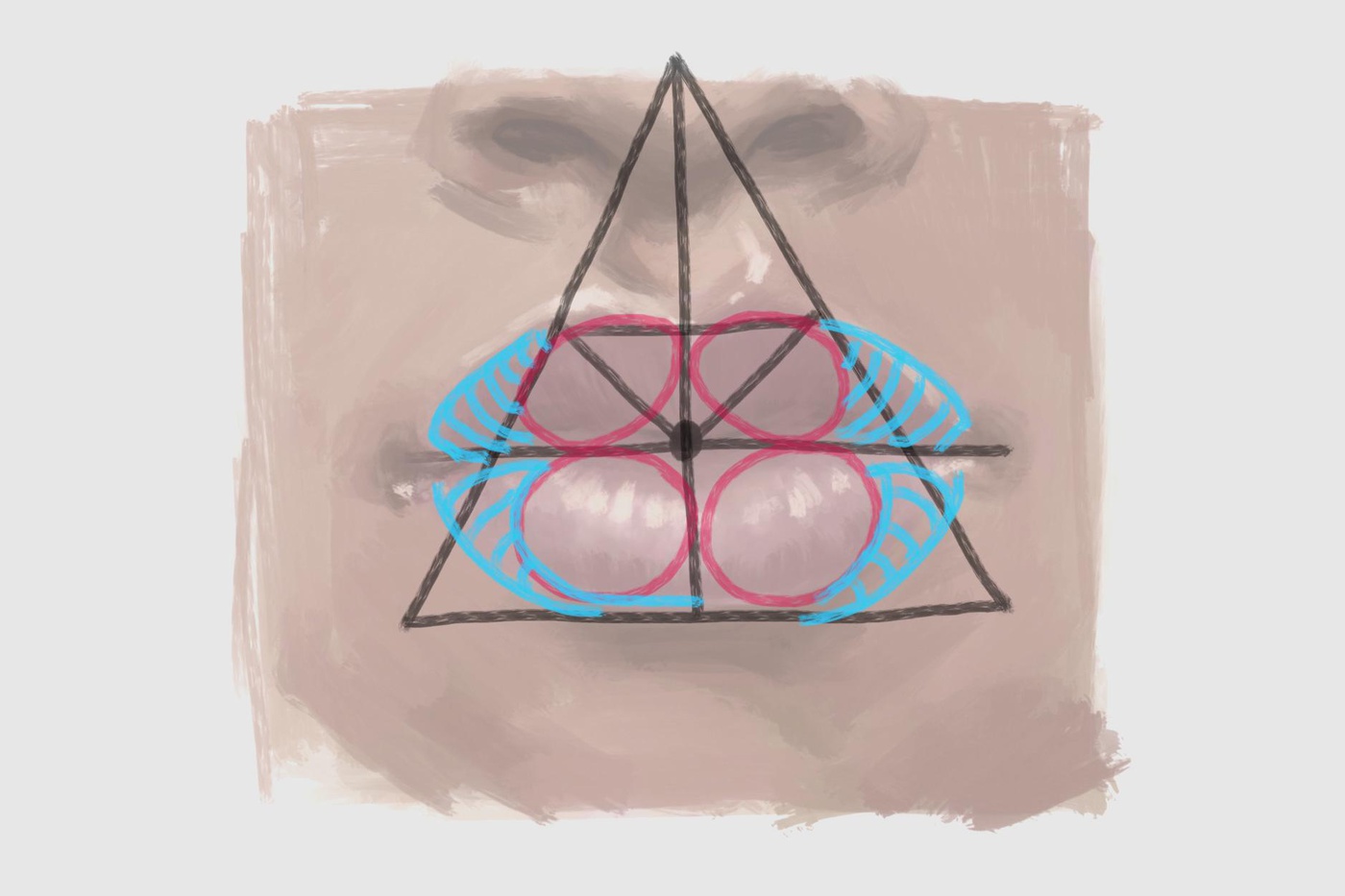 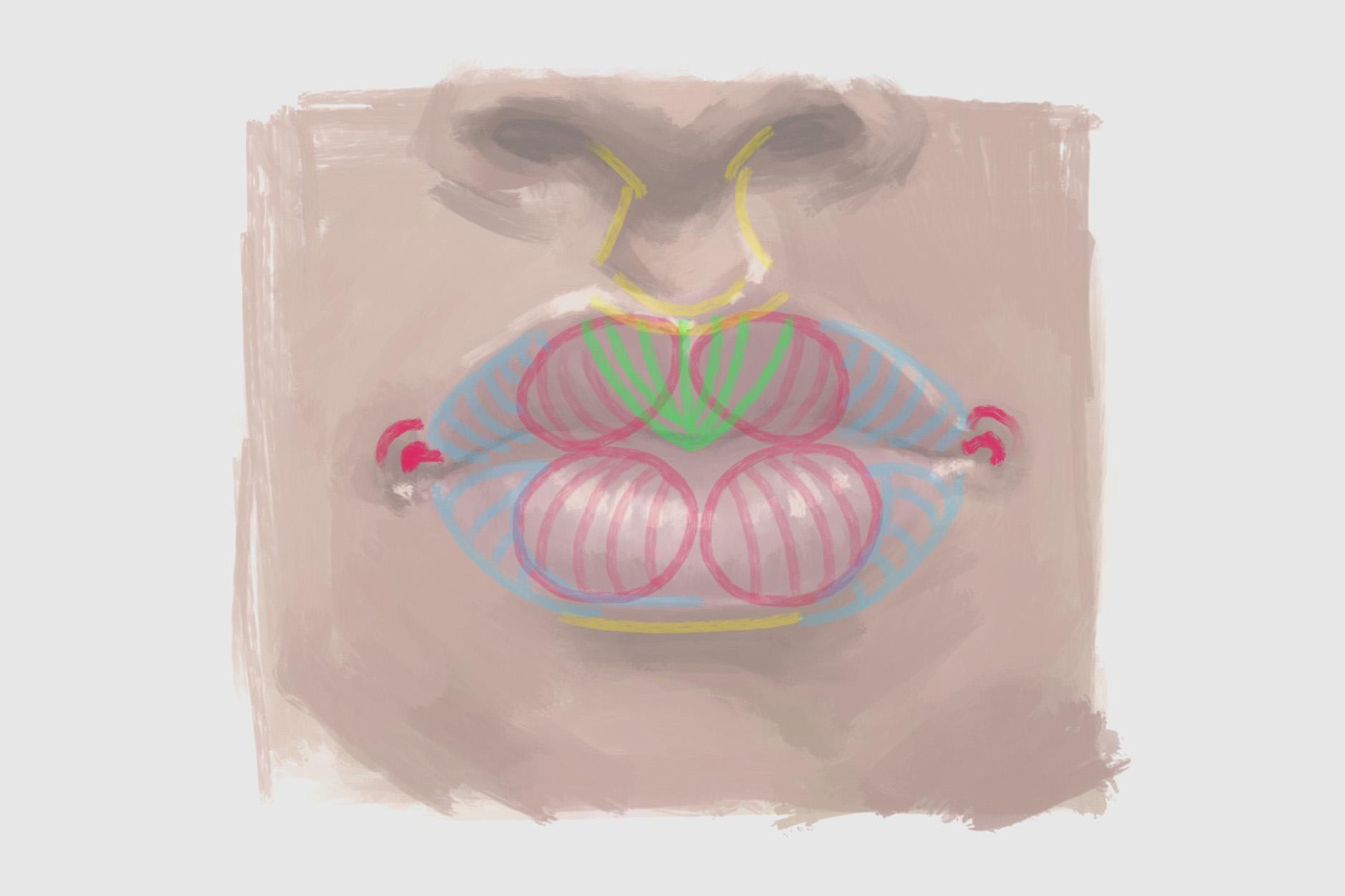 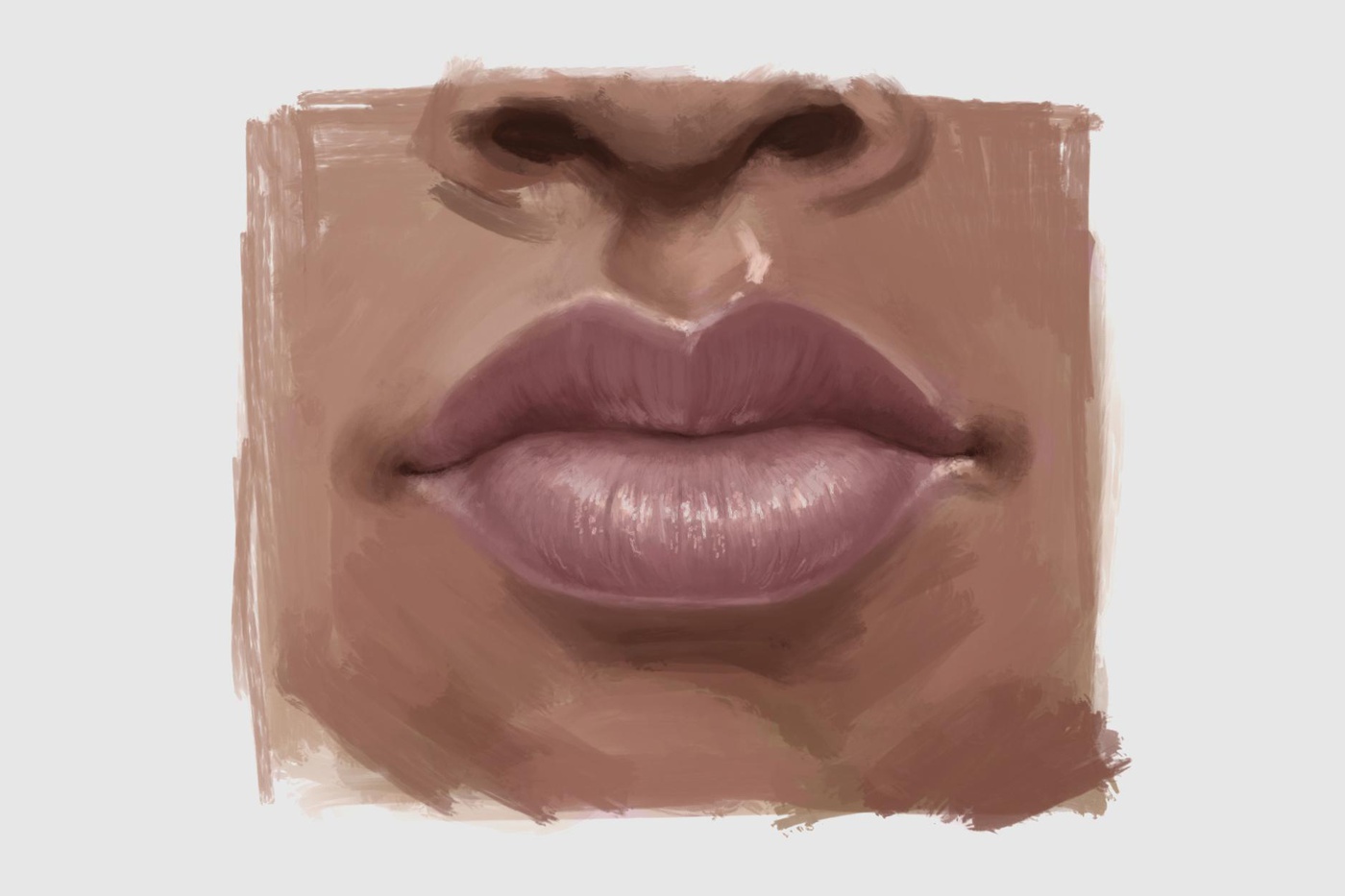 What’s in a mouth?

Let’s start off this tutorial by looking at the basic parts a mouth can be broken up into. I’ll be referring to all of these throughout the tutorial so keep them in mind! 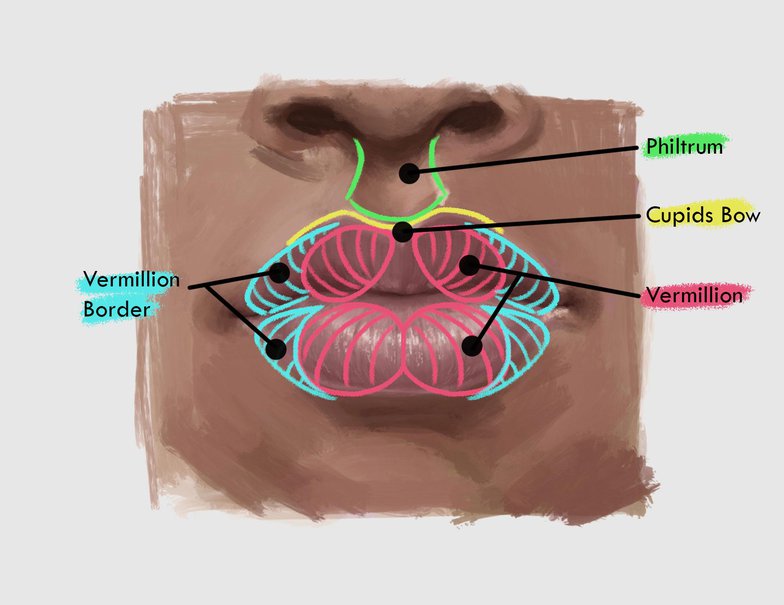 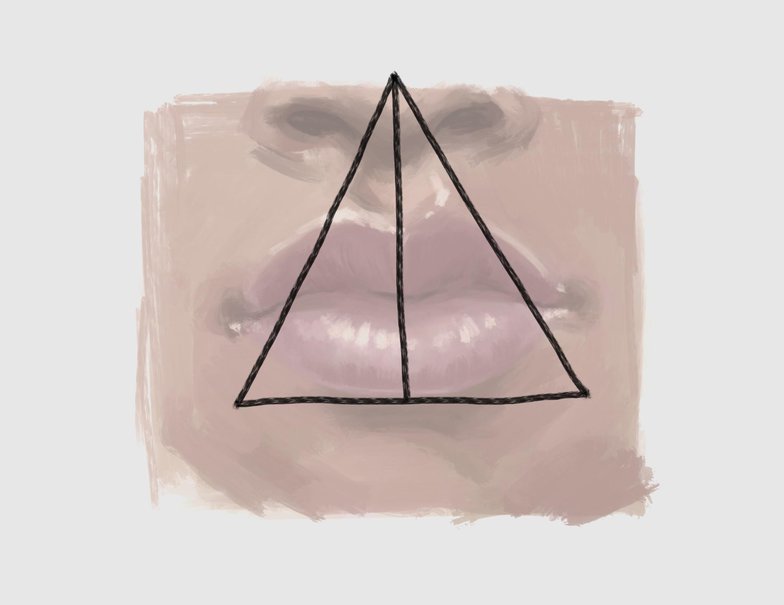 Next draw a line down the middle of your triangle and pick a point anywhere along this line to indicate where the lips will meet. From that point you can draw an upside down triangle up to where you would like the top of your lips to be. Remember that this can be any height you want as all mouths are different and lips come in many different shapes. 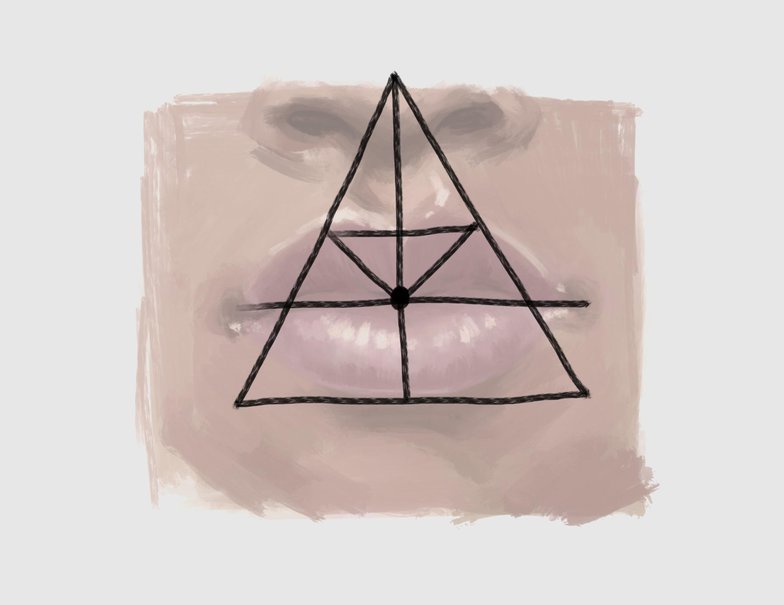 Now that you’ve identified the top, middle, and bottom of your lips you can start to look at the shape. Draw four circles, two above the center line but not above the line you created to mark the top of the lips. The other two circles you can draw in the bottom section. I’ve chosen not to have the bottom circles touch all corners of their square as I’d like the plumpest parts of these lips to be more towards the center. These red circles will indicate the primary fat pockets of the lips, also known as the Vermillion. 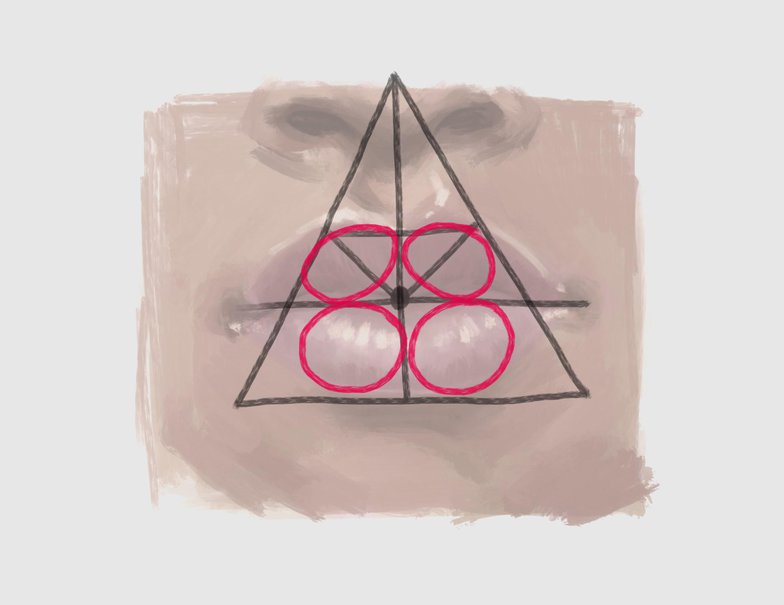 In blue we can now draw in the outer edges of the lips. Be sure to add in some lines from the outer edge of the lips going in towards the red circles we drew previously. This will basically make up the border of the lips and is the area where the lips connect back with the rest of the face. It’s worth noting that on the upper lip, this ridge rolls in under the lip. 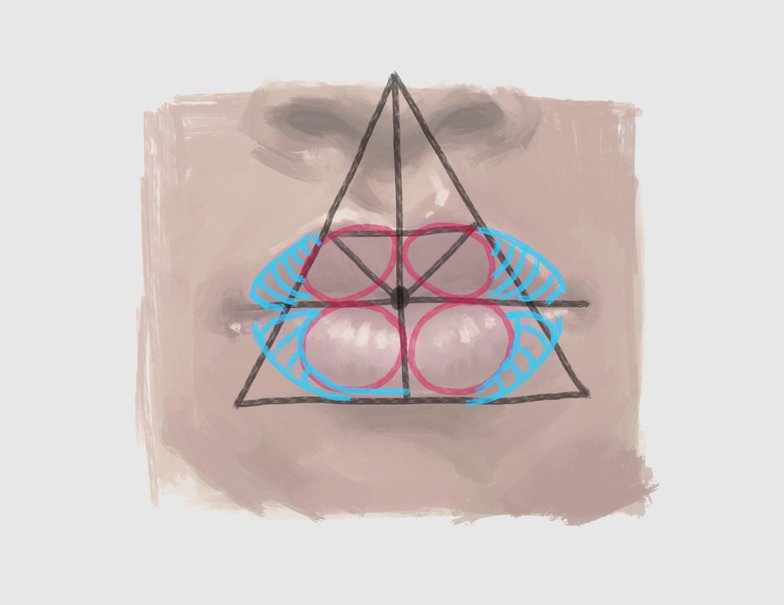 Remember that upside down triangle we drew in the beginning? Now from the center point of the lips, we can draw lines coming up towards the edge of that triangle. It’s important that these lines have a slight curve about them as the center line is the bit that sticks out the furthest and the lines on the side pretty much make up opposite facing planes. 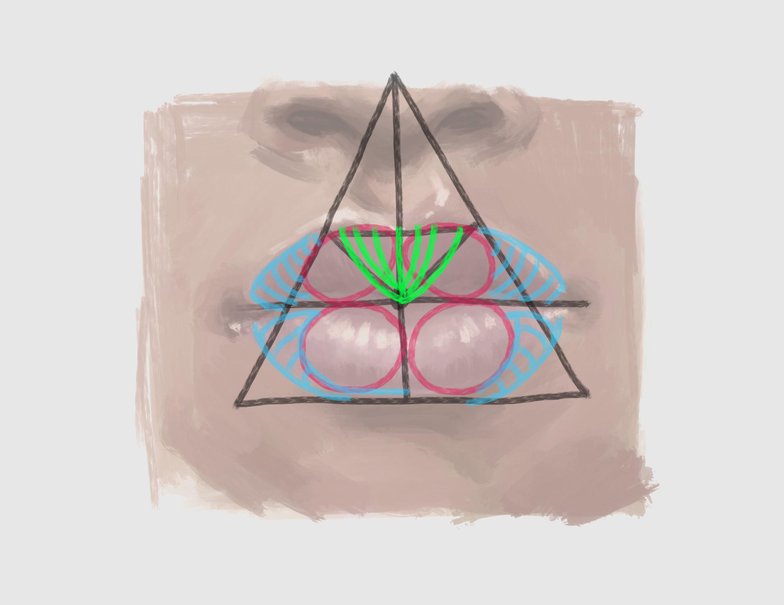 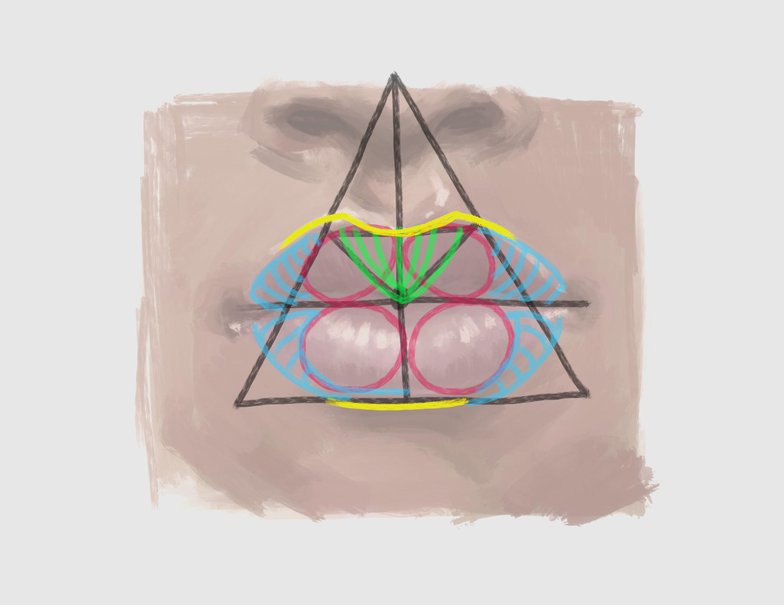 Next we can draw in the Philtrum. This is the little dip above the lips that bridges the gap between the lips and the nose. Note that the Philtrum basically runs up along the triangle we originally drew, into the nose. The Philtrum does not connect under the nose but rather runs into each nostril. This is why the tip of our triangle ends on top of the nose and not at the base of the nose. 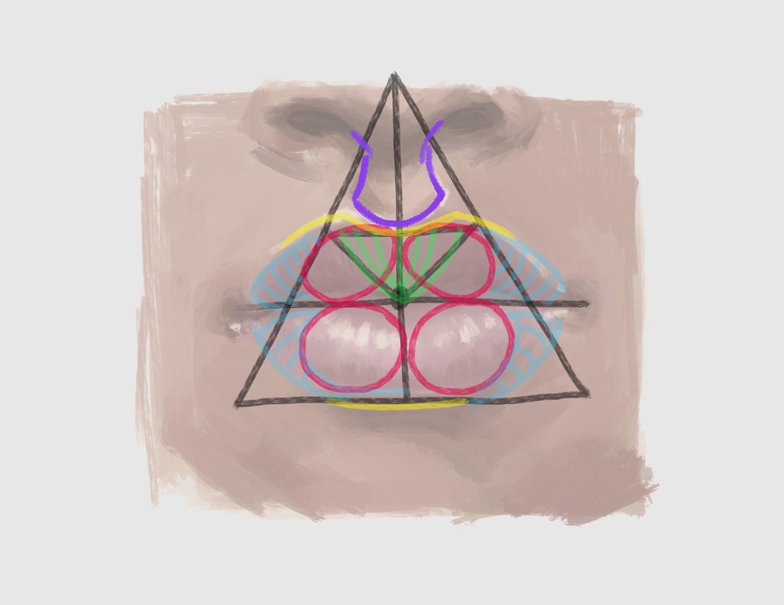 Next we draw some lines onto the red circles to indicate the direction in which the creases on the lips will run over the Vermillion. You’ll see that, unlike the outer ridges (blue), I’m pointing these lines towards the center point. This may seem a bit odd now, but it all makes a lot more sense when you’re actually drawing the creases on the lips. 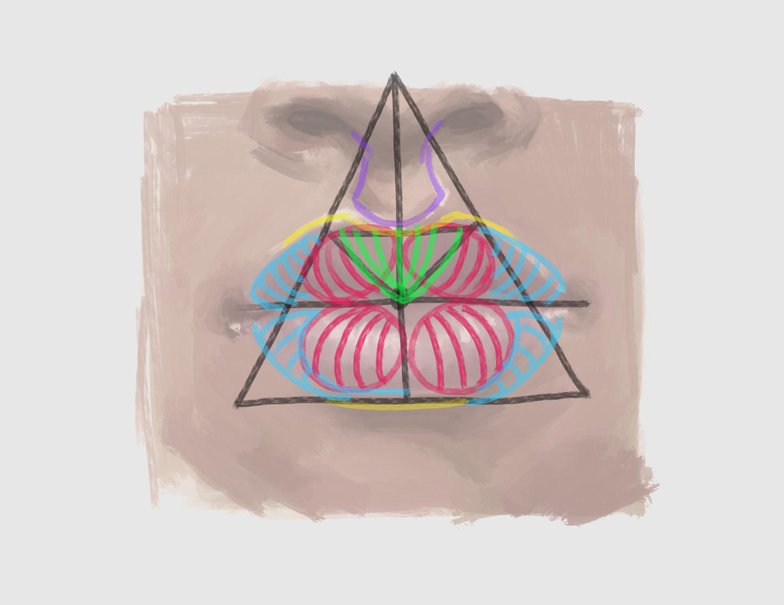 I won’t go into wrinkles here but smile dimples, highlighted here in red, are quite an important part of the mouth. These appear pretty much right in the corners of the mouth and are different to smile lines that appear under the cheeks. The two are often confused and it’s common to see artists incorrectly extending cheek wrinkles down to the corners of the mouth, but the two are actually separate and generally everyone will have these dimples when they smile, regardless of age, while the other lines tend to appear more as we age. 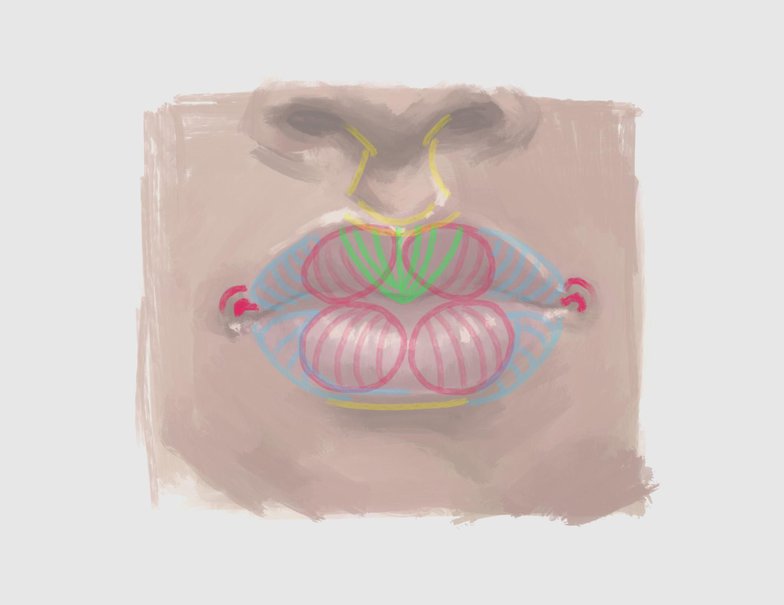 When creating the texture for the lips it’s important to remember that lips aren’t smooth, in fact they can have a whole lot of creases in them! This means that when you’re adding specular highlights or gloss to lips this should be taken into consideration. The creases and lines you see on lips are the reason why highlights will seem so broken up and it makes sense to dot highlights across the lips in a broken streak rather than to create one solid highlight, unless of course that’s a stylistic choice.

You’ll see I’m creating the lip texture through a series of lines that at least mostly follow the curves we drew earlier. Following these curves gives the lips a nice rounded feel, making them seem weighty and full. For flatter lips you can smooth out the curves. 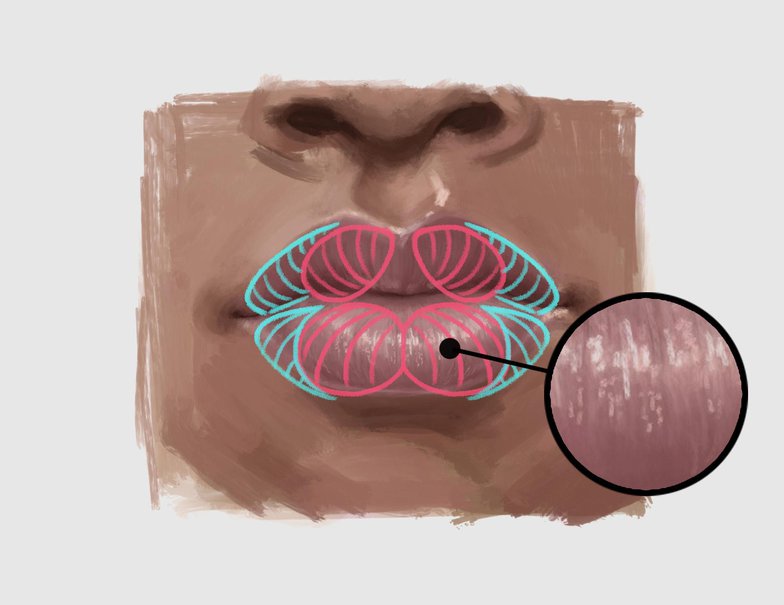 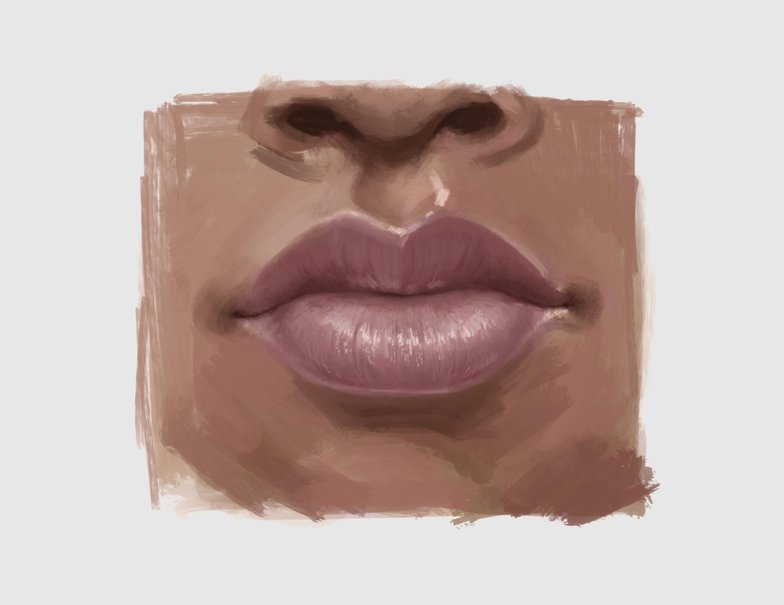