Juan Carlos (Juanco) Alegre shares the process he used to create his image The Lost Mission, demonstrating texturing techniques along the way. 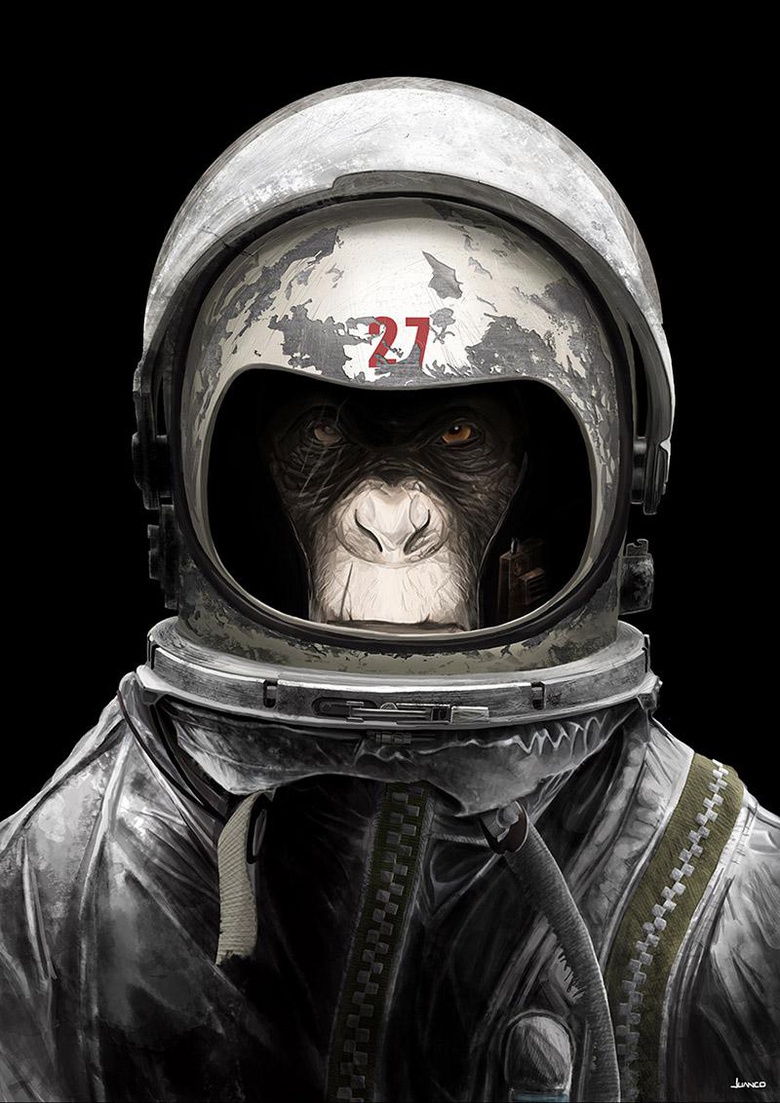 Juan Carlos (Juanco) Alegre shares the process he used to create his image The Lost Mission, demonstrating texturing techniques along the way.

This tutorial is about the steps I followed to create the concept, design and illustration of my work titled The Lost Mission. The concept of the work arose from reading about the cold war and the space race, where scientists from both the U.S. and USSR were experimenting with the effects of space travel on living organisms, and how they could test what humans would experience by using mammals such as dogs and monkeys.

After reading about this I came up with idea of a story about a lost mission at that time, where the pilot would have been a young ape lost for years, mysteriously returning to earth. But the ape returns with clear evidence of having lived an odyssey to get home, as well as a strong change in attitude, as if the journey had made the ape become cold and more intelligent.

With that in mind I started to design a composition. At first the main idea was to make two pictures, one with the ape at the time of the test and another when he returned years later, to see the comparisons between these two great moments.

In this tutorial I will focus on the second illustration, the ape returning to earth. In this tutorial we will explore and develop the concept, as well as focus on the use of light to give more intensity to the drawing and the advantage of using of texture brush effects to finish of the work.

Trial and error: the sketch

The first step is to start the sketch. I try to compose the image according to the concept of illustration, after several attempts and sketches I decided that the most important thing was to display a foreground image of the ape looking straight at the camera. After many attempts the composition ended up as a close up of the apes face up staring at the viewer, as his face and suit reveal that he has gone through many difficult times before returning to Earth! 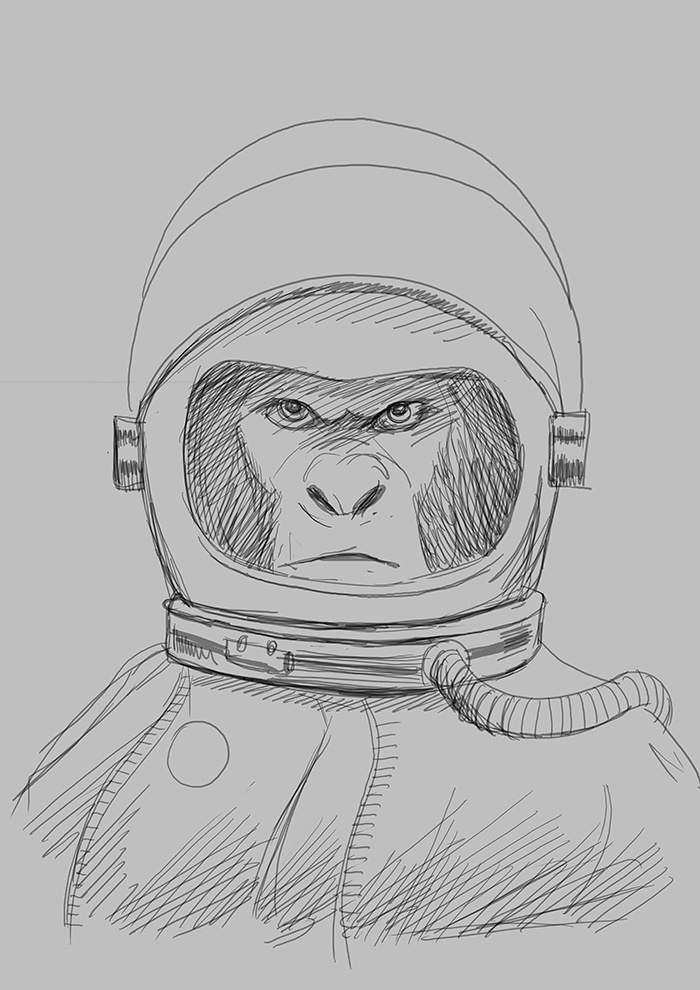 After I finished the sketch and had finalized the composition, I began to define it by cleaning up the line work and bringing the idea to a more realistic level.

At this point I used references of real images in order to achieve a higher level of accuracy. I searched for images that showed the spacesuits that were used at the time to research the materials and helmet design, for both the American and the Soviet side. I did the same with the appearance of the ape, to capture their expressions and proportions. 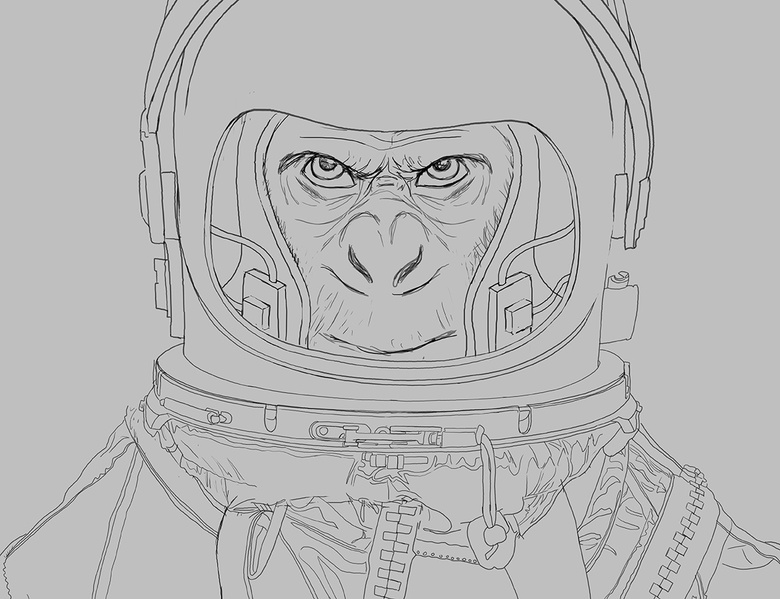 A close-up of the cleaned up line work

The next step is to define the type of light that will be used in the composition, this step is very important because it creates the atmosphere of the whole illustration. In this case I wanted to create a sense of mystery, so I decided to make the lighting with just one light falling from above, generating a strong contrast of light and shadow on the character and leaving his face in shadow to reinforce his dark and mysterious character. 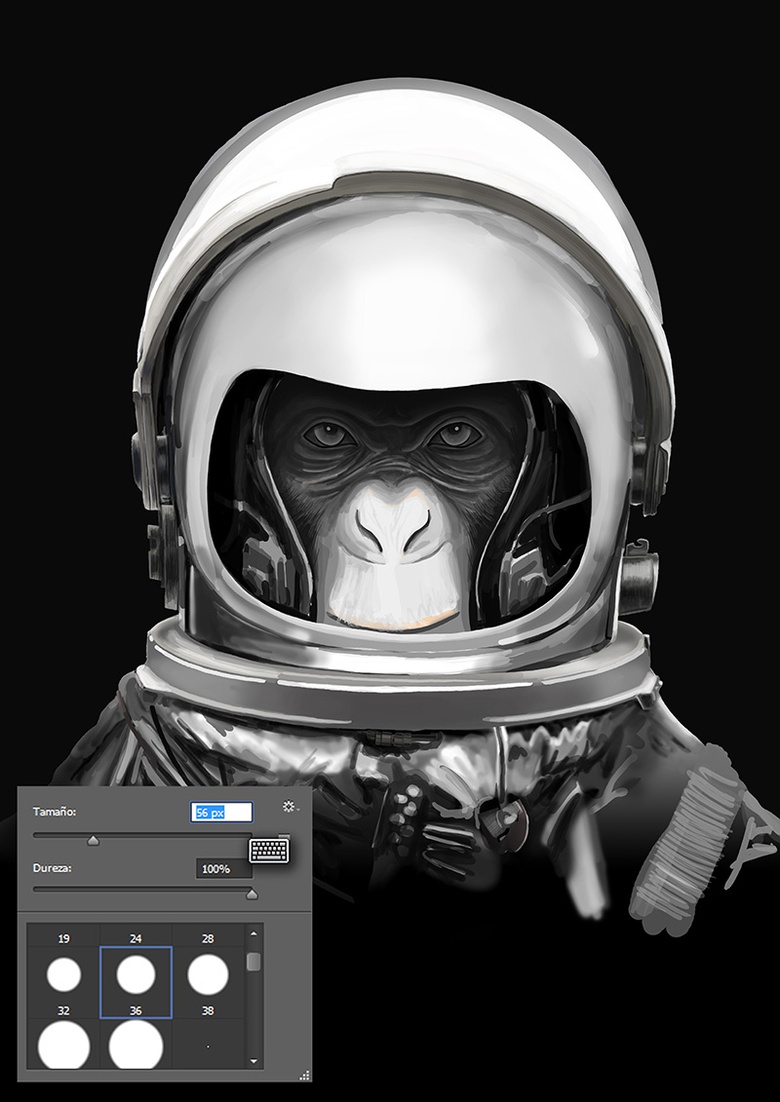 The time to apply color

When I use color in an Illustration it is as important as the lighting to reinforce the story behind the concept. Adding strong or very saturated colors would be a wasted effort, because it contradicts the intent of mystery to be expressed in the illustration.

In this case, the color palette that I used was made of desaturated colors that reached almost gray tones. I added a few areas of color such as the number on the helmet and the eyes of the ape.

Color can make a picture better or worse, so it's good to take time to test them out on the entire image without working in the details yet. 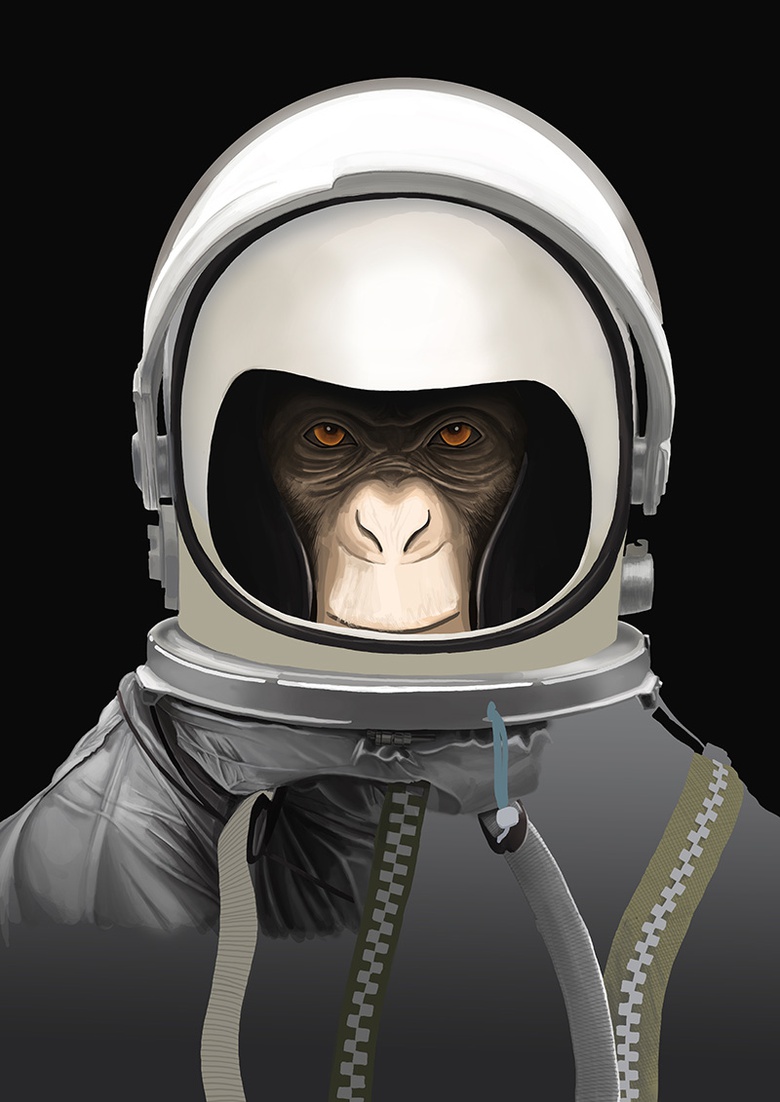 Having decided on the colors and the light, it was then time to start painting. In this part it is important to use references or photographs to have a good guide when painting materials; in this case the suit is a kind of reflective material, which generates bright areas unlike the helmet, which is a matte material.

The base layer of the painting is important because I will add the texture details over it to give life to the suit. With the ape the process is the same, using reference images, I paint with the established lighting, trying to make it as realistic as possible. As the face of the ape is the main focus of the illustration, it is important to strike a resemblance to a real ape when painting, and always respecting the lighting scheme. 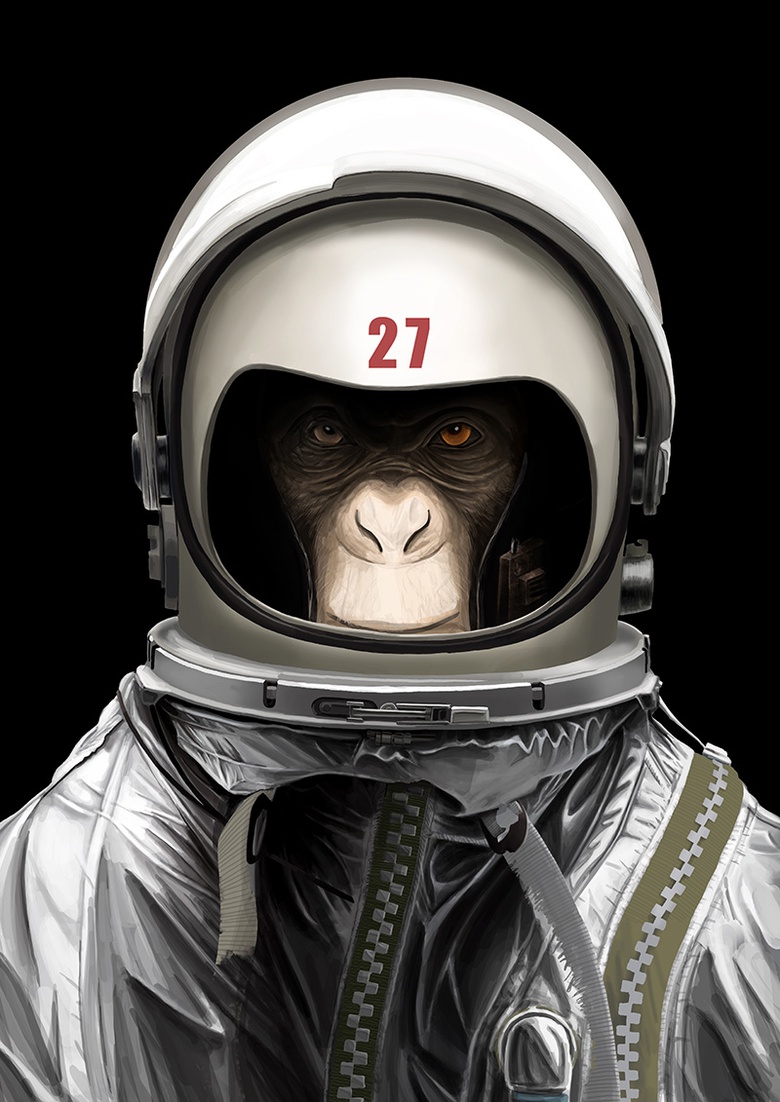 I started to define and add details to the character and space suit. For that I used new layers as Clipping Masks to work within the painted areas.

Returning to the concept, the idea of the illustration is that the ape is back after a long time, and in his absence has gone through many bad times which have made him an aggressive, dark character with a reflection of humanity in his eyes, as if he has evolved over time. To achieve this narration his suit must show the wear of time and possible fights he faced, for that I highlighted details of broken straps, worn and torn materials.

The same situation applies to the face; it should reflect age and mystery, as well as certain details like scars and wrinkles. I also wanted to achieve a cold and gloomy expression. 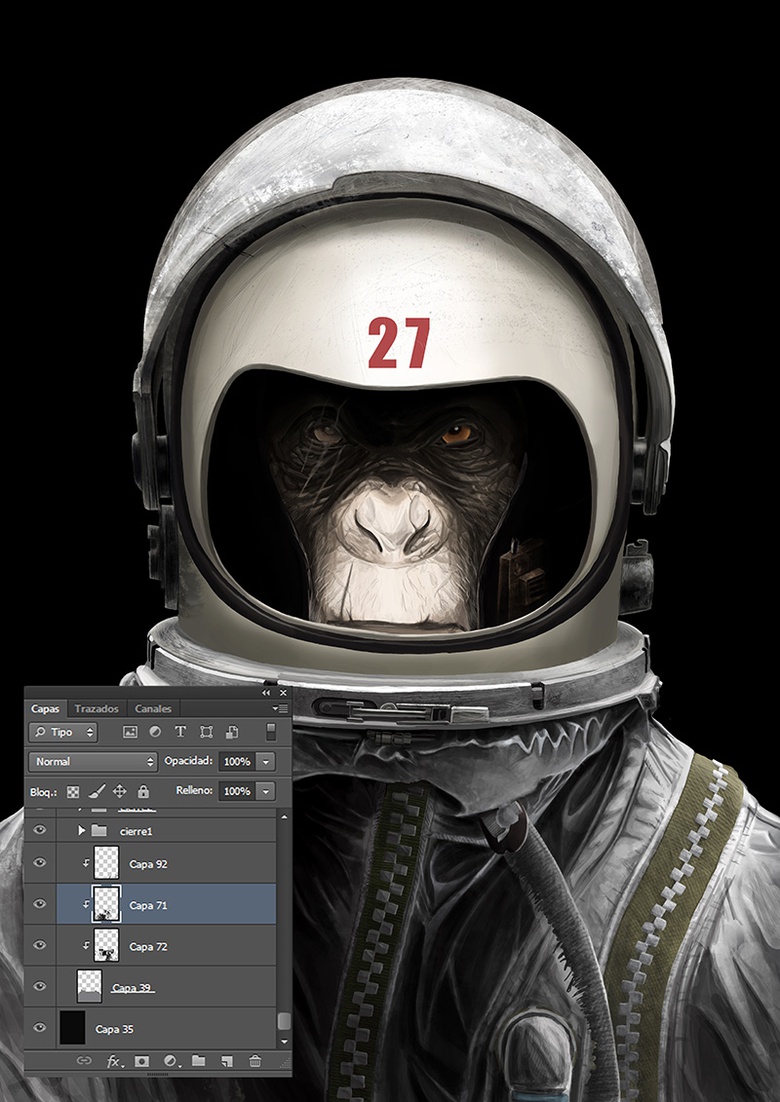 Although it is always better to make your own textures when you illustrate, it also serves to use photographs of real textures to complement what you have done already.

The important thing is to not rely on these textures but use them to support your work and help better express what you want to communicate. In this case I created the texture of rust and weathered paint from photos that I had filed in my library. This helped to give the helmet a more realistic look. 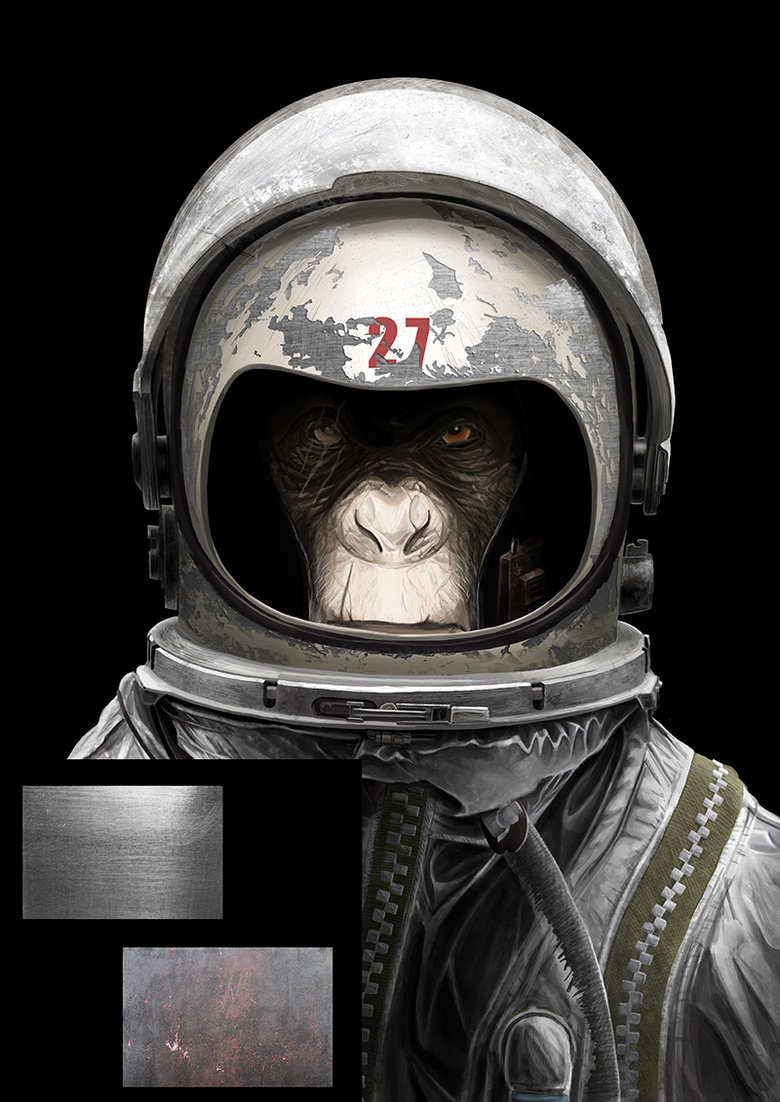 Using photos to create texture brushes to detail the helmet

Throughout the painting process, as I advance in the illustration, I added more textures to the spacesuit and the face using different types of brushes, which give you the option of painting differently. Photoshop has a very good default brush library to generate different types of textures, but it is always advisable to eventually customize and create your own variations.

After finishing the details and textures, I used the Photoshop settings to enhance the color, brightness and contrast of the entire image (Image > Adjustments > Brightness/Contrast), and added some effects. 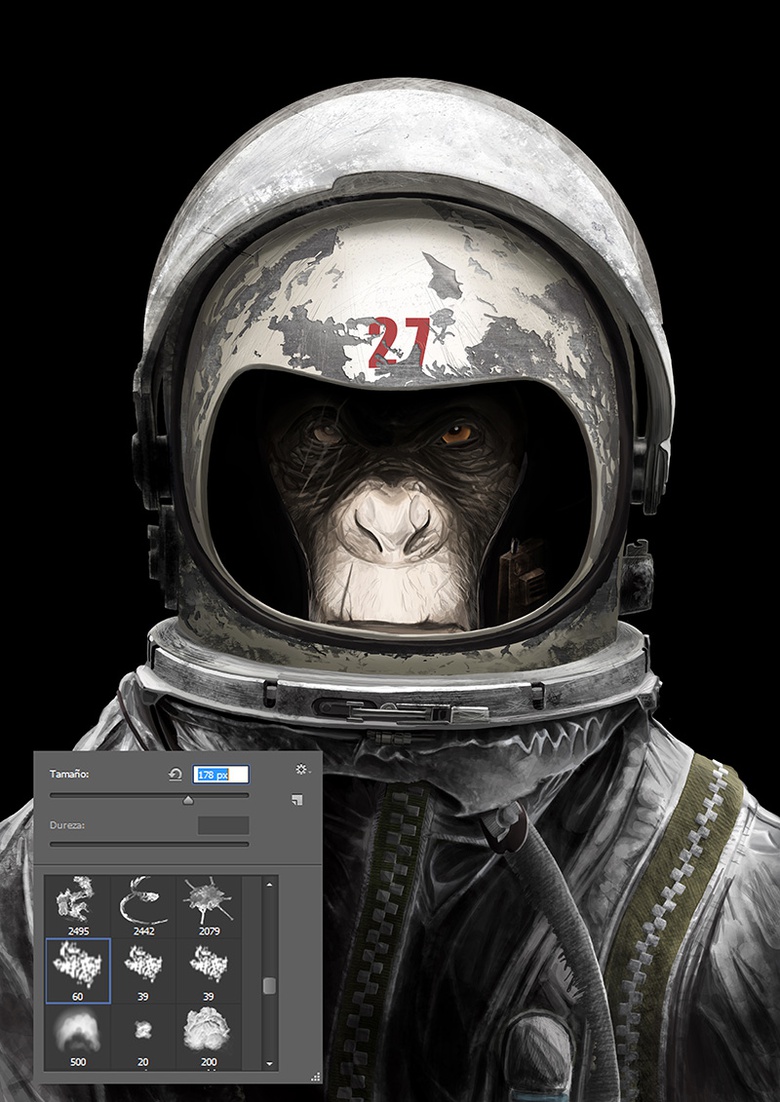 In order to better exploit Photoshop tools, it is always advisable to eventually customize and create your own brushes