Paint an expressive orc in Photoshop 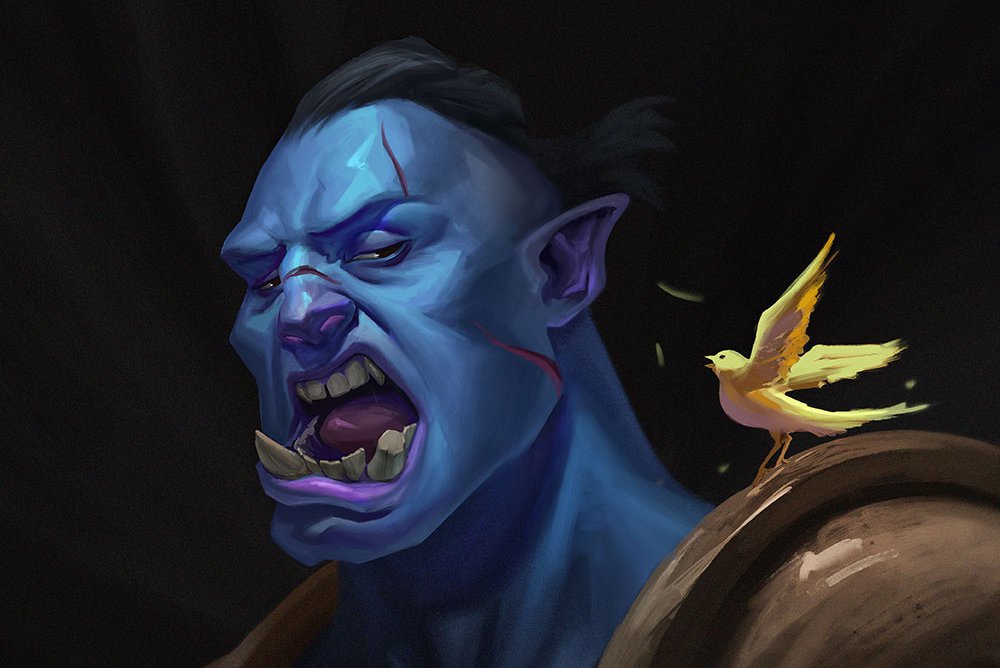 Illustrator and concept artist Marco Wulfr takes us through the paint process for his expressive orc and fearless bird...

In this tutorial, I will show how I exaggerate the proportions of a portrait from a very rough line drawing to a finalized painting while manipulating the planes of the head to create interesting shape design on an orc's face, all for the sake of storytelling.

I started this image with the idea that I wanted to paint a portrait of an orc, with some story. So I roughly sketched this orc talking to this little bird that arrived to give him the news about something.

I do not worry about line quality because I'm going to get rid of the lines later, it's just for me to have a clear initial idea of what I want. In this phase, it's important to focus on the idea, as well as blocking simple forms and getting a sense of tridimensionality to create a base for the painting.

Here I start choosing colors and the direction of my light source, deciding that I want this blue color on my character's skin. I know that I want to give the main focal point as my character's head, so I put a light source in front/top of his face, in a way that I can carve good cast shadows, below the eyes, nose, and neck. This way, I'm more able to envision the final look that this portrait will have when It's finished. 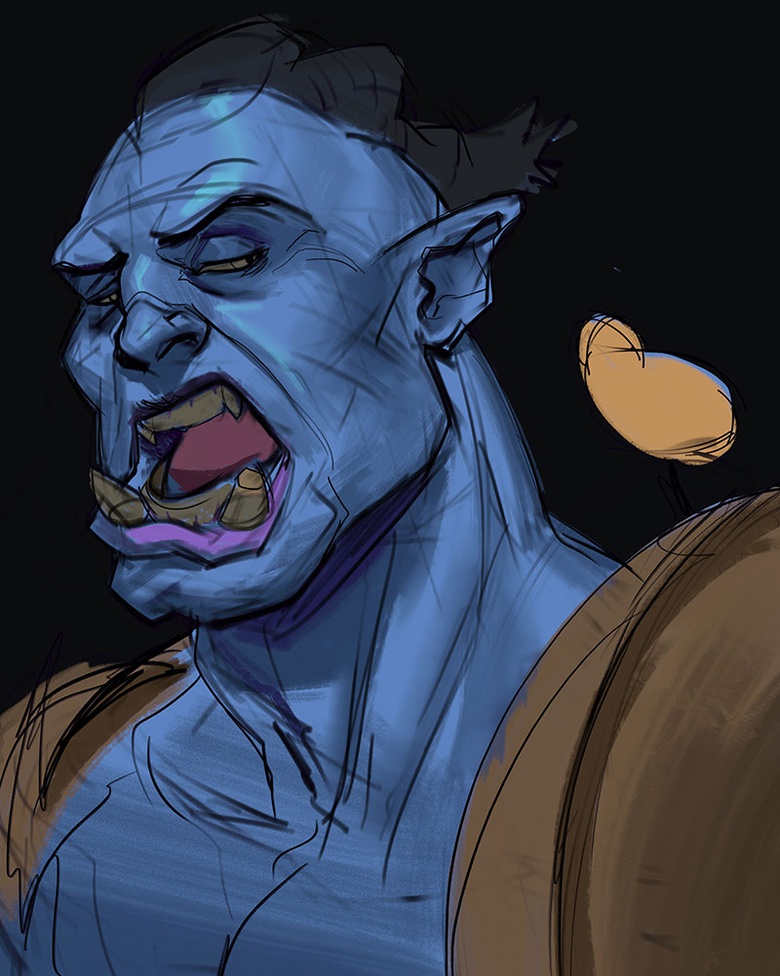 Step 3: From lines to paint

I begin sculpting and carving like a chunk of clay, slowly making the transition from the rough lines that I had, into the edges and the values. It's important to note that while I could rely on the line drawing to define my edges and contours, in painting it's not that way, so, for me, the sooner I get rid of them, the better. Though, I do always keep a layer with my line drawing on top, because I like to check how much I end up sticking to my initial idea the more I get into painting. 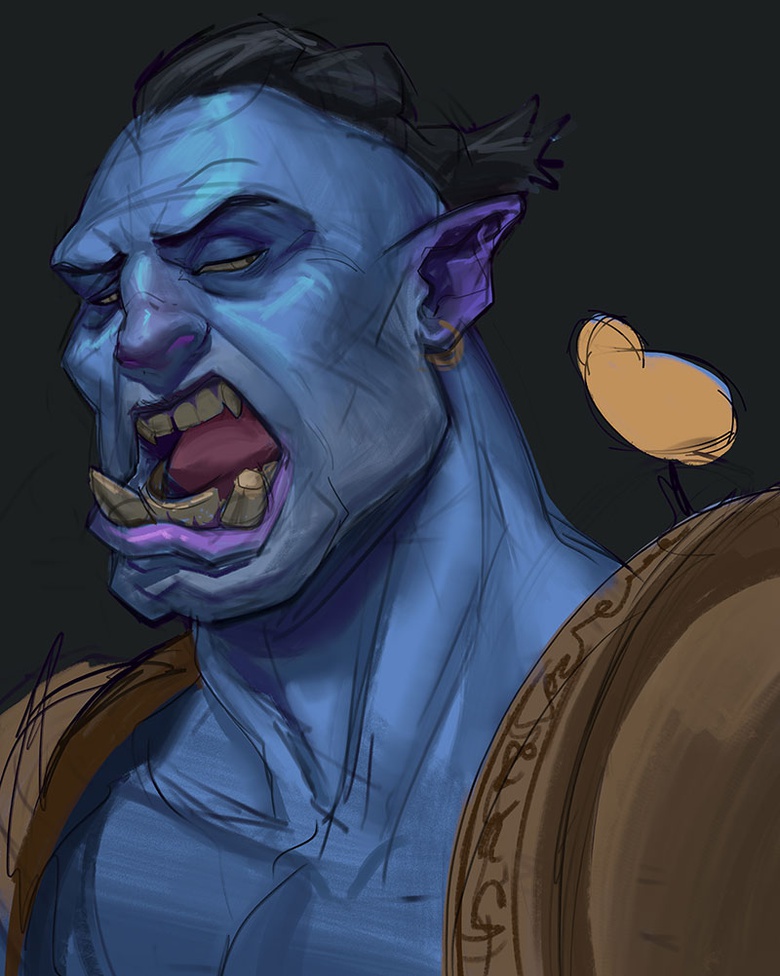 Here I start by only thinking about values, edges and form. I add an earring and some scars as well to try to get this guy into character. But mainly, now it's starting to be all about values and edges. I focus more on painting around the mouth, eyes, and nose, giving real importance to the features in his face so that way, the eye of the viewer will instantly look at the focal points. I try to focus on how the surfaces behave, and the direction of the planes, so that I can get this tridimensional look on his face. 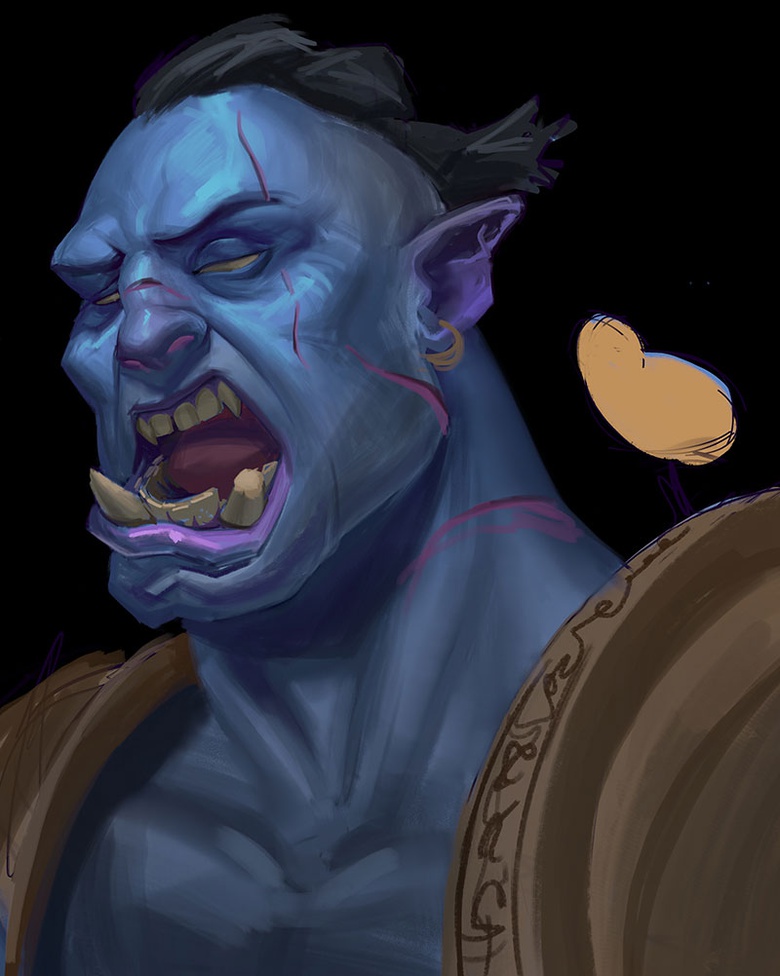 This next step I decided that I needed some contrast in my painting, so I made the shadows darker and sharpened the edges of the places I considered most important, like the eye sockets, and below the nose, neck, and ear. I start thinking about shape design as well, seeing my shadows and lights as shapes of a bigger puzzle that I need to make more appealing. So I decide that I want to go with a clearer look for this painting, separating all the elements really well, for readability and stylization. 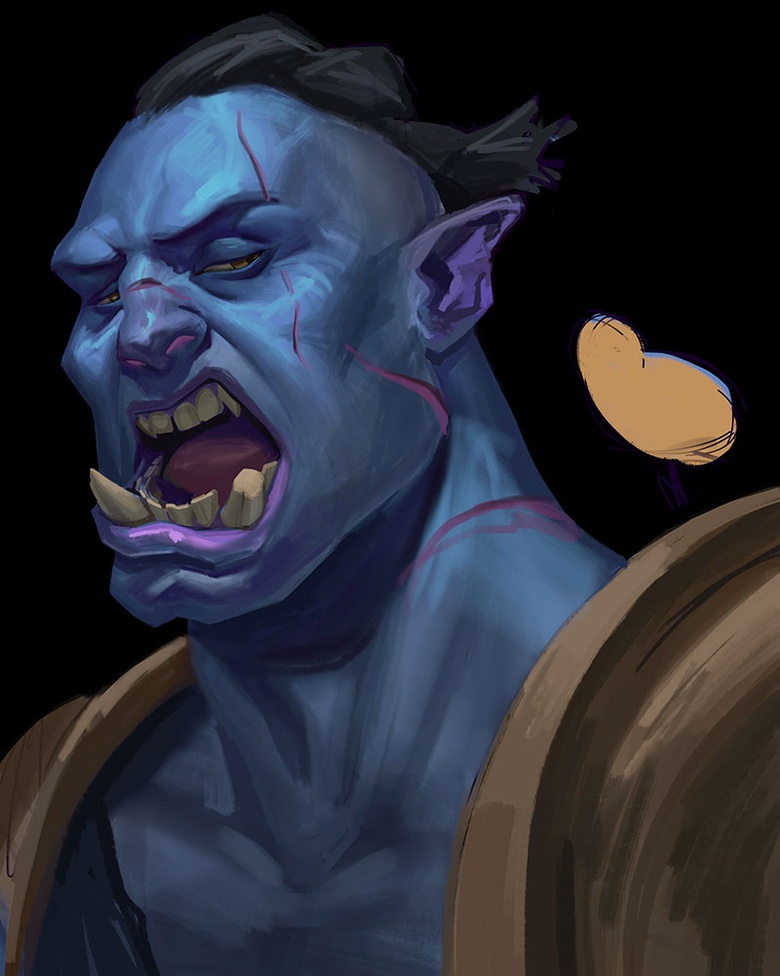 Still not satisfied with the way I was pushing the painting, I decided I needed more shape design and contrast (I tend not to be afraid of changing my paintings if I'm not satisfied with them). I tried to clearly define how I wanted my main shadow and light shapes to look like, and to manipulate them as well to make sense with the surface they were on. 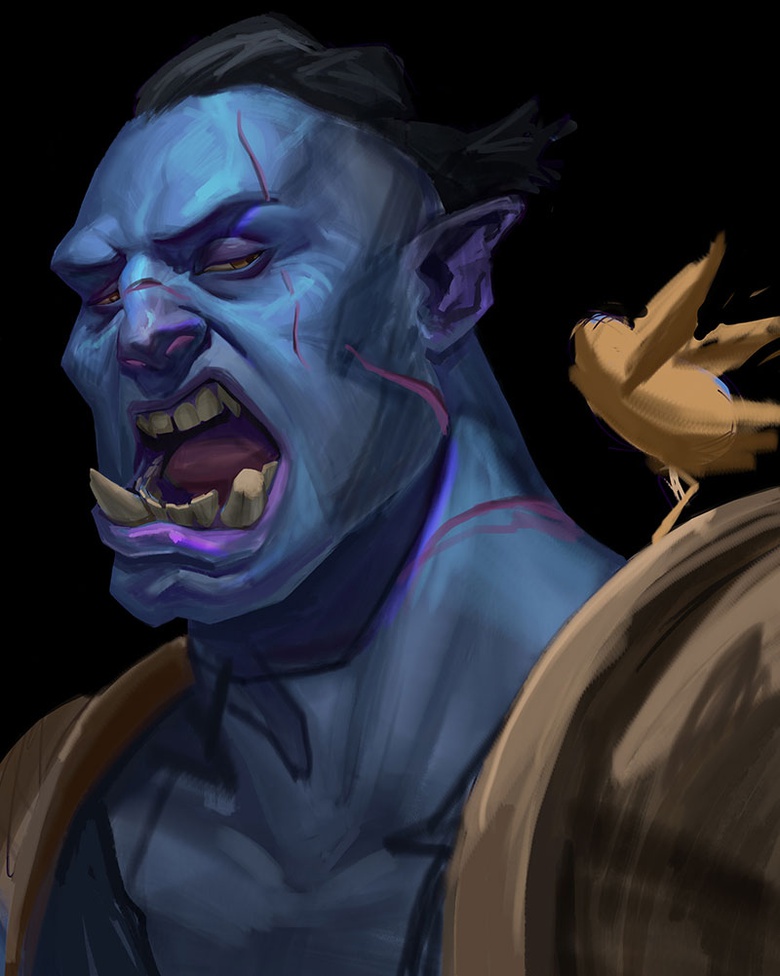 After adding more contrast, it was time to start refining and adjusting what I had in front of me, to make it look better. I cleaned the surfaces and, using a mix of a smooth textured brush, and a hard oily chalk, I started working on the edges, always sticking to the shapes I had defined previously. Hard edges on focal points, softer edges on the not so important places, always trying to detail and clean-up as much as possible, to make it presentable. 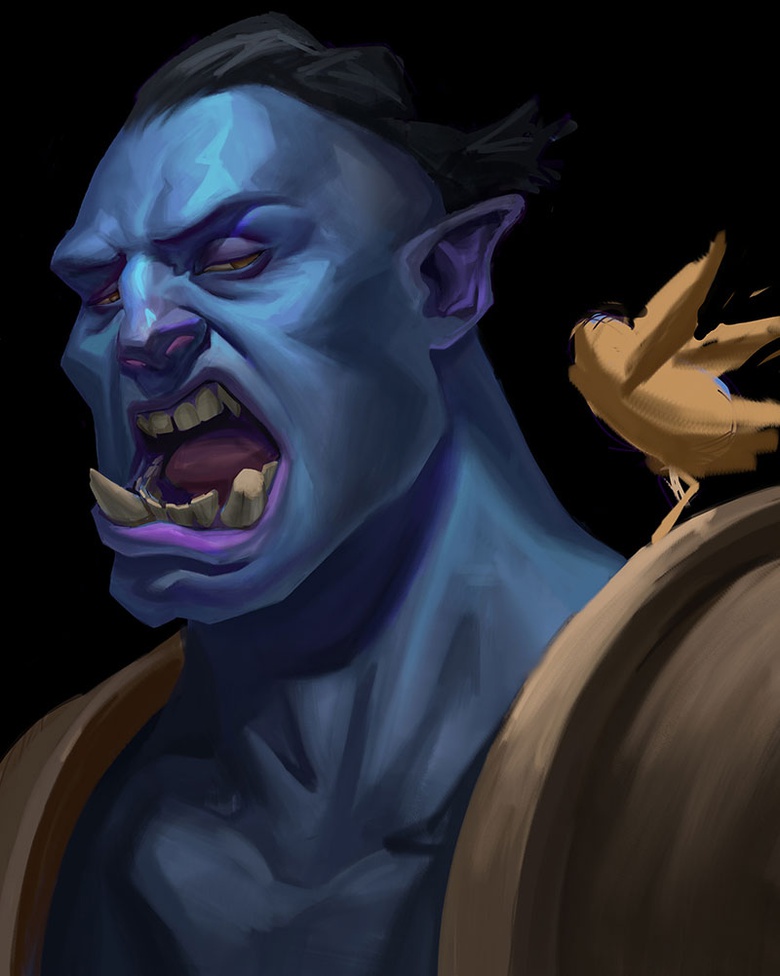 Here I was pretty much satisfied with the look of his face, but I noticed that the image had little to no space to "breathe", so decided to widen up my canvas and ended up liking it more this way. I ended up darkening a bit of his neck as well, because it was too bright and it took too much attention from his face. Finally I started working on his shoulder plate and the little bird. 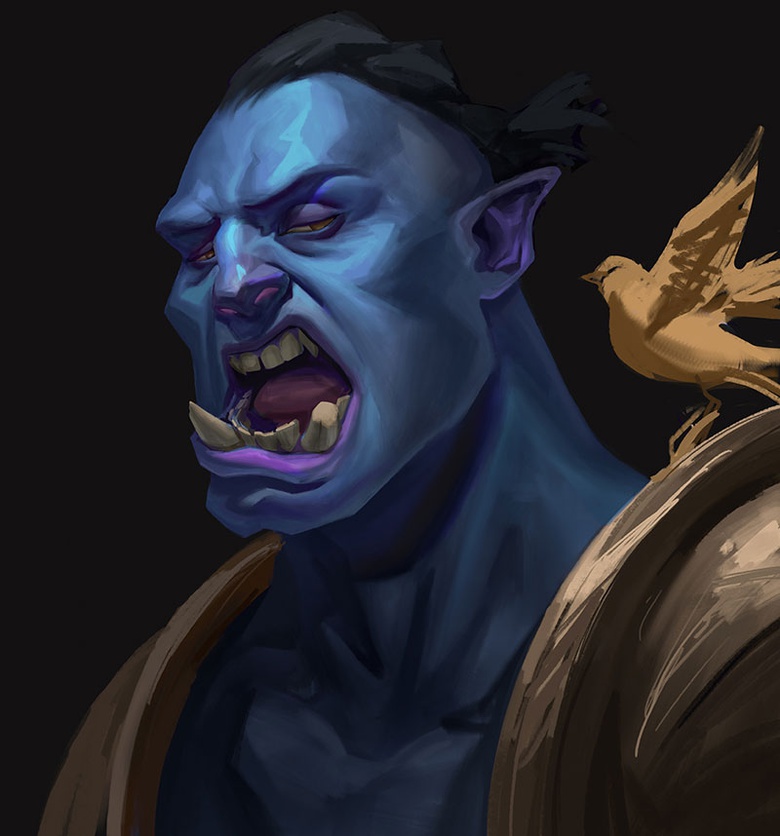 Still not satisfied with my image format, and with no space to show the little bird properly, I ended up widening the image much more. I darkened his eyes for readability, and worked on the shadow/light shape of the little bird, while using a rough and hard brush on his shoulder plate to give that hardened old, orcish metal look, and started detailing the final image. 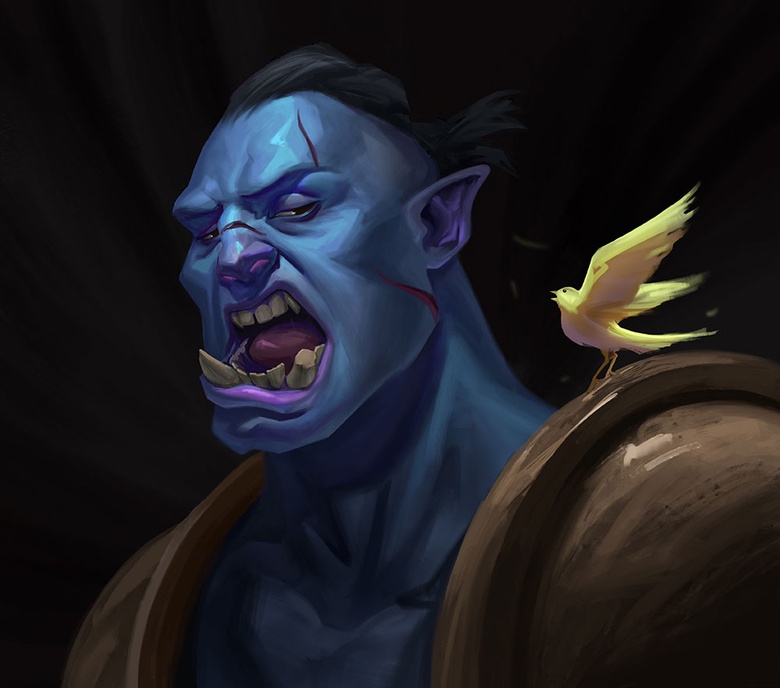 At this point, everything I wanted to do was pretty much there. I just needed to adjust the little bird to my liking, shrinking the size of his wings a little bit, and adjusting the yellowish tones (which is a good contrast to blue). After that, I used a Sharpen filter to make my main focal points sharper, a slight blur to the rest of the image, and then added a Noise filter because I think it usually looks cool and it gives an 'old tv' feeling to the image. 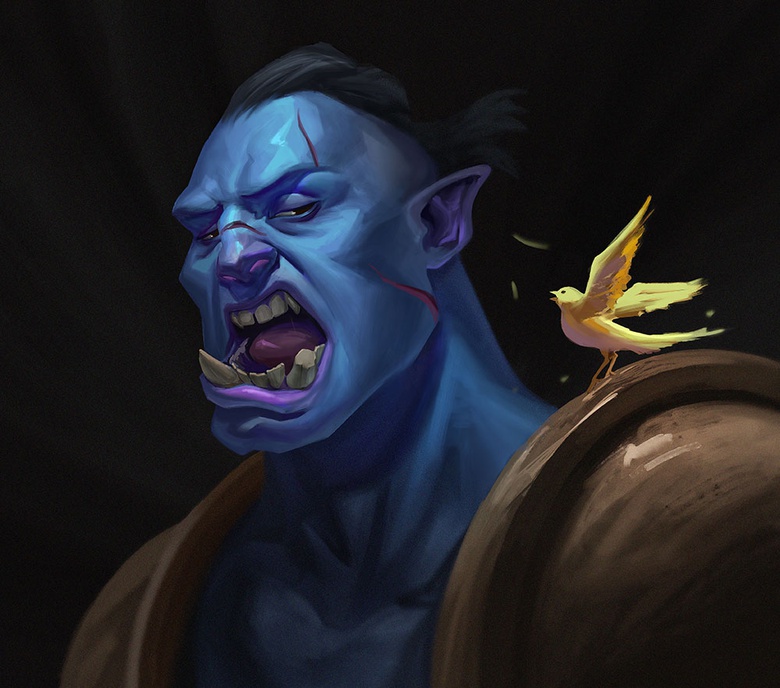 Marco on Instagram
Marco on Tumblr
Grab a copy of Beginner's Guide to Digital Painting in Photoshop: Characters