Narrative tutorial: Making of “The Monolith”

What are the important elements from the text to focus on?
In my opinion this text outlines three characters; our narrator, the monolith, and the relationship between the two. I imagined a feeling of forced prostration in front of an hypnotic, gigantic artifact, pulling everything in with just its presence. This gives the setting already for our illustration. The monolith is mumbling and working and something is about to happen, but somehow the text gives us a sensation of peace.

What goal are you looking to achieve with the final piece?
With this image I had a double goal. First, I wanted to realize a frame of a hypothetical animation,
and then I wanted to explore a bit with the possibilities of using 3D which is my main tool in my day to day job. I wanted to create something colorful as well.

I always collect references for every piece I do. None of my reference are in the final image, but this helped me to create a visual map of colors and shapes in my mind.

Start to get your head around it

First of all I want to translate the images coming in my head into actual images on screen. A good way to do this is by starting with a very loose sketch. At this point it is just important to nail down our main layout and camera angle. Then I draw a perspective grid in Photoshop - you don't need to be precise. This creates a space, a sensation of space where we can work.

I already knew the position of the monolith I had in mind so that will be one of the main elements. My first sketch is very loose, it's just a scribble, to have a visual feedback of the scene. Then I can refine it a bit using my grid. With this grid I can always create different solutions with different compositions.

With the introduction of a quick perspective grid we can turn a scribble sketch into a more refined sketch inside a space. We can play with it to find different solutions

Now I move on to dressing the sketch I already did and make it look sexy. Don't be afraid of using photos and Photoshop adjustment layers to enrich the image. I want to do my final in 3D, but this is nice for me to start having confidence with what I want to achieve, and how the camera and everything will look.

I do all these passes in black and white just because it's easier to focus on the general image and values from black to white when I just want to see something quick. This will be a visual reference for me later.

I use brushstrokes, photos, and texture, basically everything to compose the image. Watch your values to convey the light feeling

Let's repeat our sketch process, but in 3D!

Now I have my own reference and I can go straight into the world of 3D. I usually use 3ds Max to do realistic or semi-realistic kind of works, but this time I wanted to experiment and create something different. I have no idea where I'm going, and this is what makes it interesting. At this point we can model everything using simple plane or box modeling, and honestly you can just model using whatever topology, you are free at this point.

The most important part besides having a good idea and possibly a sketch is to bring in a human model (in this case our monolith staring guy) to the 3D scene, just so we can set the scale. I use simple techniques for modeling that can be replicated in every 3D software. The base model for the cliff was created by extruding a plane and shaping it. Everything is pretty much a plane in the scene. The cliff was then sculpted in ZBrush and decimated.

3ds Max and V-Ray have a lot of native procedural maps and they can be combined to achieve a lot of cool effects. All mountains in this scene were done using a height map on a plane with a displace modifier on it. Create a new plane in the position where you want your mountain to be and add a displace modifier. Use a greyscale texture to drive the distortion of the mesh. The more polygons, the more detail! This is just a quick technique for displacing geometry in viewport, but will be enough for our purpose.

For this image I wanted to experiment with a different type of shading. V-Ray have a toon node, capable of rendering out the outline of our objects. I have used this and a custom made toon shader to achieve my effect. The toon shader is a blend material composed by a light mtl which is using a gradient map to control the color. The gradient in 3ds Max is set to "lighting" with a "solid" interpolation. The remaining materials nested in the blend are another vraylightMtl with the color controlled this time by a falloff map (using Fresnel type) to give the shader some fake rim lights and a pink material controlled by a vraydirt node. At this point you just want to be creative and experiment to do your version. 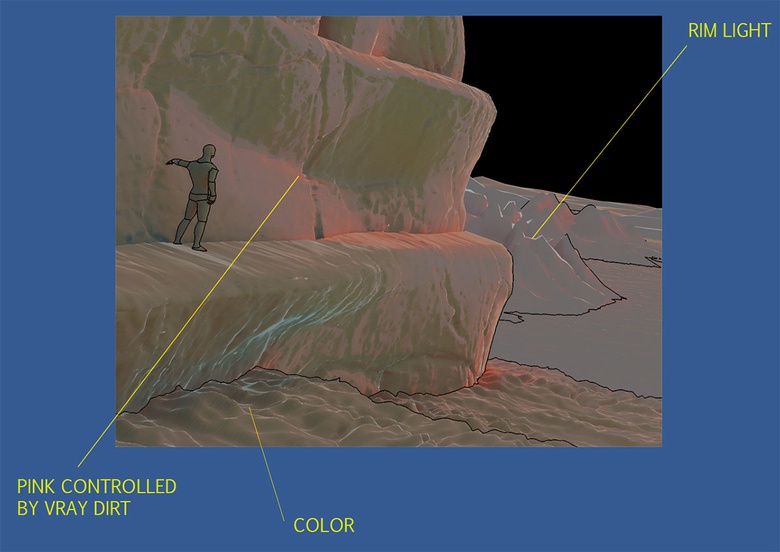 You can see the outcome result of this kind of shader. The lines are from Vraytoon effect, and you can see we have a kind of a contour light obtained using a falloff map as a color for the shader, and the general color is the result of the material using the gradient map plus my pink material controlled by vraydirt in the blend node

Time to add colors into the mix. I need to create different passes to have flexibility in comp, and also to spin my coloring. I achieve this by rendering an atmospheric pass, a color pass obtained by doing a really simple texturing on the scene, and one with my custom cel shader and a line pass using vray toon effect.

These passes will be composited inside a compositing program to obtain the desired result. My choice was Fusion. I have just layered these passes, and the color was obtained by mixing and color correcting both the texture pass and cel shader pass. I have rendered a matte pass as well for selection. This will be useful during the painting phase.

All rendered passes and the final result of compositing them together

Now we can bring our composited render into Photoshop for painting. I start by painting a background sky and enhancing the overall lighting a bit. I use a photo as the base for the sky, and then I work with brushes to integrate the render and add diversification to colors.

You can see all the layers composing the sky

Adding colors to the Monolith

The Monolith is our main element here so I like to make it more interesting by adding colorful details like tiny spots of lights and some hint of an ancient symbol, well, kind of. I use the matte element to select the monolith or invert the selection.

Adding details to the Monolith

So we've been reading the text and blocking out a simple 2D sketch to fix the image in our minds. Then we went with 3D and built the scene. The key factor is the rendering in this example, which I wanted to be experimental and cool. Research techniques to do cel shading in your own software, and try mixing that up in comp with texture passes or lighting passes and see where this takes you!

I was able to obtain a detailed mixture of colors and texture and I am satisfied with the finished result. 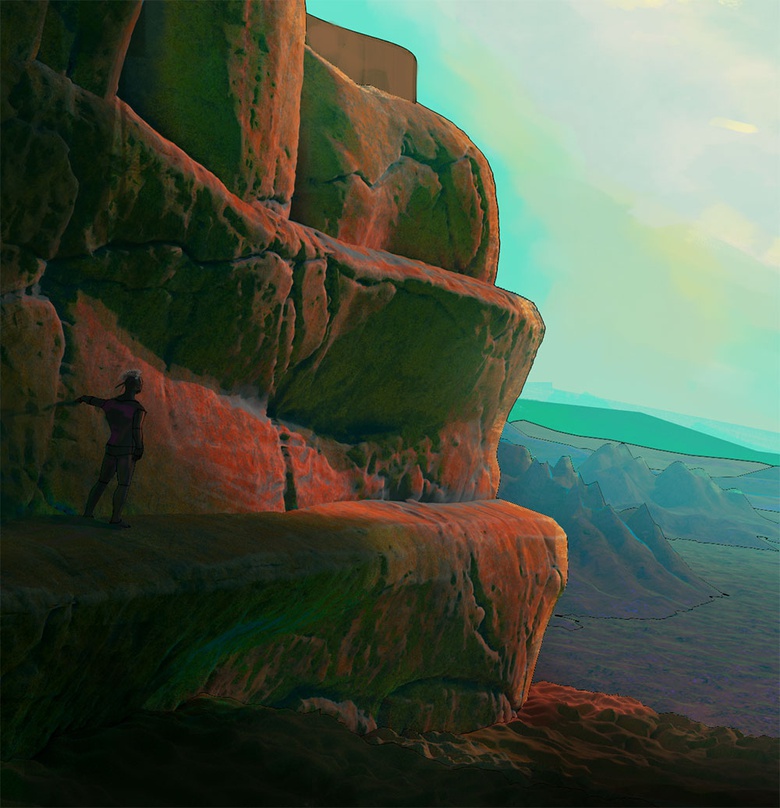 A close-up of the finished image. I gave the character some extra love by painting more light to make him pop out a bit, and also gave him a nice hairstyle