This project will be exploring the above text and be made up of a couple of tutorials where we’ll be covering my process for Character design, Composition, General Techniques, and Foliage. I am using Photoshop and a Wacom Tablet for this project.

“Hedychium densiflorum, known colloquially as the ginger lily, cast its fingers of scent towards the wild copse and winding paths at the edges of the dense, thick wood, hoping to ensnare two would-be delinquents passing through on their way to the Woodsman’s mortared cottage. Trygve and Yrsa, rushing along, sniffed at the air and found themselves, without thought or purpose, turned on their heels. They followed the scent through the dense, thick wood, filling their shoes with mulch and mud; bits of bush and low-grabbing branches painting scratches of red upon their skin.

Where the wood was its densest and the boughs its thickest, it was conversely the brightest with sunlight gushing forth from Night Phlox afire; painting the little house with life sitting quiet and mesmeric. Ivy and lily spindled and woven, into walls and roofs and windows and doors. A porch of roses and splendour, unthorned by the magic of the dweller’s charm. She sat on a swing made of daisies and perennials, and rainbow rhododendrums. A little wave waving at the end of her slender arm, her smile full of teeth. Hair lost to the shadows as dark as them. Her dress of flowers flowing across the blanketed approach, that moved in Trygve and Yrsa’s periphery. Thin snakes all around except for when they looked for them. The lady of the spells rose, as though aided by the wind or the house itself. “Welcome,” she said.”

Trying to go for a very classical feel with the main character – simple and elegant. I’m using some of my favorites as references here including John Singer Sargent, John William Waterhouse, Brom, and James Gurney.

Sketching out some rough ideas. Note that these character designs are for a finished illustration so i won’t be worrying about sketching out all the details as i would if i was designing for something like games or films. I want to do something interesting with the fabric of her dress, giving her a very classical look without it seeming too Greek. The other characters will be a bit more noticeably Scandi inspired and I'd like for her design to tie in well with theirs, for this reason layers of fabric as well as fabric belts and ropes seemed like good design elements to incorporate.

I wanted to try out some ideas for the face. She’s definitely a witch of sorts, but I don’t want her to be menacing. She’s alluring, almost kind looking, although it’s hard to know what her intentions are. There needs to be a bit of mystery about her and hopefully I can get that across in the face.

From the text we know that she has nice long hair. I wanted her hair to be a bit more interesting than just hanging loose. She lives out in the woods so maybe something a lil’ wild might suit her. I wanted to try out flowers woven into her hair but as you can see it’s important to find the balance between something that feels too royal or beauty queen-ish and something a bit more natural and wild.

Combining all the things I liked the most from my sketches I came up with this. Looking at it though, the colors don’t feel at all right to me in this and she’s feeling far too clean/royal.

I do some quick color sketches to see if i can come up with something that works better.

Applying these new colors to what I already have feels much better, the greens and plums are earthy and mystical, much like her character. Despite the color changes she’s still feeling a little too fancy to me, so I’ll be looking at the details next.

I replace all those gold clasps with knots, this feels more organic in a way and brings her down to earth a bit. I give her some smudgy makeup, add some ferns to her hair, and give her some classic witchy essentials strapped to her belt. I’m also giving her some faded floral details on her dress for a little bit of added interest as she’s got a lot of fabric on her, and I didn't want this to become repetitive. I’m hoping this fade also makes her clothes seem somewhat dirty and worn, she is after all a lady of the forest and likely quite used to working with the plants surrounding her cottage.

For the final image I’m keeping the overall drawing quite rough as it doesn’t really benefit me at this time to render it up any more, I will be using this as a reference for the final illustration.

For the designs of Trygve and Yrsa I've opted for a somewhat Scandi inspired design. Their clothing will be simple as they’re not particularly wealthy, I'm imagining them as runaways, and so won’t have too many details but will include just a little hint of traditional Scandi attire.

As before, I’m doing some very rough sketches to try out some different outfit designs. I’m imagining that they will both carry a satchel of sorts, probably containing all of their belongings. I’d also like it if their clothes had something in common to indicate that maybe they were bought together, or that they could be siblings. 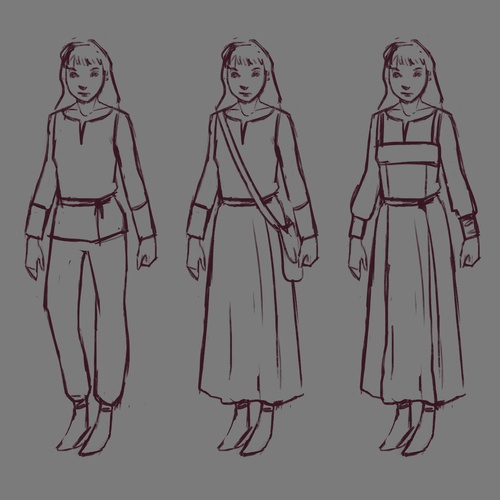 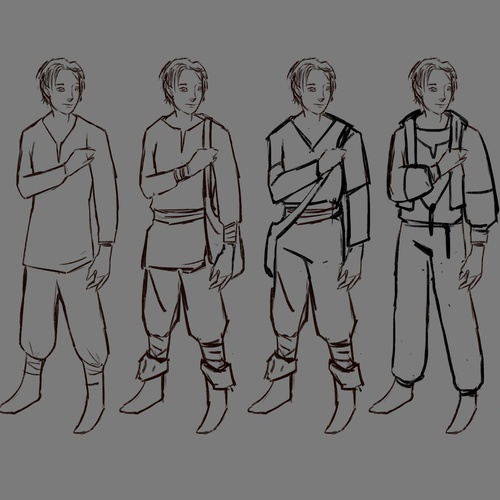 Trying out some hair designs, as with their clothing, I’m not looking for something fancy here. More than likely they haven’t touched their own hair in a few days, it’s going to be a bit rough around the edges. I want to give Yrsa a look of innocence and Trygve should look young but tired, like he’s been overworked for too long. It’s touches like this that help to tell a hidden story and gives your characters some depth.

Here I’ve chosen my favorite elements of the hair and clothing sketches and drawn them out more neatly. I’m going for colors that are dusty and muted but I also quite like the idea that their clothing might have been dyed in brighter colors initially, and that the dye has faded and worn away over time. This would allude to a more interesting history as typically dyes would have been associated with wealth. Maybe the clothing was stolen or maybe they’re runaways from a family who were not as poor as they are now, or maybe they just worked for a wealthy house at some point and were gifted these items. 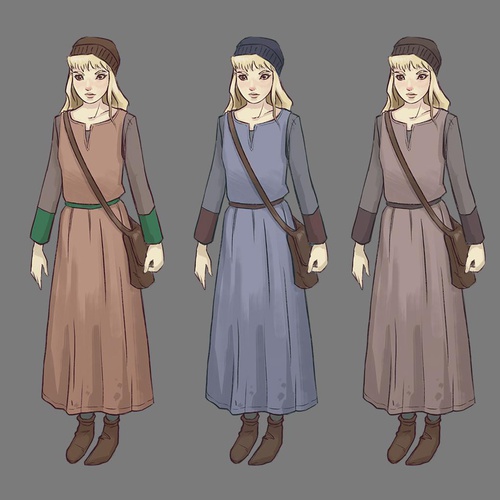 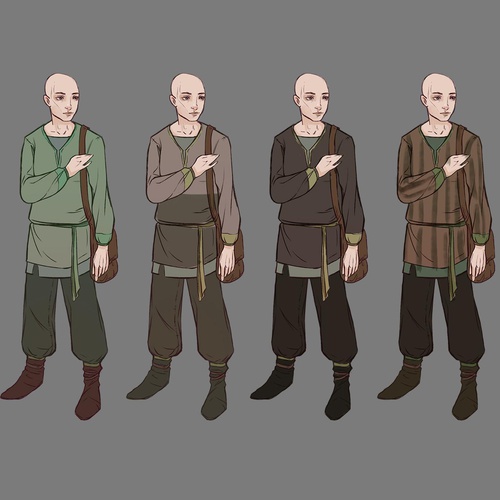 I’ve given them both two tone sleeves and matching collars to unify the two. Yrsa’s sleeves will have some simple Scandi styled embroidery, again to allude to a somewhat interesting history behind the clothing. She has some colorful beads strapped to her belt, this might be a personal item, maybe even a good luck charm. She’s also wearing a scruffy hat to keep warm. Trygve has some patchwork on his clothing, more than likely stitched by Yrsa. His clothes are a lot more worn than hers, indicating he has had to endure some harder labor.

As you can see I've kept all of these designs quite rough but they have been a good way for me to formulate my ideas on these characters before weaving them all into a much bigger and complex illustration. In my next tutorial I'll be exploring composition and start planning out the bigger picture.

Read the next chapter of this tutorial: