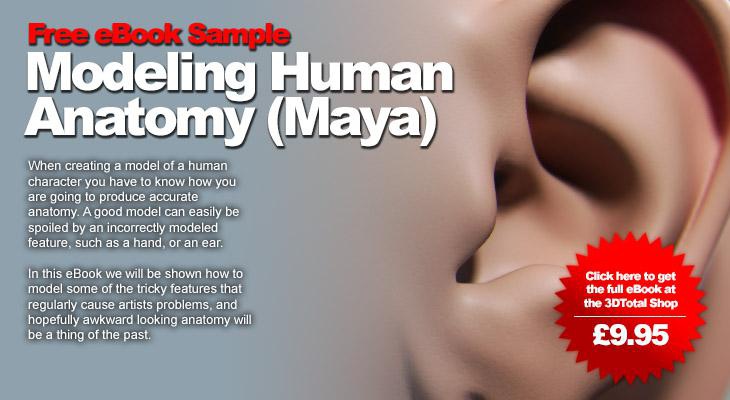 The human ear can be a complicated object to model given its intricate folds and subtleties. Ears can actually give a lot of personality to your characters; tiny ears on a long face can make a person appear goofy, thick cauliflower ears on a hard face can add an extra level of detail to a rough character. In order to pull this off an understanding of the human ear is needed. I will show you the basic steps I take to create a human ear, which can later be translated to most realistic or stylized characters.

I commonly use the edge extrusion method to build my base models and game assets (Fig.01). This begins by creating a grid with no subdivisions, then grabbing an edge and duplicating it using Shift + Right Click > Extrude Edge and moving this new edge to a desired location. For the ear begin by building the shape of the outer edge, curving it into the center of the ear and to the tip of the lobe. 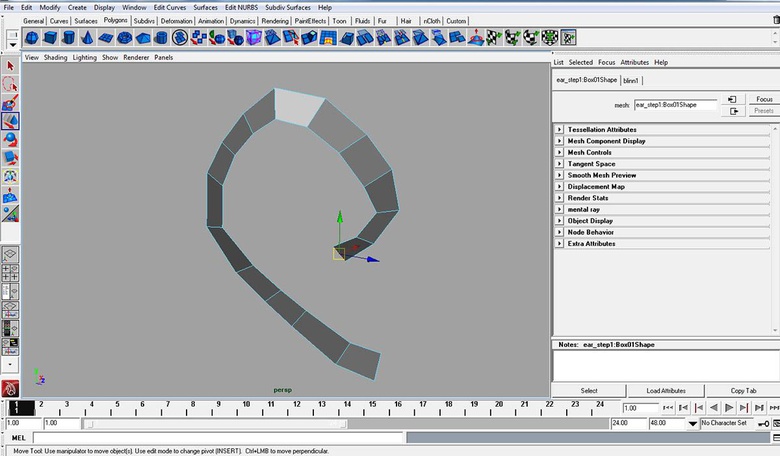 Once that shape is blocked in, select most of the edges on both sides of the newly created strip and duplicate and extrude them inwards to create the anatomical part of the ear known as the helix. Make sure to leave enough open edges to begin building the ear canal and the bulk of the lobe (Fig.02). 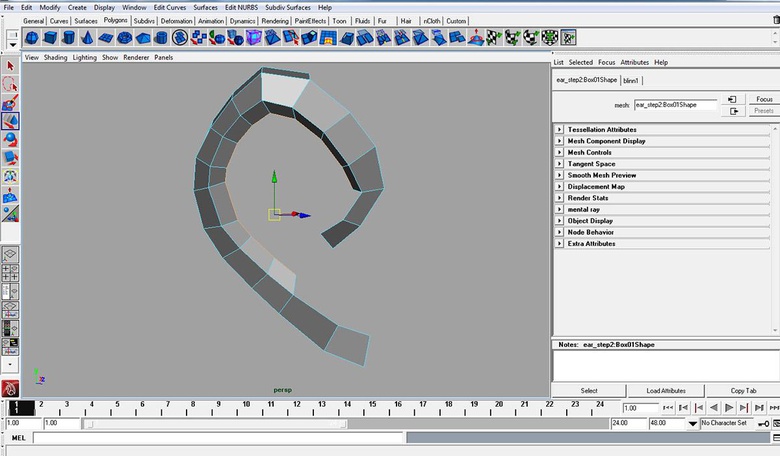 Select two edges from the tip of the lobe and the end of the helix, press Shift + Right click > Bridge. This will add a few subdivisions that will eventually become the tragus and will, in theory, connect the ear to the head. Then create the basic curve using edge extrusion; this will be the foundation for the antihelix (Fig.03). 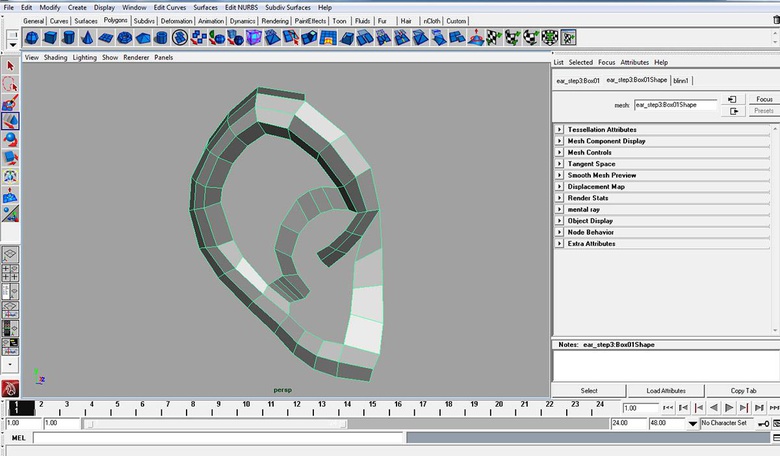 The next step is to fill in the canal section, creating a rim which will eventually expand into the antihelix and antihelical. Do this by closing off the antihelix inner rim and extruding the edges inwards. I try to let the helix melt into the canal as much as possible, leaving the hard edge more towards the helix as it comes out of the ear (Fig.04). 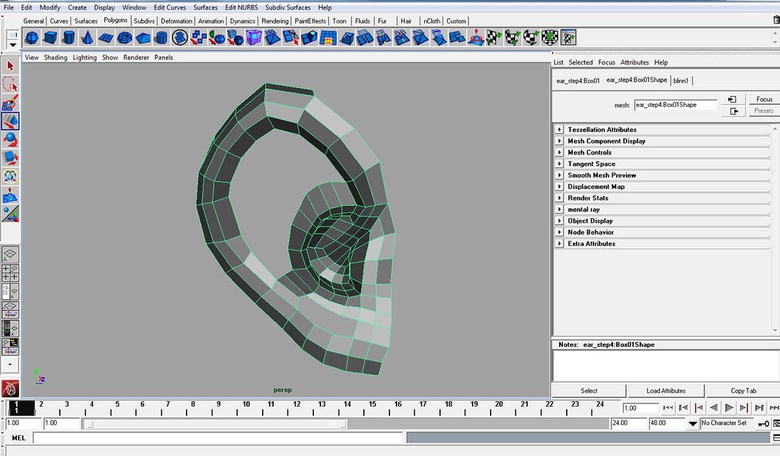 Here is where things start to get busy, at least in terms of mesh density. Fill in the outer ear, trying not to think too much about clean topology. This creates the bulk of the ear, and will create the basic shape of the antihelix (Fig.05). 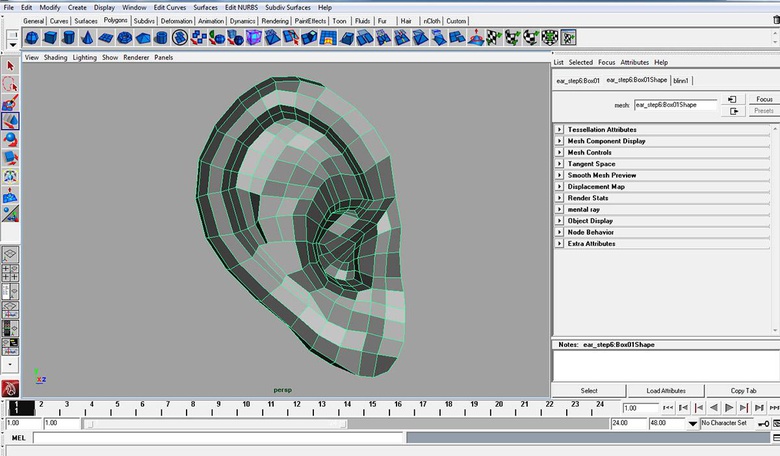 To create the antihelical fold, select a few of the edges towards the top right of the ear, running down to roughly just above the beginning of the tragus. With these edges selected, connect them with just one edge and cut that edge into the mesh, creating a floating point in the center of a polygon that can later be closed and made into quads. This will create a nice shape for our antihelical fold. Then select the faces in the center of this valley and pull them in, refining the shape as you go along to smoothly follow the antihelix (Fig.06). 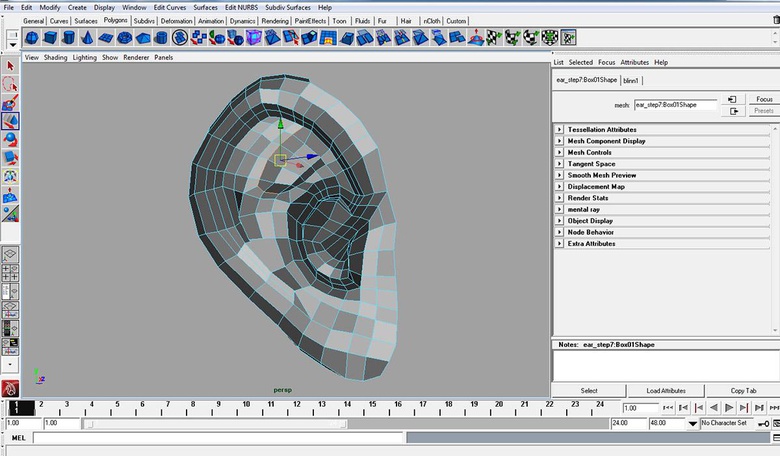 At this stage the key anatomical parts of the ear have been created so we can start to clean up the topology. When doing this, avoiding triangles isn't necessarily a requirement. It is best to place them where skin will fold and create a crease when smoothed out. For my ear I chose to close off two of the edges running towards the lobe using the same technique noted above, using the Shift + Right Click > Split Polygon tool. Then I created a floating point in the middle of two faces that will later connect to pre-existing corners which keeps the mesh nice and clean and will mean it will subdivide without pinching when using smooth (Fig.07). 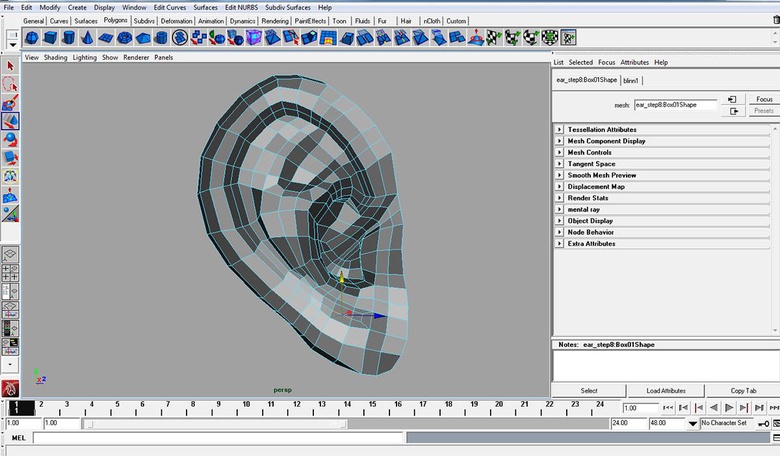 Next begin refining the ear's shape and build out the back of the ear where it would connect to the side of the head. You may notice that the helix of this particular ear model is a touch too fat, so grab the edges of the outer rim and brought them together. Also give the ears more of a point; in previous steps you will notice that they were just a little too round which can give a less realistic, cartoony feeling (Fig.08). 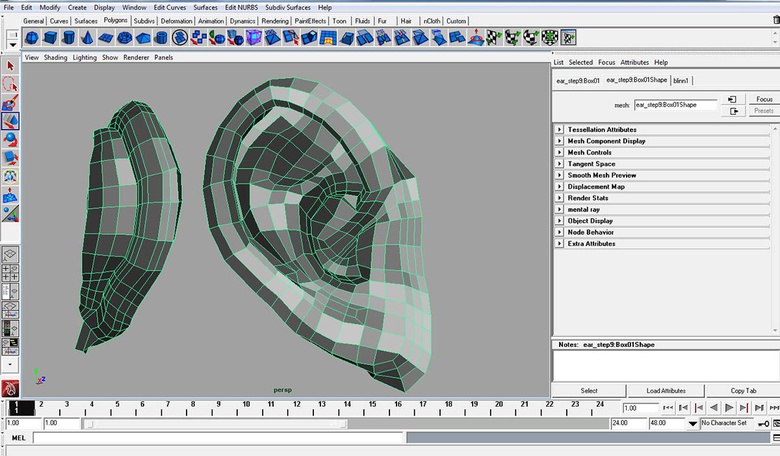 I really want to give the look of an attached lobe for this particular ear, so we're going to bridge the edges that would be on the bottom of the lobe to the edges on the side of the head, extending up to the helix which received the same treatment. This makes the ear look as though it melts into the head. Also at this point you should select the outer edge of the ear, extrude it inwards (towards where the skull would be) and then fold the edges in to create the back of the ear. From here continue the process and create the reverse side of the canal, creating a ridge just before the theoretical connection to the head.

From here, I recommend making sure that none of your edges are marked as hard edges to avoid display errors. Select all of the edges of your model while in Edge mode and press Shift + Right Click + Soften Harden Edge > Soften Edge. This will make all of the edges smooth evenly when subdivided and can help avoid errors if exporting into other applications. Hard edges can be useful for retaining crisp edges without adding a ton of geometry, but generally I reserve this for inorganic items (Fig.09). 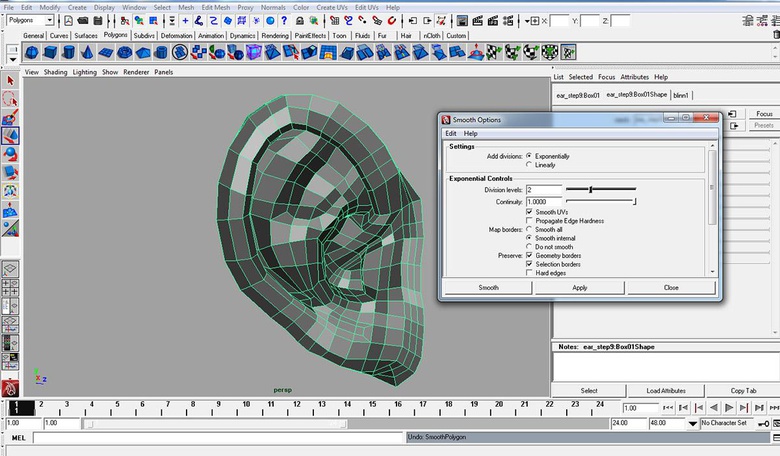 The last step is fairly straight forward. Select the ear mesh and then navigate to Polygons > Edit Mesh > Smooth (Options) and set the level of Smooth to 2. This subdivides the mesh multiple times, adding more geometry, and gives you a better idea of what the ear will look like when sculpting in ZBrush - or it could even be used as a target for a Normal map (Fig.10). 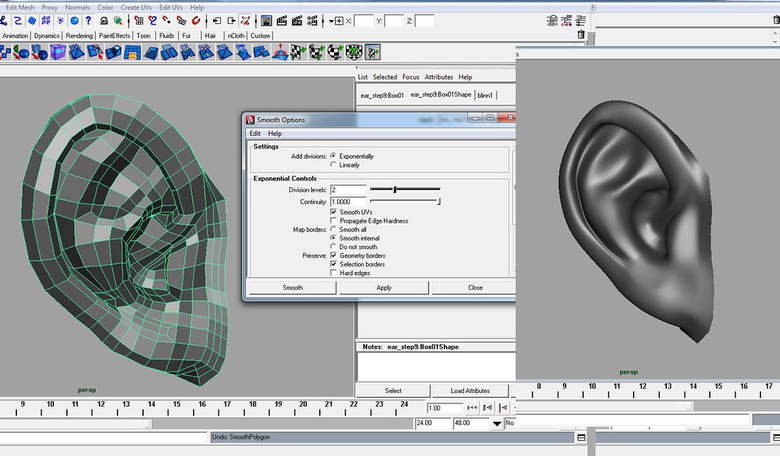 To see more by Gavin Goulden, check out 3D Masterclass: The Swordmaster in 3ds Max and ZBrush