JH Park talks us through the workflow involved in the cloth creation process. 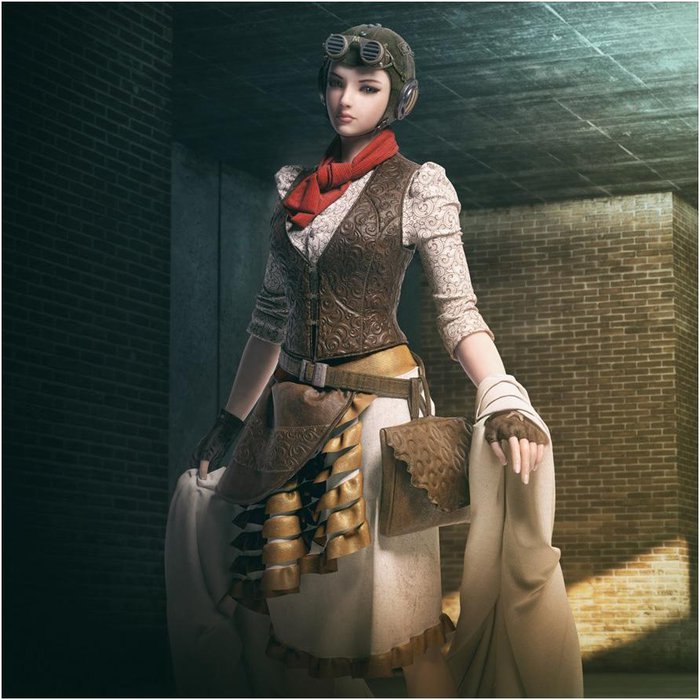 Using Marvelous Designer to create fabric elements for a character

JH Park talks us through the workflow involved in the cloth creation process.

This is simply a prototype test using the Marvelous Designer program.

I used Marvelous Designer to create not only cloth, but also a waist bag, a scarf, and fabric that shows micro-detail such as wrinkles and stitches.

First, import the OBJ female model (Avatar) from your chosen 3D software, into Marvelous Designer. I use the Opencollada or Geometry Cache format to import both my starting model and the animations with it. 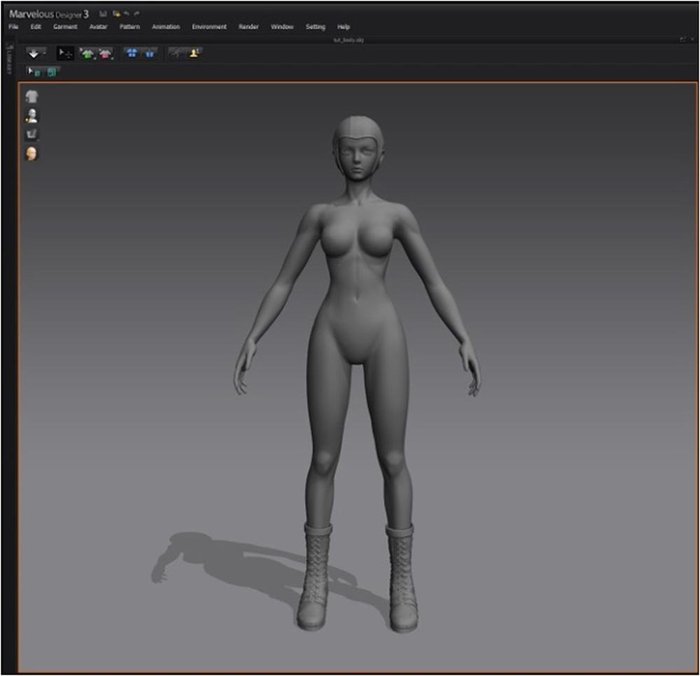 The model imported into Marvelous Designer

I start creating the innermost shirt first since it should be first layer outside the model's physical skin. 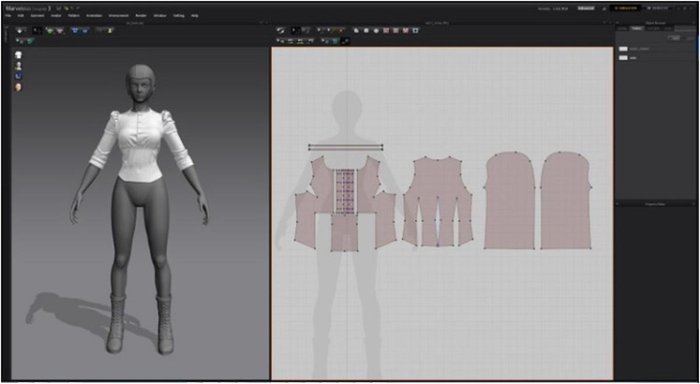 This will be the final look of the inner shirt

In order to create proper shapes, I search for fabric patterns on Google. You can find basic patterns for shirts, pants, dresses, and so on, from the internet very easily. I also use several tutorials from the following link to create the patterns: Here

There are many instances where you'll be able to make internal cuts, as indicated by red circles in this image. Marvelous Designer uses the width of these cuts rather than using the vertexes used in most 3D software such as 3ds Max or Maya. 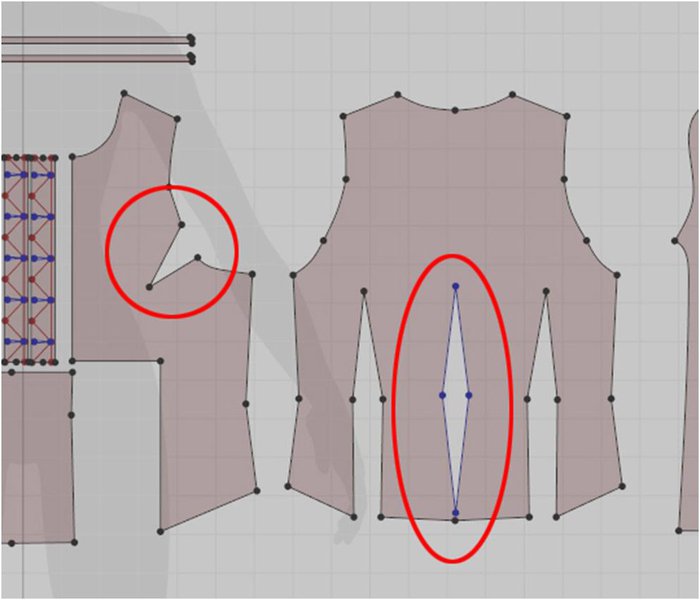 Using researched patterns as inspiration for the clothing

It's necessary to create different lengths on the seam lines to create the puffed sleeve shown in this image. As you can see here, the lines marked with red and yellow color show how the two parts should be attached. The excess fabric on the sleeve part will naturally ruche when fitted to the smaller bodice section to create a puffed sleeve. 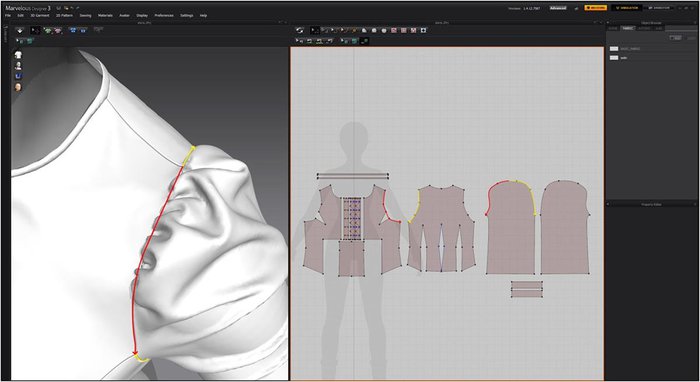 I then apply the color texture to the final shirt model as shown here. The UVs are already laid out based on the shape of the pattern in the pattern view, though you can change it from another 3D software. 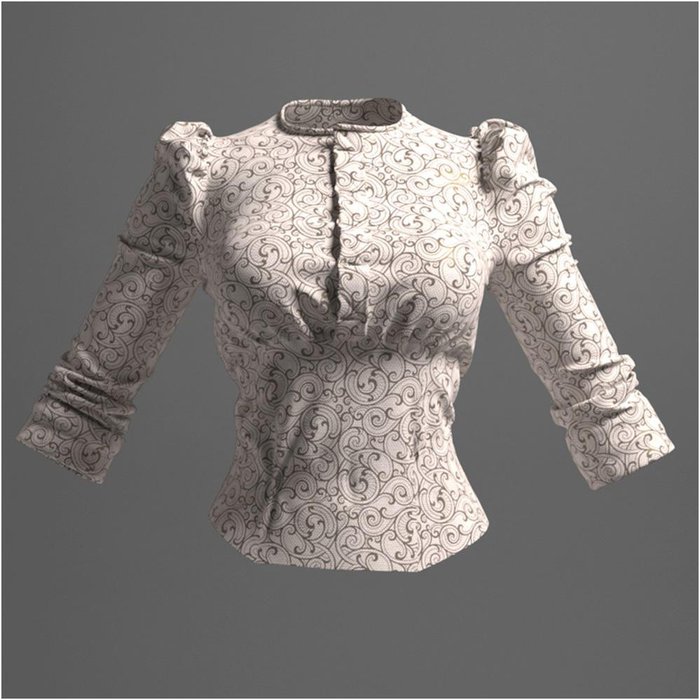 The assembled shirt with a patterned texture

The skirt is created easily by simply adjusting the length of the clothing pattern to create the amount of wrinkles I want. 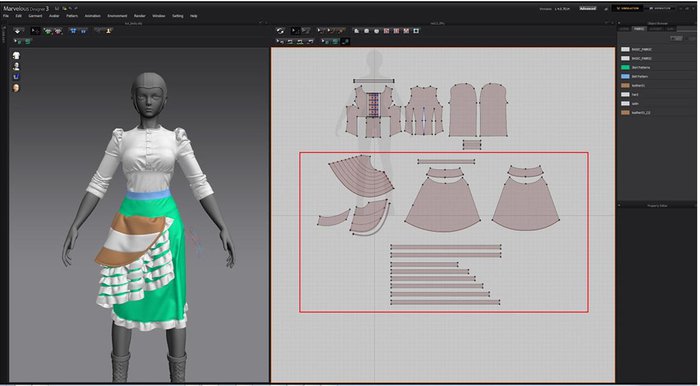 Adjusting the pattern to create the right look

I apply the color texture to the final skirt model. Again, the UVs are already laid out based on the shape of the pattern in the pattern view, unless you want to change it from another 3D software. 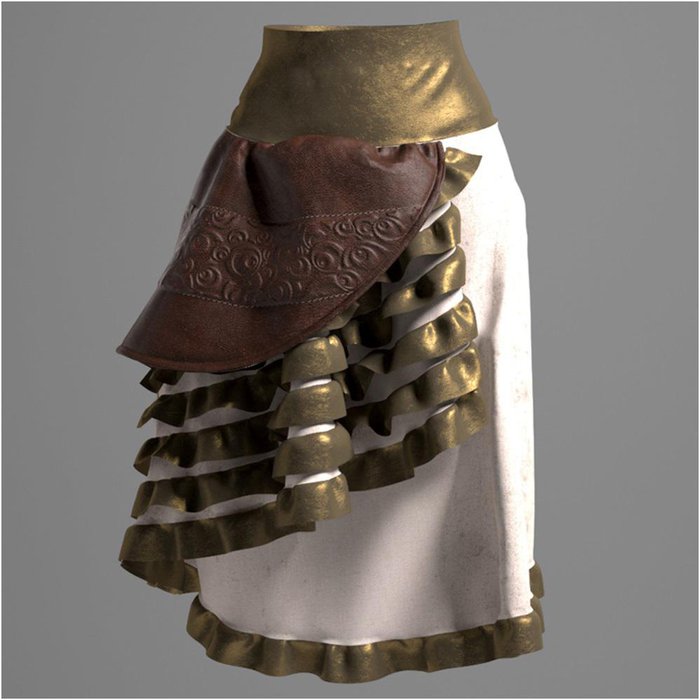 Adding texture to the skirt

The vest was created next. I ‘Freeze' everything except for the vest to make it easier to select and simulate the vest without changing any of the other inner clothing parts. I duplicate the exact same patterns and use them for the padding as indicated by red rectangle. It's very easy to shape the volume with the tools in Marvelous Designer. I also create the patterns in Marvelous Designer and add some hooks at the center of the vest (as indicated by yellow line). 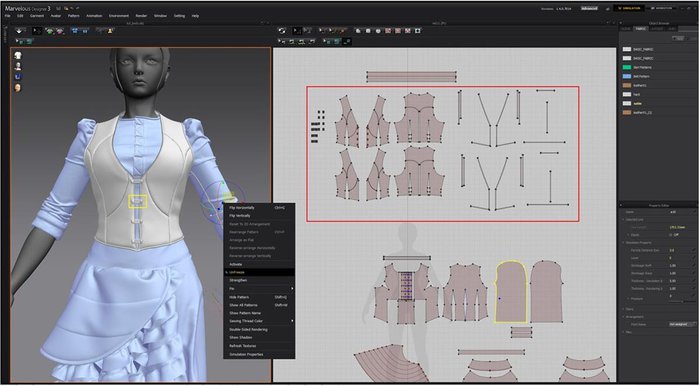 Working on the details of the vest

I apply color texture to the final vest model as shown here. I also use ZBrush to project the organic patterns onto the vest at the final stage. The UVs are already laid out, based on the shape of the pattern in the pattern view, though you can change it from another 3D software. 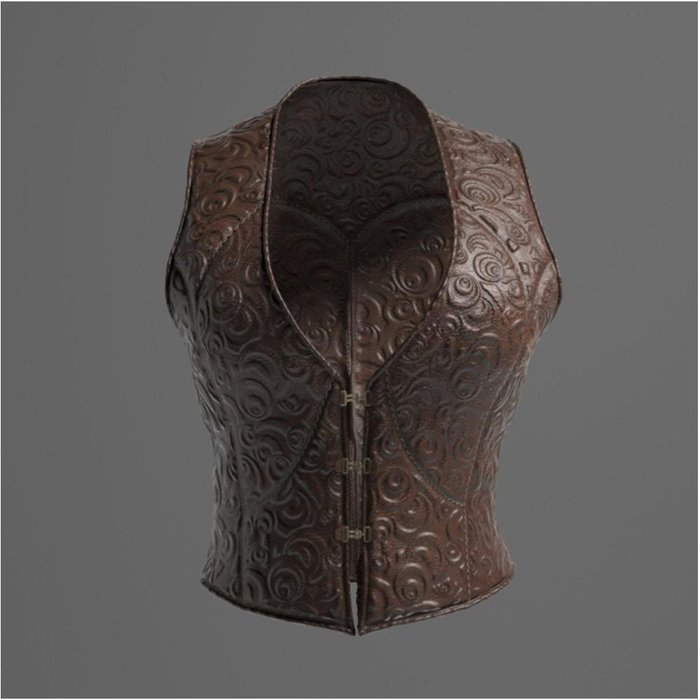 The final look of the vest 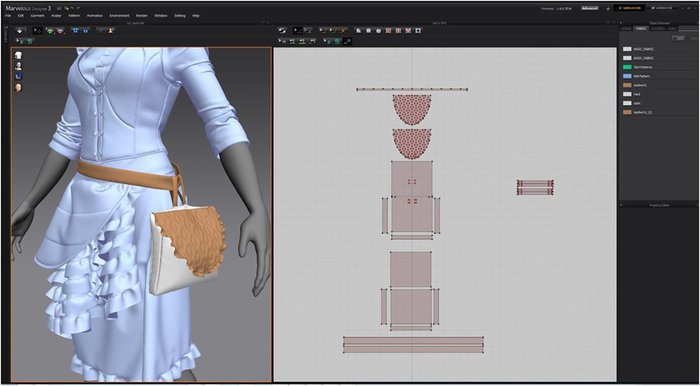 As before, I apply the color texture to the final bag model. The UVs are already laid out based on the shape of the pattern in the pattern view, though you can change it from another 3D software if you need to. 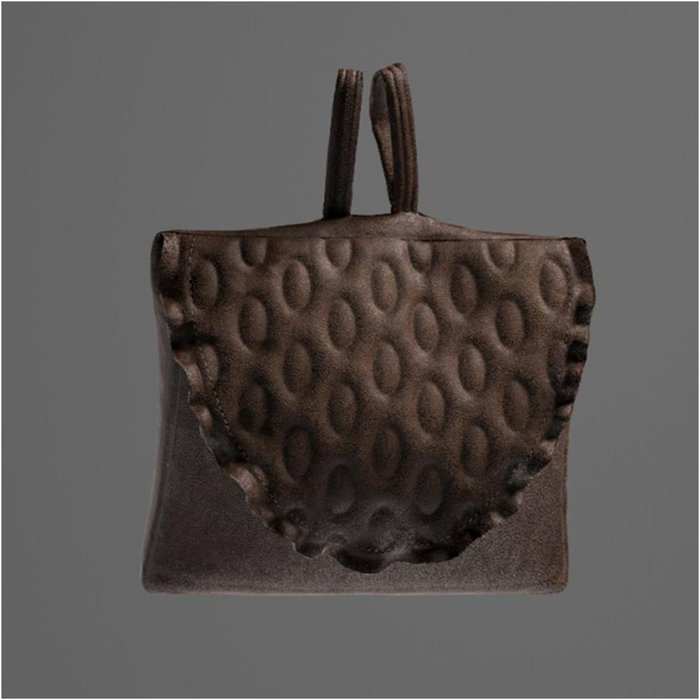 Adding the textures to the final bag model

The scarf is created last since, as it will be the outer-most accessory of the clothing. I create it using the same padding techniques as used on the bag. 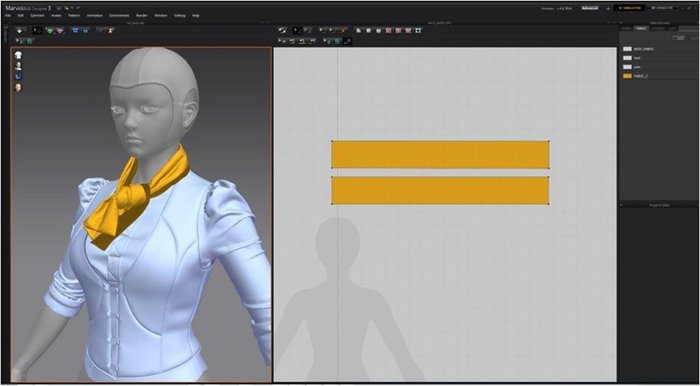 Using the padding techniques to create the scarf 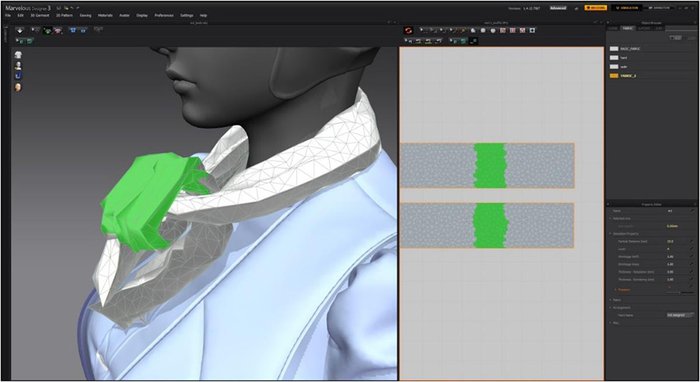 As before, I then apply the color texture to the final scarf model. The UVs are already laid out based on the shape of the pattern in the pattern view, unless you want to change it from another 3D software.

The rest of the workflow is then completed in ZBrush and 3ds Max. I use ZBrush to add the high detail in the clothing mesh, and then extract a Normal map and Displacement map from it. 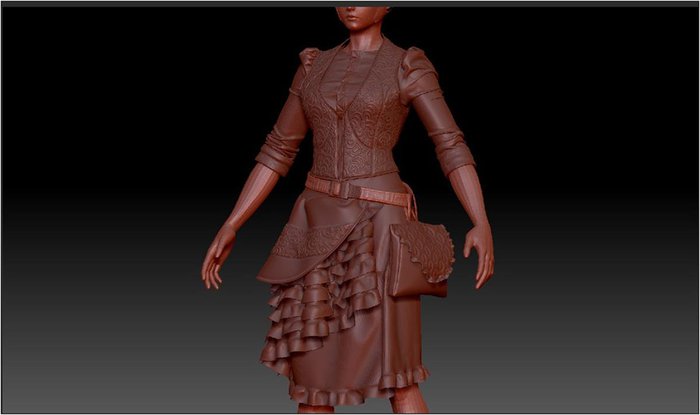 Moving over to ZBrush to work on the texture details

MARI is used for the texture process since it has strong texture creation tools, and V-Ray in 3ds Max adds an extra quality to the final render. V-Ray V3 has improved its Ray-tracing rendering techniques, which helps a lot. 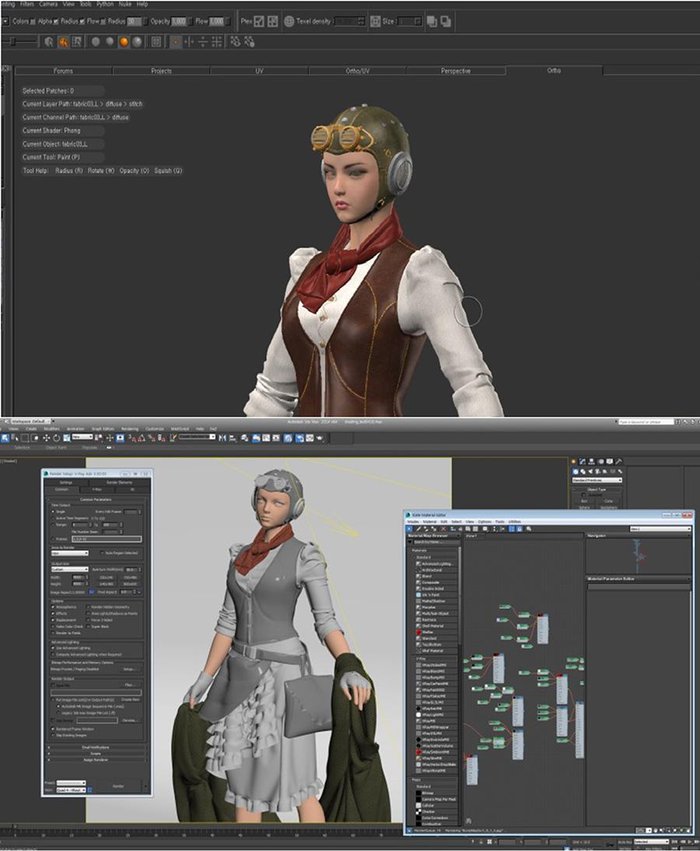 These show the maps I use (Displacement Map, Normal Map, Color Map, AO Map), and the different rendered layer images I create at the end of the process, so that I can composite them together to finish the final image.

I am a 3D generalist and mostly spend my time on lighting and effects. I have been impressed by the whole process of Marvelous Designer, with its powerful simulation modeling process for clothing creation. I am sure that many artists will feel comfortable enough to control the program to create fabric elements in both quality and quantity.

Marvelous Designer is designed for the artists to create successful virtual clothing in both quality and quantity. I recommend you use the following techniques for character clothing; wrinkles, padding, and layer simulation. 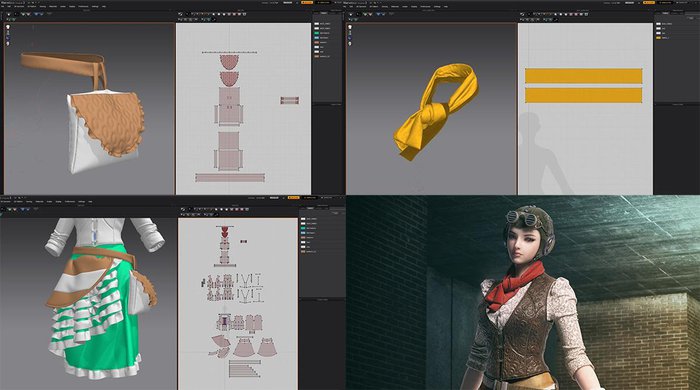