This is an overview of how I created the Laser Cowboy project, from choosing the concept until the post-production.

I'm always on the search for incredible new stories, looking for concept art that has never been told in 3D before. I try to replicate the stop-motion style for textures and theatrical illumination. Taking references from Laika Studios, Wes Anderson, and Tim Burton. For this project, I focused mostly on using the hair particles and the volume shader for the smoke correctly. Also, to render this scene it was necessary to use the new CPU+GPU Rendering method in Blender Cycles to keep the time short. 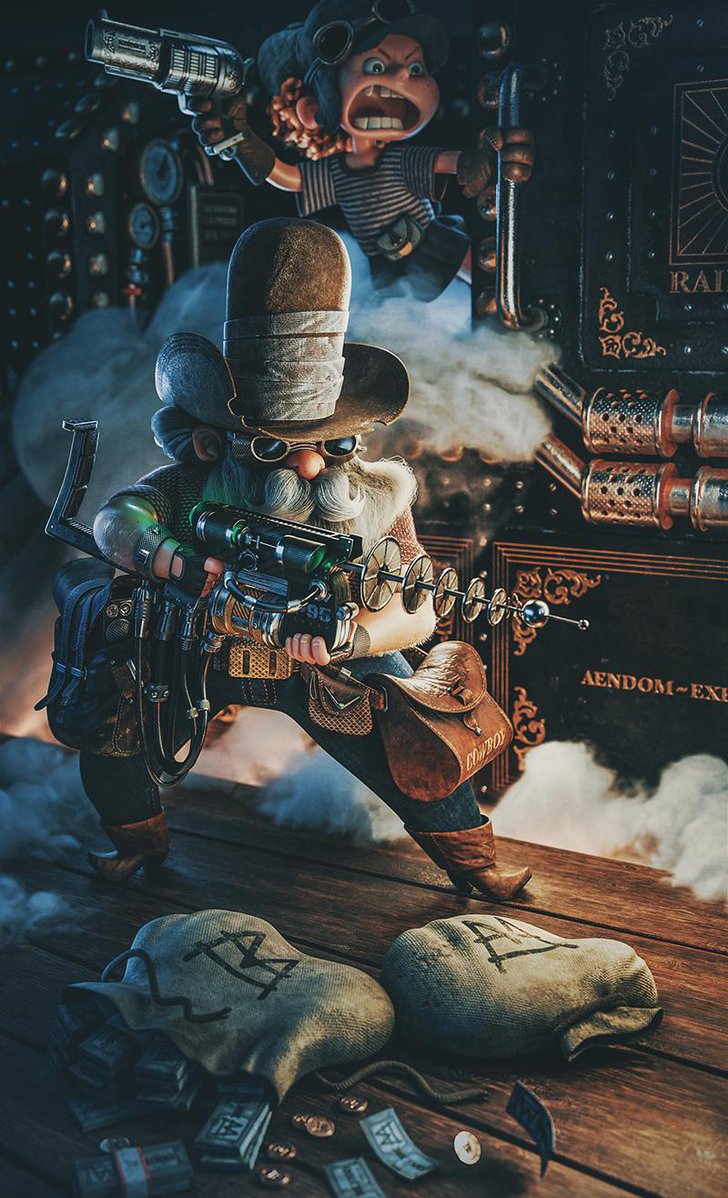 The complete scene of The Laser Cowboy

At this moment I focus solely on 3D, so I don't lose time making mediocre concept art, I search for a very well crafted image that tells a solid story. In this case, I found this concept in the book Sketching from the Imagination: Characters. I reached the concept artist and asked permission to use their art to make a 3D version of it. This will assure you to commit fully to the project and remove doubts in the process of making it. For the Laser Cowboy, I contacted Gaspard Sumeire, an incredible storyteller that works on animation and illustration. 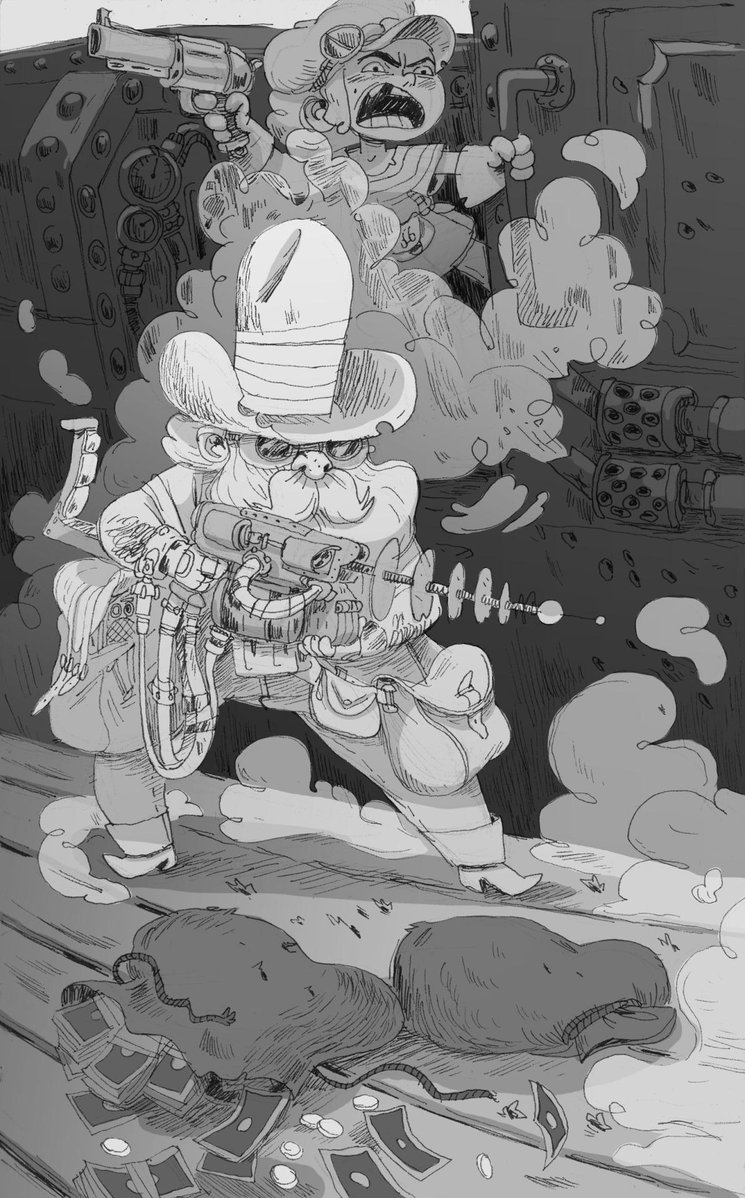 The process of how to block a scene

Sometimes it is necessary to combine polygonal modeling and sculpting. When the object is simple, polygonal modeling is enough. But for organic forms, first make a very basic sculpture, then do a retopology and use the Multiresolution modifier to sculpt the final details.  In the modeling phase these three modifiers are the ones I use the most; Solidify to give thickness to planes, Subdivision Surface to subdivide the model, or Multiresolution to subdivide but with the ability to add details in Sculpt Mode.

The process of how I block this scene

This is an important part in making organic shapes; a clean topology makes our work easier, uses less memory, and prepares the model to be animated. After sculpting the general shapes use the tool Grease Pencil and draw guides for making the topology easier to follow – with this the retopology will be more manageable. Finally, add the Multiresolution modifier and sculpt the last details. I used the add-on Mesh F2 which accelerated this stage quite a lot with the option to create Faces with the “F” key.

Take a high poly with the Multiresolution or Subdivision modifier with a high number of subdivisions, then make a copy downscaling it to 1 subdivision or maybe 2, then apply the modifier. This new one is the Low Poly. Mark the seams of the Low Poly with U > Mark Seams and hide them as best as possible. To Unwrap, first select all the faces in Edit Mode tapping A twice, and then Unwrap with U > Unwrap. There are two methods and I always try both to see which has the best result: Angle-based or Conformal. Pack everything with Pack Island. Finally, use the TexTools add-on to align and make some islands straight in the UV/Image Editor. 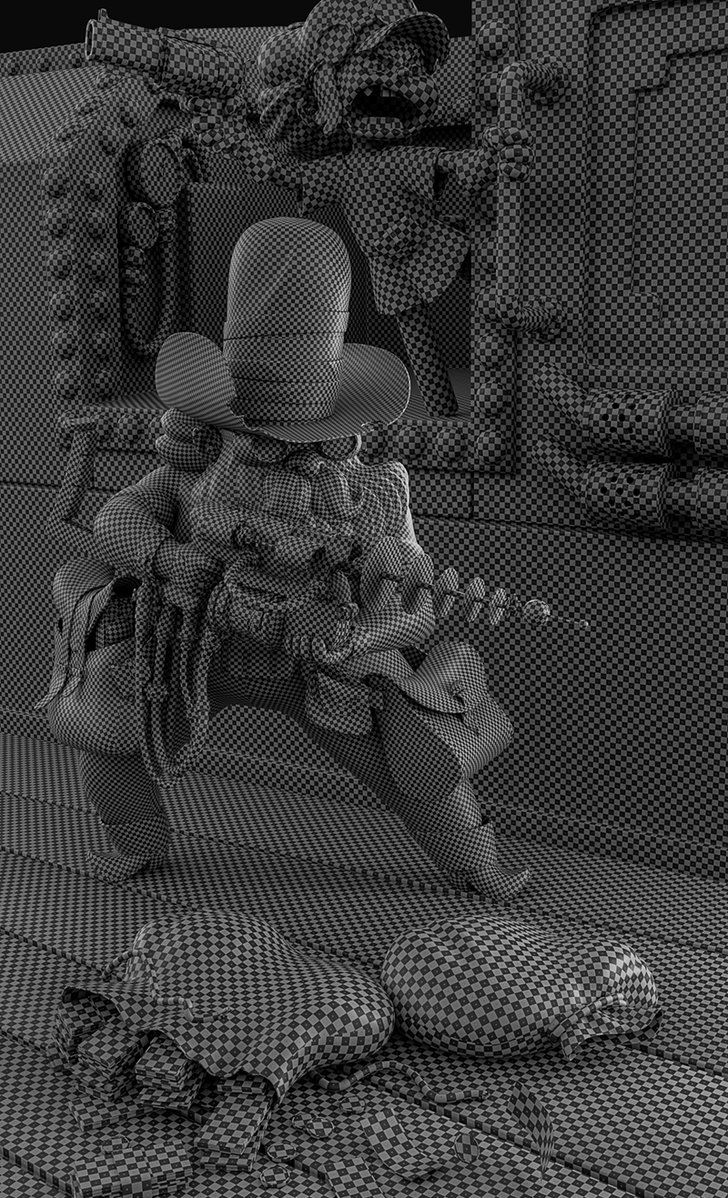 Texel Density divided into two categories, one with 2048px/mts and the other 4096px/mts

Having Color ID facilitates the selection of mesh areas in Substance Painter. To make them inside Blender, go to Vertex Paint Mode, create a series of colors then choose Face Selection and select the faces that will use the same material, and press Shift + K to apply the desired color to the selection. 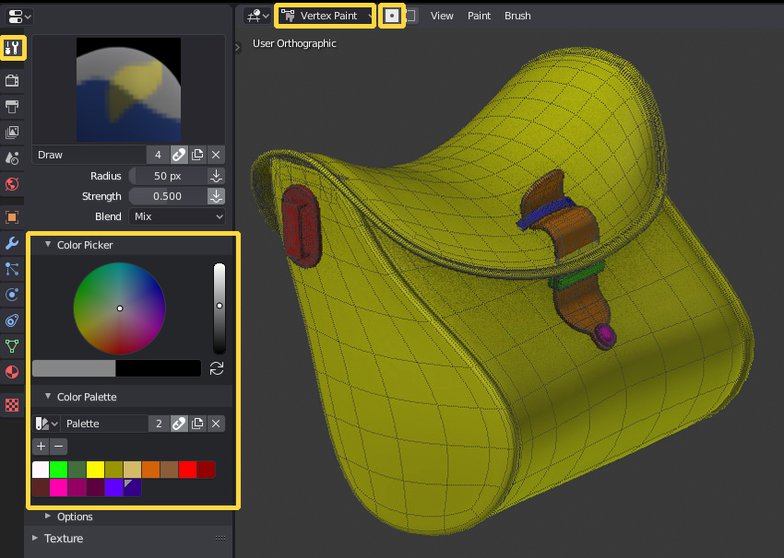 This selection will help to pick areas inside Substance Painter

The base structure of the simplest material consists of only three maps. Base Color, Roughness, and Height. These are the foundation of the most basic materials. With this fundamental combination, you can create all kinds of non-metallic materials, like cloth, leather, plastic, and much more. I use three levels of details for each type of map and group them into folders. General details for weathering. Small details for scratches, and Occlusion Details for color changes.

Progress with each additional map

Save time by adding all the output maps at the same time, with the add-on Node Wrangler activated. This add-on is a suite of tools to help make node editing in Blender easier and quicker. Node Wrangler is included in Blender by default, so you already have it, just need to turn it on. Use the Control+Shift+T shortcut and load the basic PBR maps. Select the BaseColor, Metalness, Roughness, and Normal Map maps – they connect automatically. Manually you have to add maps such as Ambient Occlusion, Emissive, or Scattering. 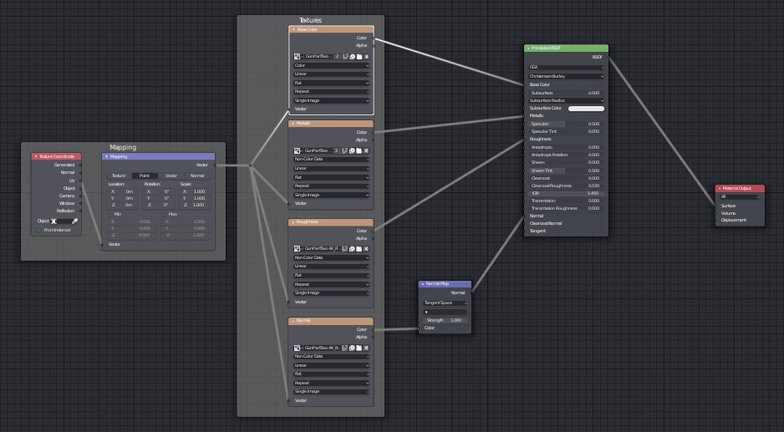 To generate hair we need three things; an Emitter where the hair comes out, the Particle System where we decide how it behaves, and the Material that defines how it looks. For this Workflow first choose the Emitter and add a Hair Material, then add a Hair Particle System, choosing the length and style of the hair. Finally, in the Particle Edit Mode design each hair one by one. Use the principled Volume BSD for handling the color of the hair.

The Emitter, the Particle System, and the Material

Smoke simulation is part of the fluid system, which is animated in voxels representing the density, heat, and velocity of the fluid. To do the simulation we need four elements. The domain where the area of the simulation is located, the smoke cannot leave this area. The Flow is the mesh where smoke, fire, or both are produced. The Material using the Principled Volume BSDF material is the PBR material for making smoke. And lastly, wind that generates a constant force in only one direction.

The domain, the flow, material, and wind

The goal of lighting is to explain the depth, shape and emotions in the best possible way. We can archive this with five types of lights: Key Light, Fill Light, Rim Light, Kick Light and Bounce Light. The Key Light and Fill Light are the most important and fall into the category of Master Lights, the others fall into the category of Shot Lights. Also, we must bear in mind that when we talk about color we have to think about temperature, whether warm or cold. 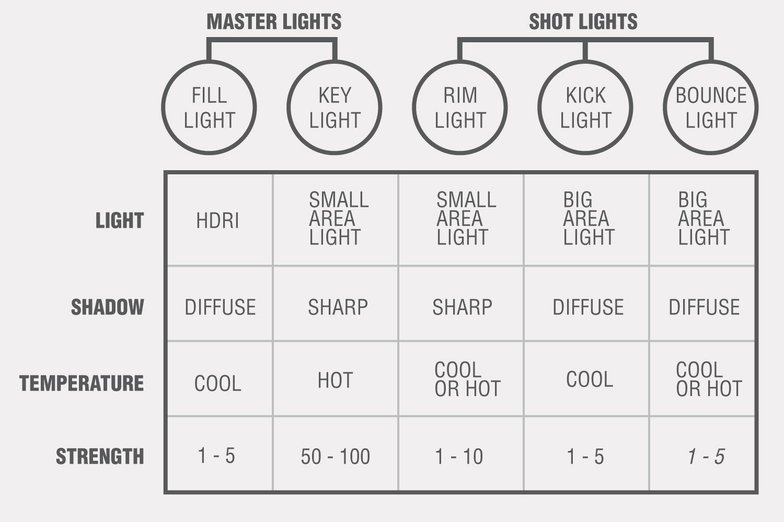 In this stage, I highlight the details with different methods and decide the general colors to generate an atmosphere inside Photoshop. I divide the post-production into three methods. Color Correction with Camera RAW: I seek to balance the colors, modifying the lights, shadows, and sharpness of the image. Color Grading using LUTs improving the visual tone of the image for aesthetic and narrative purposes. Lastly for emphasis I use Vignetting, Gradients, and Masks to focus on the most important parts of the image. 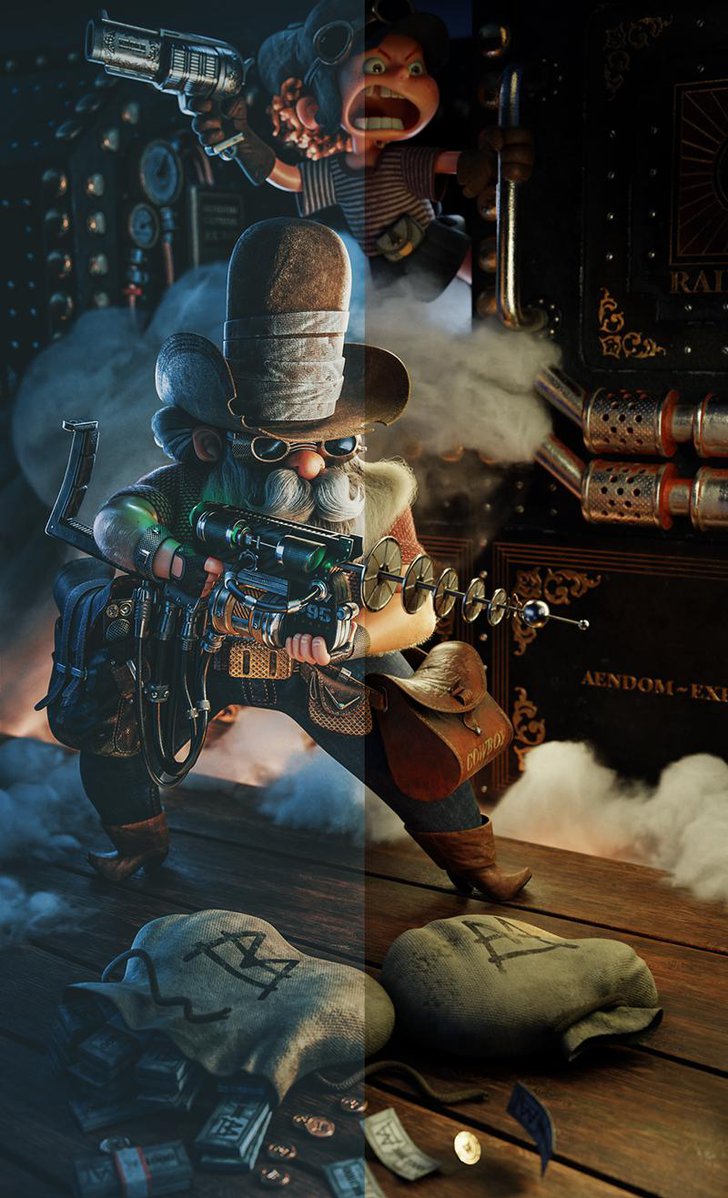 On the left with post-production and right without

The resolution of the texture is measured in Texel density. The goal is that all objects have the same Texel density, but sometimes it is not possible. In this project, I divided the Texel density into two categories, one with the general objects with a Texel density of 2048 px/mts and the main with the Cowboy that has double 4096 px/mts to be able to make close-up shot –, for this I used the add-on Texel Density Checker.