So now we’ve finished with the 3D part we have to acknowledge that we’re not on the home straight yet, we have half an image and it needs a ton of work to take it from a render into a digital illustration. Our biggest job is going to be to get rid of as much of the “3D look” as possible. As I mentioned in Part 1, I took some inspiration from Max Bedulenko who will model and render everything but then does a great job of painting out the 3D look. I purchased one of his PSDs from ArtStation and took a good look at how he achieves this. Essentially we have to try to paint out as many hard edges as we have time (or will power) for and use atmosphere/smoke/fog to further reduce details and repetition.

As I mature in my art game, I start to notice the things that make good art good. A couple of times it’s taken a bit of mentorship and maybe paint-overs to really see what a master artist is doing. Often we just look at a piece and think “Oh that skull thing is cool!” but what we don’t fully realize is that it’s not so much the skull that’s cool but how elegantly the image reads. And a decent read is often something that’s easy to read. So if you have a complex scene, you have to simplify it so the audience’s brains won’t fry trying to decipher what’s going on.

So in this image I’ve drawn out where I want the 3 main value groups to be. I want the foreground zombies and car to be seen as one group, the middle buildings to stand out as the next read, and finally everything behind it to be the third. This isn’t the same as defining the focal point. The character of Moe is going to be the focal point, but the 1, 2, 3 value-read is going to be how I organize it into a clean and tidy image that’s not a hundred random points of contrast. 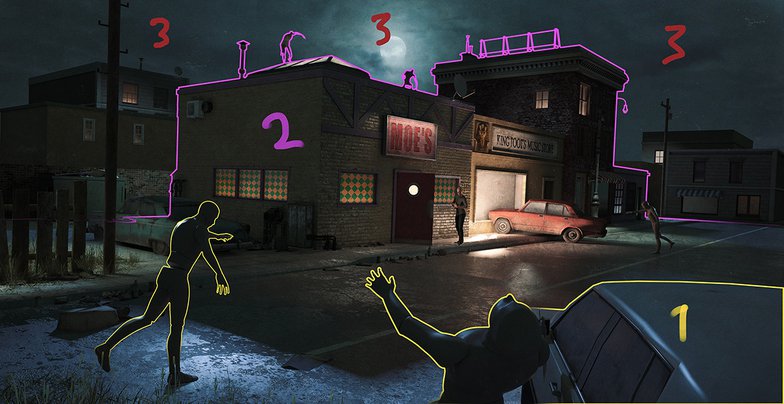 Try to keep the overall read to 2-3 large areas/layers, 4 at most

Step 2: The first step in removing the 3D look

Firstly I’m just itching to get away from how clean and crisp the raw render is. I start to apply some initial color correction to make the temperature a little more cool/unified, and I also take a leaf from Max Bedulenko and start layering in some gritty, fairly concrete-looking textures over the top.

If you look at the image you’ll see the layers I used for the noise and for the color correction. The screenshot of these layers is taken from further into the painting but gives you a rough idea of my method. 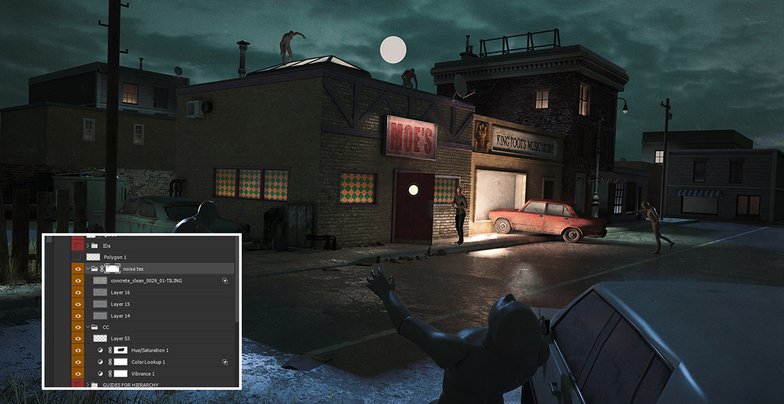 Getting rid of the cleanness of the render

Step 3: Adding atmosphere in Photoshop is way quicker than V-Ray

I’m definitely a fan of painting my atmosphere these days. In the previous Simpsons image I made, I rendered it with V-Ray Environment Fog on which look forever. Don’t forget, I’m not just rendering one image; I’m rendering it in layers. And even then, with the fog essentially baked into everything, I struggled to then regain control later in Photoshop as the sky was super bright, because it was basically illuminated fog.

So, using those render ID passes that I mentioned at the end of Part 1, I was able to separate out all the layers of the image so I could easily paint fog in broad strokes behind buildings to make them pop out. As a side note, I should mention that the first thing I did after rendering and opening all the layers in Photoshop was to cut out everything and place it on its own layer for this very reason. 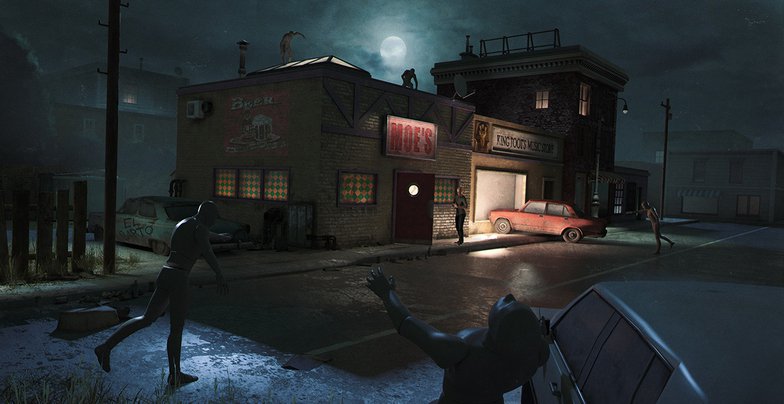 Save time with painting atmosphere

Step 4: Taking the atmosphere to the next level

Here I’m adding even more fog, not just in the background but to separate the foreground zombies from the mid-ground. It’s a useful tool for any concept artist or illustrator. Fog is used heavily by cinematographers and DPs in movies too. Even in an interior scene inside a castle for something like Game of Thrones, you can see they’ve piped in some artificial fog so the actors read well.

But the fog also makes things disappear, which is great for horror as it adds mystery and gives everything a dream-like quality. Notice how those far buildings are all but silhouettes? Did we spend a lot of time detailing those in 3D? Well, maybe, but do not get attached, we don’t need those details!

I knew when I was in the 3D phase that I was going to add some fire from the car crash so added lights in the scene where I would imagine the fire to be. I felt like it would provide some way to enhance Moe’s readability – either by silhouetting him, or by rim-lighting him, or both. Plus it really pulls our focus to his location.

In the process images you’ll see the initial stage without the fire, then in the next step I get some images of fire from Google and work them into the car/shop-window area. After that I change how the light would then affect the atmosphere around it by adding some opaque soft brushwork to that area. You’ll see on the right where the layers are that I’ve left off the cc or Color Correction layers, as well as the grain texture layers. Finally I show the image with all the layers on. This bright spot also acts as the only point in the picture that’s warm and with it being relatively small, it’s a comfortable ratio of dominant cool to secondary warm. If it was equal parts it would create unease in the viewer. 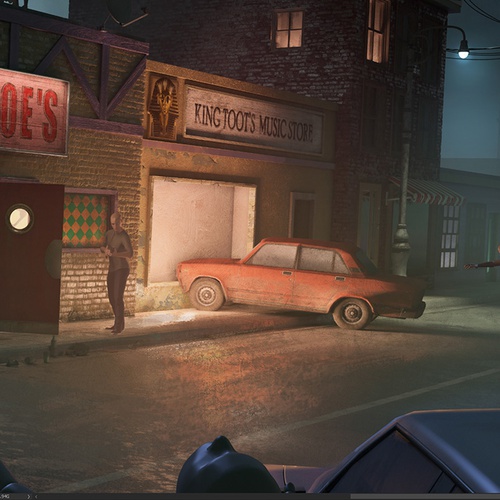 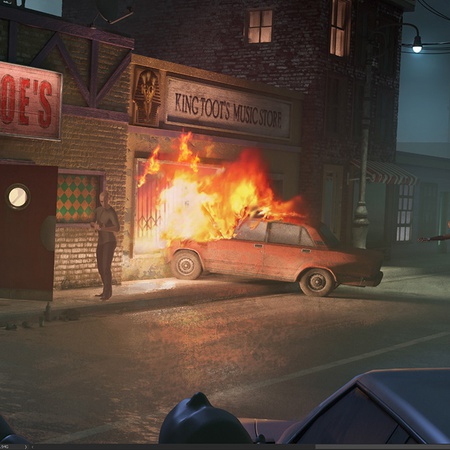 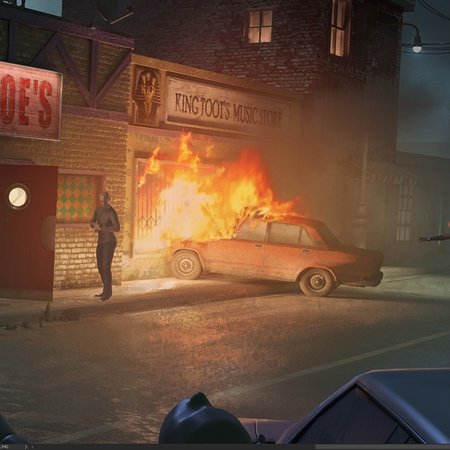 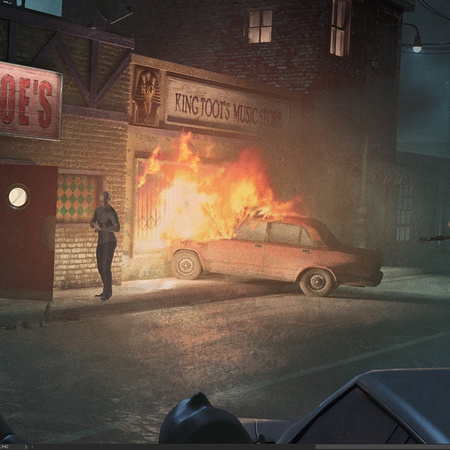 This is a good stage to bring up texture. So far I’ve added atmosphere and a few details, but I’ve also been adding texture-based details here and there. Some of this is with a paintbrush, going in and destroying edges (the hardest part of this was the little roofing brackets on the tall building and something like this is a dead giveaway that it’s a 3D model). Not that anyone these days would go in and hand draw every single one of those little brackets, but if you look at any photo of such things, they never look 100% crisp, even, and sharp-edged. I also paint in dirt here and there. I put in as much dirt and ambient occlusion into the render itself, but it’s never enough in a gritty urban scene.

Finally I add photo-textures. We’re all familiar with textures in Photoshop but what I want to emphasize is how I add photo textures today versus a year or two ago. I used to mainly add a photo, maybe try to match the contrast of the photo to the scene a bit, or maybe not, but I would use Overlay or Soft Light layer blend modes and maybe mask it in or out. These days I may still do that but I more than likely will use the “Blend if” layer style. Just double-click on the photo texture layer and look at the bottom right under “Blend if.” Adjust the sliders and have a play, but it’s essential that you hold ALT when you do this so the clipping/transparency appears smooth rather than abrupt. Holding ALT separates the two arrows to create a range of transparency rather than a sudden jagged change in transparency. 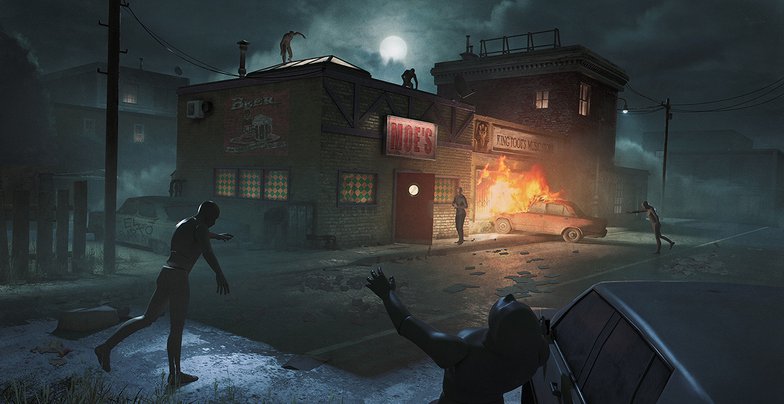 Getting some extra realism into the world

This is another example of adding photo-textures to a scene using a workflow I figured out. I notice that the car door area of the foreground car looks a little too simplistic and 3D. So for these little things you can find either a photo, or, if you struggle to find something in the right angle, look for a site that sells 3D models which are viewable in multiple angles and take a screen shot of that model with the intention of just grabbing a small piece of it.

In the images shown here I take the cut-out of the image and then use another technique of Photoshop’s Match Color. Here’s a tip for using that which I’ve shown in the screenshots. Match Color lets you take your layer and color-match it to another layer in any open document. The issue can be if you have 100 layers, all called “layer005,” “layer006,” and so on. if you have to do this a lot it can be useful to find a the layer you want to match to and make the layer name easy to find by adding a whole bunch of symbols to its layer name. Then, when matching to your current, layer-bloated file, you’ll spot it quite easily among the massive long list. I then add some smashed glass for that extra bit of detail. 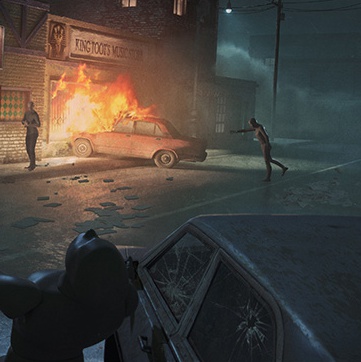 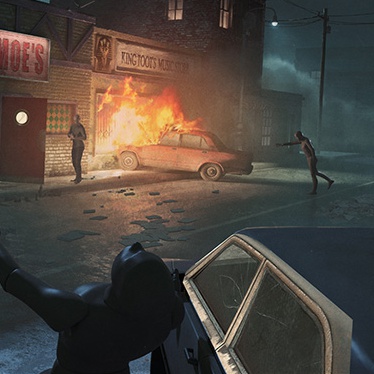 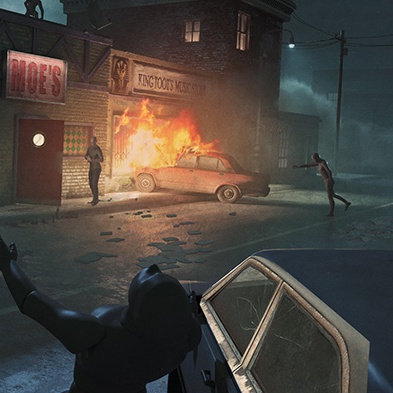 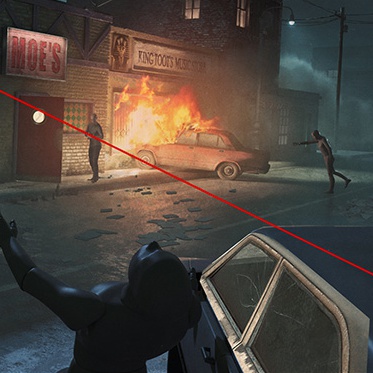 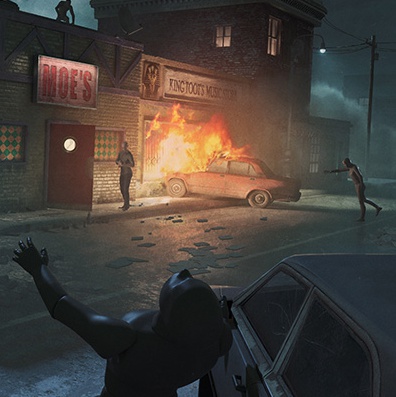 Similar to above, I scour the internet and my personal image library for anything that can be pasted over the base-poses of the characters to breathe life (or death as it were) into them. As you can see from the steps, I bring in something that’s roughly the same angle, lasso it, transform it into place, use the Puppet Warp tool where necessary, match color, and paint over the top.

It’s still important to make the zombies read, so a little rim light helps but also don’t give them much contrast within their silhouette so they don’t jar. Remember, the goal for the foreground zombies is for all of them, plus the car, to unify as one read. 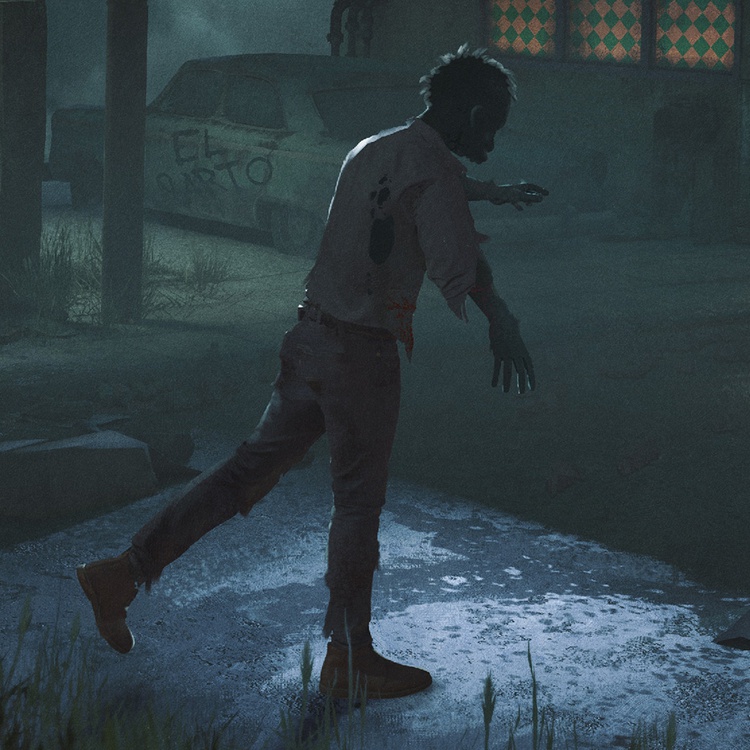 05 -  I use similar techniques from the previous step to work over the zombie mannequins to bring them to life. I mean death 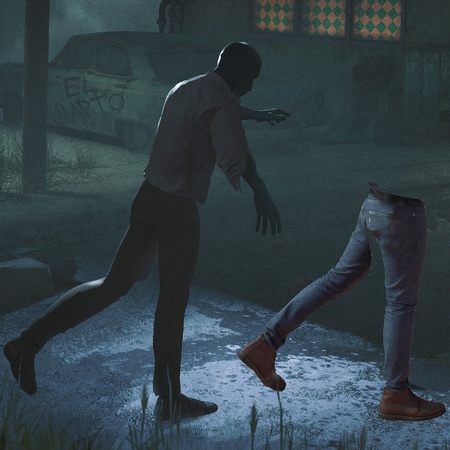 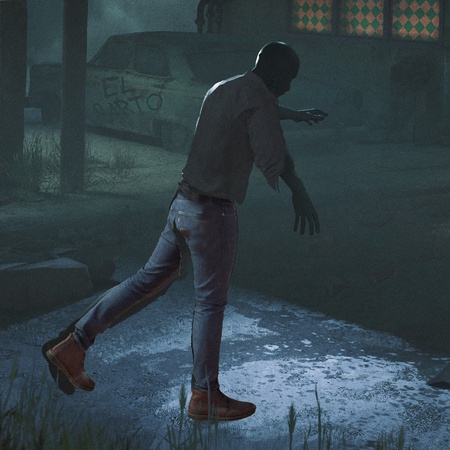 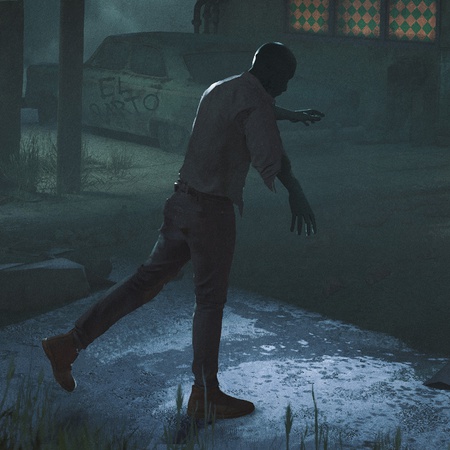 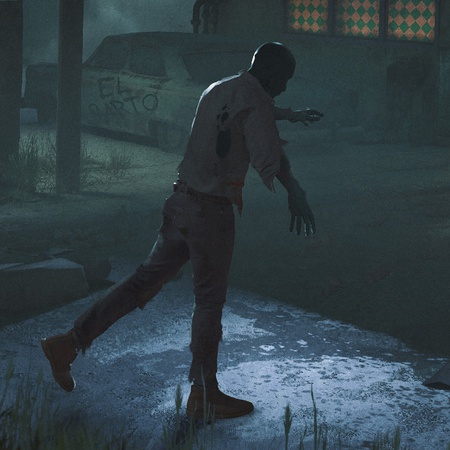 This was the hardest part. I’m not much of a character artist and posing is such a weak point for me! I spent a good hour posing the Daz model, and it was pretty useless I must say. I spent a long time trying to find reference of a guy holding a shotgun, nothing really sufficed.

I started with a reference of Moe that I found and then a 3D model of a shotgun which I could draw his pose around. Luckily I found reference of a guy in an apron who, from the waist down was posed exactly as I needed Moe to be posed (I also suck at doing feet)!

Once I drew him and lit him I had the hard job of making him work in the scene. He looked too colorful and saturated. So after a few experiments I realized that, to get him to read properly, he had to be in silhouette, but a rim light would make it so we still recognized our beloved Moe. It’s nice that he’s subtle and not too easily recognizable. 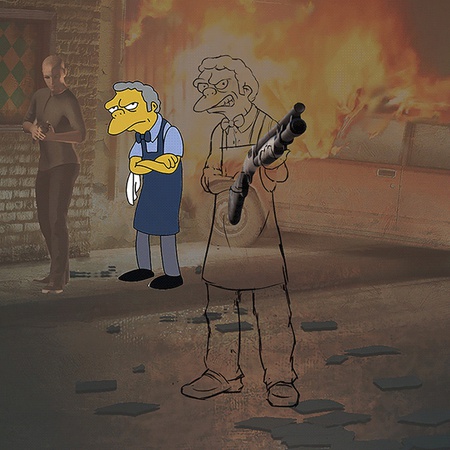 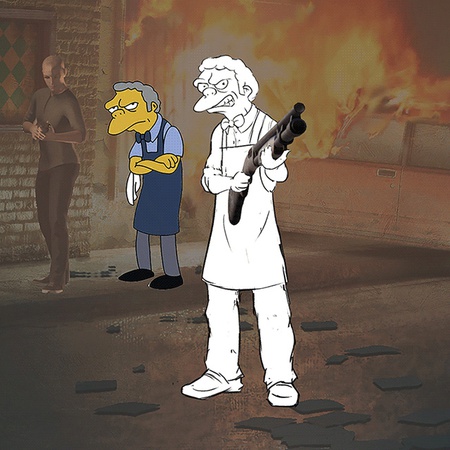 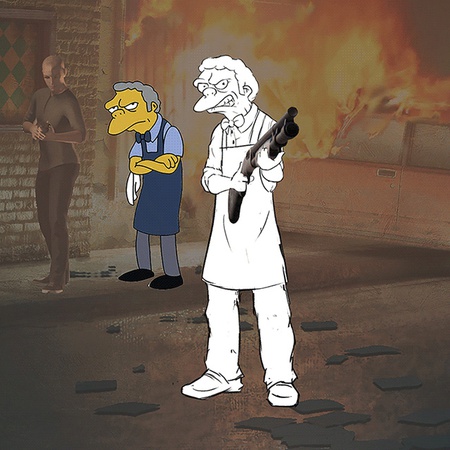 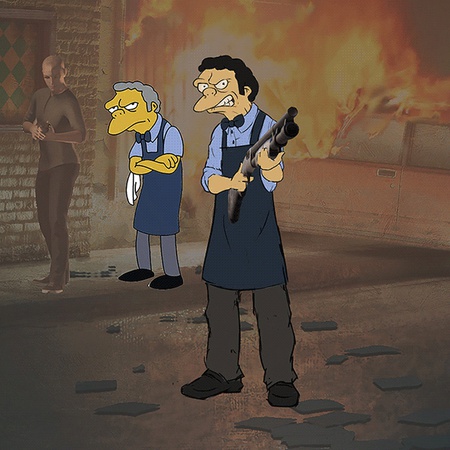 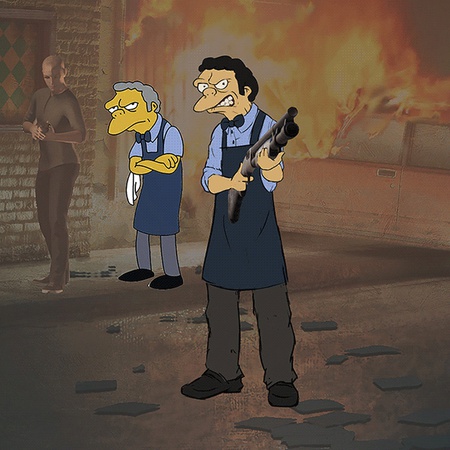 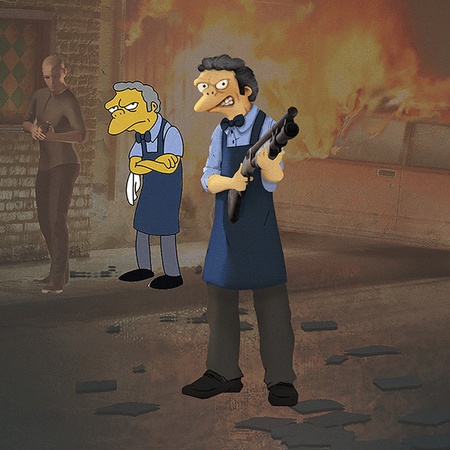 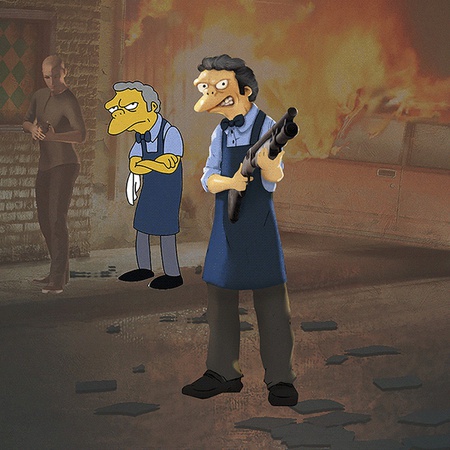 And that’s how I made my Simpsons Zombie Apocalypse painting! I hope you learned something from it and if you like this image then do check out my previous image featuring Apu defending the Kwik-e-Mart from zombies!