Andy Walsh takes us through the modeling and painting process for creating a chilly scene from “A Christmas Carol” using 3ds Max, Photoshop, V-Ray, and DAZ 3D. In part two, learn to block-in the scene and discover best practice methods for building up your asset library…

So here we are in the 3D phase of the painting. I wanted to make this part as generic as possible in terms of software and techniques so that you can use whatever software you like. I also want to keep emphasizing that there is some benefit to taking the time to build assets in 3D for later use. If you do this enough you’ll have quite a few bits and pieces that can be used for years to come, and I do just that in these steps. That said, I will be using a kind of LOD (level of detail) approach whereby I’m applying lots of detail up front and less as we go further away from the camera.

I knew I wanted Scrooge’s counting house up front, with steps going up to it. For some reason I wanted those steps in front, perhaps as though the offices where he worked all these years were once lofty respectable establishments and not just at street-level. I also knew that I wanted him and that building to come forward and read well, so whatever building was next along would have to be recessed to allow for atmosphere and fog to create strong separation.

We can’t tell that here as the fog hasn’t been added yet. The windows were downloaded as a free asset from 3dtotal, and you’ll want to try grabbing as many free/affordable assets as you can to save time, and add to your asset library. Speaking of which, the snow was lifted from a Christmas scene I made last year! The snow was just a plane that had a noise displacement on it.

Getting the initial angle and block in

As soon as I switched on the environment fog I knew that my planning had paid off as our foreground stood out from the mid-ground really well. I made a slight camera adjustment to comfortably fit in the hanging sign, and again, going back to the asset re-use, I added railings, a carriage, a Victorian lamp, and the distant domed building, all from previous projects. So note that the far building is badly detailed, but who can tell? Not me! So even if you had to make that, some simple shapes would suffice given the thickness of the atmosphere.

The Assassin’s Creed reference came in handy when putting the details into the face of the building, and adding just a hint of an out-of-frame light source helped to make the forms read without drawing too much attention. The making of the door is a technique I’ve used a few times in spots like these. I took an image from Textures.com of an old door, took a screenshot of the aspect ratio of Scrooge’s front door, stretched it to match, then gave it some extra details in Photoshop (the knocker and the handle) before placing it as a texture on the door plane (just a flat plane).

I then cut into the door and extruded parts to match the door’s approximate three-dimensionality. It doesn’t have to be one-hundred-percent accurate. The knocker was just some tessellated polygons that I bulged out so it was rounded rather than flat. No need to sculpt it at all. From a slight distance it looks convincing. And if you were pushed for time, I think a flat plane might suffice. 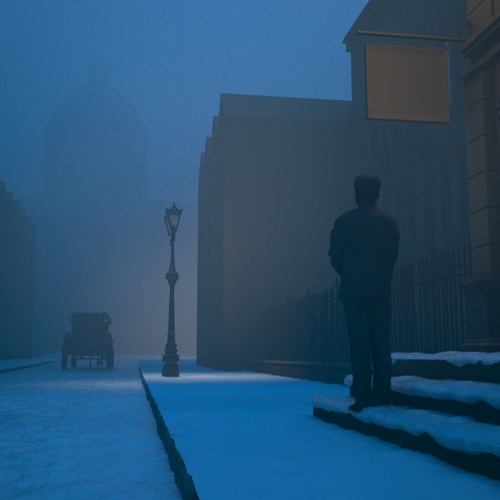 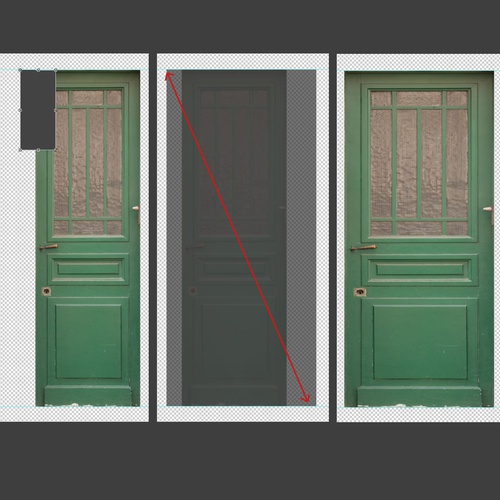 Going back to the Assassin’s Creed reference, I went about making this larger building, which kind of looks like a bank or a big art gallery. It’s pretty simple and in fact could have been simpler. I downloaded these ornate high-poly column/pillars that you can’t even see. And likewise I made somewhat ornate pillar bases. But as I keep saying. I’m sure these can be used again some time!

Speaking of (again) the chimneys were re-used models from some other project I worked on. Some of these components (such as the chimneys) could even be done in the 2D paint-over phase as they’re so flat. Finally, material-wise, I made it so many of the buildings in the scene had multiple levels of ambient occlusion so that every corner was dark. I believe this was quite essential to creating the look and feel of old buildings in that era. 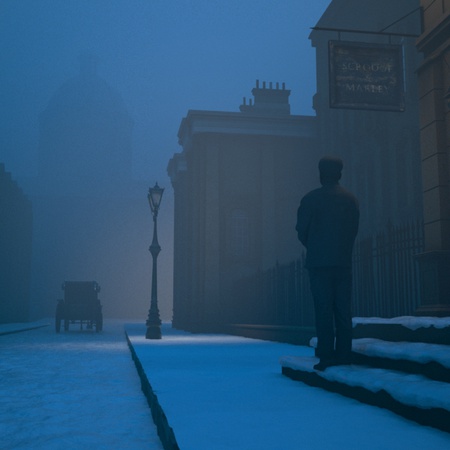 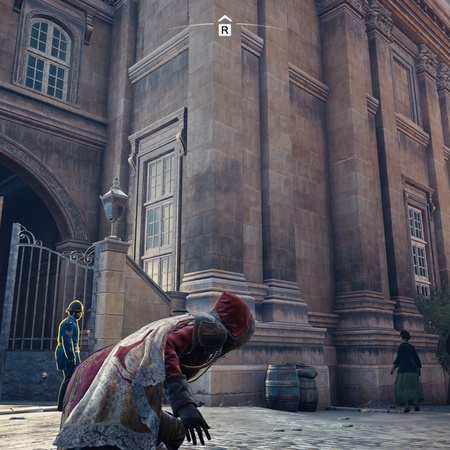 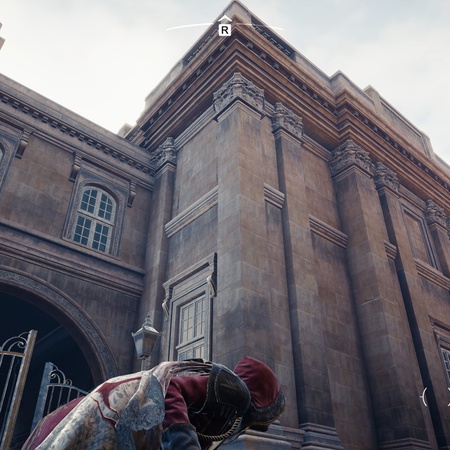 Striking a balance between too much and too little detail

Often when I’m working in 3D I’ll need to see what the image might look like with a touch of Photoshop added over the top. The render is a very basic starting point, even if you’re not going to do much paint-work, it’s still very raw and can mislead you into thinking that you’re looking at an image that resembles the final piece, when in reality there’s a whole bunch of tweaks ahead. I knew I wanted the hue to be green-ish or a kind of teal, so I adjusted that and I added some snow, plus a little glow for the lamp.

At this stage I could start to actually see the light at the end of the tunnel, which brings a little comfort compared to the earlier stages where you’re never too sure it’s going to work out. Now I have a PSD with some adjustments on I can just routinely drop new test renders in and I get all these new changes for free because they’re just adjustment layers sitting on top of the render output. 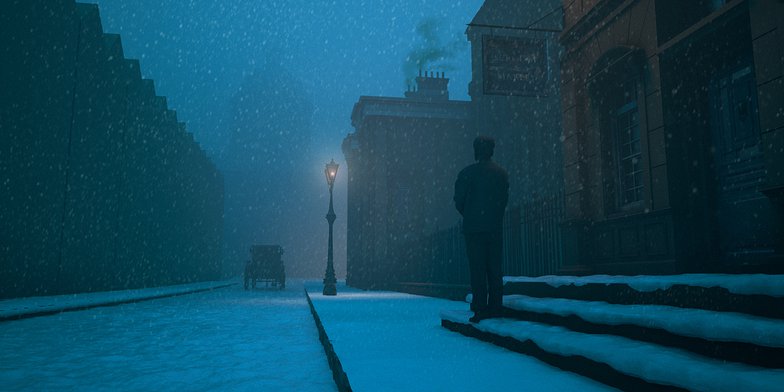 Now that the right-side of the street was pretty much done, I turned my attention to the left-side, which was always going to be pretty straightforward (hence why I saved it for last). The first building was – you guessed it – an old asset from a previous project. You getting the message now? The second building was pretty fun to make because, at least shop-level wise, it was based on a building I once visited in a very cool place in England called Blists Hill, which is a town that is like a Victorian museum, but on the scale of a town. Crazy. In this photo it was Christmas time and so was even more consistent with this theme. As for the top of the building, I used an old window asset that I updated to have more small window panes (common for the era) and then just duplicated it. Not too difficult. Using this method you can quickly create building faces. 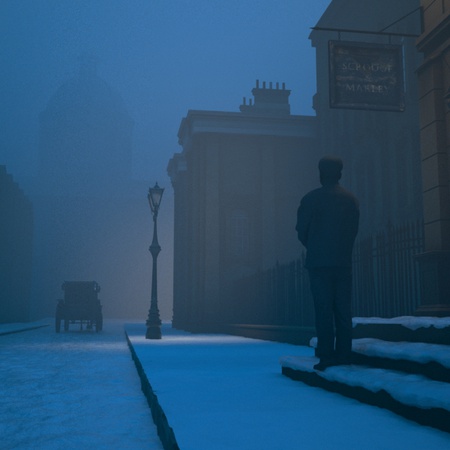 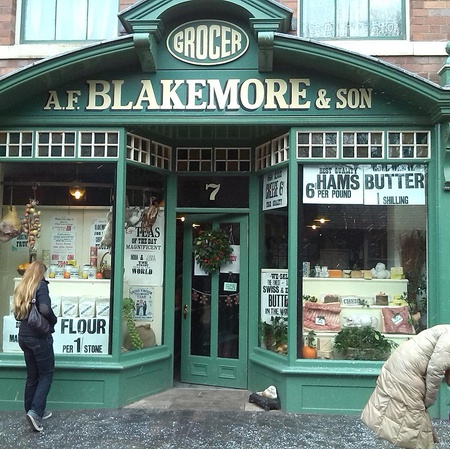 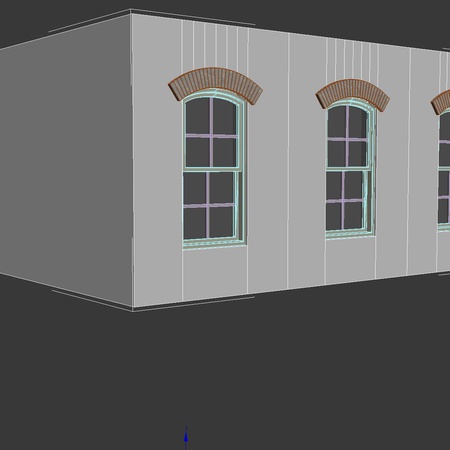 Going back to the Assassin’s Creed ref again, I really liked how 3D the buildings looked when viewed at a sharp angle. There’s lots of pillars and windows and hardly any rest areas, it’s all busy and yet just uniform enough to not get noisy. It’s worth noting that the LOD approach I’m using is such that making a full building wasn’t necessary here, but I fancied making something that could be used again in future work. That said, it’s still not good enough to be seen up close. Let’s get into the making of that building in the next step. 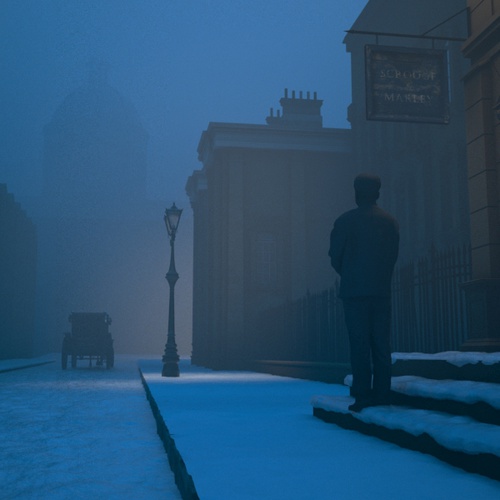 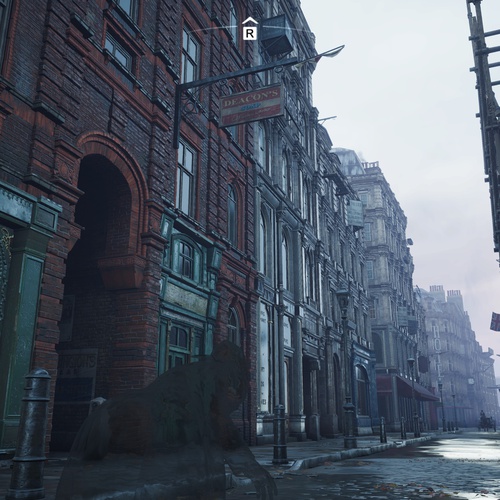 So this 3D model is slightly over-modeled but given that a lot of it is duplicated, it doesn’t matter too much. It’s pretty much one pillar, box modeled, a re-use of Scrooge’s window, a re-use of the other arched window (with added panes) and a few lofts/extrusion/sweeps, whatever it’s called in your software. If you look at the screenshot with the Sweep Profile window, that’s a free script for 3ds Max, which has pre-made sweep profiles which you can then apply to a line, and you get these nicely detailed Victorian moldings.

It’s a great way to quickly add dense details to period architecture. Again, this building doesn’t look too realistic up-close so always model what your camera sees yet allow for some flexibility because if the asset just about holds up at different angles, the time you invested in making it can go to great use in future projects, as demonstrated several times here! In the next chapter I’ll be taking our render and painting over it in Photoshop, as well as making a character-base in Daz Studio. 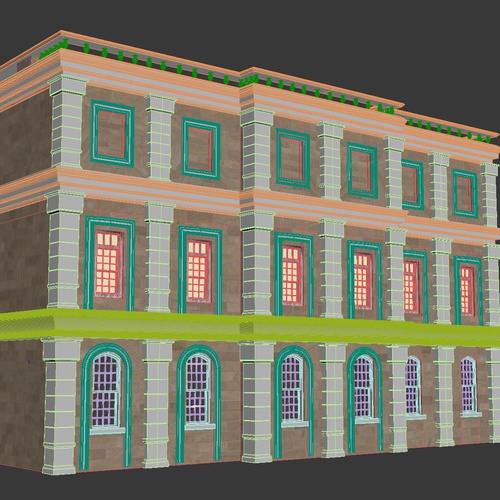 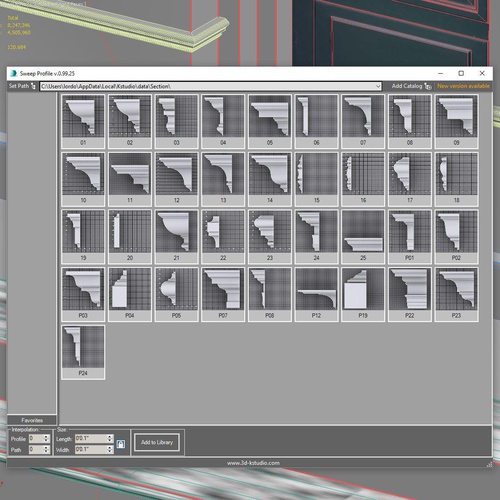