Model an astronaut in Blender

Zoltan Miklosi takes us through the Blender, ZBrush, and Photoshop workflow behind his Derek Stenning-inspired artwork “The Astronaut”

Hi there! In this short article I will explain how I created the image “The Astronaut,” which is a tribute to Derek Stenning’s awesome Entartete Kunst work, and at same time I hope I can give you some useful tips and tricks, and a bit of inspiration too.

The inspiration can come from anywhere. There are cases when the idea comes from a place which is not related to the planned image directly. In this case, the base idea came from Derek Stenning’s “Entartete Kunst” work mainly. Besides that, vintage sci-fi comic books, book covers, spacesuit images, and movies that I found on the net, were the resources of my image plan. I like to get ideas from different places. For me, the most important thing is that my images contain something unusua 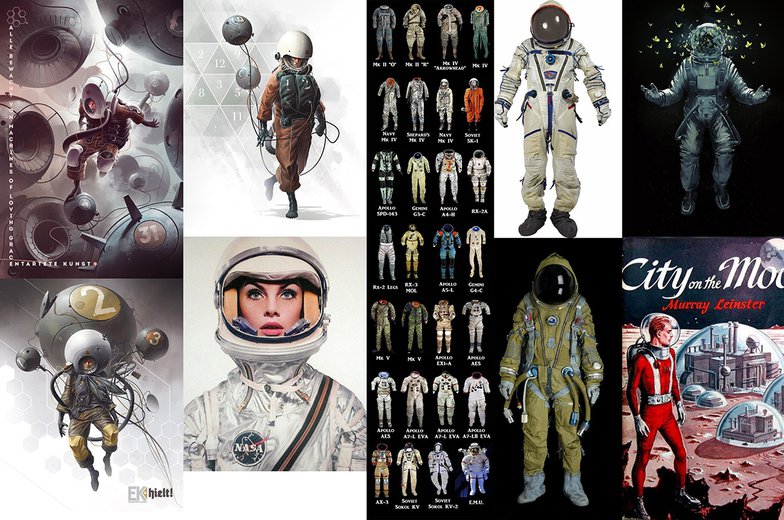 The inspiration can come from anywhere. In this case it came from Derek Stenning's "Entartete Kunst"

Creating the base human and the spacesuit

The base mesh of the astronaut is from one of my earlier projects called Hulk. I created the huge muscle man in the traditional way. I had two reference photos; one was for the front view the other one was for the side view. Importantly, the reference photos must be flat, and must have been captured with a long focus length if it is a real photo. The fisheye effect must be avoided!
The reference photos were a thin male model – in this case downloaded from the internet.

I made the skinny male model muscular. Hands, feet, ears, head, and eyeballs were modeled separately, and after they had been finished I attached them to one object after I modeled half of the human body. I duplicated this half mirrored it into one object. The next step was to mark the seam lines and unwrap the human base mesh for the skin texture and the eye texture.

I separated the materials along the seam lines. I used different materials for the skin, eyeballs, and cornea. After that I rigged the unwrapped human mesh and I set a vertex group for the mask modifier. Body parts covered with spacesuits were masked out only so I avoided the crossing of the two different objects, human and spacesuit objects. Another great skill for Blender is the shape key setting. If an object is not rigged properly you can fix it with shape keys. Sometimes a vertex point crosses its object or another object. In that case you can set that point properly by using shape keys option in Blender, or you can also use this option for facial expression. 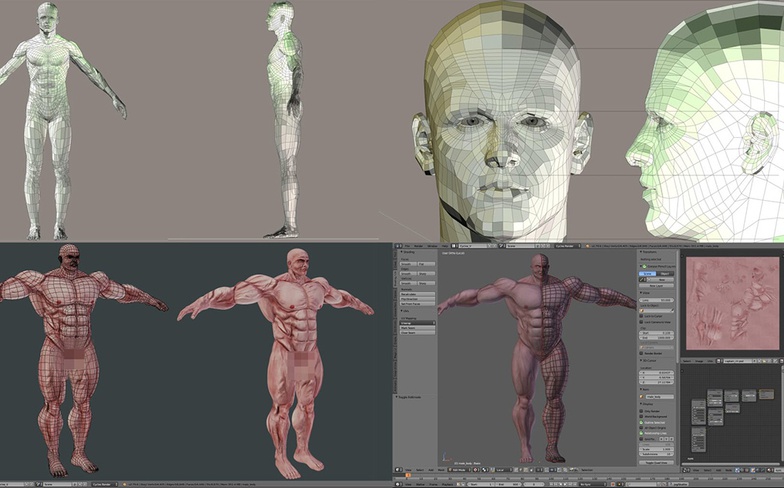 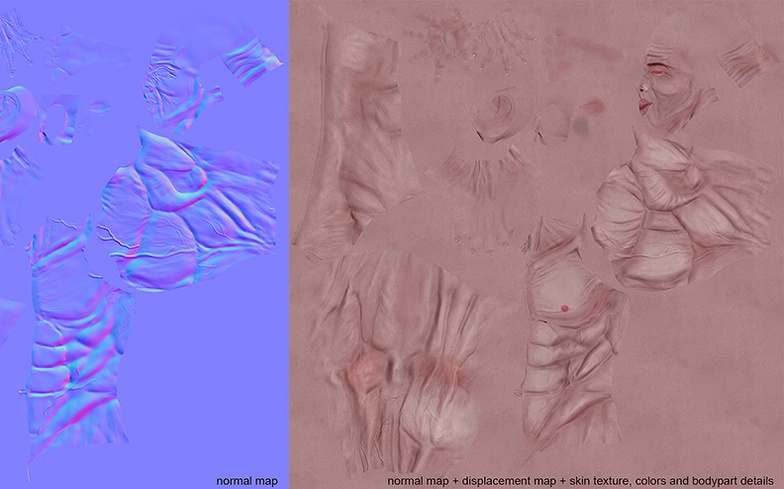 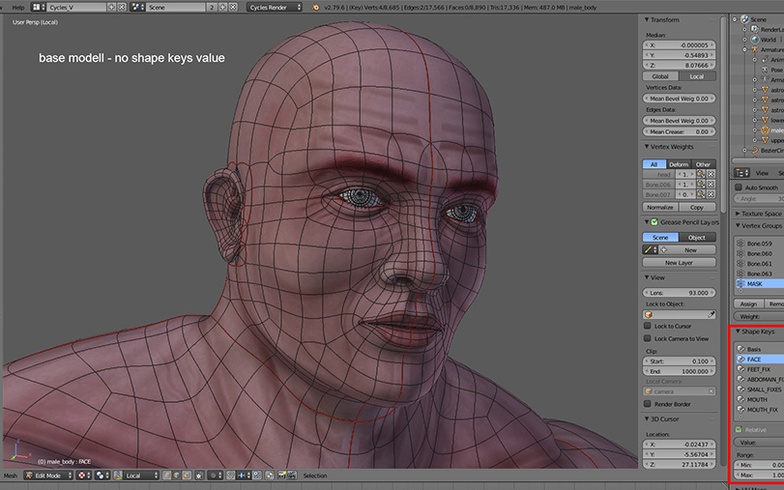 The next step is to create the spacesuit. If we have a full human mesh we only have to build up the spacesuit object around the human object. As I did, at the human base object, the spacesuit was done in the similar way. I have modeled only half of the spacesuit and I duplicated and mirrored one of them to the other side, then I attached them into one object. During the modeling process I mark the seam lines as I did. I used 11 materials for the spacesuit in this case; this number contains different suit labels and logos. Some of the textures are from textures.com and a 3dtotal textures CD without any modification in Photoshop. 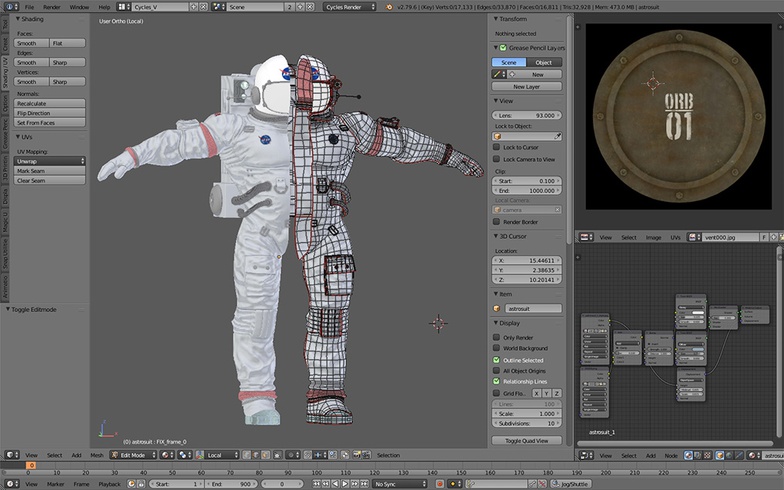 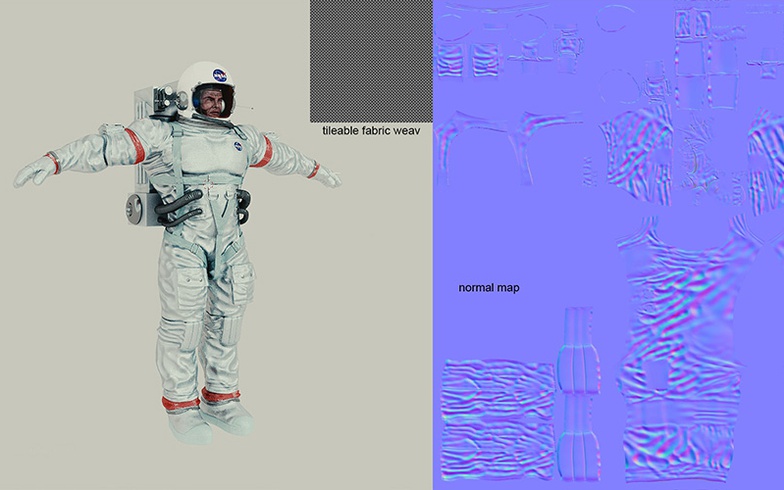 This is a great skill in Blender. Usually I set the editor window to render view, so I can see the rendered version of the image in the editor view in real time! In this mode I can set the materials and lights properly and immediately. You see the result in real time. For the Astronaut image I used mixed toon shaders with realistic textures. One of the toon shaders was set to glossy, and the other one was set to diffuse, and its value (diffuse toon shader) higher than the value of the glossy toon shader.

For the spacesuit I also added a displacement vector with displacement texture. The cloth of the astronaut contains 11 materials and most of them are two mixed toon shaders: glossy and diffuse. A tileable texture gave a bit of roughness to the spacesuit. There is a large displacement texture in 4K size with a small 512*512 px size tileable fabric texture which is repeated along the x axis 40 and along the y axis 40. I wanted the whole image to be “cartoonish” with realistic effects; I think of light halos and the mist. 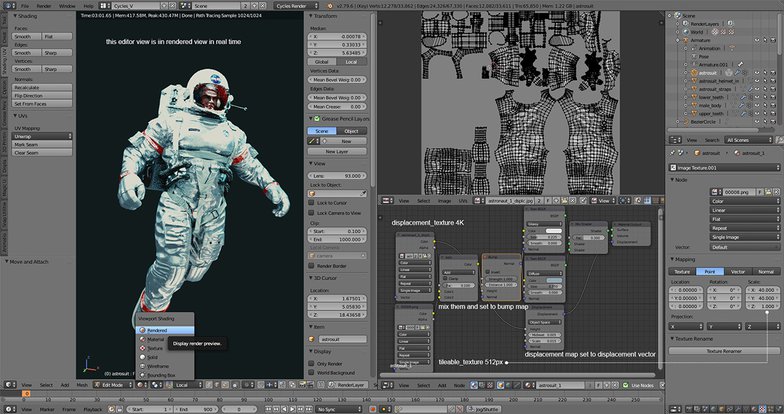 This is a great skill in Blender's Cycle engine. I can set the materials in render view mode in the editor window in real time

Setting the camera and lights

In real-time rendered editor view mode this step is child’s play. I used six light sources for this image besides the material and environment light emissions. Light sources give ambience to an image and make the details visible, so I think this the most important part of creating an image.

The other important thing is to present the scene in an exciting, interesting way. If an image aspect is too flat you can cause a bit of dullness. Exciting and interesting images have a bit of a concave effect; the distances become extended and prolonged. Small value focus length makes the objects near to the viewpoint huge, and for the objects further away, the points of view are much smaller and this effect makes the image interesting and exciting. This camera effect must be used carefully, but it is worth playing with. The sensor option works in a similar way to the focus length. We can enhance the excitement of an image by playing with the composition and setting the action away from the centre. If we place the astronaut a bit to the side, we can get an interesting and exciting image. 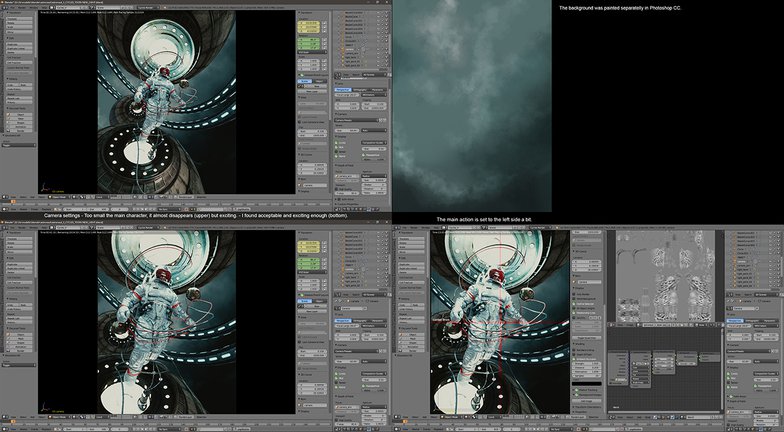 Creating the background and its objects

After I set the lights and camera properly, I dealt with the background. The nebula fog was painted in Photoshop; the orbs were created from sphere objects and unwrapped with cylindrical projection and front view projection, according to the precreated texture. I got their textures from a 3dtotal texture CD and texture.com. I put the textured and materialized orbs to the left side of the camera view, mainly so I could enhance the excitement of the scene. The background image was to join to the world background option. 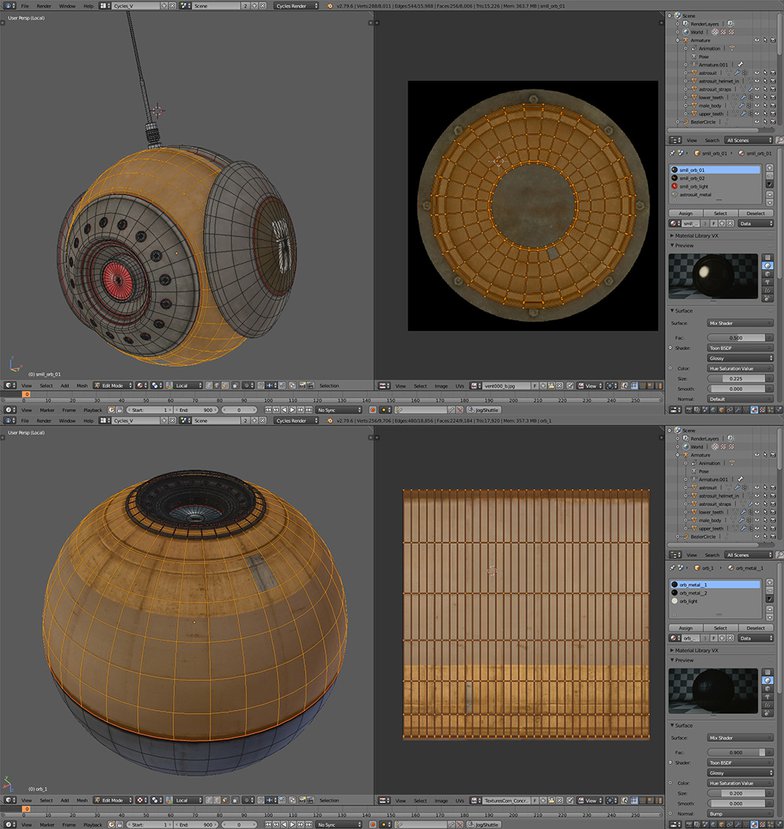 Orbs were made from sphere objects and textured with 3dtotal texture

Finalizing the image, I used the composition setting node system in Blender that the image below shows. For this Astronaut image, I had to render a mist image, an emission image, a Zdepth image, and a composition image. The emission map was blurred and joined to the rendered composite image via the mix node which was set to add. The mist map received a slight color and joined to the composite map. Sunbeam and defocus effects were used to make the final image shiny. As you can see, the enclosed image enhanced the atmosphere of the image with gradient effects (colorramp). It gives a bit of mysticism to the image.

That’s about all I can tell you about how I completed the image for The Astronaut. I hope I gave you some useful tips to show you how good Blender is. I would like to say thank you to Ton Roosendaal and to all the Blender creators! 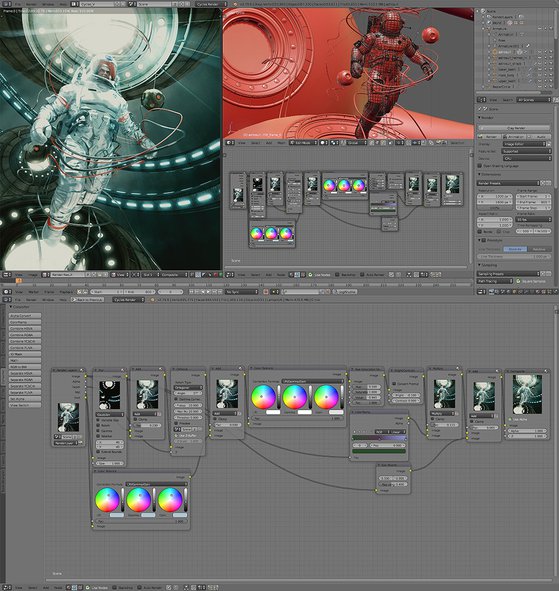 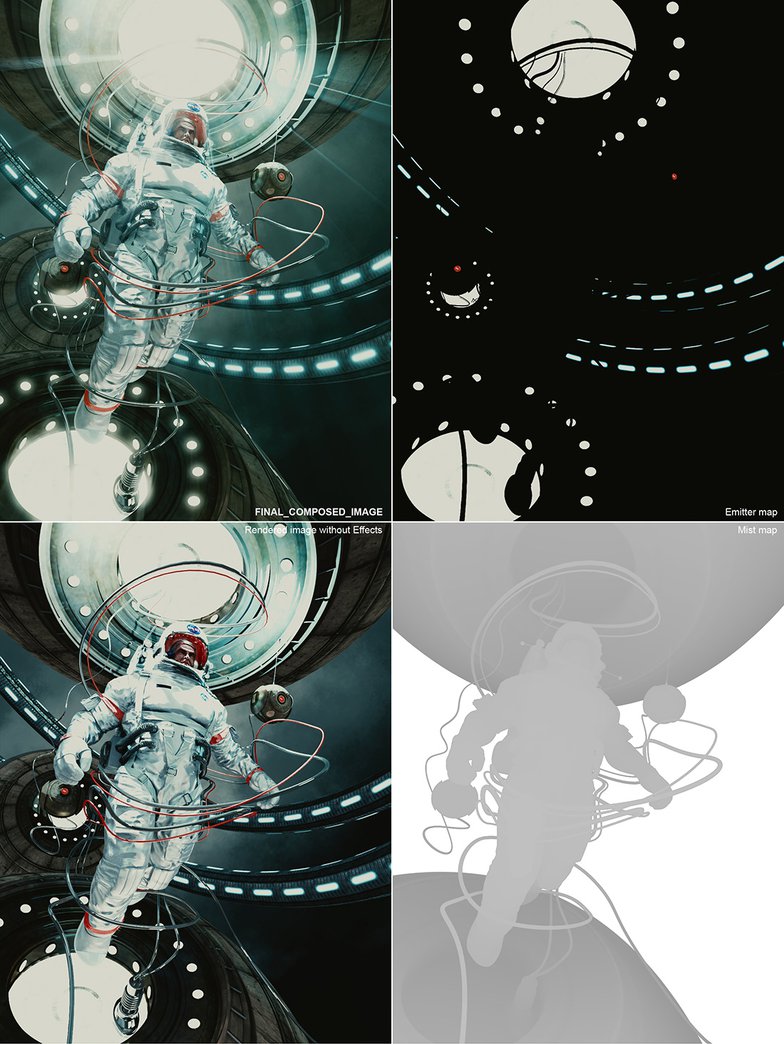 With Blender composition skills anybody can create awesome images and movies