3D character artist Akshay Jain shares the process behind the creation of his Batman turntable, featuring a ‘Mount Rushmore’ of Batman’s baddest villains, created with ZBrush, Maya, and Photoshop…

In this tutorial I will share my thoughts on how to bring a character to life by taking inspiration from one of my favorite artists, Jim Lee, and molding it with my imagination to find how I want to present those characters in my artwork. We will cover topics like collecting references, using imagination, blocking the imagination, pre-production, production, and post-production.

It all started with a very rough thought I had in my mind which you can see in my final output as a finished product. My thought was like showing Batman in dominance and overcoming his villains, and at the same time a more thoughtful and philosophical piece. I imagined Batman sitting over a rock piece in dominance with a villain’s head coming out of that rock piece, and telling a story through that.

I shortlisted the main batman characters like Joker, Cobblepot, Two Face, Bane, Riddler, Ras Al Ghul, Harley Quinn, and Catwoman. So I began with collecting references of Jim Lee sketches of DC villains and Batman to lay the foundation of my rough imagination. I collected references for the feel of the rock base like "Mount Rushmore" and batcave sketches to get a feel for the right direction.

Right after collecting references I sort them into different groups using Pureref. It is easy to use and an artist favorite. Since most of my idea was in my head I started working on it step by step, starting from the base by adjusting 8 faces on a long rock piece with very low res using base meshes. While exploring the base, which is still in initial stages, I decided to give a break between the rock base and batman by adding a metal platform, inspired by his batcave designs. After blocking the base I started working on my Batman character in A-pose. Since the Batman suit doesn’t have many elements to it, the main focus was on anatomy. 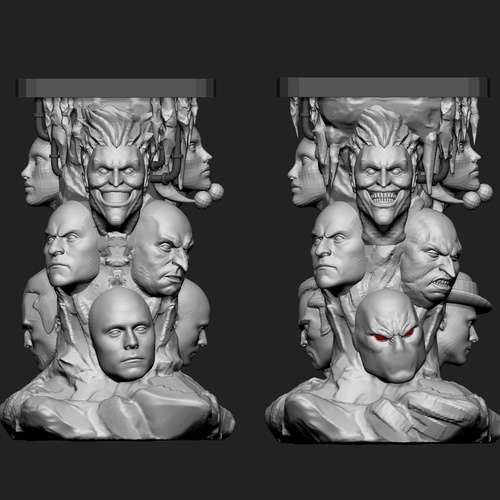 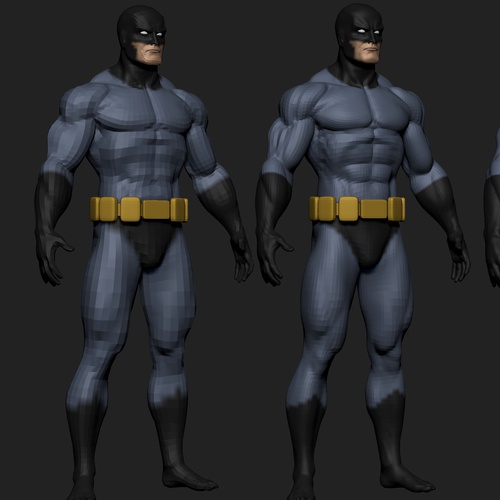 Bringing the whole piece together

So in this section I show my Batman in the very early stages because I knew I had to sculpt him asymmetrical, and I separated the head early on, because that will be a swap. It’s all up to you guys which planning saves you the most time. I try to change my workflow every time which helps me in learning my mistakes and keep me growing as an artist. After a quick pose according to my ref, I assembled my whole file in one piece with the base under the Batman.

I started giving attention to each and every part separately to add more into every piece. I started from the top, figuring out the right anatomy, and a more refined posture for Batman; adding weight to the character, right attitude. You have to observe closely how weight gives impression to muscles. Find images for your pose and study it and apply it in your model. Just don’t settle for the satisfactory.

Next came the metal floor base. I wanted to give it a feel that it’s a part of his sci-fi cave lab where Batman works, and cave rocks under it showing his villains. I studied my references and gave the metal piece a very quick rough feel while keeping it small and under Batman’s feet. The silhouette is the main key to keep your character interesting from every angle.

Now before this step you have finished your 80% of the work if you are following the right process. It took me around 1 week give or take to get the right feel for the character, without focusing on details and smaller refining. Refining the whole piece means shaping your idea and imagination that you had in mind in 3D more clearly, so that you can lock things in starting from here.

I refined the anatomy more in this area and started working closely on each of the 8 faces of the villains, staying true to the artwork and anatomy and my aesthetics. Refining medium forms for the rock base. Double checking the silhouette from every angle. Unwrapping every SubTool or remeshing the SubTools for adding details in the next step. I simultaneously added more shapes and breaks in the metal floor. 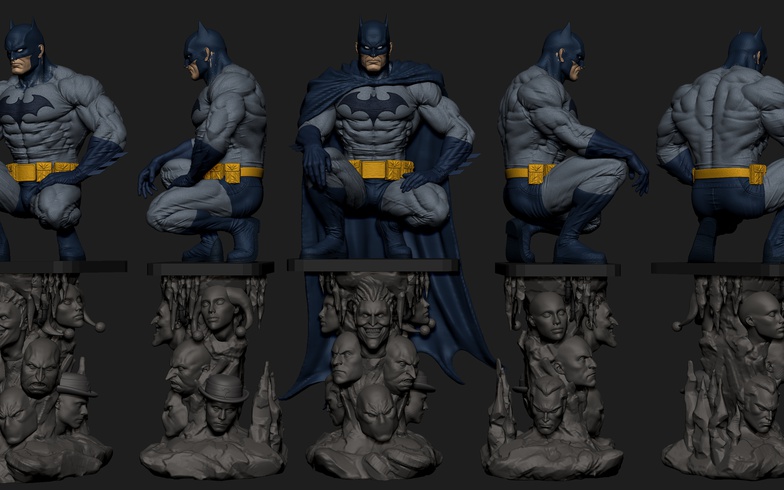 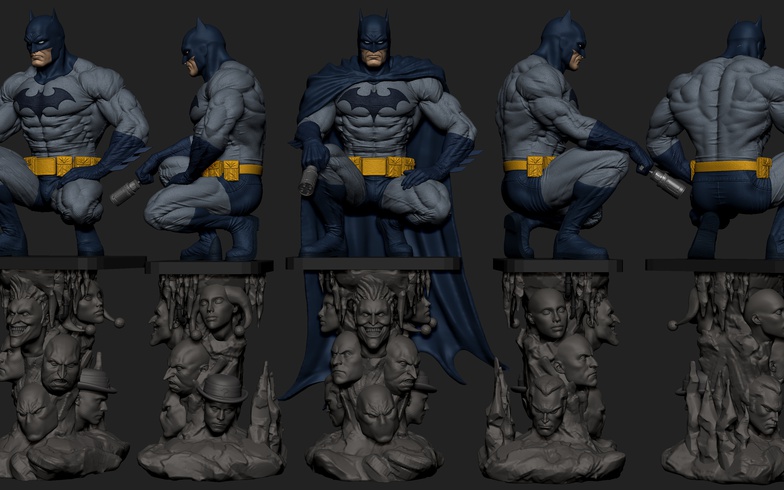 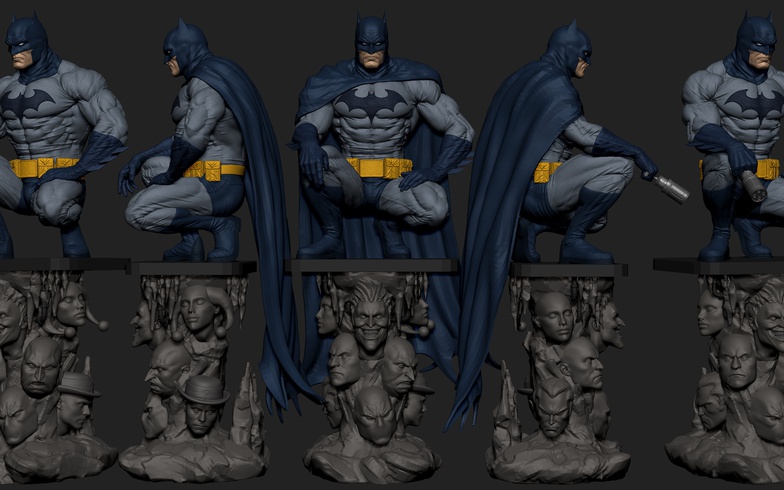 After refining the secondary shapes and anatomy and adding more shapes to the rocks and metal floor, I double checked that the anatomy had the right feel, then focused on detailing every piece the way I wanted, keeping in mind that If it may be produced in a 1/4th scale statue. Details should find a good balance.

I unwrapped every piece in Maya and brought them back to ZBrush and started adding tileable alphas of fabric; leather, metal, and son on. I kept the scale of alphas near accurate to real world, to look believable, adding stitches where required and staying true to the artworks I had collected. This part of the detailing process has a personal approach for every artist. 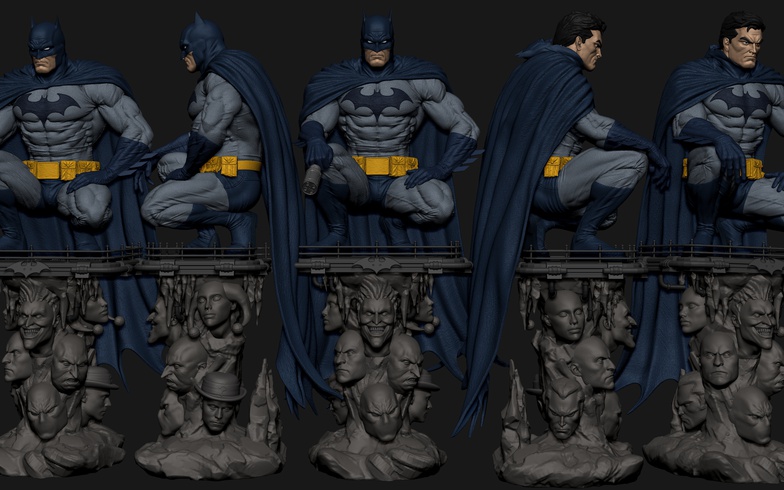 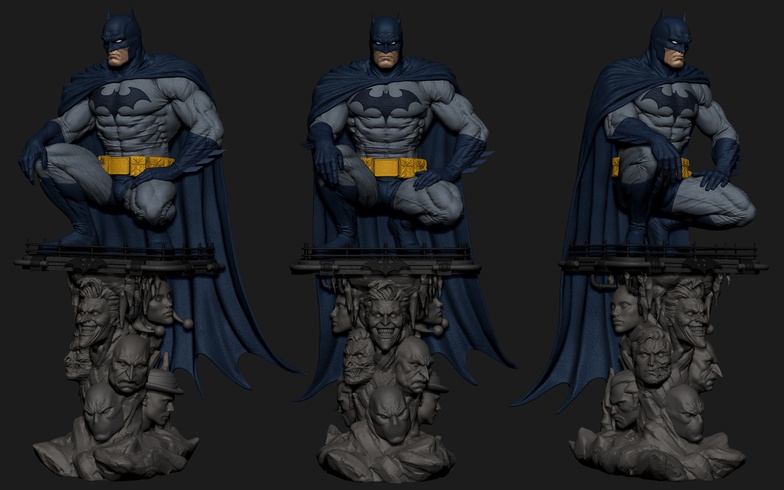 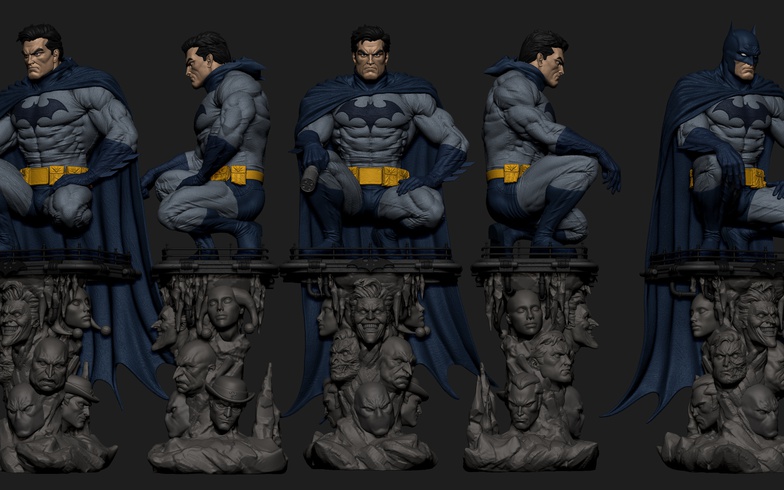 The base is quite different from my other works I have done so far in collectibles. I chose this to challenge myself and give some uniqueness to my fans out there, which they can see and admire. I really wanted the base to be equal to the character with the same detail level.

Since the base is all rock and metal flooring, like we see in Batman animated movies, I went with the same aesthetic – a miniature floor design and cave rock to complete Batman as a whole piece. For the technical part, I first designed the rock in a particular direction and adjusted the faces within that whole block giving the feel they they are within the rock, like you can see in Mount Rushmore images, but I also didn’t want it to be clean so went with more rock damage brushes and rock detail alphas you can find online. 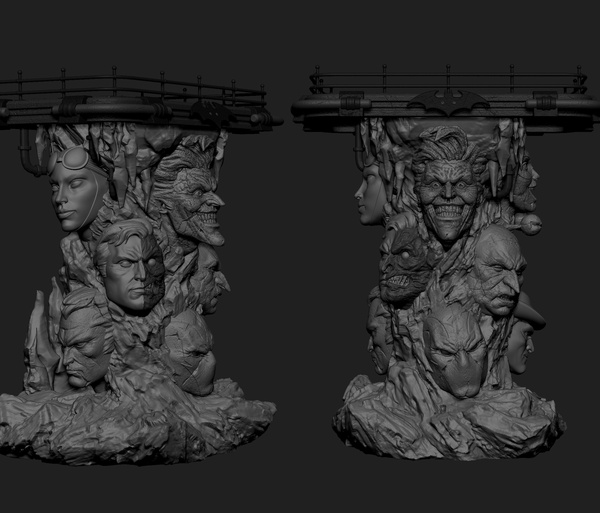 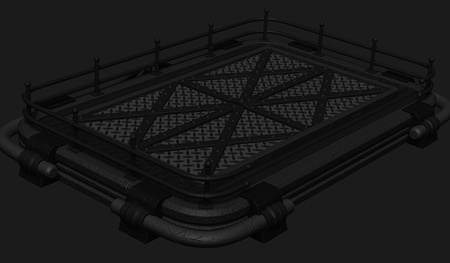 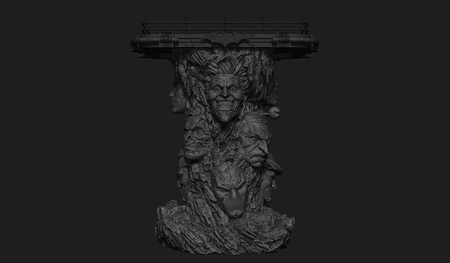 Since it was a personal work, I played with it until the last moments of completion. I gave the Bat metal-treated symbol on the floor for more drama. I added details but not to make the whole piece noisy. The viewer’s eyes should travel to each and every area without breaking the flow.

I added that cigarette and its holder in Penguin’s mouth. Also those big cracks in Harley’s jingles on both sides of her head. While detailing, don’t lose your primary forms or secondary forms in the process. Details should support the first two forms and enhance your piece when you look closely.

While my main focus was to level up my production and tell a story, I kept in mind the collectibles industry standards. I went with a whole turntable so that I could show off the whole aspect of each and every piece. I took some shots from s lower camera angle and upper camera angles.

I have discussed this part earlier too in my Ghost Rider tutorial. I applied the same methods in this one too. A key light is my main source, with a rim light for separating the character from the background and adding nice contours around the edge. A fill light to remove excess dark area and to light up the whole piece. I used Arnold for rendering and did composition in Photoshop, like adding those smoke and flare sparkle effects, and played with brightness and contrast correction, finally adding some color gradient to the background.