Digital creative tools are dynamic and constantly evolving. Recent software and hardware advancements have given rise to the term of hybrid art. This term is also known as 5D art (2D + 3D), and it refers to the disappearing borderline between 2D and 3D art.

For the creation of this image for example, I used exclusively what is broadly considered to be a 3D application (Zbrush), but I also did a lots of 2D painting with it, aiming for 5D fusion.

The goal of this exercise was to create a matte painting in the fastest and most direct way possible. Since time was an issue, I timed myself to see how fast I could achieve an acceptable result, using hybrid tools.

This the process I used:

I sketched out my composition and established my perspective in a very rough way. I used a user made plug in called Zketch pad, to simulate pencil look and feel in Zbrush. This plug in can be downloaded for free at http://www.pixologic.com/zbrush/download-center/download-center.html 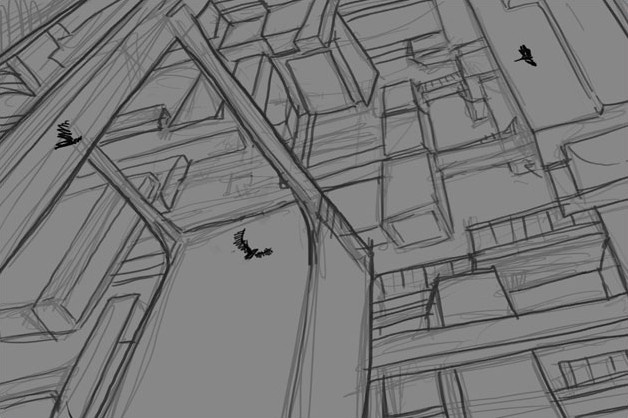 Using my sketch as a guide, I blocked in my basic colours. First I created a blocky shaped Alpha, and then I captured it to use as brush tip. This was the brush tip I used for all of my painting in Zbrush. 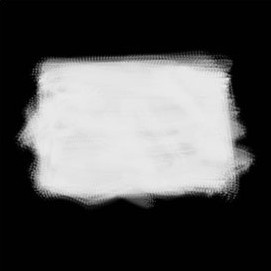 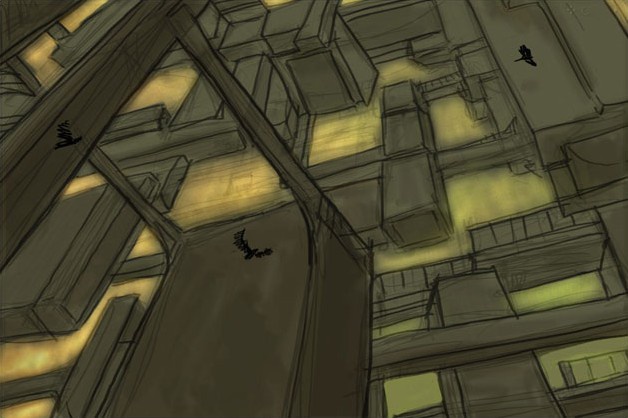 In the following steps, I developed my under painting, always using Zbrush's Paintbrush with my blocky Alpha brush tip and with Bristle option activated. To create the more luminous background I used the Highlighter brush with Bristle mode, and Main colour mode activated. 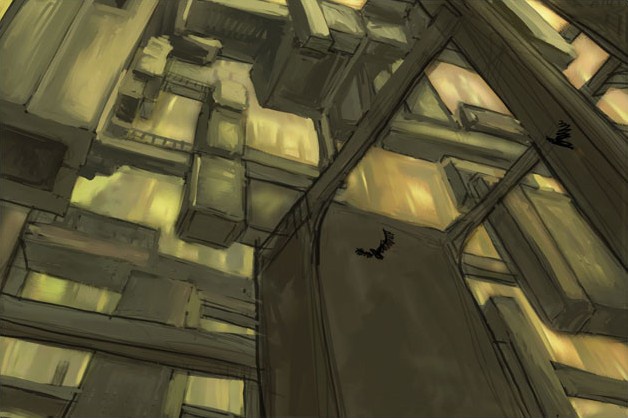 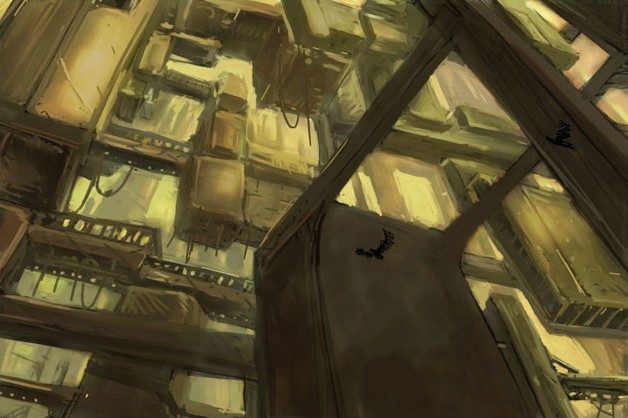 I decided that I wanted a wider, more panoramic dimensions for this image, so I resized the document. Also, every few minutes of working I tend to flip the image horizontally, checking the overall balance of the composition. As I was creating this particular image I was undecided on its final orientation up to the very end. 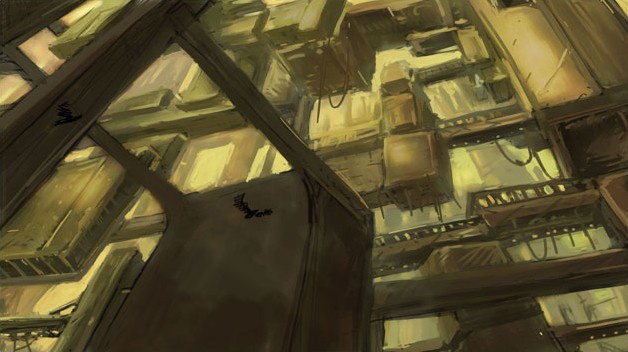 Once my under-painting was done, I started creating the actual 3D models. I created those in a very sloppy way, since they were going to be painted anyway. By using this fast and dirty method I was able to model 26, 3D tools in less than 30 minutes. First I created a few alphas, using just black paint on a white 1024X1024 canvas.

I used those alphas to mask-select polygons on basic primitive 3D shapes such as cubes and cylinders. Then I deformed the polygons that were not masked. Here are some examples of the 3D tools I came up with by masking and deforming:

I did not use any texture for those. Their texture is just a tweaked material shader created by Jantim at ZbrushCentral.

After I had my library of objects, I placed them over my under painting, using the canvas Gyro tool, to push them back or pull them forward. 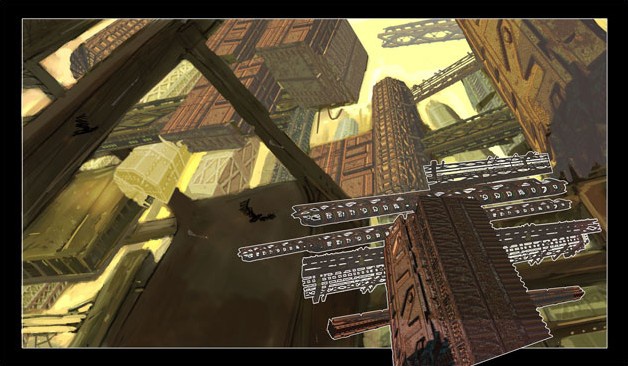 Here is my image with all of the 3D tools placed. Apart from lighting them with 3D lights, I also used the Intensity and the Highlighter brush to establish light and shadows. 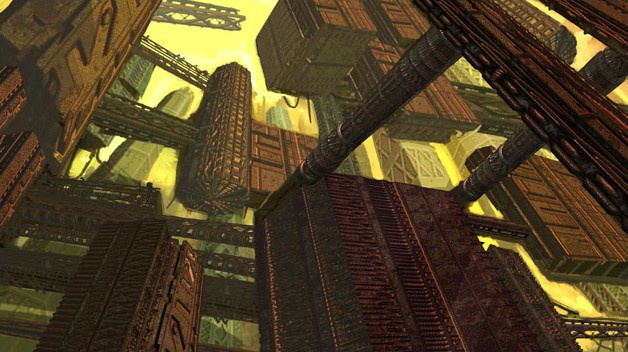 I also used Adjustments in Render menu, along with Colourize brush to adjust the colours to my liking. Also, I activated a pink coloured fog for my render. Zbrush is an ultra fast renderer, so this was actually rendered real time. 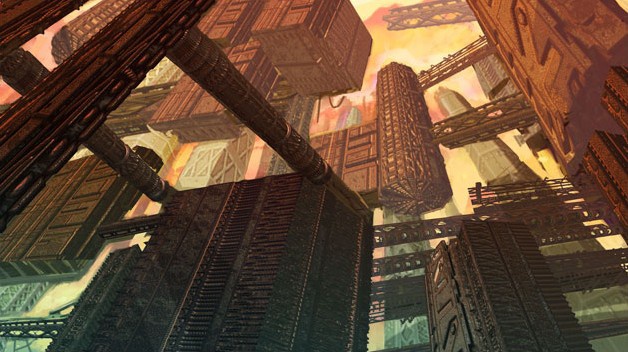 Back to 2D painting. I used the Smudge, Paintbrush and Highlighter brush to paint over my rendering. I also used the Glow and Intensity brush for the artificial lights.
Here you can see the close-up comparison between the rendered and the painted images.

Here is the painted image complete, but without colour adjustments. 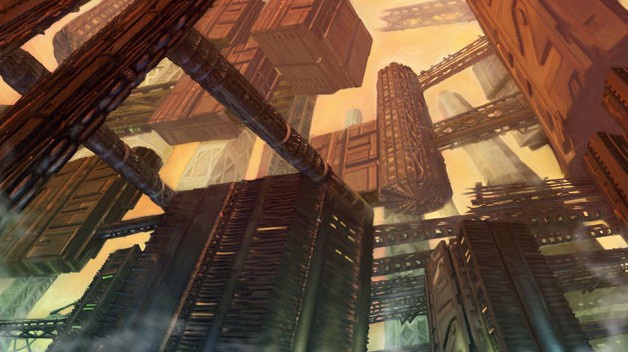 And finally this is the final image, colour tweaked. I also painted the doves in it, because the image seemed static and deserted to me. As a final decision, I switched its orientation. I stopped the timer. Thanks to the hybrid techniques offered by Zbrush, this image took me 3 hours and 38 minutes to create, from rough sketch to finis. 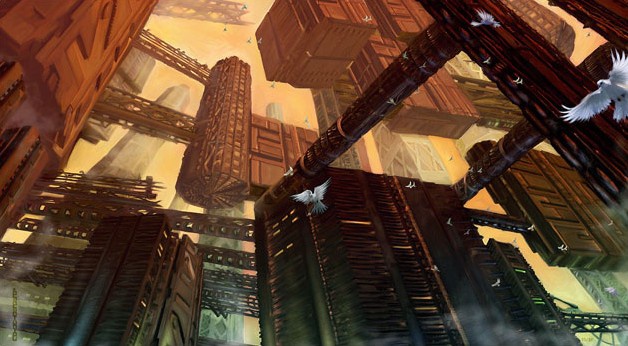