3D Artist Bert Heynderickx - aka Alberto Ezzy - takes a look at various aspects of lighting and rendering in MODO, as well as post-production in Photoshop, in part 4 of this series 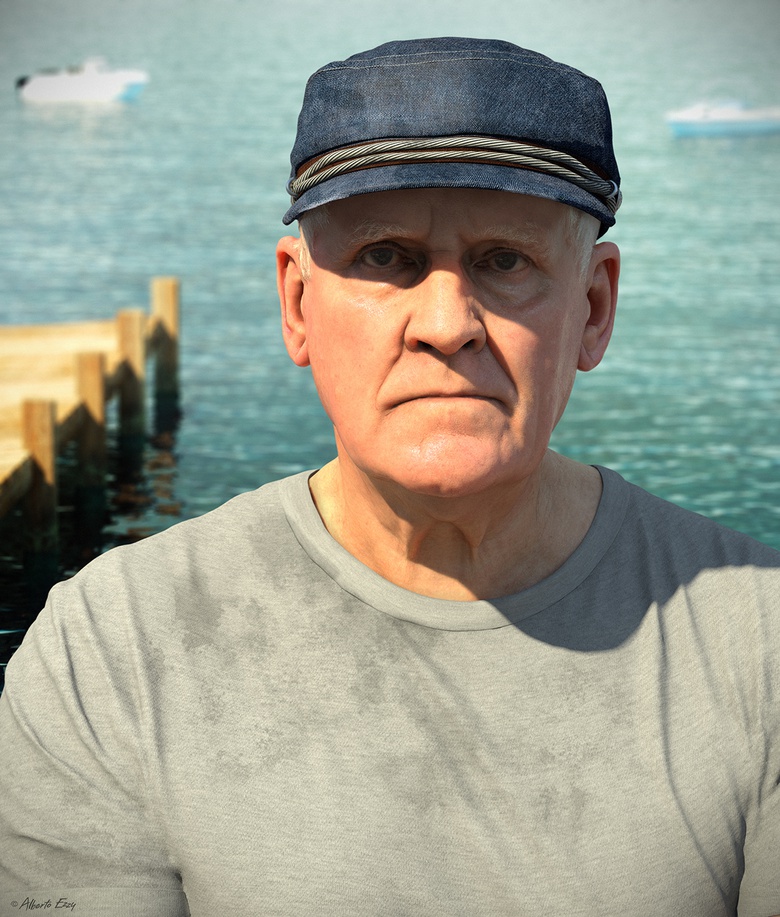 3D Artist Bert Heynderickx - aka Alberto Ezzy - takes a look at various aspects of lighting and rendering in MODO, as well as post-production in Photoshop, in part 4 of this series

In Part 1 of this tutorial series we looked at the creation of a male head portrait in MODO, revealing how to use the Sculpt Tools in MODO to clean up the geometry of scanned head data, as well as adding and modifying a hat model to perfectly fit the character. In Part 2, we moved on to use MARI and Photoshop to create the different image maps needed to feed the Skin Shader in MODO. Part 3 looked at how to import the previously made image maps into the Shader Tree in MODO and take a look at the different Effect settings for each layer in order to properly feed MODO's Skin Shader. So now, in part 4 - the final part of this tutorial session - we'll take a look at the unclamped workflow in MODO, various render related settings, and how to use different render outputs in Photoshop. 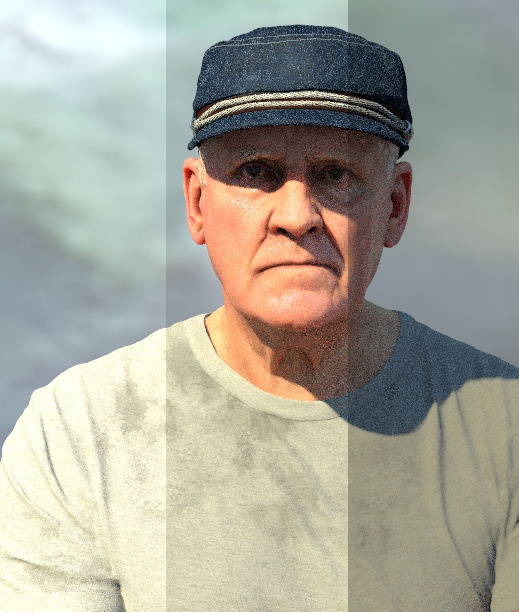 I prefer my MODO renders with Clamping set to Off. Without Clamping you get a deeper, richer render. There are a few places where you can toggle Clamping On or Off. You also need to adjust the Input White Level in the Final Color Output settings, similar to traditional photography, otherwise your render will look washed out or overexposed. 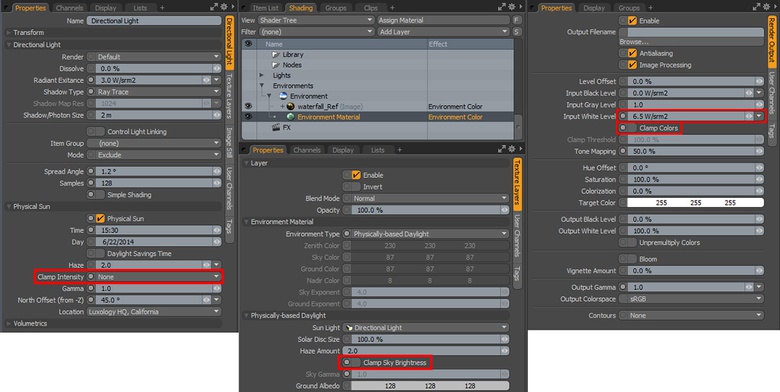 The different locations where you can turn off Clamping

The second layer is a nice outdoor image that I found on HDRLabs (please refer to my Pro Tips at end of this tutorial). The Blend Mode is set to Normal Multiply, which mixes the two layers without darkening the result. 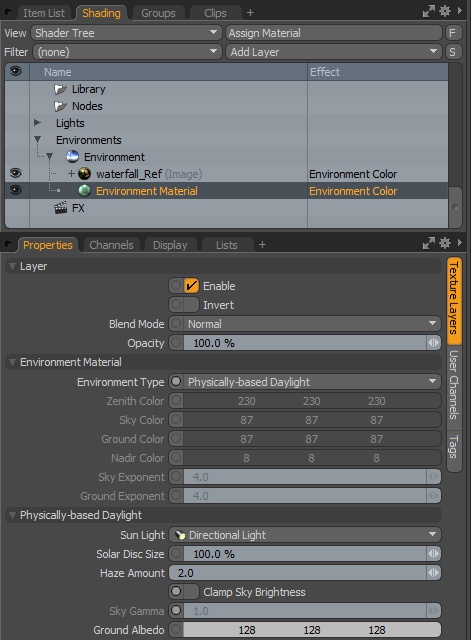 For this outdoor scene, Physically-based Daylight is the way to go! 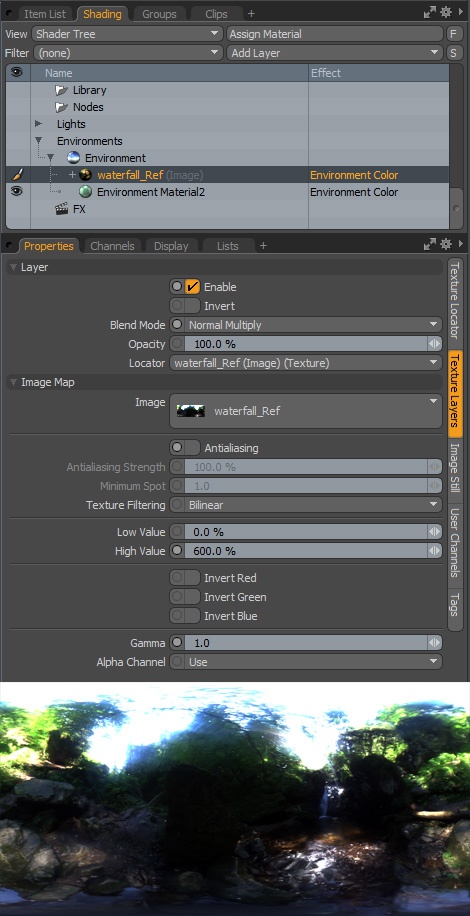 This image will be reflected in the eyes of the fisherman

I'm using the following Render Outputs for compositing purposes in Photoshop: Final Color, Depth, Ambient Occlusion, Surface ID, and Alpha. As noted in Step 1, it's very important to change the Input White Level or your render will look washed out. The value is scene dependent and can vary greatly from one scene to another. Here I have selected 6.5W/srm2 instead of the standard 1.0W/srm2. 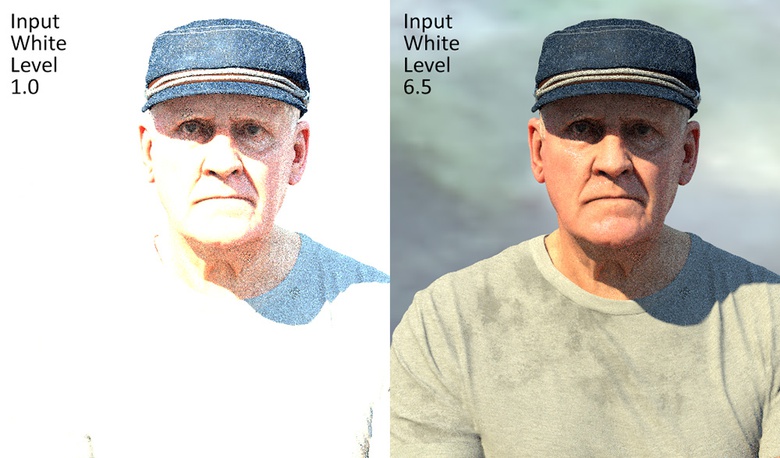 The right Input White Level is paramount in an unclamped workflow

As you may have noticed in the Final Color Output properties, I use a value of 50% for Tone Mapping. Tone mapping is the adaptation of contrast across a range of values. The reason for the manipulation can range from strictly aesthetic to purely technical. Tone mapping, as it relates to MODO, is often meant for the compression of dynamic range in the rendered image; dynamic range being the ratio between the brightest value and the darkest value.

Tone Mapping is another cool tool in MODO's rendering arsenal

In the screenshot you can check out my Render settings. I'll go over the most important ones for you:

• Antialiasing is set to 64 Samples/Pixel. If I was doing the Depth of Field effect inside MODO, this value should be increased significantly. As I chose to do the DOF effect in post (which is faster), 64 will suffice.

• Next to Antialiasing, "Refinement Shading Rate and Refinement Threshold" are the 2 other settings that control the ‘quality' of the render. I usually set these to 0.1 pixels and 5.0%, as I have found that they give a really good result.

• In this scene I use Hybrid Global Illumination because it gives the best of both worlds: it allows the strongest influencing rays (the first bounce) to use the more accurate Monte Carlo method and blend that with the faster and smoother results of the subsequent Irradiance Caching (IC) evaluation. Hence I selected Second Bounce Only in the IC properties.

• Environment Importance Sampling (EIS) is set to 512. This is a feature that takes into account the brightness of an HDR image used for image-based lighting, resulting in more accurate shadows. 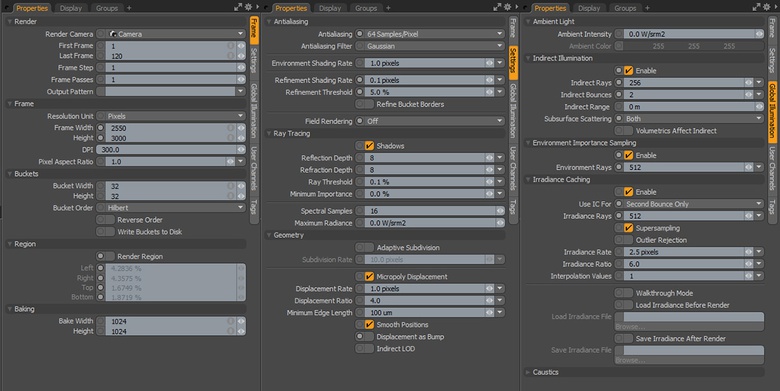 The clear and well-arranged Render Properties in MODO

This is the setup of the background elements: the wooden pier, two fishing boats, and the water surface. When working with water surfaces, always make sure you also have a bottom, or ground. It makes for much more realistic colors
and refractions.

Here I made a rather bumpy sea floor and applied a gradient in the Shader Tree. The gradient goes from light blue to dark blue and is set to Incidence. This is the relative angle between the camera and the surface being evaluated. The result is a nice color palette in the water instead of a rather even and dull surface.

Let's see the difference in Preview: 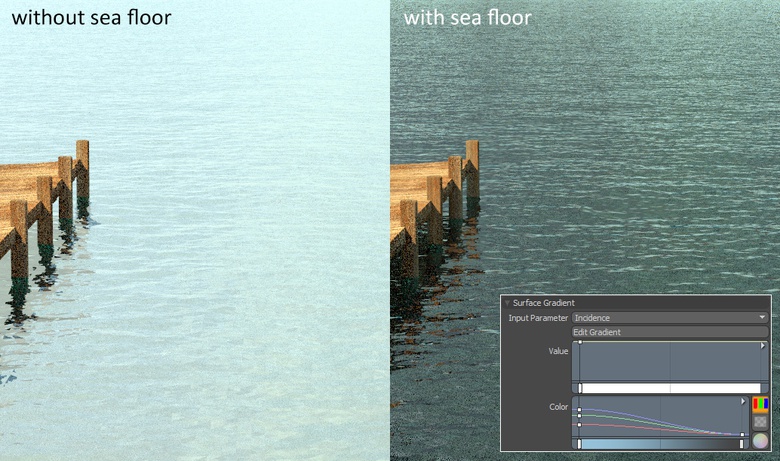 An actual ground under the water makes all the difference

This is the setup of the whole scene

I rendered the foreground and background separately as 16-bit PNGs, so I would have more flexibility in Photoshop. Let's start with the background and apply the Depth output as Alpha Channel in the Lens Blur filter. Next I'll use Magic Bullet Looks (please refer to my Pro Tips at end of this tutorial) to apply a diffuse filter and set the resulting layer to 85% Soft Light to improve my colors and contrast. 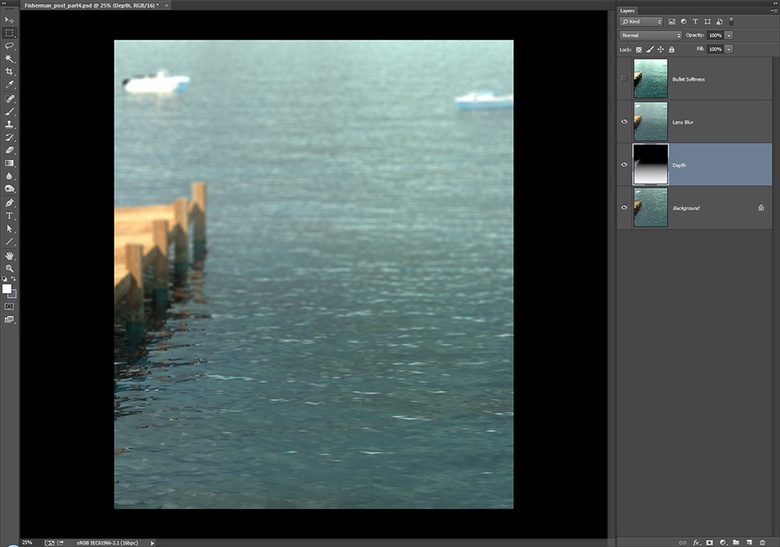 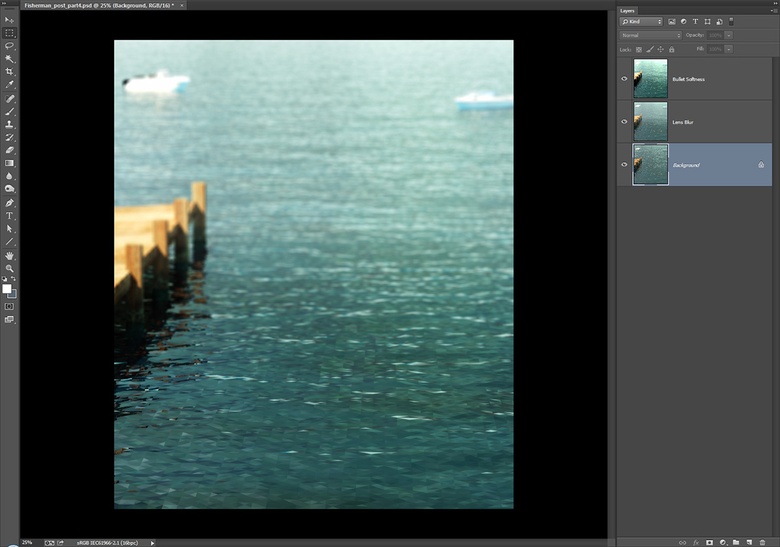 Next I cut out the Fisherman with the Alpha Channel and put him in a separate layer on top of the background. I find the denim of the hat came out too dark, so I select the denim part in the Surface ID output and use it as a mask to drive a Curves Adjustment Layer, which makes the denim lighter.
The shirt gets some color correction in the same manner.

Then I apply the Ambient Occlusion output and mask out everything but the shirt. This layer is set to 25% Multiply to get better definition of the folds of the shirt. 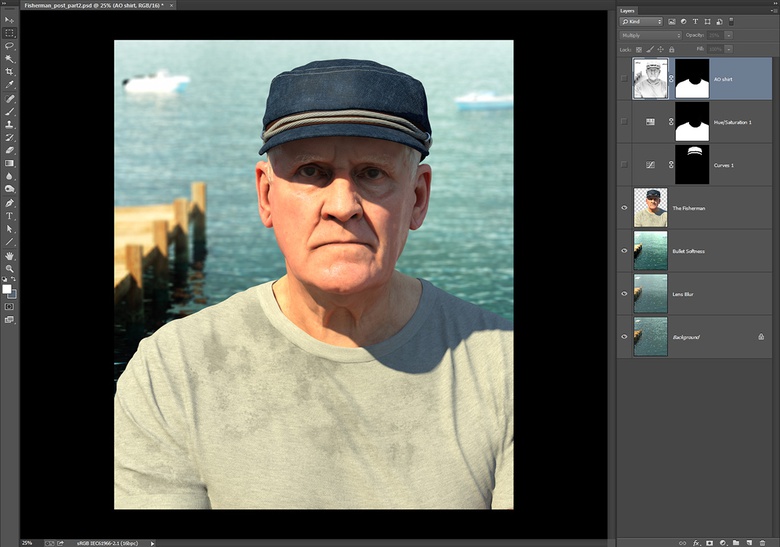 The separately rendered foreground is combined with the background 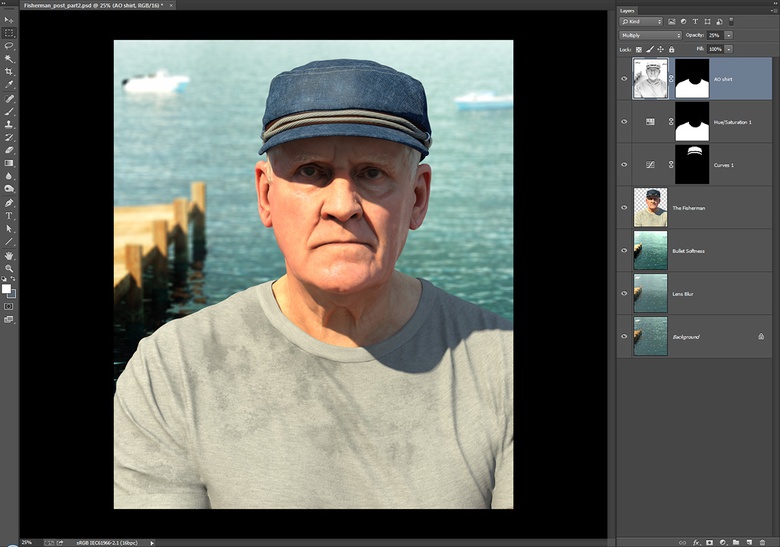 Next is the ‘dirt' part. The stains on the shirt shouldn't stop abruptly where the shirt's border starts, so I paint a little stain on there. I also find the hat too clean, so I look for some stain textures and apply them as an 85% Soft Light layer.

Then I look for an image of worn denim pants with white edges and clone that white denim over parts of the border of the cap. 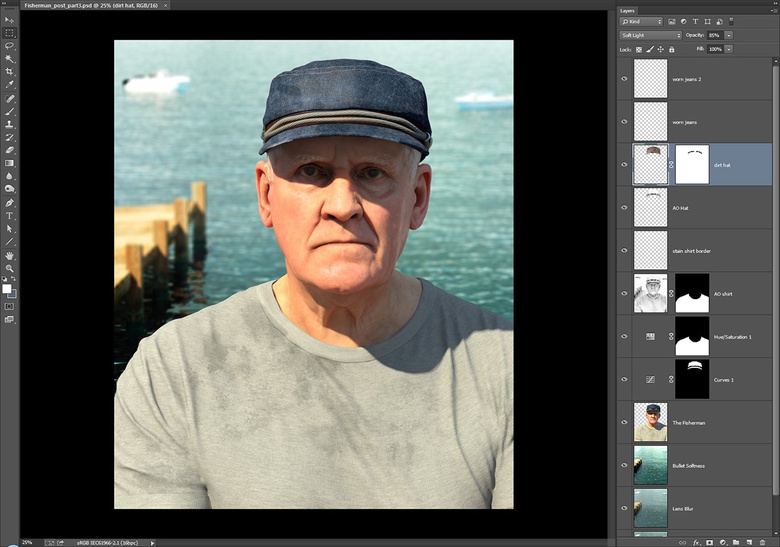 Let's give the hat some character!

The next step is to add some vignetting to better frame the face. You can do this with the Lens Correction filter, or with the Vignette tool in Magic Bullet Looks. The last thing is to slightly blur the border of the fisherman in order to soften the transition to the background. I select the fisherman by using the Alpha Channel, then choose Select > Modify > Border > 25 pixels, feather the selection, and apply a very light Gaussian Blur. 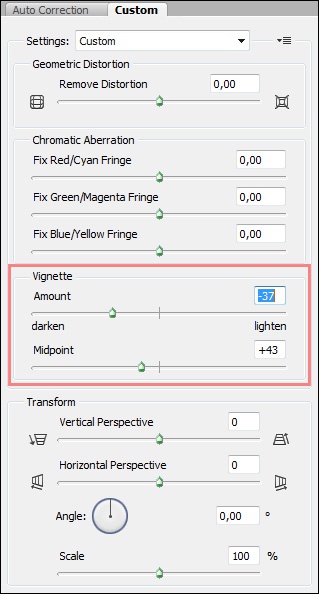 The Lens Correction filter in Photoshop 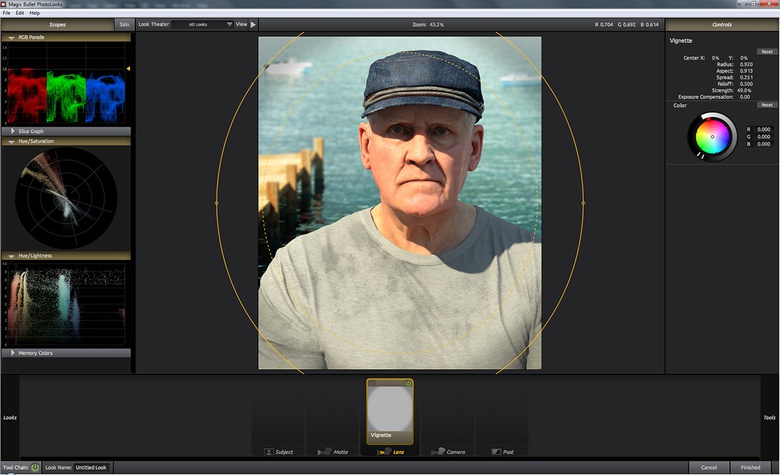 HDRLabs is a great source for all things HDR, and free HDRI sets for smart Image-Based Lighting. Check out the nice and varied collection at www.hdrlabs.com.

Red Giant's Magic Bullet Looks is one of the most intuitive color-finishing tools with a huge library of professionally designed presets to transform the look of your footage in seconds. Use the presets as is, or use the Looks tools to powerfully manipulate color and light yourself!

To complete the tutorial series, here is a video covering all the stages we have looked at over the last 4 tutorials. The Fisherman has been created entirely using an AMD FirePro™ W9000 graphics card.