Technical trainer Chuck Chen teaches how to use Marvelous Designer and Character Creator to create stunning clothing for iClone... 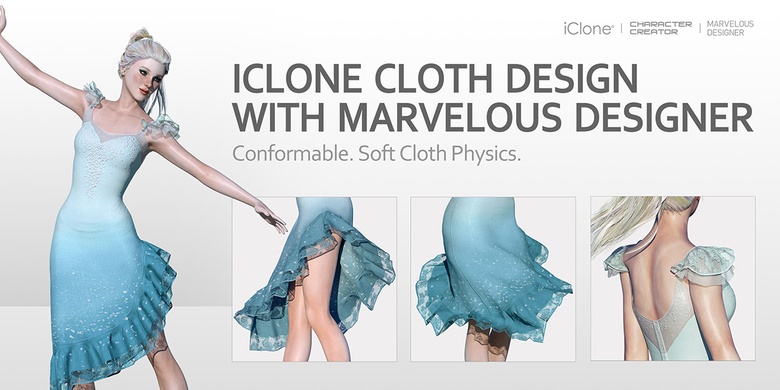 Technical trainer Chuck Chen teaches how to use Marvelous Designer and Character Creator to create stunning clothing for iClone...

Reallusion are always on the lookout for fresh ways to integrate third party software with Character Creator and iClone. Lately they've set their sights on Marvelous Designer, impressed by the power of its physics simulation and intuitive interface. In this tutorial, Chuck Chen will demonstrate the advantage of combining MD's superior design environment with CC's powerful clothing system to create an animated flamenco inspired dress. 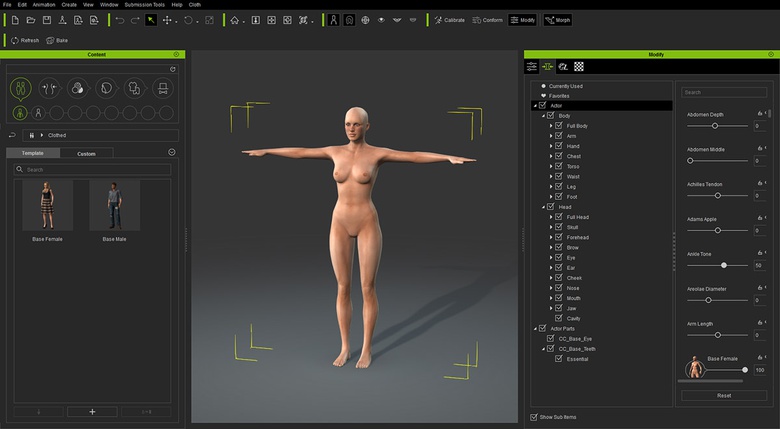 First and foremost, export the female base body from Character Creator in OBJ format, without the eyes and teeth. Then bring this OBJ file into Marvelous Designer with the scale set to centimeter. Depending on the body type you desire for fitting, you may also want to first morph the body in Character Creator. 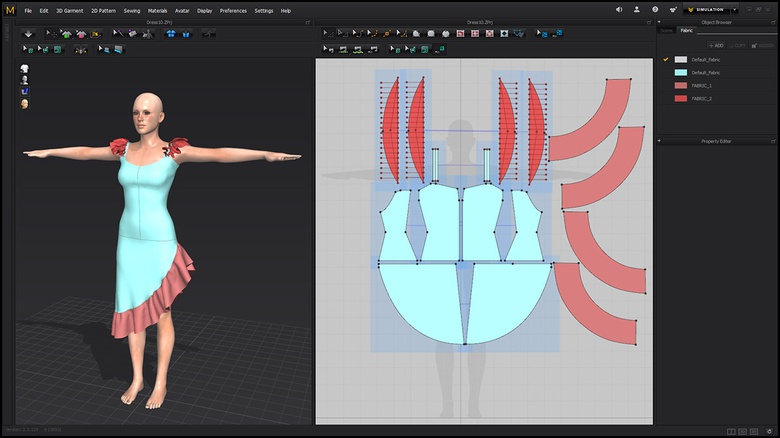 Once the template body is prepared, start to create the dress based on some reference pictures and images. Pay special attention to mesh density on the portions of the cloth as that can determine the level of detail achievable. For example, the frills of the sleeve cap and skirt will need higher density to support better looking folds. I do this by decreasing the Particle Distance(mm) setting under the Property Editor. Also MD's subdivision can be erratic, so I like to add Internal Lines to control the edge flow and subdivision. 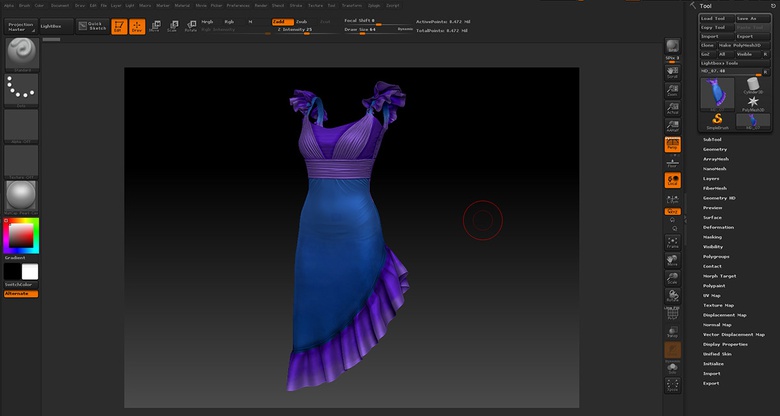 Next, enhance the details of the dress by making a high poly version by exporting an OBJ of the dress from Marvelous Designer and load it into ZBrush. Also load the base body template as a SubTool because the smoothing function in ZBrush will also distort the clothing, and the base body template will serve as a reference for fixing areas that no longer fit. Sculpt the details into the dress like small wrinkles and fabric surface details. This is also a good time to lay down a color foundation with the ZBrush Polypaint feature. 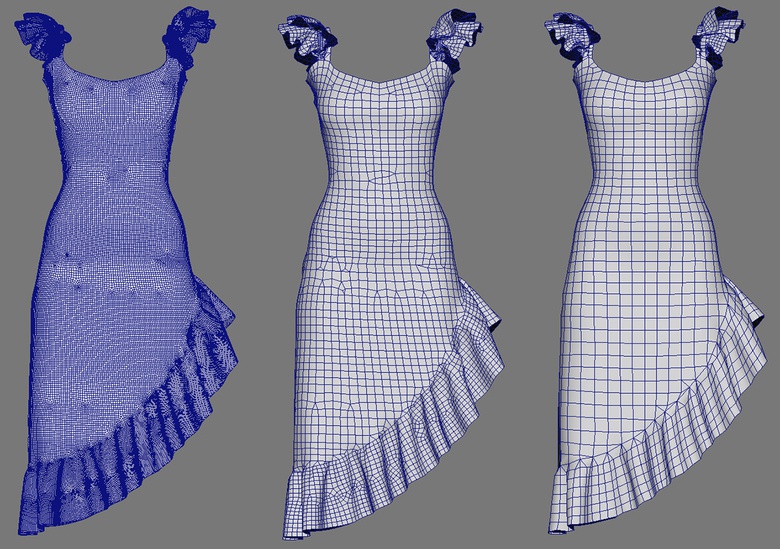 Creating a streamlined mesh is necessary to simplify the weight painting process and allow iClone's real-time environment to work more efficiently. First, export a middle subdivision level mesh from ZBrush into a 3D modeling application. I prefer to use Maya for its handy Modeling Toolkit and Live Surface function. From the high density mesh, derive a dress model with ideal edge-flow and mesh density, and finish off by UV mapping the new model. Make sure there are no distortions in the UVs by using a series of test maps.

I use xNormal for most of my high to low poly projection needs due to its simplicity and efficiency. Even with mediocre system specs, xNormal can process millions of polygons without depleting the memory. First, take the highest subdivision model from ZBrush and the low poly retopologized model from Maya into xNormal and begin the projection. Once the vertex color, normal, cavity, and ambient occlusion maps are generated from xNormal, take everything into a 2D paint application for editing. In this case I use Photoshop. 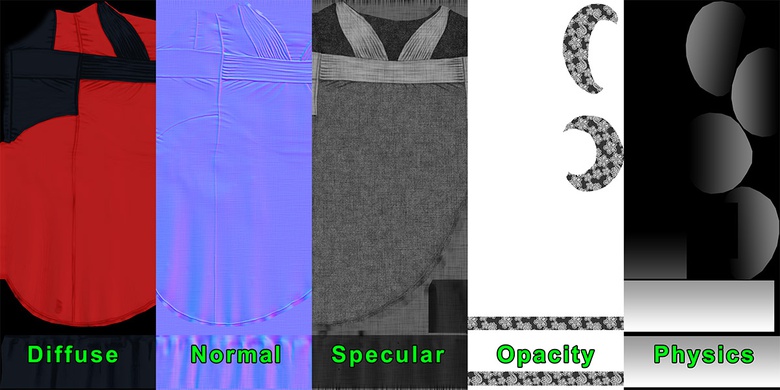 By utilizing the prior projected textures, one can create the final diffuse, normal, specular, and physics map. Take this opportunity to experiment with different color combinations veering away from the foundation colors laid down in ZBrush. The physics map is a gray-scale image with light parts of the map having the most cloth physics influence, while the dark parts have more bone skin influence. Keep in mind that at this point, the physics map might not be ideal. Only when we bring the map into the physics properties of the dress inside iClone can we start to tweak and iterate over the map for the best results.

Now it's time to prepare the dress for Character Creator. Do this by skinning the dress to the entire skeleton of the base model and copy the weights from the body over to the dress. Then fix and adjust the skin weights, particularly in the middle regions of the dress where it is not spread evenly between the legs. Then, create and apply a Blinn shader with the input diffuse, specular, and normal textures. As a final step, export the character along with the dress in FBX format. 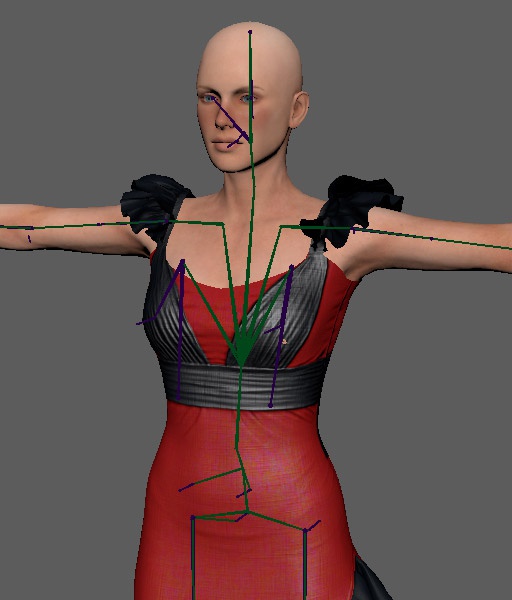 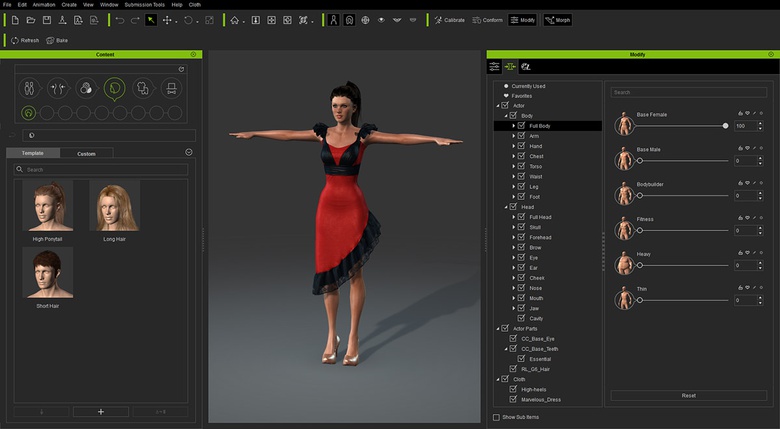 Drag the FBX file directly into Character Creator and adjust the material of the dress and save as an article of clothing. With the custom dress ready, reset the scene and apply it to a new character. Then apply the shoes and hair while adjusting the shape of the character using CC's powerful morphs, and its textures with CC's versatile Appearance Editor. There are a lot of possibilities here, as the dress can also conform to a plethora of morphs available in CC. 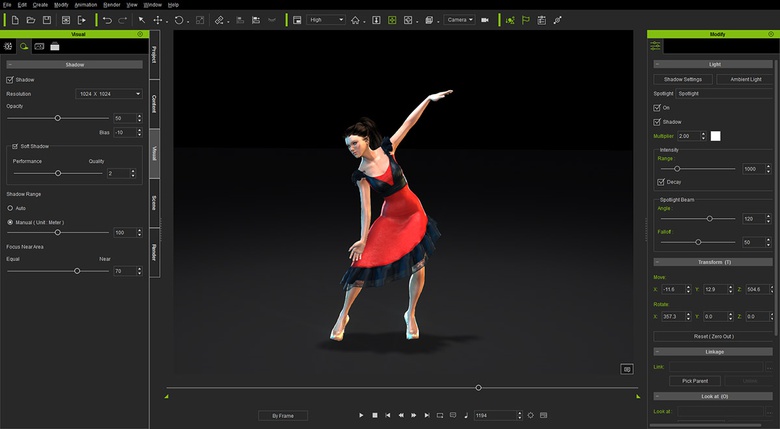 Once the customization is complete in CC, save out a project file and send the character to iClone using the direct export button. Inside iClone, set up the lights and stage and apply a dance motion from the expansive motion library. 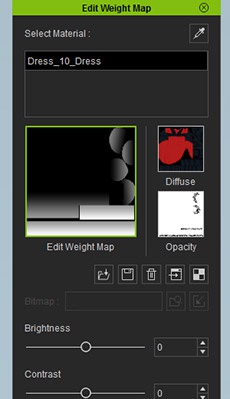 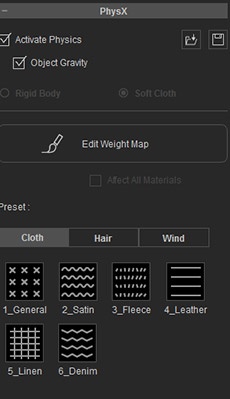 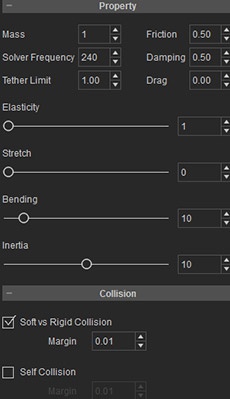