I have always been interested in history, particularly the period from 1939 to1945, so I decided to make a couple of illustrations to depict my personal feelings and emotions based on images I have come across and places I have visited.

My first goal was to capture the viewer with the dramatic atmosphere and maintain their interest with it. I used Photoshop CS2 with some custom brushes, textures and historic pictures for references.

First of all, I made a quick sketch in black and white to put in the general lights and create the scene settings. I formatted my composition in a V-form with the characters in the centre of the image, to keep constant attention on them. I used big size brushes for a rough base of what I wanted the drawing to look like. 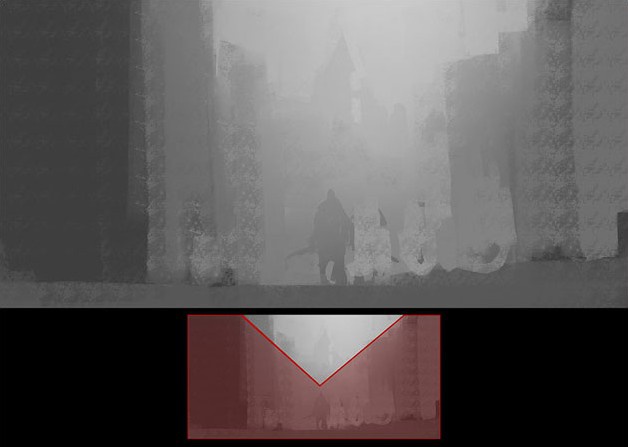 I pushed my sketch a little more by adding graphic elements such as the figures of trees and I worked and added to the middle tones and characters. The trees were created with custom brushes, and I used big round brushes in texture blending mode with opacity of 50% to bring out the fog in the foreground.

After, I added to the atmosphere by using a colour layer in the "colour burn" blending mode. I often use this mode because it quickly creates a preconception of appearance by colouring the middle tones and reinforcing the black ones. Nevertheless, this coloured range never lasts for a long time in my pictures because I often change the tones of the atmosphere according to the process.

I began to add details by going from the background to the foreground. I finalized the sky and worked the city by using pictures references that I repainted on a layer with a normal blending mode. My coloured range changed and it is henceforth in a camaÃ¯eu of browns. I use the adjustment layer "gradient map" to have full control of my colour pallet.

Step by step and by using successive layers in normal mode, I enjoy painting graphic effects like fires, smoke or the statue in the middle of the picture. I tried to use strong symbols that quickly take us in a war scene.

Before deciding to keep any elements in my illustration, I spent a lot of time painting until it reached my expectations. At this stage, I try different methods of painting being sure to save all my tests in case I should need them later.

I thought my picture looked too flashy, so I decide to return to a camaÃ¯eu. I often go back to old versions when I feel that I have not tackled the harmony between colours. I also decided to modify the right side of the drawing. I extended the sky above the wrecked city while trying to keep focus on this sort of basin where the characters are. I worked the city ruins again by adding a layer of fog between the layers of building, to increase the depth.

At this point I concentrated on the foreground, which now I think is really too dark. I went into details by painting buildings, electric posts and pavement Street in the foreground. Here I used picture references which I repainted and textured in overlay mode. Nevertheless, these last elements brought nothing more to the drawing, and I found my image became a little bit boring. A half hour for nothing...

Restarting on the image number 6, I added details by painting flames with a round hard brush in colour dodge mode. I also wanted to bring a true demarcation between the set and the characters so I painted a wall with a portal. My idea was to send the message that: 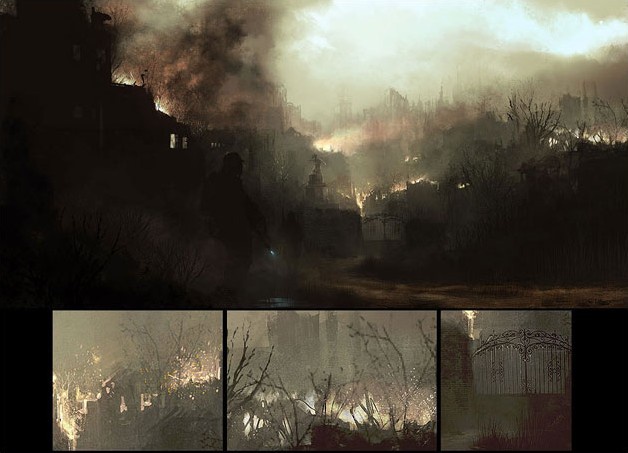 We have almost finished. Now I concentrate on the characters, going by some pictures reference; I painted the characters and tried to incorporate them in the scene with several layers of fog and different colour contrast. I took time to finalize the silhouette of the soldier in the background because I often remember one of my art school teachers who said to me: "Your character should have all possible details; if the global figure is not good you will not manage to make it a believable character" 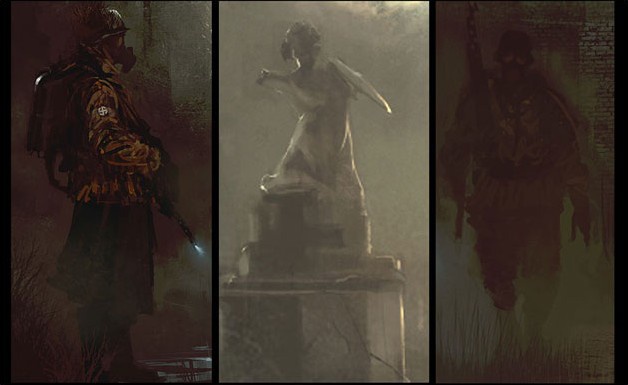 Finally, I made a copy of my image and did the last colorimetric adjustment by using about every possibility Photoshop offered...levels, colour balance, hue and selective colour.

That's it, after writing this I think my own technique is a little bit messy, in my mind, but I hope you will find it interesting.