Making Of 'Window in Mergozzo'

This is the Making-of "Window in Mergozzo". The picture was created using the great 3D Total Texture CD's. I will mainly be dealing with textures in this tutorial, I will also quickly talk about modelling and lighting.

First off:
I think it is of advantage to draw a sketch of a planned project. Of course that is not an absolute neccessity, but with the aid of the sketch it is simply easier to imagine the final scene. A simple sketch will do.

No need to paint a masterpiece ;) 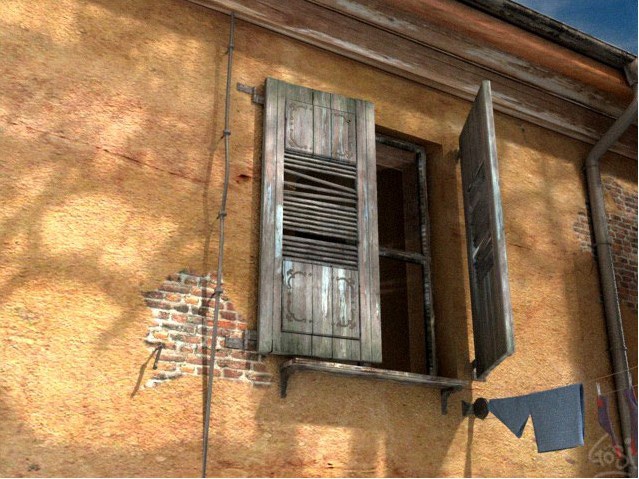 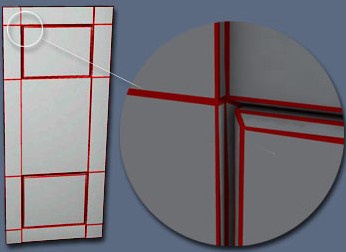 the piece of inspiration

The decorations in the corners of the upper and lower squares are simple extruded splines. Be creative yourself or find reference on Google.

Model a wall and bolean a hole for the window out of it. In general it is better to put the holes into the wall like they were made on the shutters, because I don't completely trust Bolean Operations ;), especially because Boleans mess up the geometry and senselessly increase the poly-count. This time however, I was too lazy! Build a windowframe and a windowsill and to round it off, shuffle around the small parts of the shutter. Make it look eroded.

Pay attnention to the detail: create as many as possible, really many! Have I mentioned details yet? ;) Of course you can polish up your scene with good textures, but it a very important aspect to make the models as detailed as you can. If you are stuck, get a digi-cam or a sheat of paper and go outside. Nature features the most details!

The modelling is kept quite simple, because I wanted to concentrate on textures.

So, let's begin. The windowshutter (I will only go into those here) are but boxes with some extruded faces, that were moved into the desired position.

The large polygons in the center are deleted and the vertices in between are welded, so that you are left with a nice hole right in the middle of the shutter. Then create one of the small boxes and copy them along the shutter to fill up the hole.

The socks were made through boxmodelling. The drainpipe, a lofted spline. The gutter and rope are too. The clothes on the rope are thin boxes calculated with Sim Cloth. The rest was either made out of a box or splines...

So, let's move on to the lighting. Many will only think about lighting, when the scene is completely down, ie. when it is ready textured. Myself, I prefer to light my scene as soon as the modelling is complete, before it is textured, because I like to see where I'm going as early as possible.

I used a shadowmap for this scene. That way it just looks more realistic. Look around outside. There're few houses that don't have some tree's shadow cast on them. I also placed a simple box in front of the light, that represents the shadow of a roof on the other side of the road.

There's not much else to say about the lighting. Since I used Global Illumination, I managed to setup the lights quite quickly. Naturally you can create the same or a similar lighting without a GI-Renderer - but it will indeed take a bit longer. 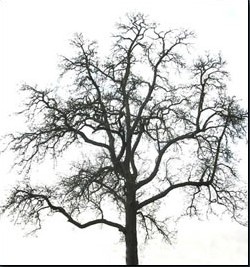 Ok, coming to the fun part of this tutorial, the textures! ;)

I allowed myself some time to browse the 3D Total Texture CD's, and struck gold: a great texture for windowshutters. I intend to have the wood look a tad older even, so I picked some other texture- and dirtmaps, played around with layers in Photoshop and ended up with this: 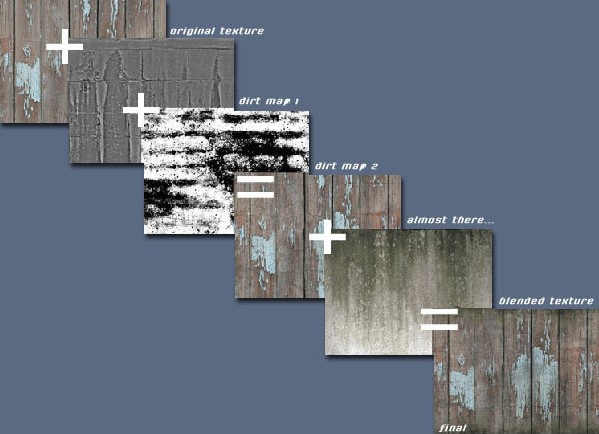 The walls were textured accordignly: A texture to base on plus a set of additional textures and dirtmaps all blended together in Photoshop. 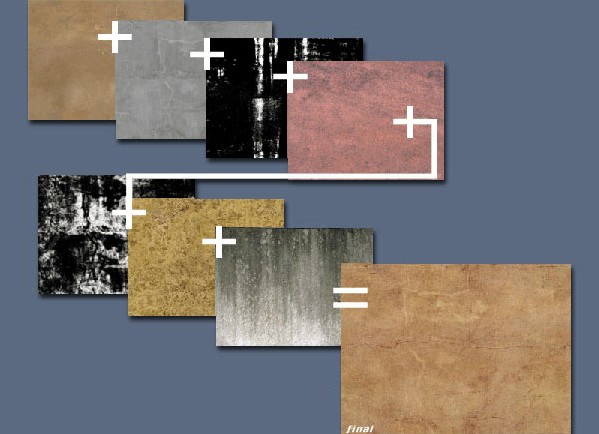 With that the basic texture for the wall is done. Looking nice, isn't it? Just a bit too dull, yet.

A Mix-map will correct that! All the other objects are actaully pretty easy, that is: I just grabbed some textures that I found on the Total Texture CD's and applied them to the objects. 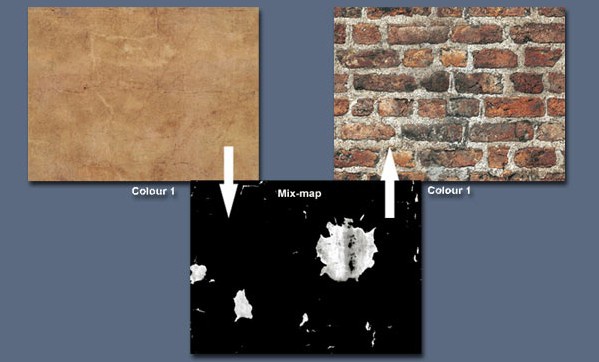 Â
And now hit the teapot to render up your image and off you go!

Ciao everyone, have lots of fun, and I hope you've learned something too. ;)
Thanks to Tom and Chris, for the Offer and Aid. Creating the scene and this tutorial was alot of fun!