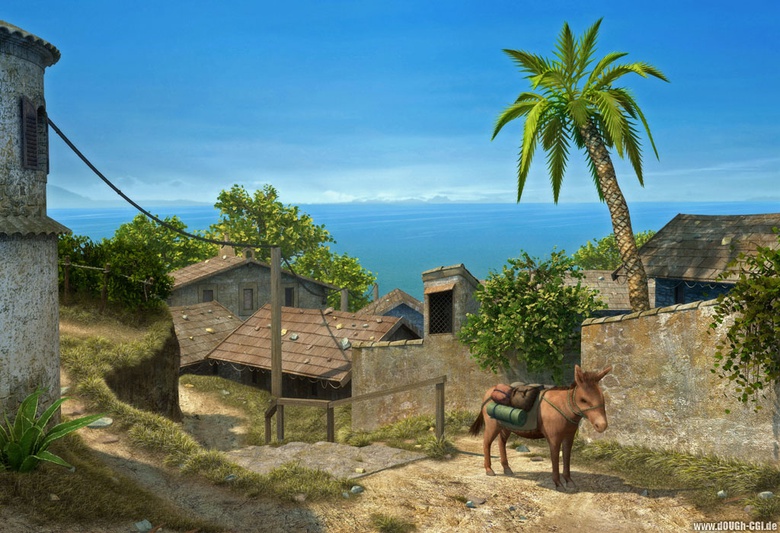 This scene was made using Lightwave for modelling, Photoshop was used for the textures, background image and post work

I wanted to create a warm and pleasant nature scene. I have seen an old painted picture, which used the same perspective for a view over a valley. I wanted the viewer to look over the ocean instead. For such an image I needed an environment with the hill itself, a few houses and a lot of plants. 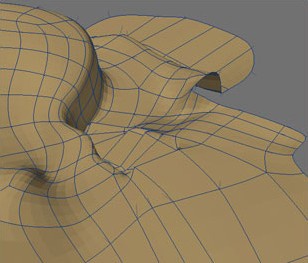 The most important model was the ground. It was created point by point very rough. I created a basic scene in Layout for better feedback of my changes. When I had the basic form, the ground-model was sub-patched and freezed at a low level.

Refinements were made via point modification. For some areas I used Lightwave's edge-tool to add more detail. The new points were moved to form an edge - this was made to indicate the walkway.

Other details were created like the three sticks with the rope on them up on the hill, the power supply line and the handrail. For the big stones from the stairs, planes were made in top-view - these planes were then extruded and bevelled on top. The finished objects were placed on the ground-object. 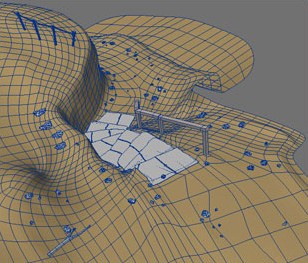 The little stones were created as segmented boxes. I created five or six different stones and applied 3 different materials. I did not use sub-patching for these stones, so they look very sharp. I placed these little stones along the ground 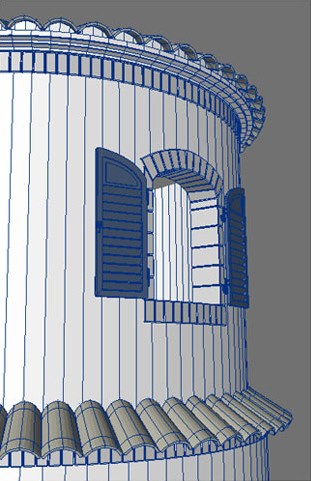 After the ground was finished, the tower on the left was made via the lathe-tool. Boxes with front-polygon bevelled were placed along all edges - around the window and right below the shingles. The shingles are also primitive sub-patched forms, a bend box with 4 segments

For the wall, first the basic shape was created with connected quads. This shape was aligned to the bottom. Then it was extruded to make it solid. The window in the wall was made with the bevel-tool. The same shingles from the tower were placed on top of the wall. The only other details were the window grate (made by crossing boxes), the window frame (boxes with front-poly bevelled) and the little roof over the window. 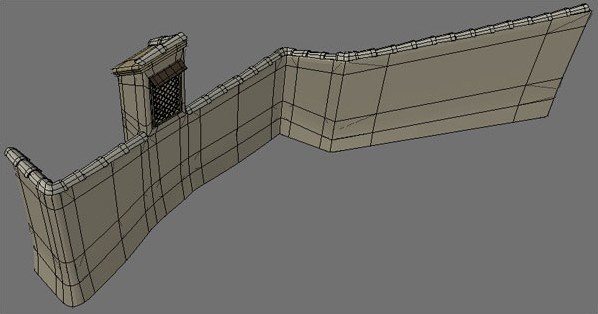 The other houses were even simpler. Only low poly models were created. For a house, there was a segmented box for the main-part, and another for the roof. For the windows and the planks on the roof boxes were used once more. To give it a little more detail, a rope hanging down the roof was made as a curve. A square poly was used for rail clone, the finished rope was sub-patched. I placed the same little stones (made for the ground) on top of the first background-house.

The finished model for the house was then copied and placed in modeller, with the scene loaded in Layout. The stones on top were modified, some were moved, some deleted. The copies of the house got different materials for the lower part and the roof, some other details were added 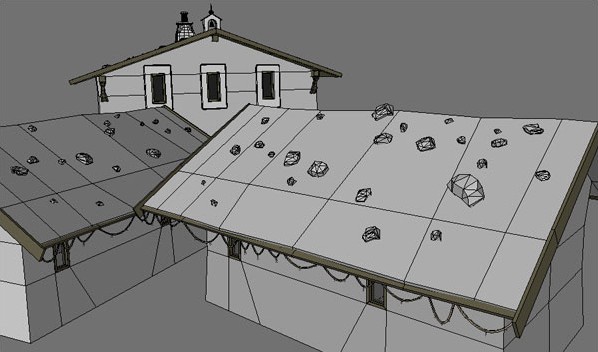 For the trees, the bushes and the palm tree Xfrog was used for modelling. The plants were exported to Lightwave, after a few modifications they were textured. Since the agave was a pretty nonrelevant part of the image, I did not (re)create the model, but used the already perfect example that came with Xfrog and retextured it - shame on me for that one.

The donkey, although not looking very realistic, was a little more work. After looking for donkey images (Google) as reference, I found one side-view which I used as background for modelling. The donkey was made poly-by-poly, first very rough, then more details were added to enhance the simple mesh. 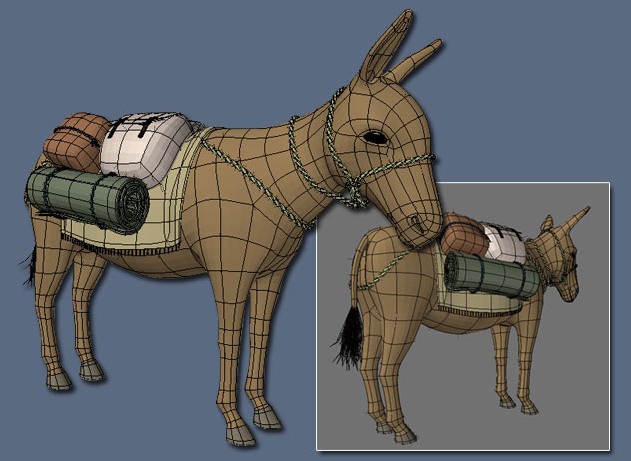 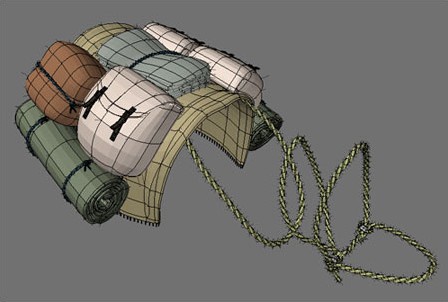 The packages on his back were also made poly-by-poly. The mat-rolls were made unrolled first, then rolled manually - each small selected part was rotated a few degrees until the roll was complete. All the packages were connected via ropes. I used "Rope Editor" - great free demo-plugin from Norman W. Johnson - to create these ropes, as I wanted more detail than in the background-ropes.

For all objects beside the ground and the donkey, I used Total Textures v12 + v13. For the tower, 3 different materials were used together with dirt-maps and procedurals. I used cylindrical mapping for the different maps.

For the wall an UV-map had to be created. The mesh was flattened by rotating the different parts of the wall toward one direction. A morph map was used so that the base model would stay intact during deformation. After the model was made plane, the UV-Map was applied as planar mapping. Then the morph map was deleted.

A screenshot of the UV-Map was used as background for texture-painting in Photoshop. Different textures from the Total Texture CD's were used to compose the color-map of the wall.

For the bump-maps all layers were copied. The copies were desaturated, then the layers with the bricks were inverted and changed in contrast, while the other layers stayed the same. That is made, because the bricks are darker than the fugues, for the bump-map, this has to be changed to make the bricks stand out. I also created a dirt-map by composing dirt-maps from various Total Textures.

The material of the wall used the color- and bump-map. For diffuse the color-map was used at 30 % opacity, also a black/white gradient with input parameter set to "incidence angle" was used. The bump-map was also used as specular-map. The dirt-map served to lighten up the edges of the wall - it was used as alpha on the color-channel. The map was also used on the bump-channel. This material-setup was basically used for almost all stone, wood and ground materials.

For the houses the UV-map was created the same way it was made for the wall. Morph-map - all polygons rotated towards the same front view - UV-map applied. Textures were used from the Texture-Collection directly - only the colors had to be changed. Procedurals and dirt-maps were also used.

The plants were textured with leaf-images from the Total Textures V10, and also with Textures from V12+V13. Transparency-maps for the leaves are included on the CD. Both transparency and color-map used an UV-map. These Maps were automatically generated by Xfrog and were modified in Modeller.

I used the reference image for the donkey also to texture him. The Image was used in Sasquatch for the color of the fur. The appearance of the donkey was controlled via the fur-setup in Sasquatch.

The ground was textured with photos I made from the sandy streets in my hometown. All photos were arranged and composed over the test-render of the scene. I made the textures for front-projection. The bump-map was made from the color-map, but before it could be used on the bump-channel, it had to be backed to an atlas-UV

The scene for the complete render was based on the scene made for the model-creation. I used one Area-Light as the sun, coming from the left. As usually I used only this one light and Radiosity. The ocean in the background, was composed with photos taken in Spain, the sky used self-made photos and a few sky-images from various Total Textures CD's. 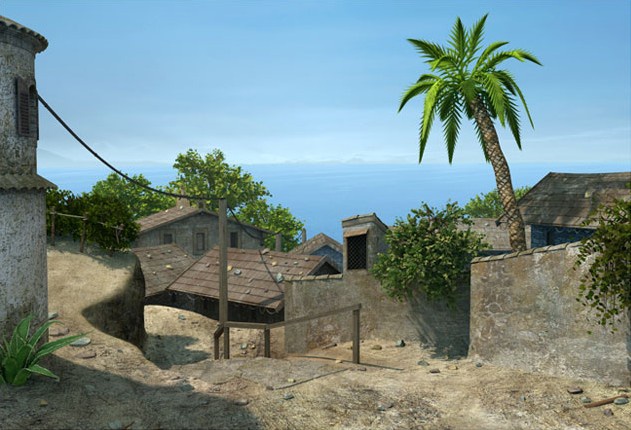 For the donkey, the first scene was altered: All objects but the ground were removed. Since Sasquatch was used for the donkey-hair, the area light was changed to a spotlight, Radiosity was turned off. A higher ambient light the ground, the alpha-channel was set to "Shadow Density 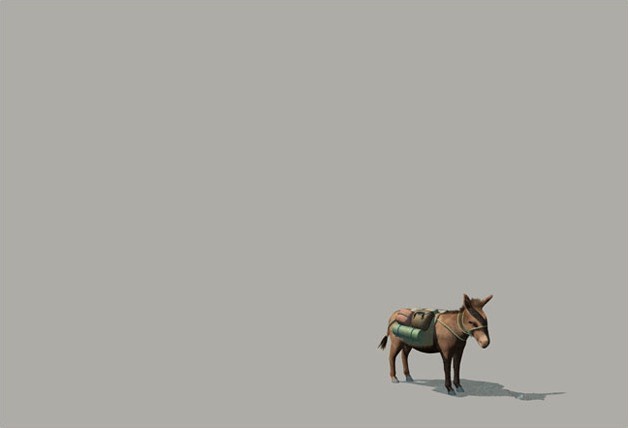 The scene-setup for the grass was almost the same as for the donkey-scene. To place the grass I painted a black and white density-mask in Photoshop for front-projection. This map was backed onto an UV-map, so that Sasquatch could use it. 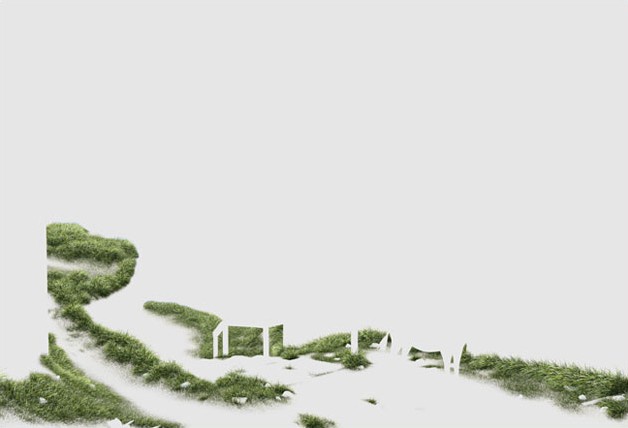 In Post-production all elements were composed with the help of the alpha-map. Some minor mistakes in the image were corrected by painting. Color and the contrast were changed, also a very subtle blur effect was added.

That's it. I hope the overview was of any interest for you. If you have any additional question, feel free to contact me via my homepage.