Andy Walsh shares a step-by-step process of how he created his image Victorian Gaol.

This image was created as a paint-over from a photograph I took when visiting Liverpool. I wanted to see if I could take an image of a Victorian building and age it to look like it was sitting in its original time period.

Obviously the first step in a photo paint-over is to pick a photo. In this specific instance I wanted to find something that could be turned into a dark period piece, so my requirements were that the image have no directional lighting (so I could turn it into a night shot more easily) and that it have the potential to be tweaked into looking convincing? that would mean being able to easily remove any evidence of modernisation.

Of course, interesting perspective and composition is also important. To that end, I cropped the top off the image to make it less vertical (see inset for original aspect ratio). 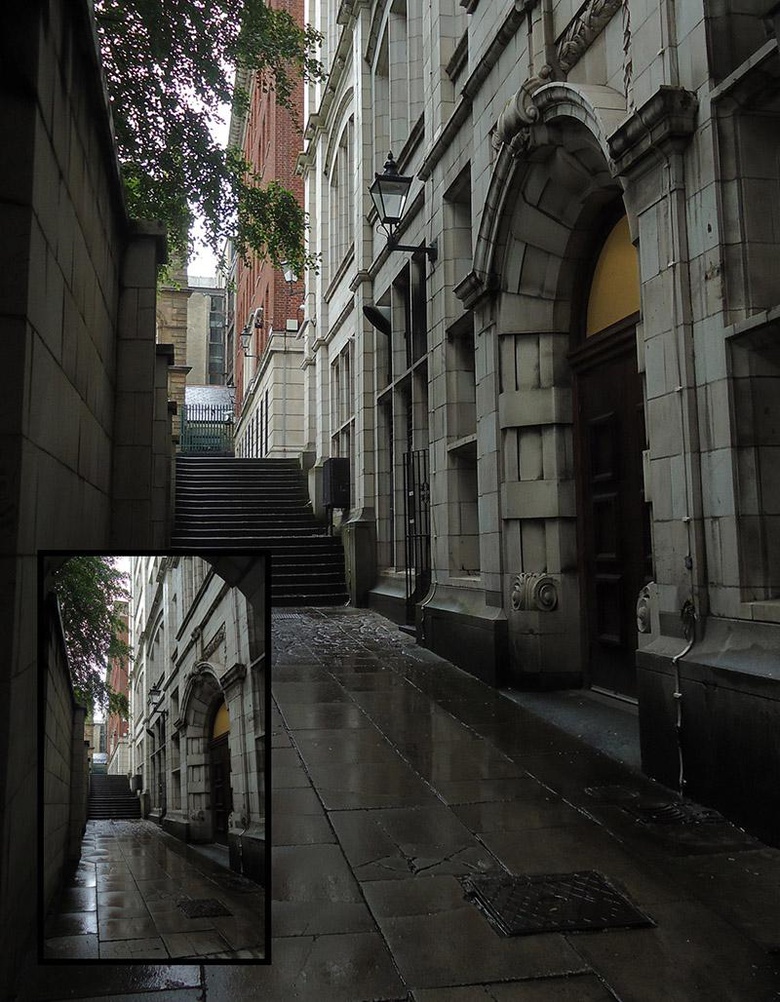 So here I've removed the far-ground buildings and replaced them with an image from cgtextures.com which looks more in keeping with the period. I also added some up-lighting to that far plane, which I would imagine comes from street ambience (lamp light etc.). You can also see that I've removed the branches and put in some indications of a building along with some barbed wire.

At this stage I figured that the building could be a kind of prison. I was partly inspired by the movie From Hell, which is set in Victorian London. 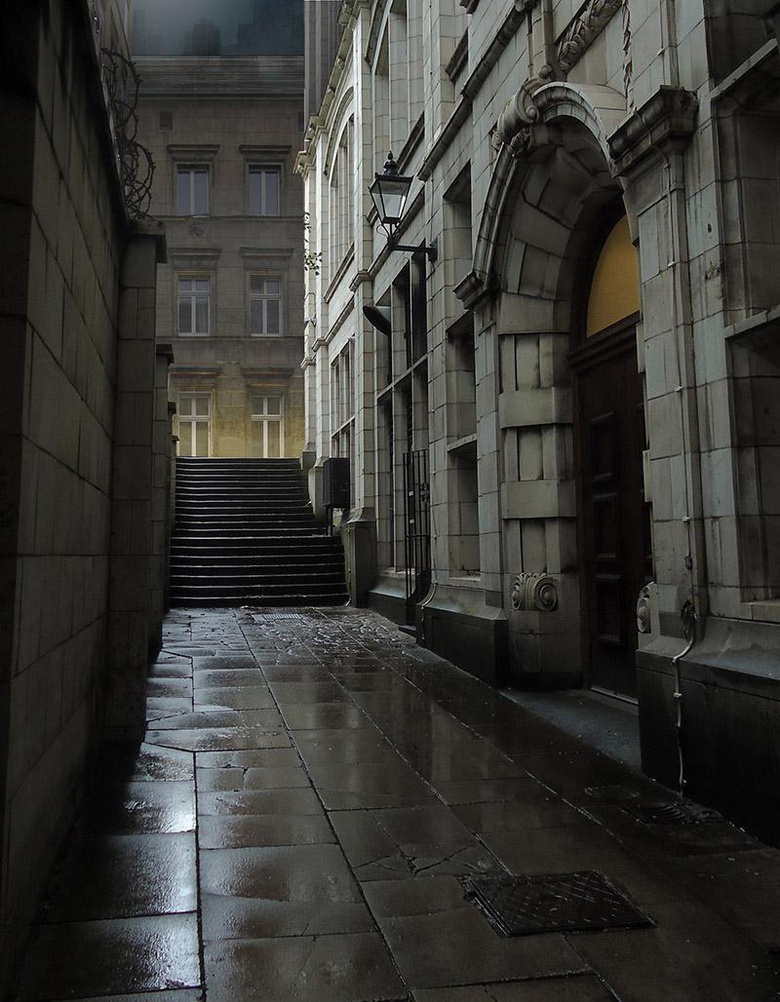 In Photoshop I have a folder containing adjustment layers to bring the contrast and lightness down, and adjust the color balance into a more night-time palette of blues and greens. I exaggerated the greens to give it an eerie look. I also painted in some lamp light which will be the main light source, apart from the doorway in the following steps.

To keep reflections consistent I also mirrored various parts of the scene and motion-blurred them. It's worth noting that I wanted to keep some aspects of the painting loose, so some parts might show brush work and intentional imperfections. 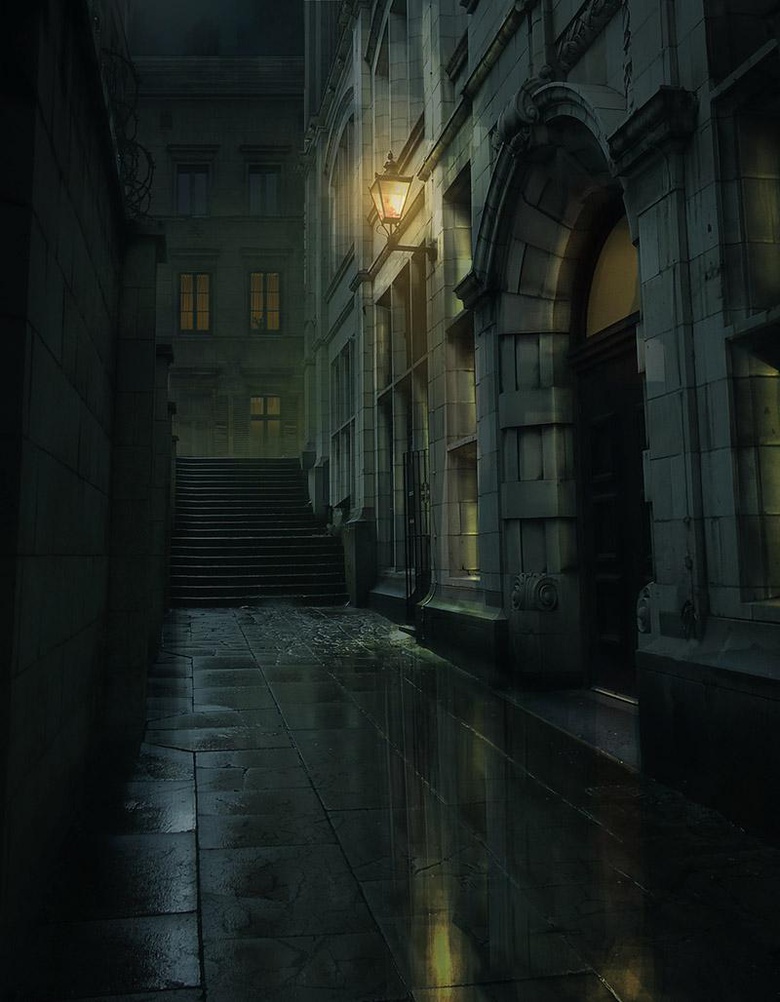 Painting in the details

If you notice here I added back in the archway that was in the original photo, which brings our eye down. I also added the open doorway for some light-play and to add some mystery, and make the audience wonder what's going on beyond. Actually, the other inspiration for this piece and the direction it took was the movie The Elephant Man.

I wondered if this could be a prison for the criminally insane, so I added bars to the window near us and the wrought iron gate. There were various grungy textures placed over the brick-work to make it look, ironically, older than in the present day photo! 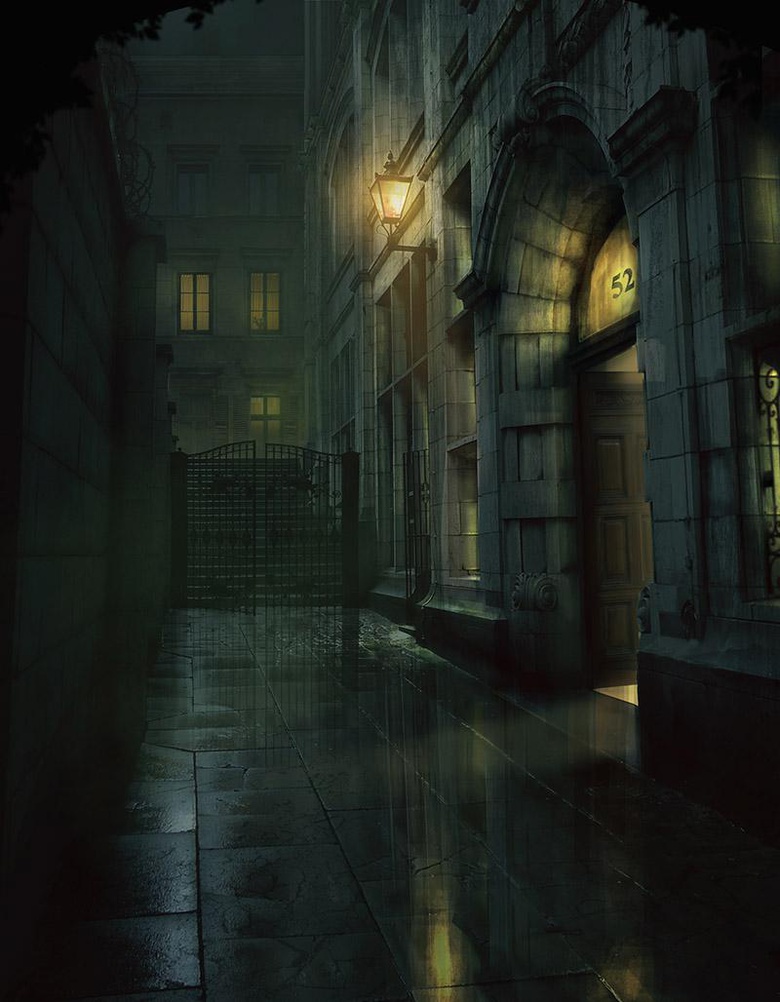 This is the fun part? getting into the muck and grime of the period to make the image more authentic

The original image is a little bare, so I decided to add some bits of debris, old newspapers, garbage, planks of wood etc. I also added some ivy which gives it a kind of cemetery feel, what with the old stone and wrought iron.

I felt it also necessary to add some falling rain for extra mood. This was done by using a dotty sort of brush and then adding motion blur. I also made a custom brush for the rain splashes, which I stamped down, duplicated the layer, then slightly blurred and shifted it over a pixel or two to give it some motion. 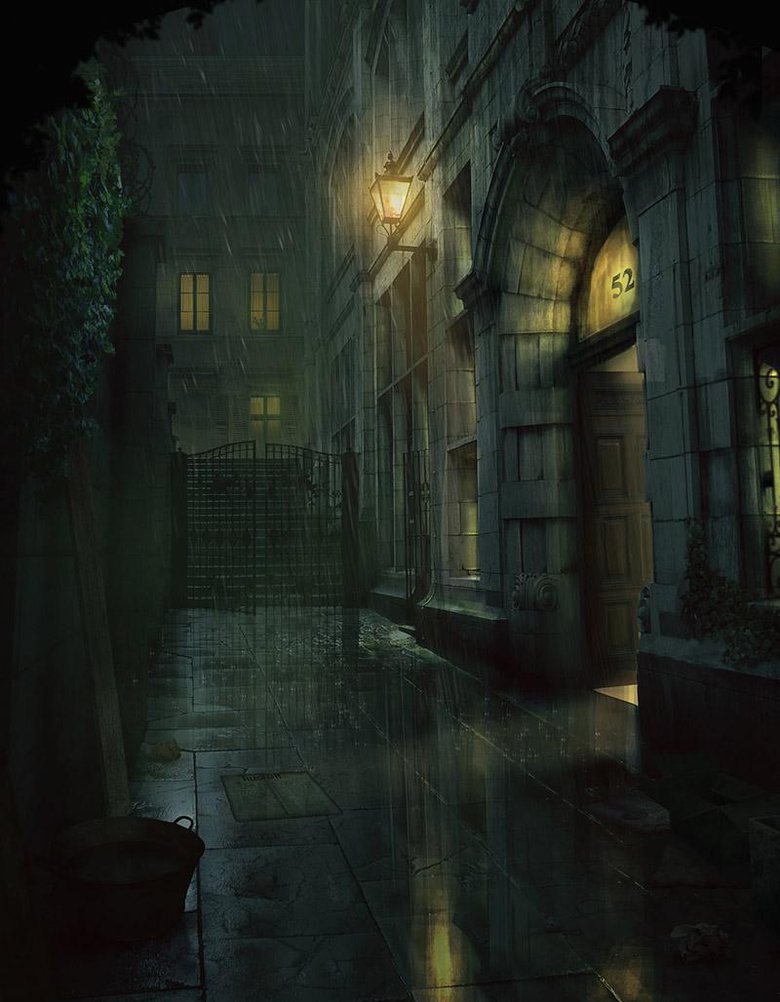 I added some bits and pieces to make it looked lived in, plus a few atmospheric tricks

If you look between steps 3 and 4 you'll see that the shadows become more vivid. This is something that most people neglect and they tend to make their shadows very dark and desaturated, which can make a piece look somewhat muddy. To achieve this I simply made a new layer, filled it with a dark burgundy, set it to Lighten and dropped the opacity of it down to 65%.

For pieces like this, I think it's necessary to keep a lot of layers and to keep everything separate. This is so you can come back to it and tweak where necessary? something I had done a few times. I have my document set up so that, by removing enough layers/layer folders, you can revert back to the original image. This gives a great amount of control, but you have to be organized or you'll get lost easily!