Making Of 'Under the Root, My Kingdom'

by Olivier Heban as "Myrrdhim"

To put this piece into context, I should talk about the story in which the scene appears. The story is from "Nausicaa and the Old Tree", a children's tale which has a sad mood and a very tough ending for the little girl, Nausicaa (but don't worry, there is hope for her). The illustration is of the only lit scene in the story; a sweet afternoon at the beginning of summer. We see Nausicaa seated under a huge root of "Vieille Branche" (the name of the old tree), on a flower bed, sun-kissed by a beautiful, golden atmosphere. By the way, Vieille Branche is a speaking tree and, in this scene, it's the last time Nausicaa sees him before he is crushed by heavy machinery. Before I go any further, I would like to add something about the necessity of this story. I'm a person who is unable to draw or paint without a story. I believe this is a problem, and I have resolved it by deciding to write my own stories. I feel that this way, an illustration can be given a soul and a reason, but it cannot be fully appreciated without being placed in its context. Now, we can go to discuss the preparations made for the piece...

I never work directly on my computer. I start by drawing a first, rough version out with my old traditional pencil onto paper (yes, it still exists) A first rough version (Fig.01), and then continue to finely detail the sketch with full texture and lighting (Fig.02). I know that this way seems to be a very long way to prepare, but I work this way because I love to draw - much more than painting, in fact. I then scanned the drawing and took it into Photoshop, using the "Photomerge" option to recompose the original drawing, working very largely at 34cm x 43cm. After that, I exported the image into Corel Painter IX.5 - my main digital tool. 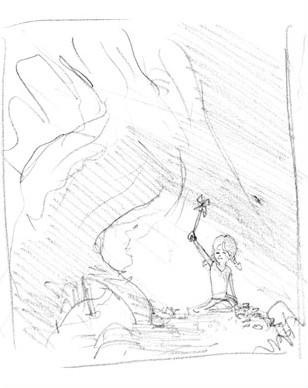 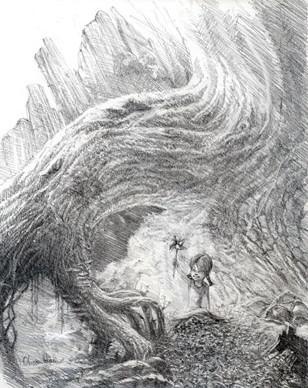 I know that Painter is not the most popular software for digital painting, but I haven't found an equivalent for the tools that I like to use, with those in Photoshop. I used the following tools; Round Oil Pastel, Digital Airbrush, Variable Splatter (airbrush), Soft Flat Oil, Just Add Water (blender), Grainy Blender, and Glow Effect (see palette-pic). I also used the Sidewalk Texture paper. My specifications for the Round Oil Pastel were Grain: 63%, Resat: 100, and Bleed: 13%.

(Fig.03-05) What I love about Photomerge, in Photoshop, is the way it places the recomposed drawing directly onto a new layer. I set the layer to Multiply and started filling in the canvas using the Paint Bucket tool. I chose to work with a golden, brown colour to fit in with the story and the filtered mood of the forest. I also added a green tone, and that was all for the colours. 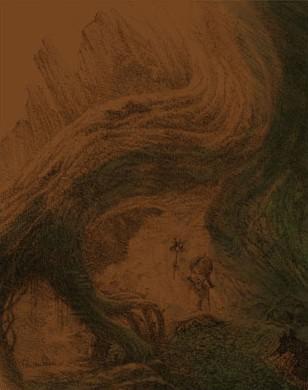 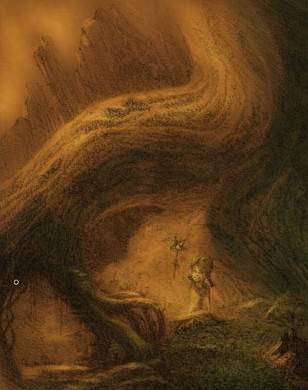 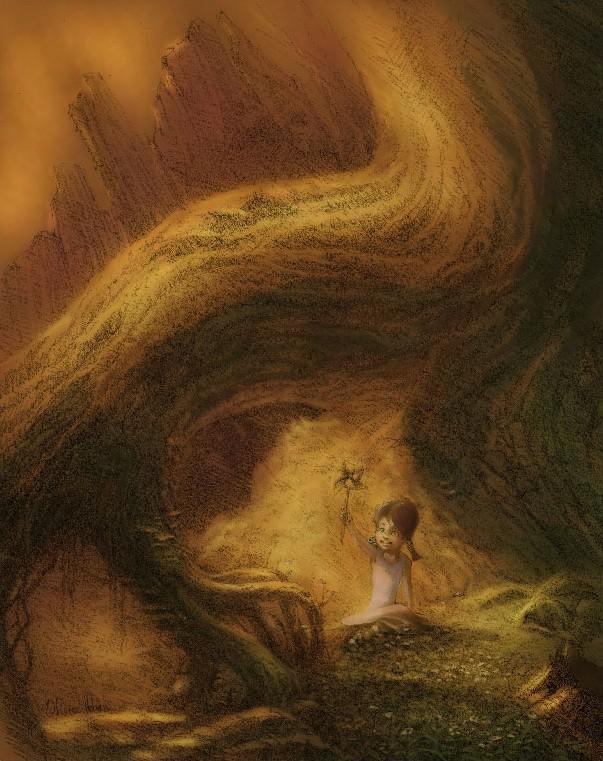 In Painter, I used a Ryan Chuch method, so I don't want to imply that it was my own technique. It was very simple to do and even used a lot of my system resources as my picture was large (Fig.07- 11).

1: Firstly, I dropped all of the layers (Layers / Drop all).
2: I then duplicated the canvas (Ctrl + A / Ctrl + C / Edit > Paste).
3: I selected the Glow tool (in the Effects category) and then selected the colour (I highly suggest using a dark colour here).
4: I then set the tool as wide as I could, using it at its maximum. Then it was time to spread the light from the light source out to the darkest areas. Don't worry if the tool paints over your shadows.
5: I then selected the Eraser and erased the light from the shadowed zones that I didn't need. As I did this, I revealed the canvas and the original colours, without the Glow effect.
6: I could then add some interesting light reflections with the Glow effect, onto local areas, working with the Eraser again (and also playing with the opacity, too).
7: When I was ready, I dropped my layer, and my computer was happy.
8: The operation could then be repeated as much as was needed by selecting a particular region of the painting and pasting it into place. At every moment, I was able to play with the opacity of the layer to judge whether the light was too strong. 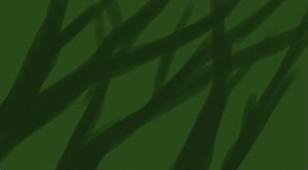 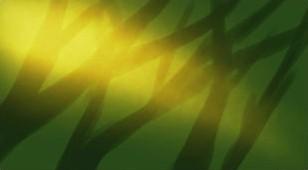 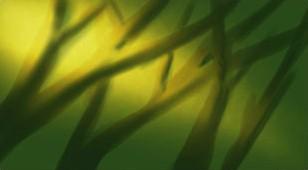 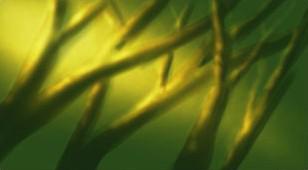 When it came to adding all of the details, all of my layers were dropped. I decided to blend the colours with the drawing on different areas. My own way of working can be very chaotic. I started with the bark, went on to the flowers, went back to the bark, detailed Nausicaa's face, worked on the flowers again, and so on. I also worked a lot with the contrast, too. The best way to explain my method is to give you some examples, depending on the subject I was working on.

For the bark, my first intention was to mix the drawing with the colours. Still in Painter, I added water to smooth the hard strokes of the pencil first, and then detailed it with the Grainy Blender, which allowed me to give movement to my brush strokes. I didn't blend everything that I could see, instead I used a very instinctive method, and no references. I chose to forget small parts of the original drawing on my painting. I have discovered over time that as many bark varieties exist as skin tones, so I decided to keep the shadows and highlights created by my mix and improvised everything else. I advise you to find as many photographic references as possible, and also check out Alan Lee's work on trees - they are mostly sketches, but he's a great master with trees, mushrooms and creepers. You will realise that it's possible to do just about everything with bark.

In Painter, I went on to create a new layer, which allowed me to add some heavy colours over my mix with a digital airbrush. I dropped it again and worked with my new colours, with a soft flat oil brush. As you can see, I tried to render the light reflection on the bark, depending upon the intensity of the light: bright colours on top and reflected lights ones under the root. I used many layers for each colour (because there are many colours on natural trees too), and I eventually dropped them and began reworking with textured brushes. You can also add interesting details with the Variable Splatter tool, to add tiny spots over the existing texture. 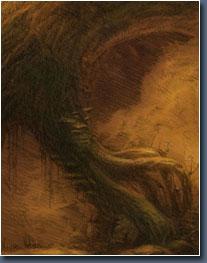 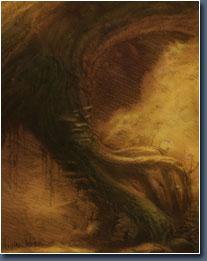 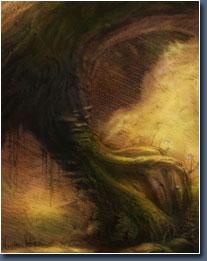 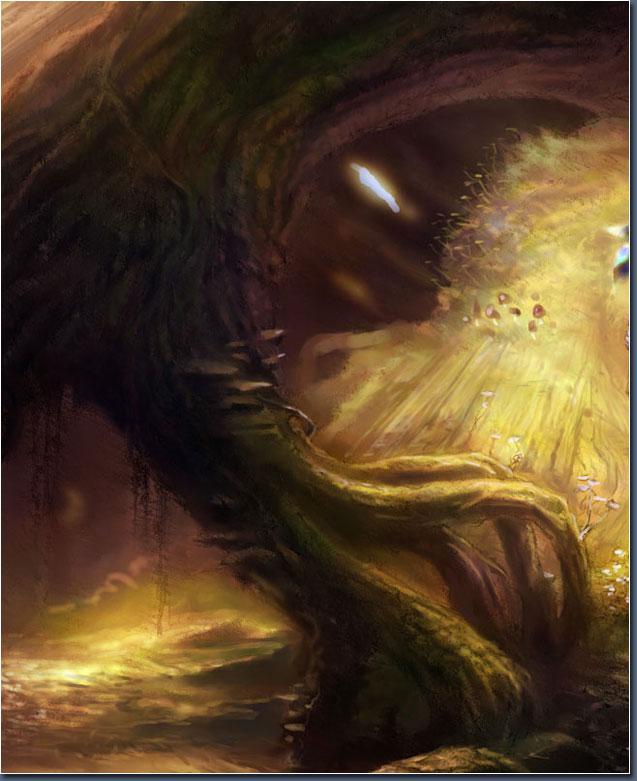 This method was similar to the previous bark one (Fig. 15-18). I used my previous layers to add some green, and then dropped it, filling in the leaves and petals with blended greens and a variety of broken whites. Because the light is an orange-gold, I reflected it upon the green too - using the Round Oil Pastel brush for this work. Even though I mainly used a green colour, I added some burnt pink and orange close to the roots. I wasn't too interested in copying existing flowers and leaves, I just wanted to fill the empty space with lots of elements. 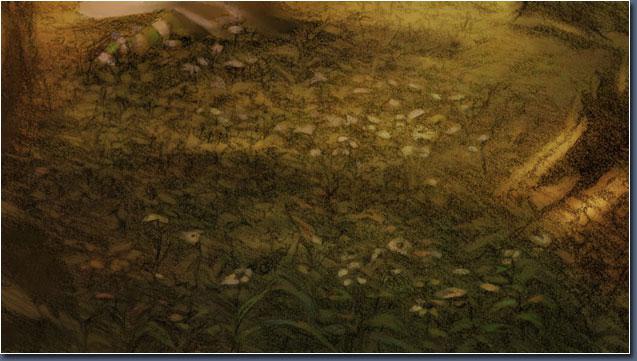 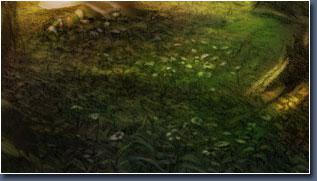 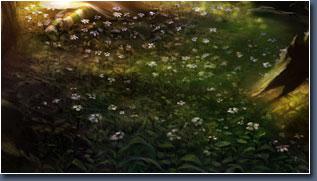 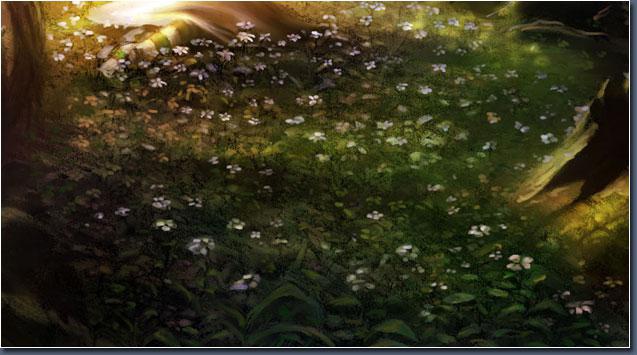 (Fig. 19-22) For the little girl, I used the same approach as with the others elements: I firstly blended the pencil with the colours and added more colours and lighting afterwards. I decided to give up details and worked on saturated and diffused light on her dress. I used the previous method with the Glow tool and a selection around the body. I highlighted the dress and erased the excess from around her. After that, I dropped the layer again. I uses cool tones on the shadows and completed her with highlights on her hair. For the face, as I'm not an expert, I found this to be one of my weaknesses with this piece. I decided upon using a non-realistic style, which I feel works best with the style of the book. I tried to render the lighting as best as I could, which I think is not too bad. 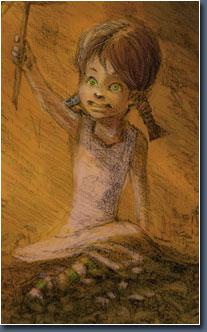 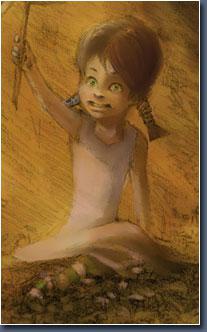 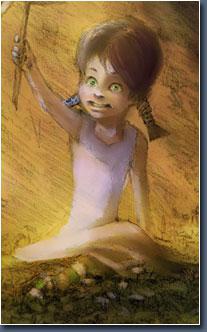 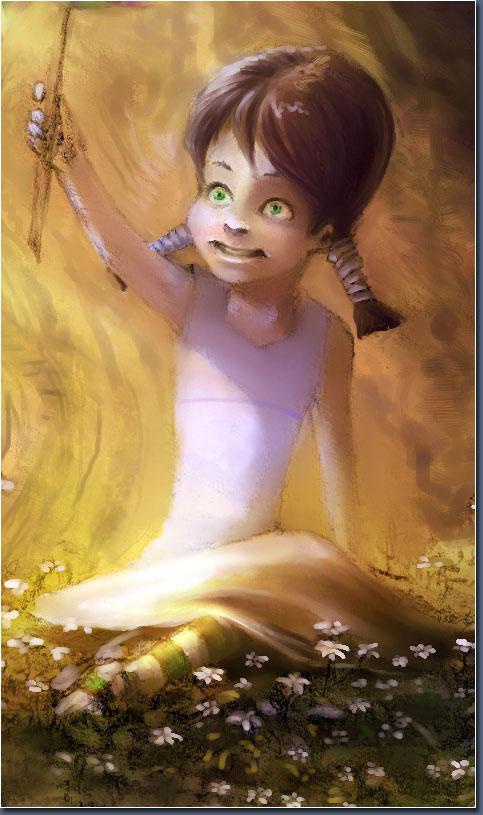 (Fig.23-25) For the windmill, I firstly painted it in black and white, then created a new layer and I added shadows with a purple tone. Finally, I create a third layer and I added the final, and more unnatural, colours. I highlighted it with a broken white, but not to much because the general mood is quite soft. 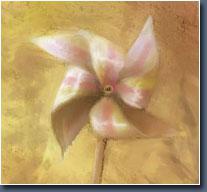 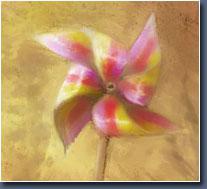 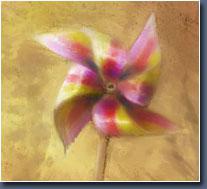 Once the detailing stages were done, I decided to crop the original because I didn't feel the closeness that the text evokes in this scene. I replaced Nausicaa close to the centre of the scene and closed the top by the massive root. The light now comes in from the holes in the bark in the background, and I again used my Glow tool to overexpose it. And then the image was complete.

I hope that this little step-by-step will be of some help to you. I know that it's not a killer in terms of its techniques, but it's my own way of painting: very free and natural. This is why I chose Painter over Photoshop. Thank you for reading. 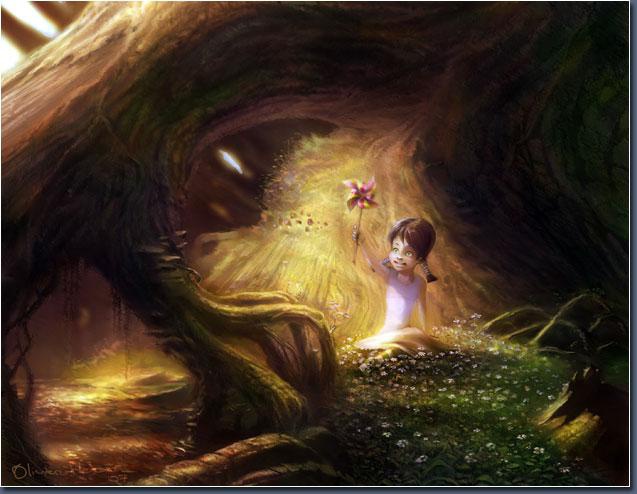