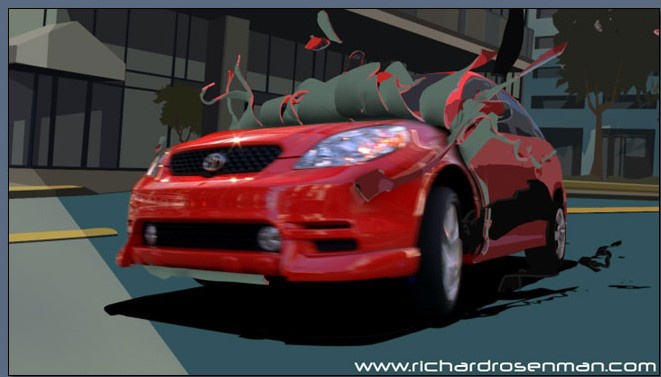 This is an extended section containing more detailed information regarding the production of the Toyota Matrix commercial. Since I am specifically involved in the 3D digital animation industry, this section goes into further explanation of the 3D aspect of the spot, primarily the 3-shot sequence of the animation peeling off of the vehicle. In the following article, the 'digital effect' refers to the 3D component of the spot, primarily what I just mentioned -- the sequence in which the animation peels off of the vehicle. The 'digital treatment' refers to the compositing work involved in creating the look of the entire spot.

Toyota Matrix production began in November, 2001. At this point, it was only in conceptual stages and Saatchi and Saatchi, the advertising firm holding the Toyota account, had just begun pitching the job to production houses in order to see who would be interested and capable of achieving the treatment and producing the digital effects. We at Redrover decided to put together a test to demonstrate what we wanted and what we could do; as a result of the agency liking our proposal, the spot was awarded to us in late November. The basic premise of the spot was to portray an animated car which accelerates so quickly, in its animated environment, that the animation can't keep up and peels off of the vehicle to reveal the real car. We then see our beauty shots of the car, followed by a dramatic skid at the end during which the animation catches back up to the car, and we see it transform back into its animated counterpart.

There was a considerable amount of testing of different approaches in order to create the peeling effect of the car, from hand-keyed animation, to quasi-dynamics simulation systems, to full dynamics rule-based simulations. In the end, it was decided that the most efficient and convincing approach would be to use the dynamically-driven Simcloth cloth simulation plugin from Chaos Group, since it was established that the peeling animation would behave like torn cloth unsticking itself from the frame of the car. During this time, Brad Husband, the compositor, also began creating different treatment tests using various digital tools and techniques in order to see which would best suit the spot.

The spot was scheduled for shoot in mid-December in Tampa Bay, Florida. Brad Husband and I attended the shoot to supervise, and make sure that there weren't any complications related to the digital effects. The shoot took a total of three full days, and was directed by Sean Thompson. It was shot mainly throughout downtown Tampa as well as Ibor City, in streets, bridges and parking lots. During the shoot, animator Mike Oliver began creating a 3D model of the car back at Redrover from reference photographic material, which had been provided to us by Saatchi and Saatchi. Although the original CAD model of the vehicle was available at Toyota, there was no chance of getting a copy of it due to disclosure and secrecy issues. A model of the car would be required to act as an obstacle object under the mesh of the 3D car so that the pieces would only 'lift' off of the car and not blow inwards or downwards. The reference material consisted of front, left, right, and 3/4 photographs of the Toyota Matrix, shot with varying lens sizes. Additional angles of the vehicle, such as above and back, were shot by us during the shoot. We used the reference photos with minimal lens distortion to model the car.

In early January, we supervised the edit to make sure that we had the 3 most ideal shots of the car for the animated effect. We made sure to choose the first shot showing the front of the car, the second shot showing the entire top side, and the third shot showing the back of the car, thus having a beginning, middle, and end shot with which to reveal the car. We also made sure that the shots were very dynamic, as these series of shots were arguably the most important ones in the spot. Once the edit was completed and approved by the agency as well as the client, it was sent to Toybox for the film to file transfer, which provided us with high-resolution SGI files with which to work. 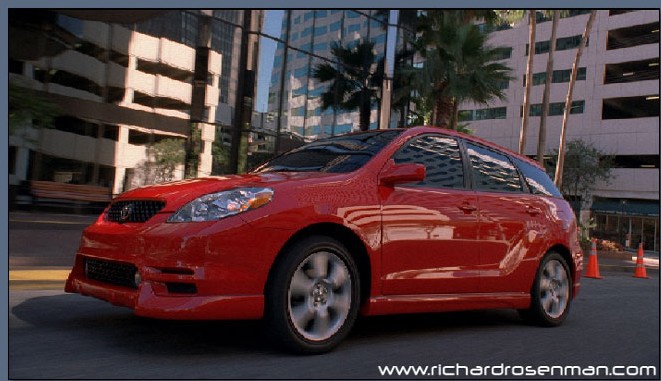 As soon as we got the footage loaded into our systems, tracking began on all of the shots which required it. These shots not only consisted of the peeling effect, but also most of the treated shots, since hand-painted mattes would have to be created and tracked to the footage, mainly for the digital treatment. Tracking for the peeling effect involved setting up the virtual camera in the 3D software to match the correct perspective, tilt, dutch, FOV, and lens size of the live-action camera, and
then animating the 3D model of the car to perfectly match the motion of the real car. Tracking this had to be dead on because even though the animated car would most often be in an animated environment, the revealed real car underneath it would have to match the animated one precisely, in order for the illusion of the paint peeling off to work. In addition, because this was to be shown on cinema screens, the margin for tracking errors dropped significantly as any slipping would be much more noticeable on the big screen. Tracking the peeling shots lasted about 1 week in total between 3 animators.

Once tracking had been completed, the next step was to set up the 3D car for the simulation. In order to do this, the vehicle needed to be cut up into small pieces that would later be pulled off by the wind. Otherwise, the entire mesh of the car would fly off like one big blanket. This was a crucial step because the method in which we cut the mesh would dictate the method in which it would peel off. For example, too many small pieces would make the effect look like particles of dust were peeling from the car while too many large pieces would look like panels of the car were falling off. The solution was to create thin
but somewhat long pieces which had the appearance of a torn edge at the front, and would therefore appear to have 'ripped' off of the car. A mix of both smaller and larger pieces were also created to introduce some, but not too much, chaos. Since this procedure would be very time consuming, and we would only have the opportunity to do it once, we first printed a 3/4 view of the car and drew on top our intended cut lines, so that we could get approval on this from the agency. 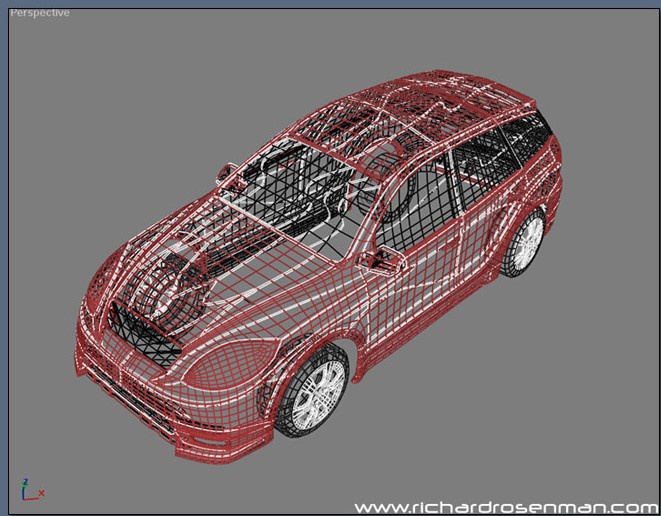 Once we were ready, each already tracked scene was set up with dynamic forces such as gravity, wind, damping, bombs, vortexes, etc, in accordance to what was happening in the corresponding live action scene. For example, in the first shot of the car peel, the vehicle makes a hard swerve to the left. In order to simulate the inertia of the cloth being thrown to the
side, we had to animate a wind force moving from the front of the car to the left side. This effect, along with the already simulated inertia created by Simcloth, helped to emphasize the motion of the pieces as being integrated in the live footage. In another instance, we needed the peel effect to burst off rather quickly in the first of the three shots. Since there was too much friction between the car, the air, and the cloth, it was taking a half second before it would begin to lift. Therefore, we set up a bomb force, located on the front bumper of the car, which helped push the animated tears off of the car in a faster, more dramatic fashion. 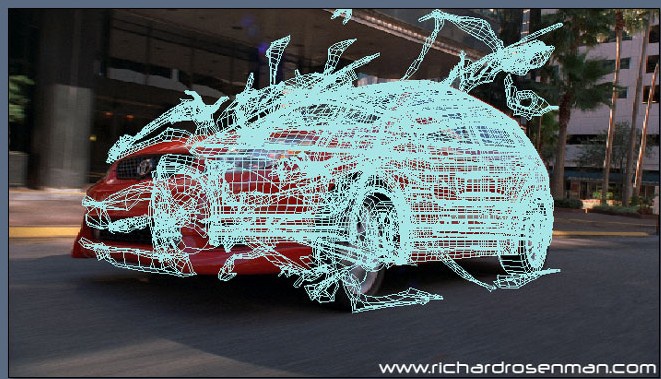 The simulations took on average about 30 minutes each to calculate. This may not seem like a very long time, but since an innumerable number of tests had to be conducted to get a satisfactory motion, we had to have many computers working at the same time, each solving a different simulation, with varying settings. Integrity errors became another problem as many of our initial tests continued to crash. Upon cleaning up the mesh a little more, running STL checks, and tweaking the forces a little longer, the errors disappeared. Yet another problem occurred when we liked one simulation and the motion it created, but we wanted to push one of the pieces a little more in another direction, since changing a variable ever so slightly would create a completely different result the next time. Therefore, we didn't have much control over changing the simulation we ended up with, but rather a lot of control over creating it. 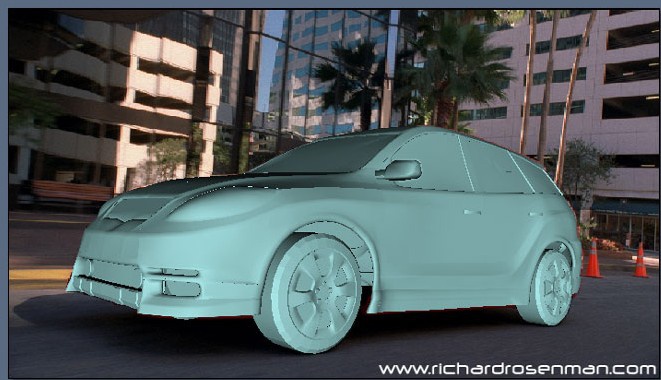 Once we had simulations we were pleased with, we had to texture map the animated mesh with the treatment Brad had come up with. This originally seemed like it would be a major ordeal because fully texture mapping the entire car, with animated textures for only 3 shots would have required an immense amount of time. Therefore we looked into other alternatives. Luckily, we realized that we could actually 'camera map' the first shot of the peeling sequence with a still of the first frame of the treated footage, and get away with it, since we never saw any other angles of the car except the front in that particular shot. 'Camera Mapping' refers to mapping an object with a texture projected from the view of the camera. Since the motion and staging of our 3D car matches that of the live action, and the movement the real car makes is not a drastic change in perspective, it is therefore possible to use the original shot as a texture. Also, since we don't ever see the other side, or back end, of the car for which the texture doesn't exist, this is once again an ideal situation for camera mapping. For the second shot of the top view of the car, we simply had to use the first frame of the treated scene as a texure as well, without any problems since it is a direct overhead shot without any significant perspective change. Finally, for the third shot, we could once again use a camera map because even though there is a severe change in perspective, the pieces have almost all but peeled off by the time the car begins to turn. The other thing to mention is that the underside of the mesh
was textured with a much darker tone in order to create a definitive contrast between the outer and inner part of the texture. 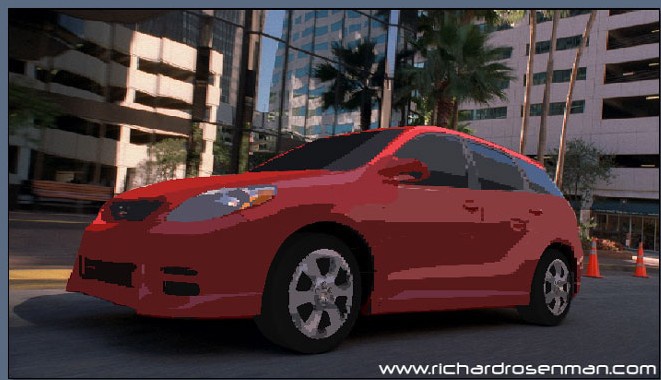 Finally, the lighting and rendering phase began (although there was no lighting involved since everything was rendered with self illumination in order to maintain Brad's treatment). Rendering was broken up into numerous layers such as background, foreground, shadows, etc, in order to give the compositor additional control over color correction, which proved to be useful during the online session with the agency. In addition, a GI pass was created to simulate the shadows that should appear where the peeling texture makes contact with the real car. Everything was re-rendered at the original resolution at which we received the files and, despite the high resolution involved, renders were fast as a result of zero lights and reasonable
polycount.

The final spot was composited using Combustion, and then sent back to Toybox for dumping back to film. There were several transfer tests done first, since there sometimes tends to be dramatic changes in color going from file to film. The final 61 second spot began airing in Canadian theatres in March, 2002. There is also a 30 second version airing on Canadian
and American television networks. 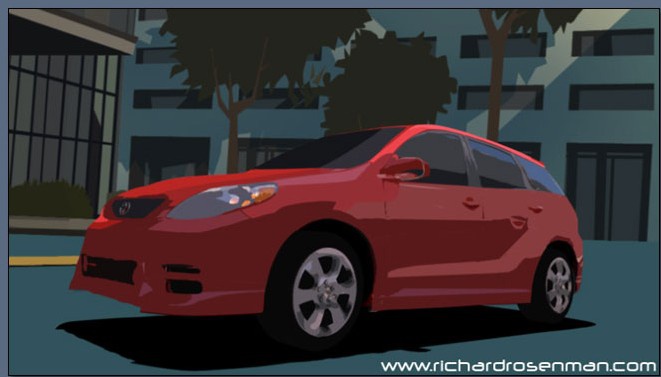 The software used to create "Toyota Matrix" was 3dsmax, Simcloth, US Animation, Flash, After Effects, and Combustion. 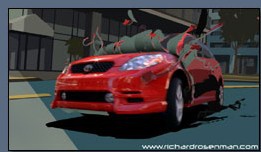 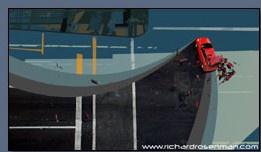 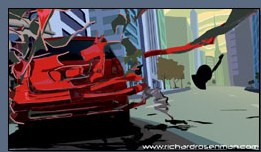 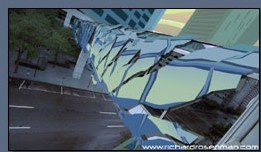