Making Of 'There is always a bigger rat' 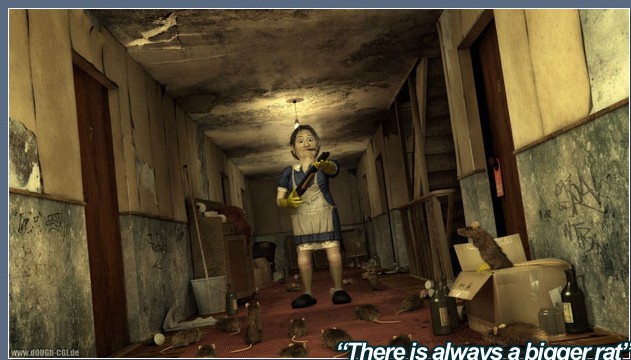 This scene was made using Lightwave for modeling and rendering, Photoshop was used for the Textures and post work.

A picture of a hotel-corridor was something I wanted to do for quite some time. Characters should be in that scene too, but I had no Idea what kind of characters, or even what they were supposed to do in this scene.

As I was sure about the appearance of the corridor I started modeling - so the character-problem had a little more time.
Modeling of the corridor, the furniture and the trash was quite easy, even though time consuming. The corridor itself is a simple form extruded from a basic plane. The wooden floor consists of 40 cloned boxes. Simple boxes are forming the furniture, too. The wallpaper is a sub patched plane. Some points were unwelded to make cracks and holes in the mesh. The edges are a little emerged to make it look as if the wallpaper is going to fall of the walls soon. The wallpaper-planes were placed in different heights all over the corridor walls. Polygons were moved or deleted to make it look irregular. The cardboard boxes where made by beveling a box to the final shape. All the trash-objects are simple. Bottles, cans, glasses were all made by simple forms and the use of the lathe tool. 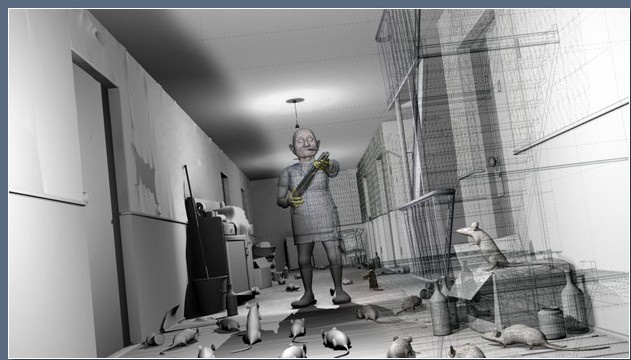 I wanted to use the Total-Textures CDs for the image, especially the dirt & graffiti CD. After a few minutes of searching the CDs content, I already had most of the basic Textures and dirt maps. Seamless texture maps are a great thing, especially when you don't want to spend much time on texturing. So most of the Textures were taken directly in the image - just changed colour and contrast to what I wanted. Some procedural Textures were added to make it look a little dirty. The Textures of the main corridor-walls were made through the use of the dirt maps from the CDs - mixed together in Photoshop with some of my own textures from photos I took, and some of the clean textures. The final Textures were repeating very obvious, which wasn't important, because of the lighting (many shadows) and the objects in front of the walls. 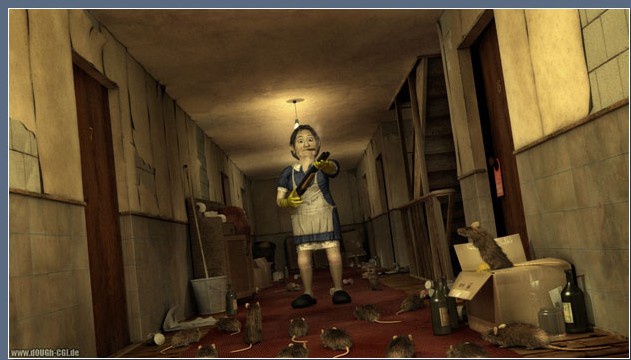 As time went by, I had no time to make a fully new character - so I used a model of a thin old man I made half a year ago. The existing 3D Model was stretched with the magnet tool to an old, fat and ugly lady. I thought it would be funny to place a cleaning Lady in that mess of the corridor so I put her in some kind of cleaning outfit. But since it is really dirty, she would have to use something very powerful for cleaning - a shotgun. After all she has to deal with a whole bunch of rats, and who knows what else. Texturing of the lady was quite easy. The attention in the image is on her, but she is only a small part in the image, so it was not necessary to makethe textures very perfect. The rats were modeled poly by poly - creating all polygons by selecting thecorresponding points by hand. The result was a low-poly model, which was subpatch. The rats had no Texture at all. Sasquatch was used for most of the fur. 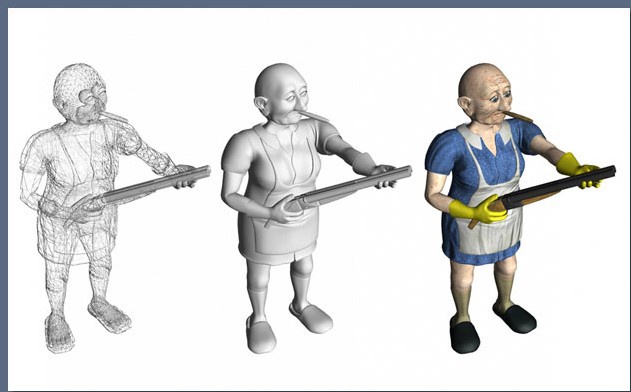 3 lights were used for the lamps on the ceiling, 2 for lights from other sources. Setting the lights up was very difficult, even with so less lights. After hours of playing with different settings and intensities, I started the render with radiosity enabled.
After 26 hours of rendering it was time for the post work in Photoshop. I painted more fur for the rats, hair (with a cheap tablet) and the underskirt of the lady and placed even more of the dirt & graffiti images onto the walls and ceiling to make the image look even dirtier.

It was great fun to work with these great Total Textures CDs. I am sure to use them very often in future projects because it is very easy to get realistic looking Materials in a short amount of time.

That's it. I hope this piece of text is of interest for anyone.