Making Of 'The Worm'

This scene was created using Cinema 4D and was done as follows. Please note that the models shown are not the models in the final render. I didn't know I would be making a tutorial for this when creating it: 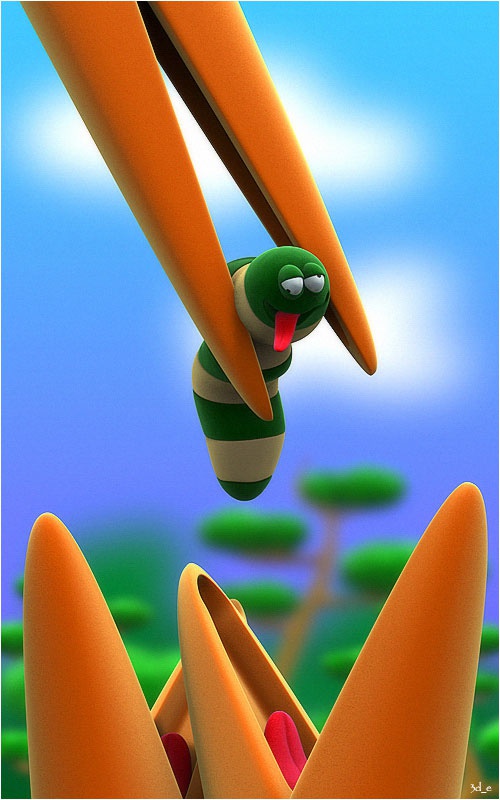 The eyes are just modified spheres. I place a sphere in the scene, changed the segments to 24 and then made it editable. I then selected the polygons I wanted to represent the eyeball part, extruded those polygons in until it looked right and then enlarged the extruded polygons slightly until they looked like they were tucked under the eyelids. Then to smooth it all out, I placed it in a hypernurbs object. I then added another sphere to represent the pupils. 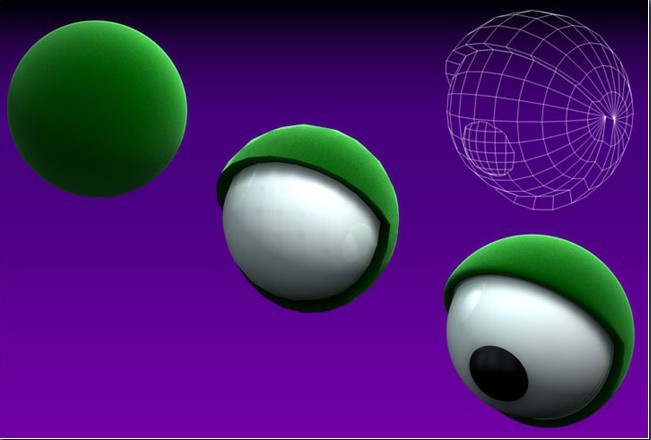 Once I was happy with the way it looked, I grouped the two objects and duplicated it for the other eye and moved it into place. I kept in mind while modelling the parts the different materials I wanted to use for each part of the worm. This is done by selecting polygons and assigning selection tags to those parts. You can then apply different materials to just those selections by assigning materials to them. 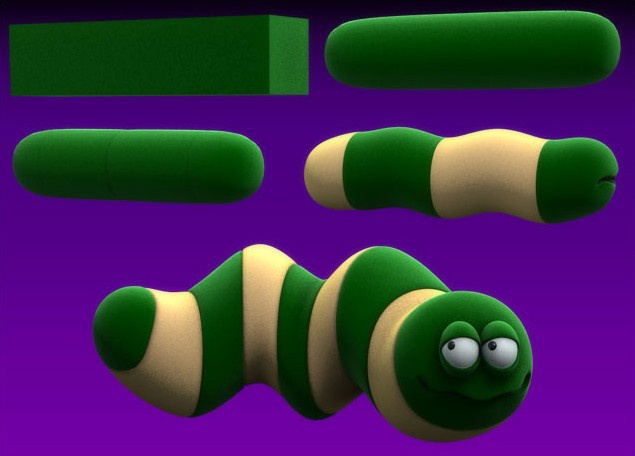 The worm is also a modified cube. Once again. I added another cube, made it editable and then elongated it. I then made several cuts in the geometry which will eventually become the different segments of the worm. Once I had the basic shape right, I then selected the segments one at a time and extruded them slightly. Next, I selected every other row of points and moved them up slightly to give it a more irregular appearance. Next I placed the geometry in a hypernurb-object to smooth it out and subdived it with hypernurbs checked. For the mouth, I selected the polygons which I wanted to represent the mouth and extruded them inward. Next it was just a matter of moving the points around to give it a more irregular appearance. The tongue was a cube that I shifted points around until it looked like a tongue. :) After I placed the eyes, I grouped all the objects and applied a bend deformer to make it look like gravity was pulling on it as it was hanging in the beak.

All the beaks are duplicated with modified dimensions to make them appear different. They were made by placing a cube in the scene. I then made it editable. From here, it is just a matter of moving points around until you get the basic beak shape. This will require a couple cuts in the geometry which I have illustrated. Next I placed the beometry in a hypernurbs object to smooth it. To create the depression on the inside of the beak, I selected the polygons on the bottom, inner-extruded them in slightly and then extruded them inward. I then selected the beak, duplicated it and rotated it 180 degrees and moved it into place. 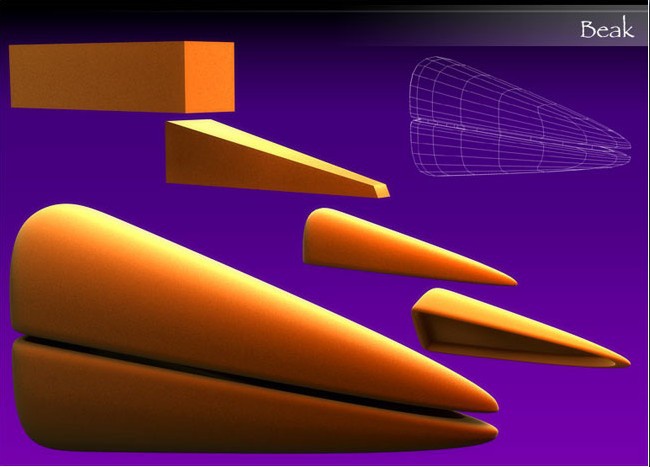 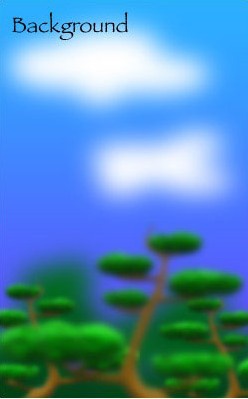 This was very easy. I created a photoshop file with dimensions of the final render. I then drew the background with simple colors, added some trees from an older render and blurred the heck out of it. No need for lots of detail here. Simple as that. Next, I placed a background object into the Cinema4D file and applied a material that I had assigned the photoshop background to in the color channel.
Â
Lighting

The lighting for the scene was achieved by using a "light dome" for the GI and a spot for the key light. The "dome" was done using a plug-in called Di-Tools. I placed a sphere in the scene and enlarged it greatly so it encompased the whole scene, I changed the segments to 24 and made it editable. I then added a low level omni light (about 2%) with a value of 5% cyan for a nice atmosphere and soft shadows. 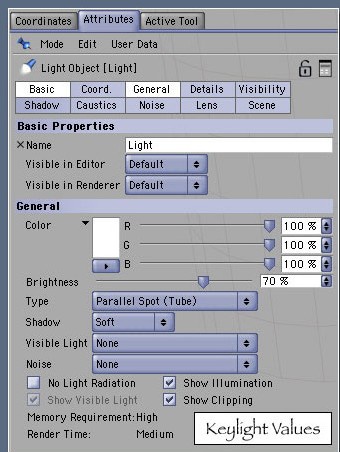 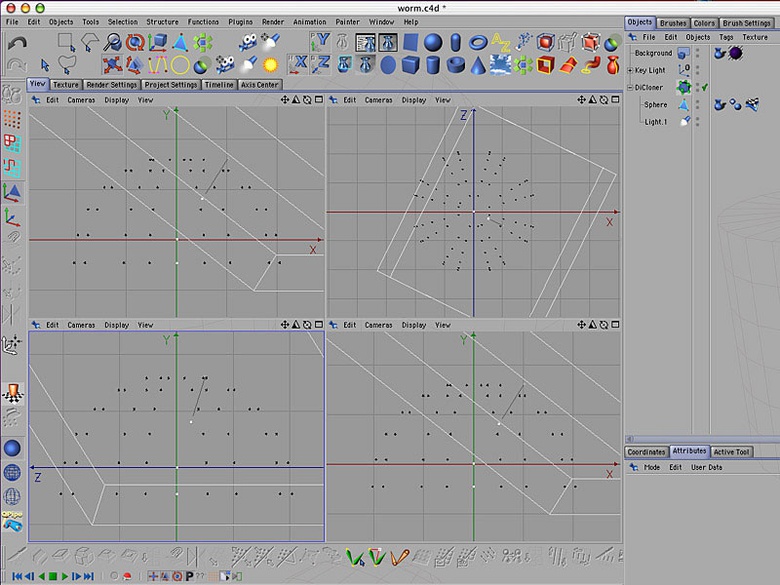 Next, since the bottom part of the dome contributes very little to the lighting of the scene and the fewer lights, the faster the render, I deleted the bottom points of the sphere. Next, I added the spotlight and adjusted it until I was happy with the placement. I assigned a 100% light blue value to the light and gave it soft shadows also.

All the materials used in this scene are a variation of the same scenario. They are very basic and done as follows: For the color value, I used SLA fresnel. I then edited the fresnel values by giving the 2 color values different shades of the same color. I also added a very slight 3D noise value in the bump channel. Simple as that. 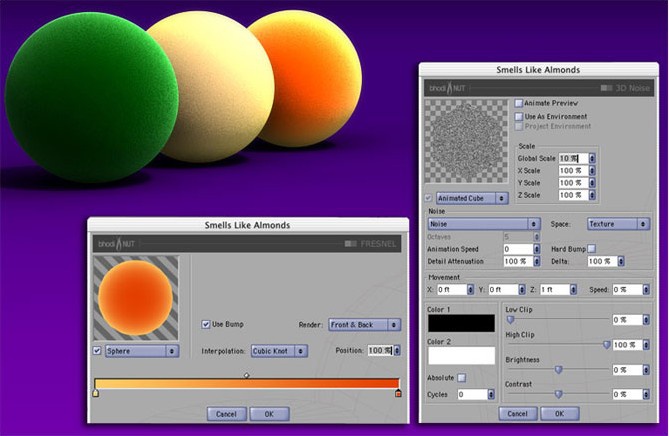 I hope that you find this tutorial useful and believe that these techniques can be applied to other 3D packages. If you are interested in seeing any of my other renders, please visit my gallery at Renderosity. I haven't my own website yet but have plans to do so. It can be seen here.