Making Of 'The Warehouse'

The guys at 3DTotal.com recently asked me to write a Making Of my "Warehouse" image that recently won an Excellence Award in their Concept Art category. So, here it is. This image was not created for a commercial job, but was more of a concept sketch I made as a practice in a single day. I just wanted to try a composition consisting of both photography and aÂ painted element. IÂ knew from the beginning that I wanted to mix a real environment with painted humanoid creatures.

I took a warehouse image made byMiles Pfefferleas the base because I like the mood of industrial environments. Searching for the best reference IÂ picked this one out because of the nice lighting and interesting "through the window" point of view (Fig.01). 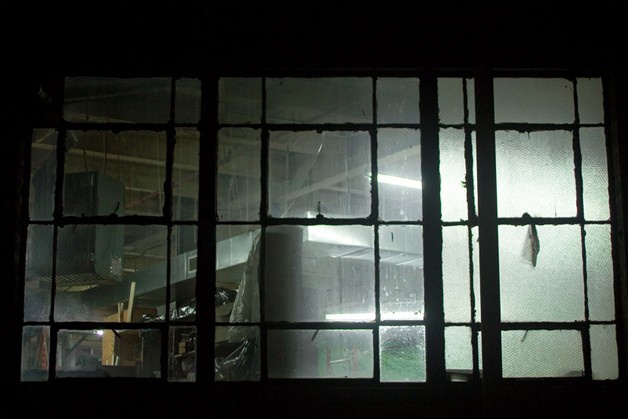 Another thing IÂ knew before starting this piece was that IÂ wanted to use a cinematographic 2,39:1 aspect ratio (often wrongly interpreted as 2,35:1). This choice would give me the film screen capture look I was going for and which IÂ could then use in my future film project as a reference. So I comped Miles's photography to the appropriate format in Photoshop and made some light corrections with ImageAdjustments> Levels.

I emphasized the mysterious atmosphere of the view by covering some of the side windows with a black layer. This way I got the isolated space for future character, but the black areas were still part of the building, although they have no visual information (Fig.02).

Next IÂ moved the image to Corel Painter. This was because I prefer to paint inPainter as I have a traditional painting background and I've found the workflow in this software to be more intuitive. On the other hand, the work with layers and various masking effects is more comfortable and clear inPhotoshop, so IÂ tend to use the best of both.

After several rough tryouts the final line art of the creature was made. IÂ wasn't too bothered about details and carefully thought-out anatomy at this stage since it was only meant to be a fast practice (Fig.03).

I split the character into two parts: the first one behind the pure glass and the second behind the structured glass. The body was formed with the Oilbrush at the beginning. With a help of theDropper tool I sampled the whole environment to get the base color palette for the creature while making sure that some part of the original structure of the glass plates and light was kept. The job on this part was finished with a touch of warm tones to the skin and a rim light created by Screenlayer modewith 20% opacity (Fig.04). 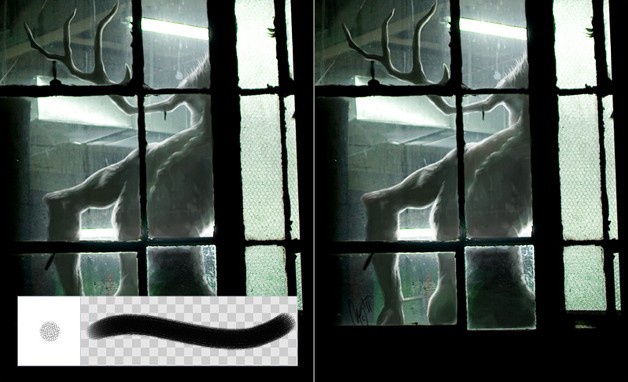 The part behind the structured glass was also formed with theOil brushand the Dropper tool for color sampling. A good reference to help observe light behavior in this area was a piece of textile hanging on the frame. It showed that the darkest areas were those with the closest touch between the glass plate and the object. This is because of the absence of an external light source, or foreground light if you want, and shadows created by interior lights.

To capture the illusion of a distorted image that is created by textured glass in real life I used Effectsbrushes, including the Diffuse Blurfrom a Photobrushesgroup and the Texturizebrushfrom the same category. The Texturizebrushuses texture images from the collection of Papersto reveal the effect. The original Fine Hard Grainpaperwas ideal for the purpose so there was no need to find or create my own texture (Fig.05). 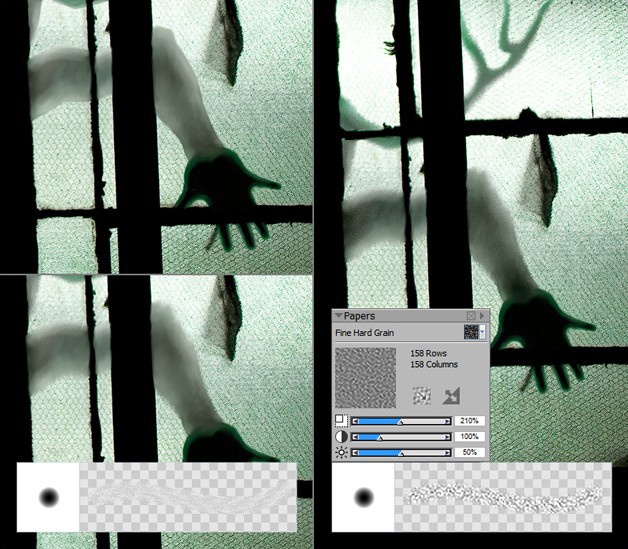 I moved the image back to Photoshop at this point in preparation for the final touches. The effective thing about Photoshop is the automatic updatesfor open-end images in case there are some changes written to the source file on the disk. So, in my workflow, I let the image opened in Photoshop at the beginning and saved the painting from Painterto the same file. This let me continue to work with just a single switch between the applications.

The next step was the final touches. I made the effect of showing something behind structured glass even more pronounced by duplicating a crop of the glass texture from the source photograph layered over in Pinlight mode (Fig.06). 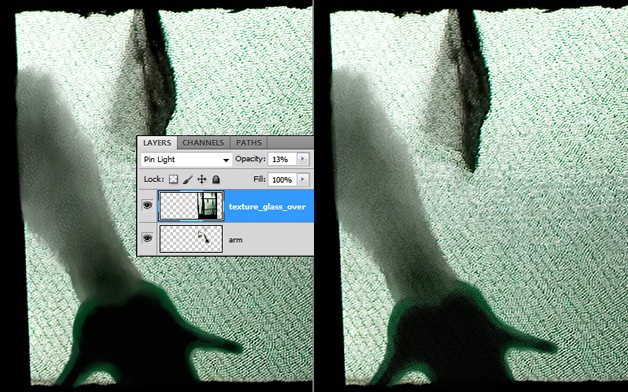 Extra glow coming from the neon lights was painted with a smooth basic brush as a subtle halo effect. Part of the antlers wrongly appeared to be in front of the window, so I covered it with a duplicated crop of an original image with gradient transparency applied to it (Fig.07). 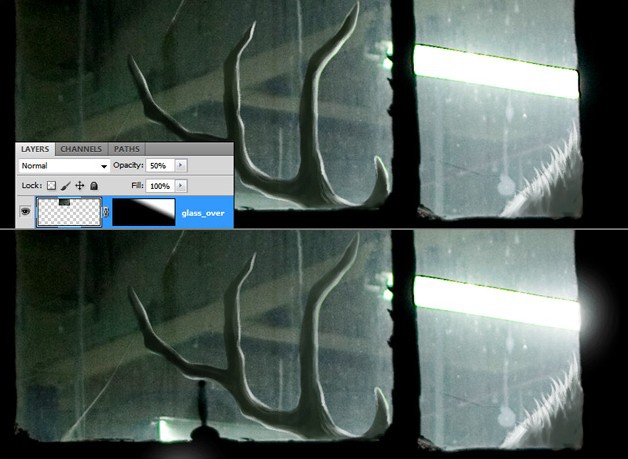 The last step was to use Uniform Noise on the flattened image to emphasize the look of the film frame (Fig.08). 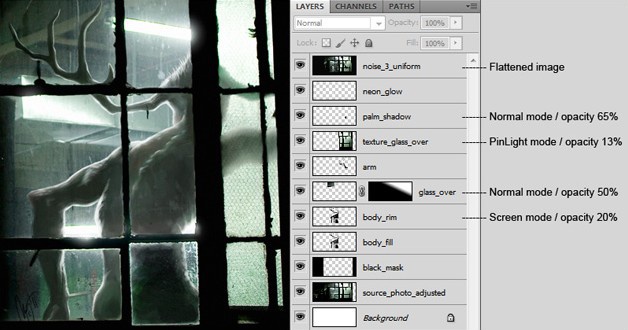 I am glad the image got some great feedback even though it was a speed painting and its production was therefore fast. I hope this tutorial helps with some workflow ideas for beginners.

Juraj Molcak is a freelance visual artist and director from Slovakia. Currently doing graphics in the field of casual games, Juraj likes to focus his personal projects on film and motion graphics and traditional painting. Feel free to check out more of his production at www.molcak.com