Making Of 'The Rapture'

This image is a part of an animation that I have been working on from time to time, and I made it to keep my spirits up - to keep motivated for animating. Â It all started a long time ago, at the moment of boredom, when I drew a strange character that resembled a cat, rat and a bat - all in one. Â I did some small animations but I never had a setting for it, so I created this scene. Â The concept for it was done in another moment of boredom; I imagined a complex room with lots of stuff there so I tried to make a low poly proxy version of it before doing any serious modelling. Â I decided to experiment a little so I drew everything I wanted to have there on paper, and used that as a texture. Â I projected it on a hollow cylinder and extruded parts, like the desks, windows, shelves and washing machine - just cutting and extruding. Â Max's cut tool has a mind of its own so I really enjoyed the careless cutting that made a lot of illegal geometry! Â The low poly model was very helpful when I started with the high poly; I knew what was left to model and where everything should be. Â Most of the things I did according to low poly, although I did change some things... Â For the fun of it, I also tried lighting the low poly, too, using lights and colouring the geometry with vertex colours. Â It came out very cartoonish! Â I think I will do a short using that technique for scenes and characters in future - there's no need to render at all, as it looks good in DirectX! Â (Fig01 and 02)Â 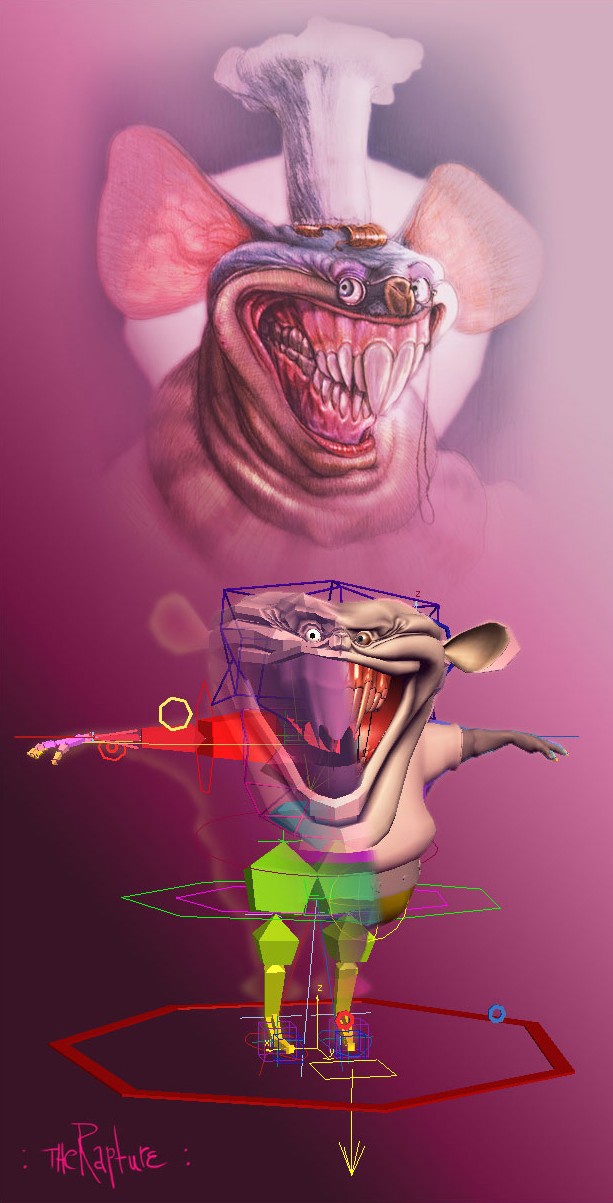 The main problem that I was trying to solve was in the texturing and rendering. Â I'd like to focus on that here since everything else was straight forward. Â First of all, I had lots of objects that I didn't feel like I would want to map and texture, individually (I guess I'm lazy, or just seemed to be overkill doing all that!), so I tried to come up with a way to make groups of materials for certain types of objects. Â I made large, generic textures of metal and wood with distinctive features on them, and combined them with vertex colours that I painted on every object (using a bump map as a mask for mix amount). Â I used the Vertex Paint modifier for the first time (3ds Max) and I lo-oooo-ved it. Â I placed it below the subdiv. modifier mostly; it makes the colours appear smoother. Â I use this technique as often as I can, whether for basic colour planning that I bake and use in 2d apps, or mixing with generic textures to get more complex materials. Â I also used it for faking some colour bleeding effects on static geometry, too.
Â
You can see red and green shades on the wall around windows on the final render. Â I managed to colour a lot of objects in a really small amount of time using just a few textures - and had fun doing it!Â  Another reason why I did this was to save some memory as I had to keep in mind that I was primarily doing a scene for animation and I would need every speed boost I could get! (Fig03) 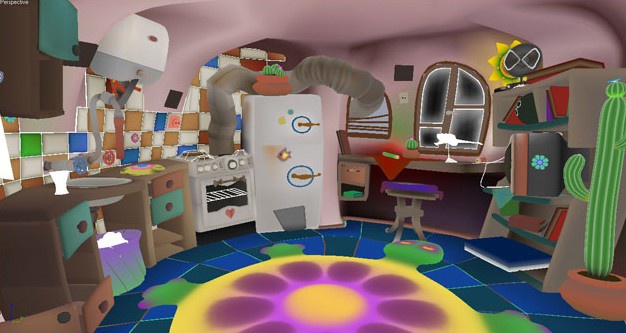 A similar problem occurred whilst attempting to render the whole thing... Â I tried to avoid rendering lots of separate layers of geometry (i.e. characters, foreground, background) and any kind of global illumination solutions that could fight with animation by flickering and getting out of hand. Â I had no experience with it then and I'm still avoiding it as much as I can now by faking it...Â  I'm waiting for a real-time GI!!
Â
After a few weird experiments with mental-ray GI, I decided to go with simple scanline and the power of Max's shadow maps. Â I used lots of lights: 2 main spot lights doing the sunlight through the windows and casting the sharpest shadows in the scene (I wish I had the present viewport shadow preview then!); other lights were meant to create an impression of GI by casting very soft shadows around the scene - I placed a few to reflect the sunlit floor around the room; others were mostly omni lights and spot lights directed at parts of geometry that would just look nice if lit by an angle that I decided would look nice. Â I also lit parts of the scene that were too dark and boring, although no light could get there in real life (the purple light on the ceiling above the fridge for example).

So, a cartoonish, unrealistic approach to lighting, I guess? Â Especially by creating colour contrasts with warm and cold, light colours! Â My first and only goal was just making it feel nice and cosy without trying to think about what's possible and what would not happen in real life...Â  Max's translucent material helped a lot; it's bad if used with shadow maps due to unwanted artefacts which make it practically useless, but I guess the artefacts disappear and cancel each other out when lots of shadow-mapped lights are hitting it. Â Plants, character's skin, ears, teeth and the yellow plastic ducky are good examples of it! Â I think that material deserves a little more attention: it's a really good fake, especially with the occlusion layer overlaid on top!
Â
I played with reflection maps a lot, too. Â Every model I did had smooth fillet edges and reflections made the highlights look cuter. Â In the end I used just one map, I think: a small .jpg that had good light/dark parts and some greenish shades. Â Every material had it, mostly mixed with fresnel and blurred a lot. Â This helps defining your volume, even if it's very weak. Â I guess I could have made a spherical map of the room and used it instead...? (Fig04) 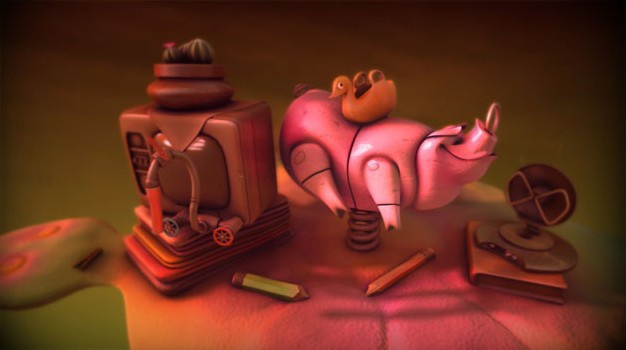 Later I combined the scanline pass with an ambient occlusion pass and that really made a lot of difference. Â Occ. is a really cool invention in rendering and it saves my neck often!Â  Â I rendered a few animation shots and the render time was OK, keeping in mind that I used several layers for each shot; scanline (regular mighty max scanline with speculars, reflections and shadow maps), mray occlusion, volumetric (for sun spotlights).Â  Plus a fake DOF channel, which is a simple greyscale falloff shader applied to the whole scene and linked to a helper object's distance. Â That way I can control what is in focus by animating the helper's position in the scene, and doing extra tweaks in After Effects by applying curves to it. Â Although it can be used to accentuate the geometry in focus in many ways, it's best as a mask for Compound Blur to fake DOF. Â Finally, the image went thru a lot of colour corrections and some painted highlights in Photoshop to get the more cartoonish feel (Fig05).

The character's hair grew later, so I created another layer for that, and for the saliva hanging from his teeth. Â The animation was rendered in smaller resolution (1280x720) than the image I'm presenting now, but the render process and post work was basically the same.

You can download the HD quality WIP at: http://sittingducky.deviantart.com/art/theRapture-part1-wip-57192771 and the longer, unrendered version at: http://www.sharecg.com/v/17954/animation/theRapture-Wip2
Â Â Â
I hope this helps a little!Â  Thank you for reading, and to 3DTotal for Excellence Award.:) 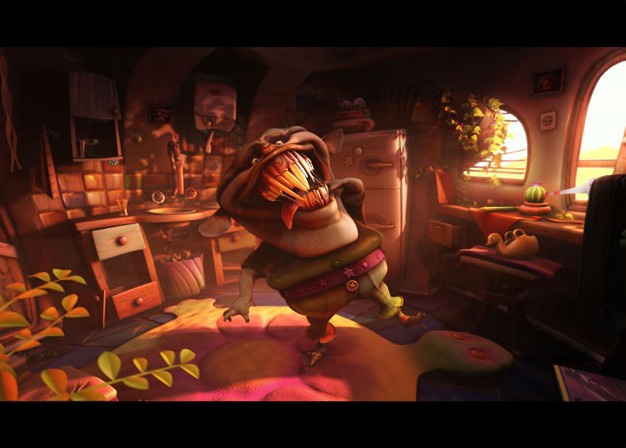