Making of The Pumpkin Tree II 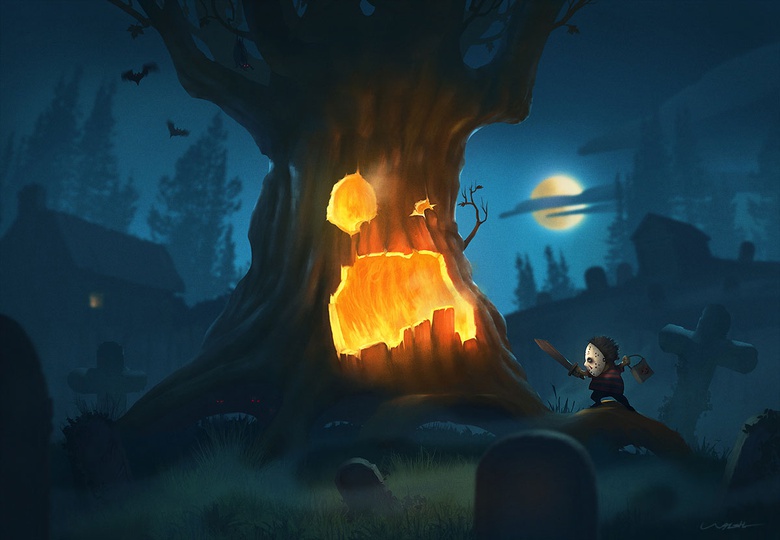 Every Halloween I try to make a spooky painting. One year I made a piece called The Pumpkin Tree where I crossed an old tree with a Jack-o-lantern. It's a bit old now so it's no longer in my portfolio, but a year or two later I followed it up with this piece so I could push the theme a little more, make it more dynamic and apply what I'd learned about digital painting since the last one.

This might be the most vital step in the whole process. Sometimes you'll nail it sooner and sometimes you can be churning out lots of thumbnails trying to get what's in your head onto the canvas. In the top right image in the set of four I started to feel like I was getting warm. I liked the depth in the scene and the pumpkin tree's expression. Then in the top left thumbnail on the set of three I really warmed to his shocked expression and it made me think he could be scared of someone else in the scene, hence the final thumbnail where I added a little trick-or-treater. This composition is also very bold and graphic, I wanted it to be about the boy and the tree and everything else should support that and sit well back. 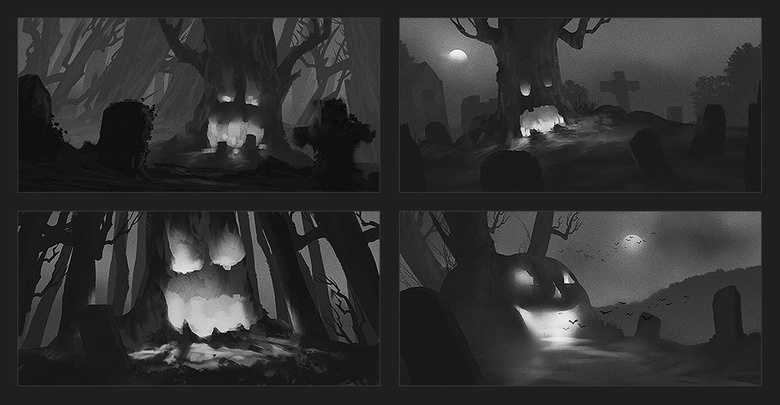 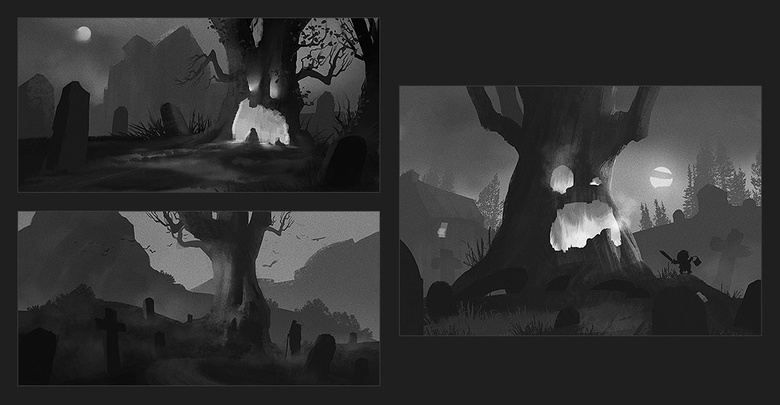 Trying to create a graphic, simple read while telling a story

First I up-res the file from about 2000px to 4000px. What's great about the workflow of this particular painting is that the thumbnail really nailed everything, so all the major decisions had already been made. This is not always the case as sometimes, when you go from small to big, certain things can fall apart as various problems are more noticeable.

So I take all the separate layers which I'd used in the thumbnail and start to apply some basic layers of paint just to lay down approximate colors. Nothing fancy and no layer modes or effects except maybe a dodge around the flames. 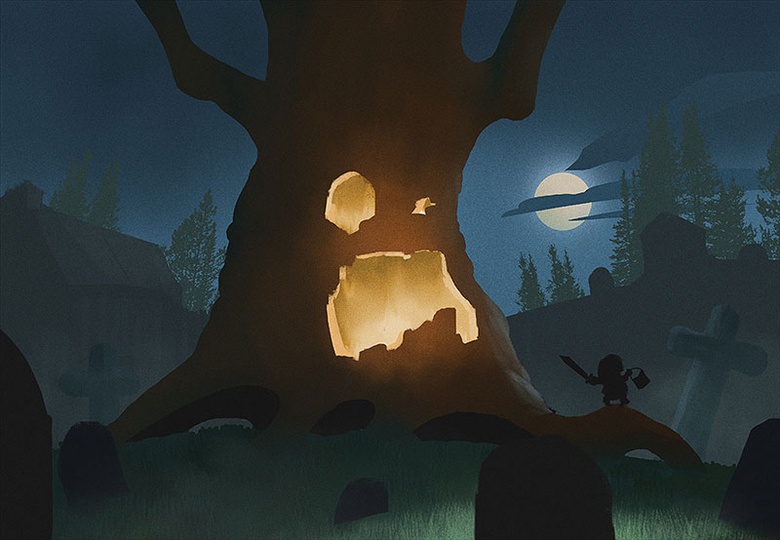 From black and white thumbnail to color rough

I'm now trying to make sure things read properly and that the ground plane has form and dimensionality and that the tree sits atop with it all looking like it sits in 3D space. So I created layers of grasses using a grass stamp brush. I used the implied lighting from the mouth to give me an excuse to show first some lit silhouettes against the darker form of the tree, then a space of illuminated grass which will give our dark headstones a read, then back into the foreground darker grass again for some more grassy silhouettes to read against the light grass. All this creates nice ground texture and also sells the lighting because it's landing on objects in the scene. I also decided to lift the tree off the ground, almost as though he has legs, which further personifies him. 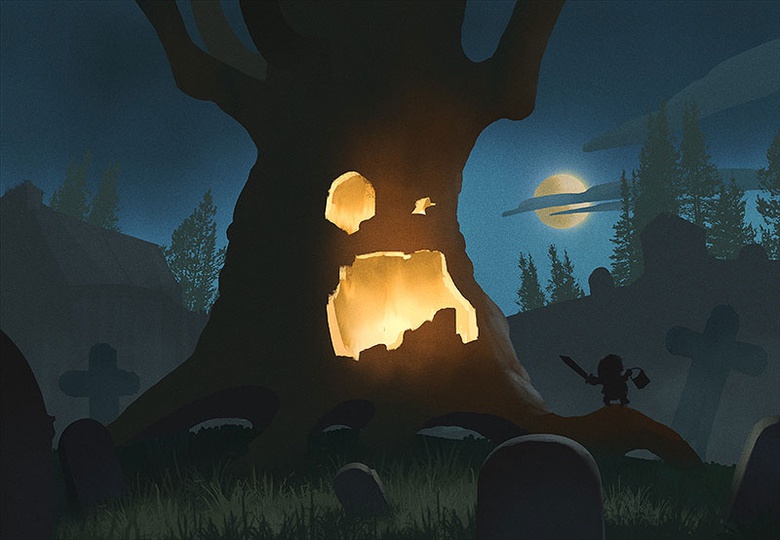 I think all artists know how important it is to set up some color contrast and so here I'm taking the necessary steps to play some cools against the warms. Even if there wasn't a big blue sky to provide a secondary light, I think I'd just put one in regardless as it not only helps to describe a three-dimensional form but also adds mood. We can appreciate the warms even more when they're set against the cools. I'm beginning to add texture and form in the light areas of the tree too. I wanted him to have old, gnarly bark. 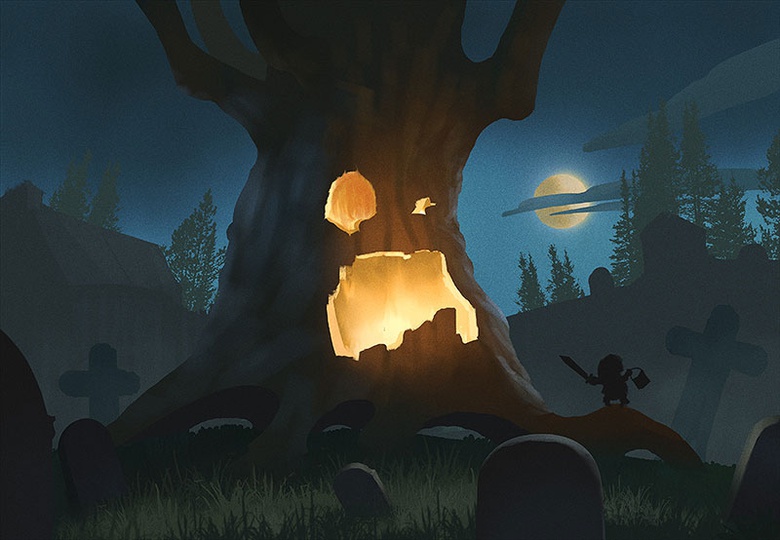 So this step is pretty fun because we're painting a tree, but also remembering that it's not just a tree, but a carved pumpkin that has a fire inside. I did a little research and looked at photos of jack-o-lanterns to see how I might work in some sub-surface scattering and translucency wherever I could. This really helps to illustrate what he is - a hollowed out, well, pumpkin tree! To that end I gave his mouth and eyes a little thickness (like a pumpkin's flesh) and then went about subtly applying the dodge tool to any areas that were thin and sitting right in front of the light source. This is mainly going to be seen in his teeth, which have a nice orange glow to them. 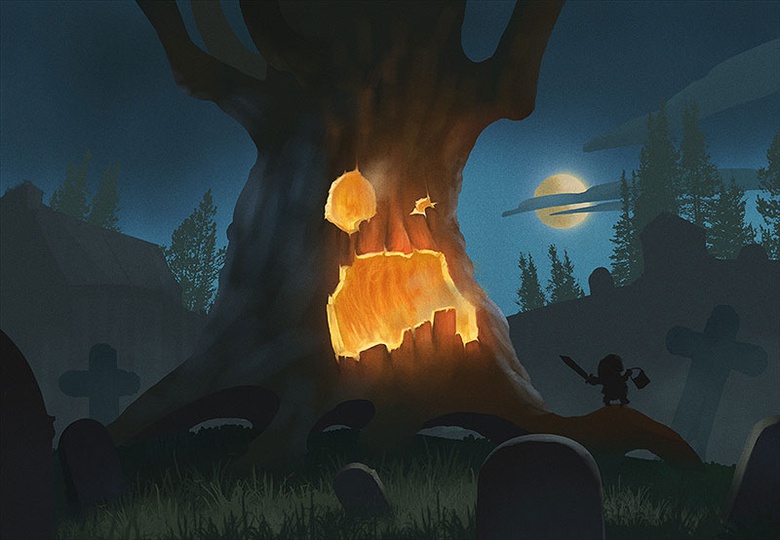 Here I just felt like we were zoomed in a little tight, so I shrunk everything down slightly. There was also too much contrast to the right and not enough contrast to the left. On the left we can now see his silhouette that bit more, mainly in the upper limbs. This seems to balance the overall composition so it's not too obviously focused on the face of the tree and the boy. I've also started to paint in more detail into the tree itself. 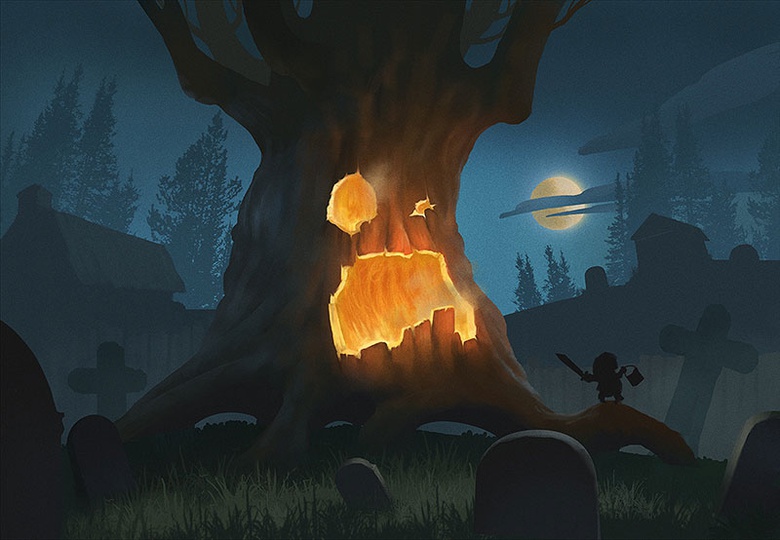 This might be the most fun aspect for me - noodling away on the yummy texture of the tree with a nice warm/cool lighting set up to make it easy for smaller forms to read. I gave him a sort of ribbed, bumpy bark which wraps nicely around the form and helps to give the impression that he's roughly a cylinder shape. As it turns toward the moon it'll pick up just a touch of rim light. I also up-lit some of the bark that pushed out which always tends to give a spooky vibe to a painting. 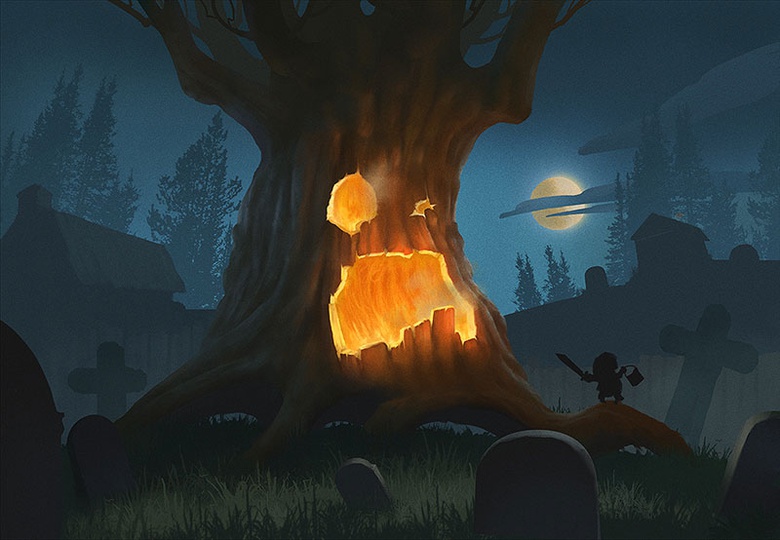 Painting some love into the tree

Now that I'm happy with the tree texture, I force myself to put it down (rendering is such fun) and get on with cleaning up the rest of the environment. So the graves get some ivy and I increase the size of the little guy as he was pretty tiny. 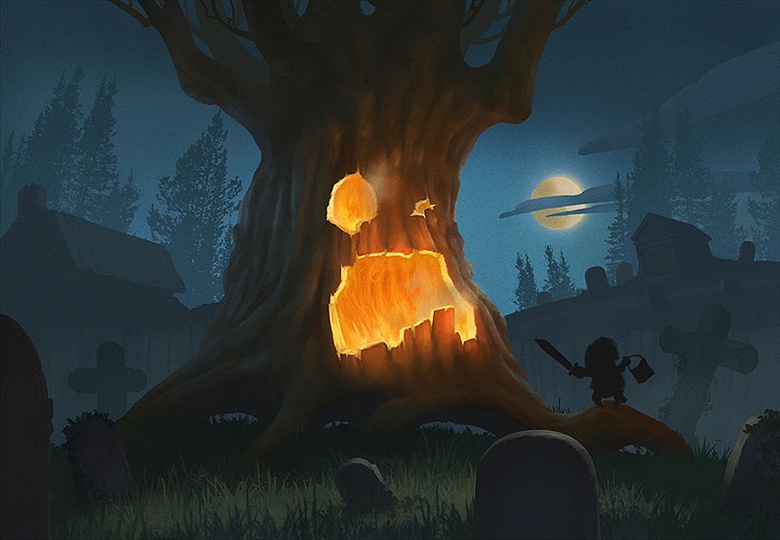 Working in the background elements

So once all the main components are done, I start to work in all the little details, adding a sprinkling of complexity to a scene that's largely bold, simple shapes. It's the big, medium, and small shapes principle and up until now I've been working on the big and medium. I add some paint to the boy and give him a hockey mask and a wooden sword as well as a little trick-or-treat bag. If you look closely there's a tiny pumpkin face on the bag. I thought the addition of bats and little red eyes would just give that extra layer of Halloween spice. One final note on painting here - there's a very subtle rim light on the boy and the right side of the tree. It's only a little, but it really helps to sell the silhouettes and the believability of the lighting. 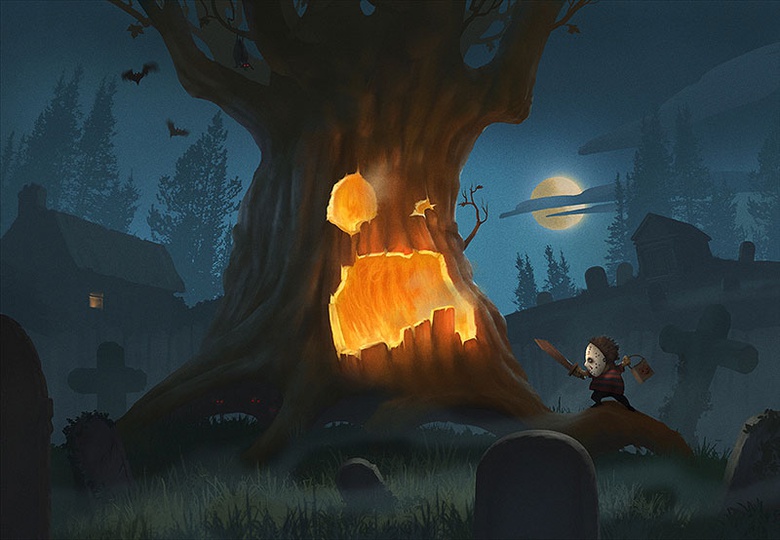 So a while after I made this piece, I went back to update it as a couple of things were bothering me. I wasn't keen on the silhouette of the left side of the tree and I also felt the colors could have been pushed a little more. So I got out the file and corrected these issues. And one final touch just to add some dimensionality to the piece - a depth of field effect added to the background and foreground to really pull the attention to where it's needed. 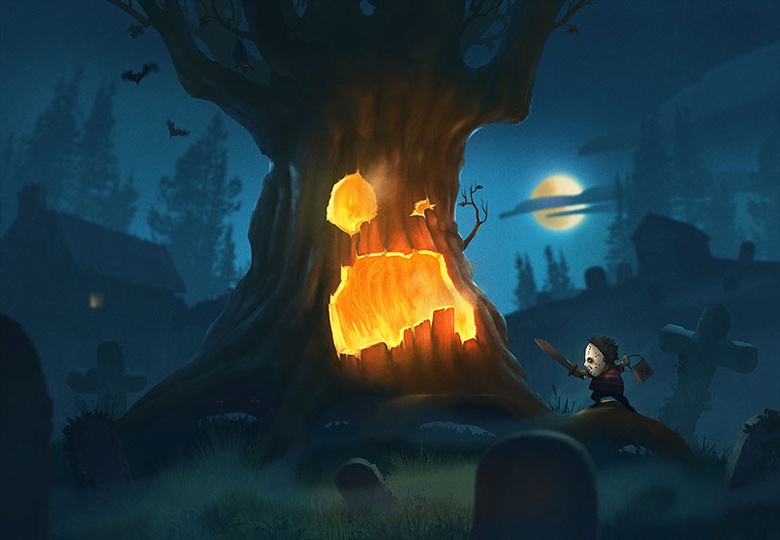