Making of 'The Prometheus'

Hi everybody, we are Marco TÃ¼rr and Sebastian Skupch from Germany and we want to give you a short overview of our latest project "The Prometheus". We are both students in Virtual Design at the University of Applied Sciences in Kaiserslautern. The idea behind "The Prometheus" was born in the summer of 2008 after we finally finished an interior visualization project for our study and wanted to model something more complex and challenging for our personal portfolio. When a friend told us that he was starting to build a giant-scale RC-model of this nice aircraft and that he had all the blueprints and reference-pictures, we decided to reconstruct The Prometheus in 3D. A few months later at university, we were given a new project where we had to create a composition of a 3D-model and a picture as a backplate and we decided that we want to use this aircraft for that project as well. So let's start with the modelling process ...

Please note: for copyright reasons, we can't show the blueprints and other documents in this Making Of.

After we collected and sorted the model sheets, we started modelling the hood and fuselage as these parts are the most complex to model. It's important to create the fuselage as one part and detach the single coverings later in order to guarantee a clean mesh for the reflections etc (Fig.01 - Fig.03). 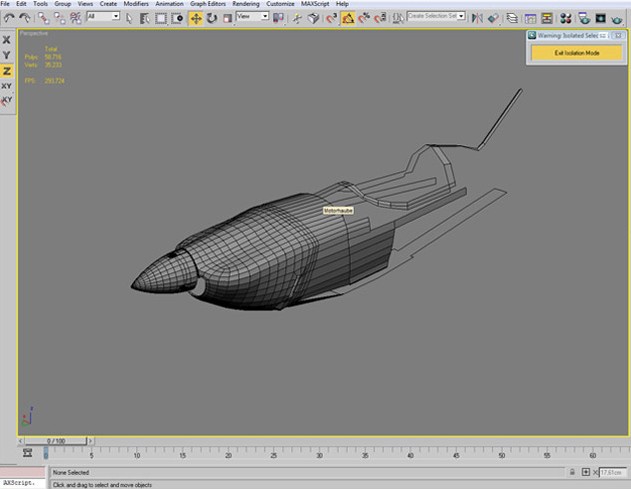 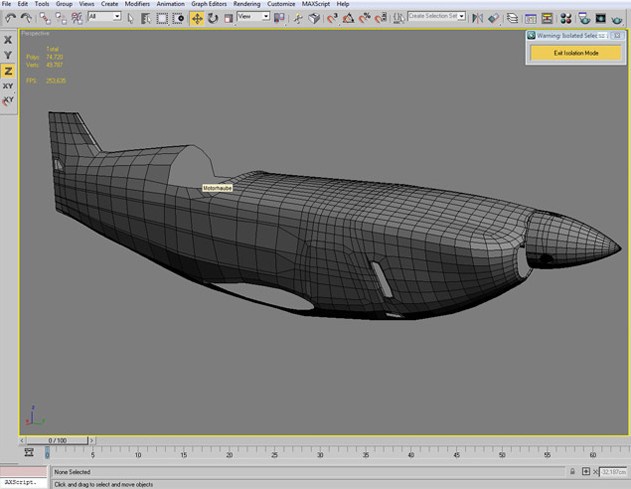 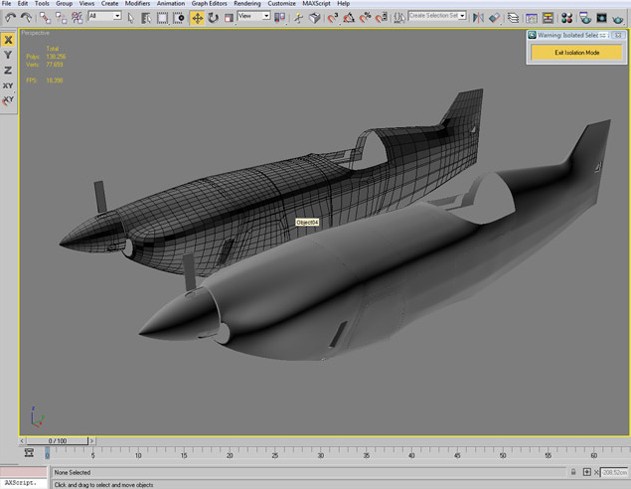 The next step was to create the wings with ailerons. These parts are quite simple and were extruded out of a shape, representing the profile of the wingtip (Fig.04). 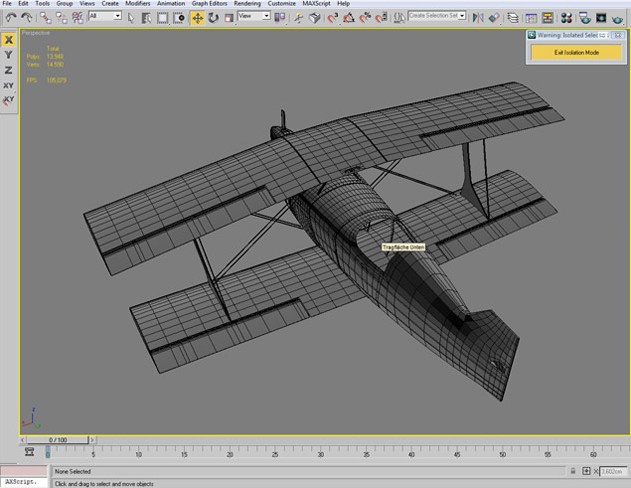 The tail units were simply extruded shapes which were chamfered. The pivots were set correctly to make it easy to move and animate the rudders later (Fig.05). 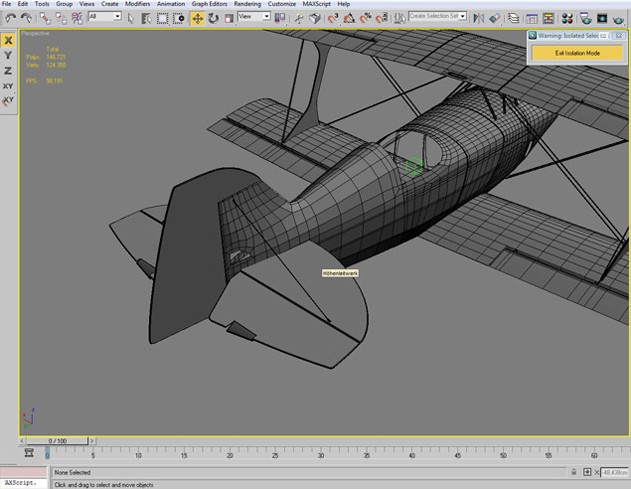 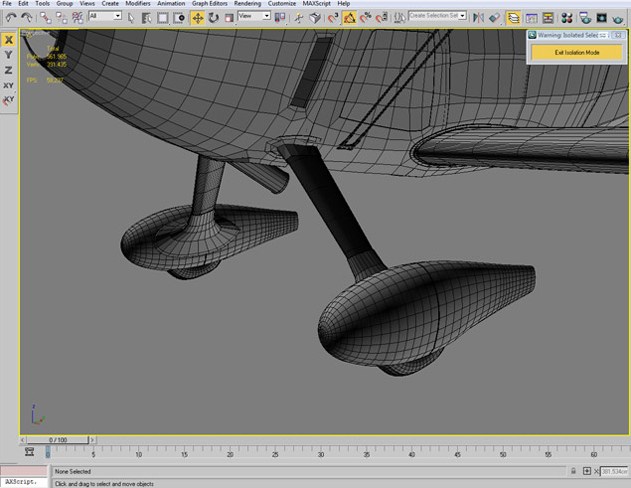 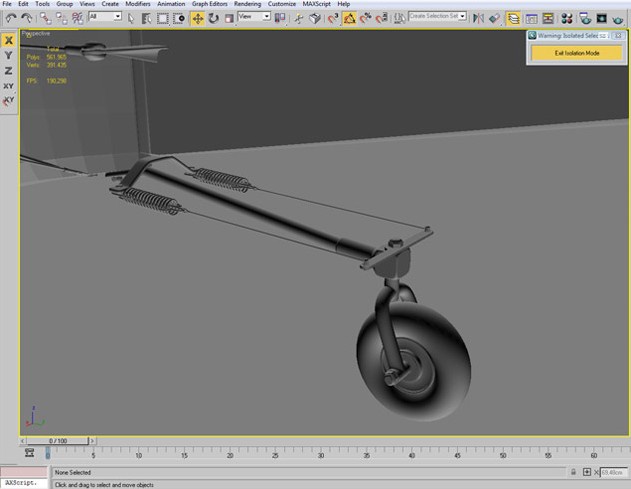 The panel was quite detailed, as we always wanted to have the option of making really close-up renderings (Fig.08). 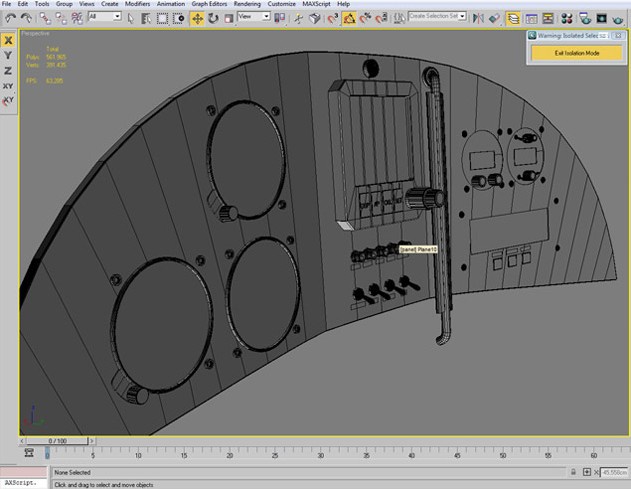 One of the trickiest parts was surely the propeller. It's shape was not easy to recreate and we knew that small mistakes could disturb the whole look of the aircraft afterwards. We started by projecting instances of shapes from every view to create the propeller (check out the picture to see what we mean)(Fig.09 & Fig.10). 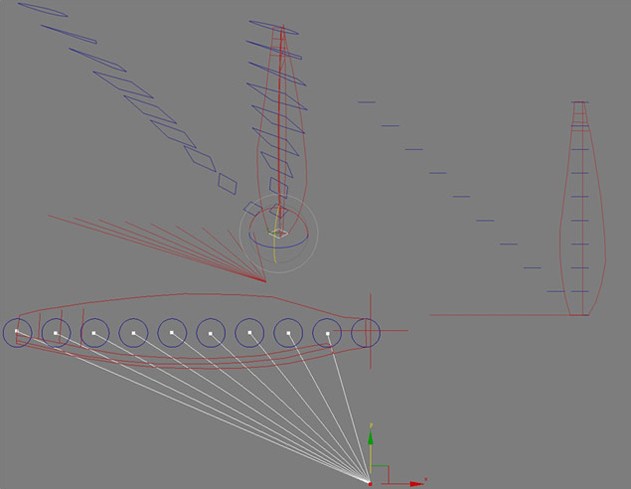 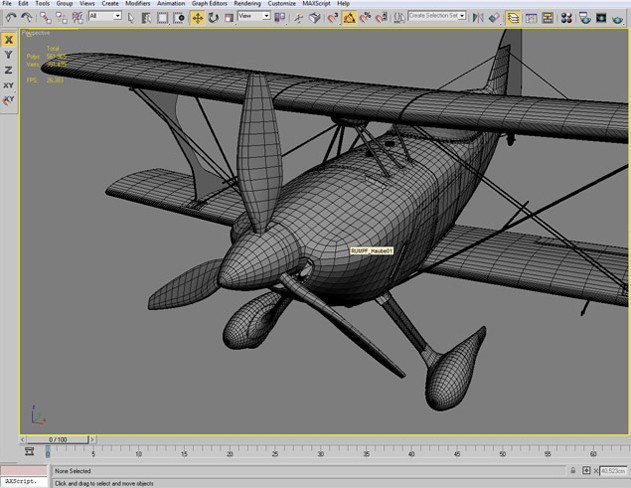 After adding all the remaining parts and details, we decided to actually model the screws instead of just painting them with the maps. This again gave us the possibility of rendering really close views. Here you can see how many screws we had to place all around The Prometheus (Fig.11). 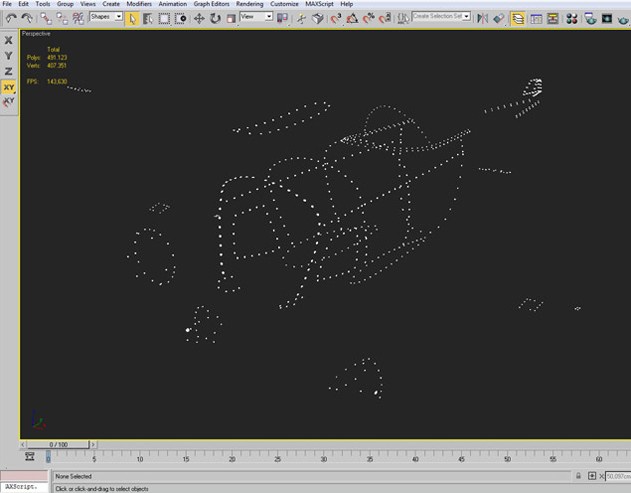 And finally, here is the finished model with the meshsmooth applied (Fig.12). 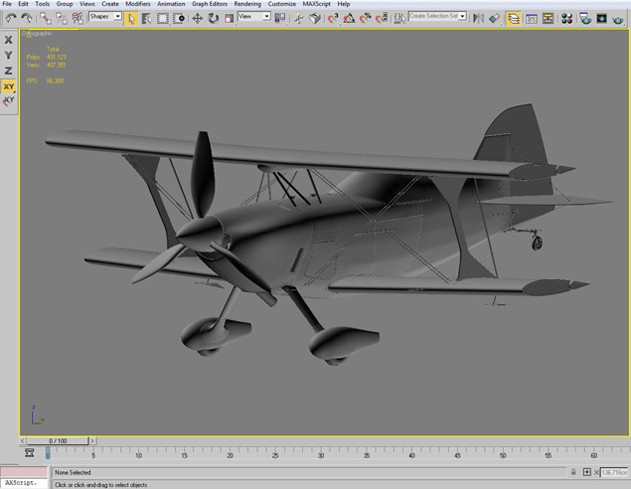 Most of the texturing part was realized with the help of Mudbox 2009, which allowed us to finish all of the texturing within about two days. We created stamps for every part, which could later be projected onto the model in Mudbox. Some final touch-ups of the maps and colour corrections were done in Photoshop. For every screw on the fuselage we created a small dot in a separate bump map to simulate a decent dent in the final rendering. To realize the typical dents of the covered wings, we painted some normal maps (Fig.13 - Fig.18). 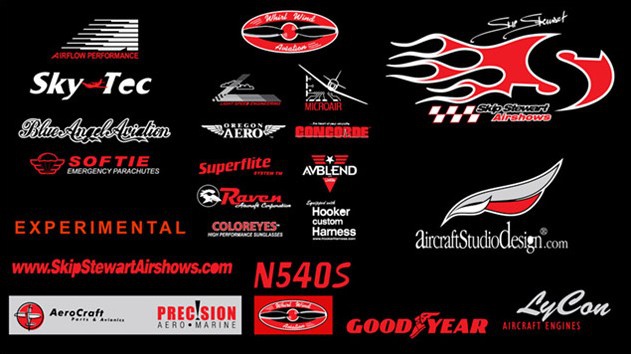 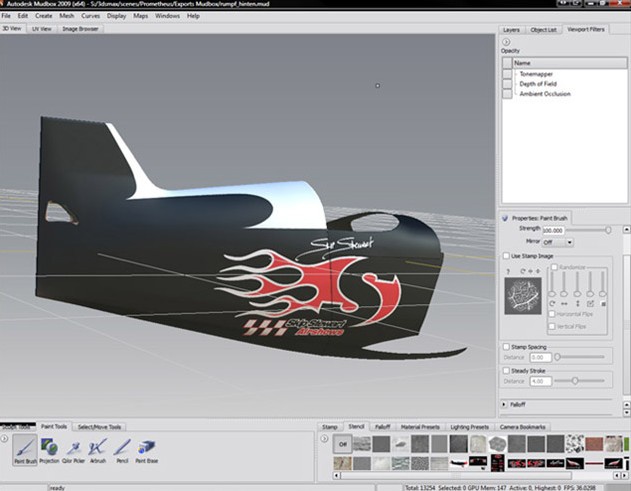 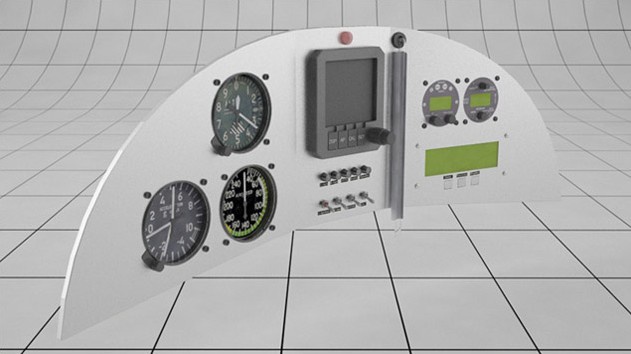 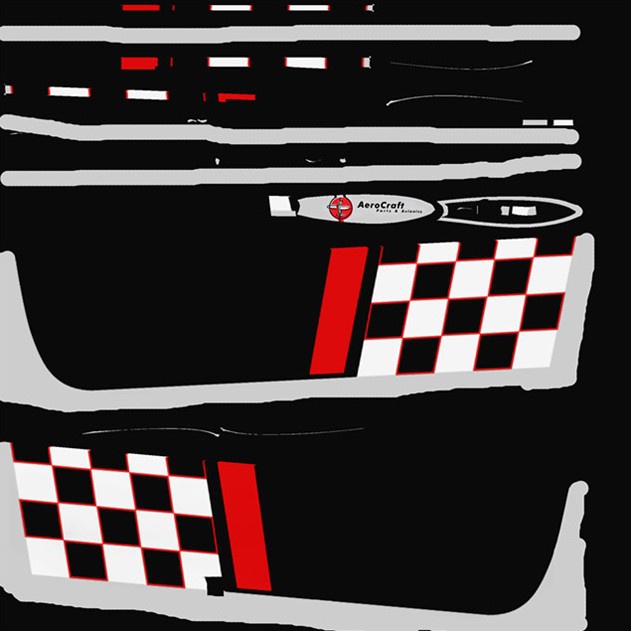 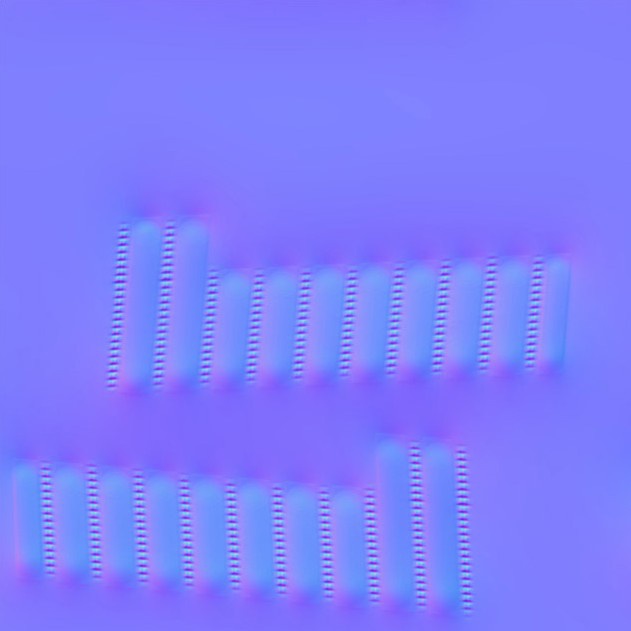 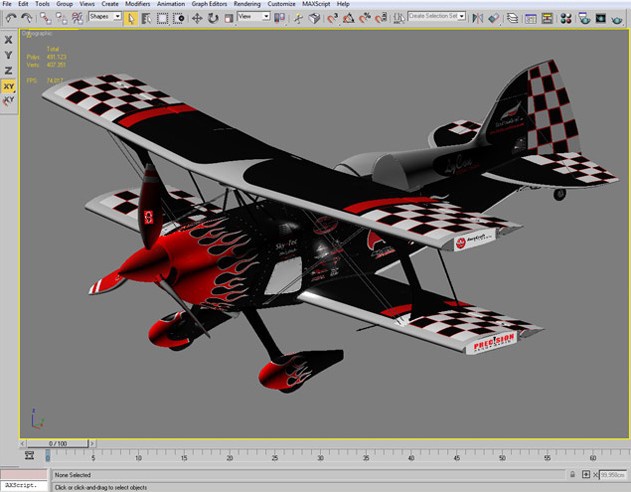 Here are the VRay material settings we used for the basic paint. The settings were not set up for realism, but only to achieve the desired look in our final composition. We use some different settings for studio renderings etc (Fig.19). 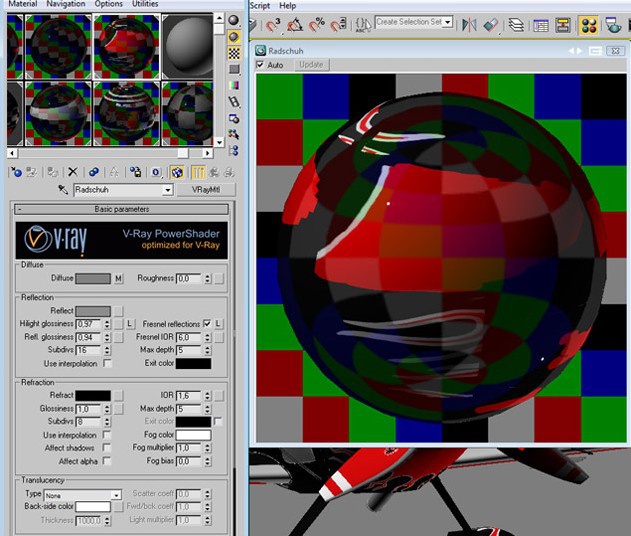 After we'd taken a suitable backplate picture, we had to do some corrections in Photoshop to clean up the background. The HDR-environment was taken with a SpheronVR cam, provided by our university (Fig.20 - Fig.22).

After matching a VrayPhysicalCam in 3ds Max and adding The Prometheus, we created a VrayDomeLight with the HDR assigned to illuminate the whole scene. Here you can see the render-settings we used and the final composition without any colour correction etc (Fig.23 - Fig.24). 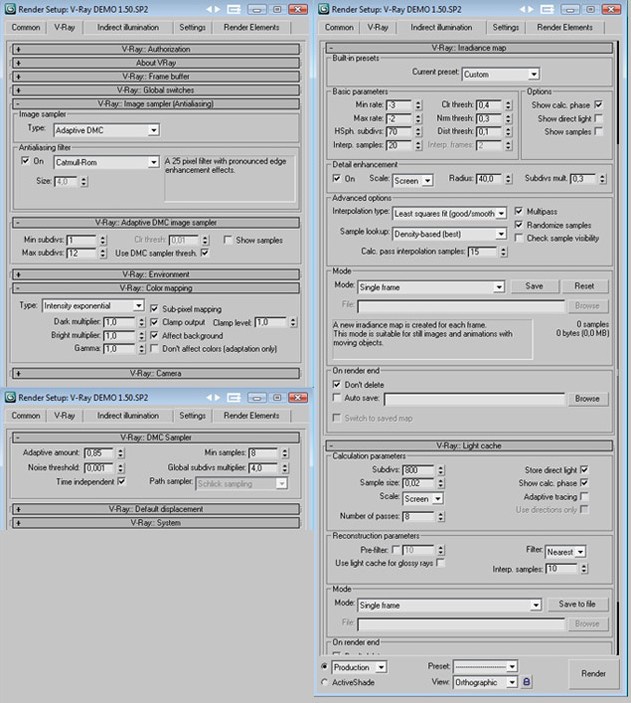 Finally, after some more corrections and touch-ups in Photoshop, this was our final composition (Fig.25).

We hope you liked our overview and the final result of this project. Special thanks to the 3D-Total team, Skip Stewart (www.skipstewartairshows.com) and our professors at the University of Applied Sciences in Kaislerslautern for supporting us with ideas and critiques and providing the necessary software.

If you've got any more questions about this project, feel free to contact us!