Making of 'The Poseidon Adventure'

Hello everybody, I'm glad to be here to share this work with you.Â  In this Making Of article I will talk you through some of my techniques and share some of my knowledge of the environmental rendering of this piece.

This ship was used to transport treasures; it disappeared without any trace near the Arctic Circle during a shipment. Â No one knows the reason for her disappearance, but in this image she has been rediscovered, and the expedition is aiming to find the answer of the secret which has remained unknown... until now!

First of all, I started off by creating some special custom brushes (Fig.01 - 02). 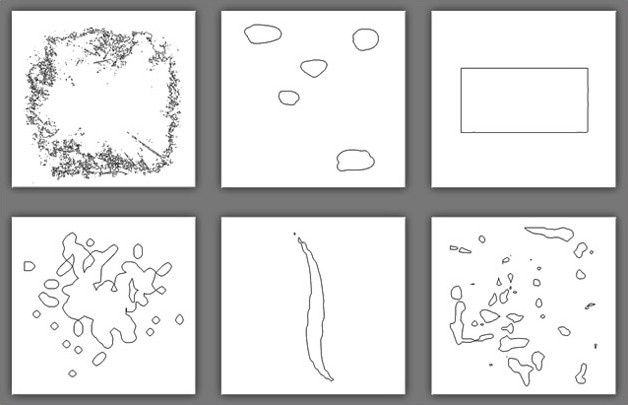 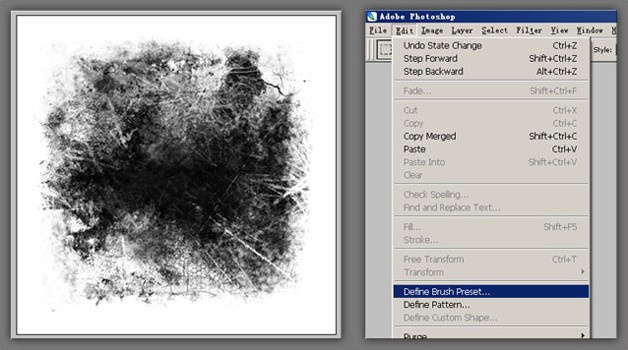 Here I created a texture! Â For this, a black and white picture was preferred. Â I then clicked Edit > Define Brush Present to create the new brush (Fig.03).

After naming the brush, I pressed F5 on the keyboard to bring up settings for it. Â Please see Fig.04 - 05 for reference. 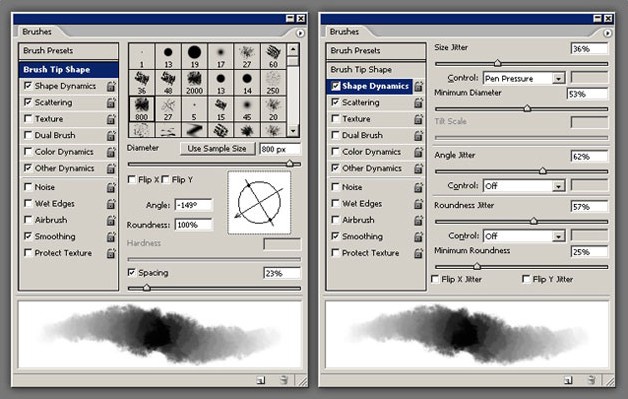 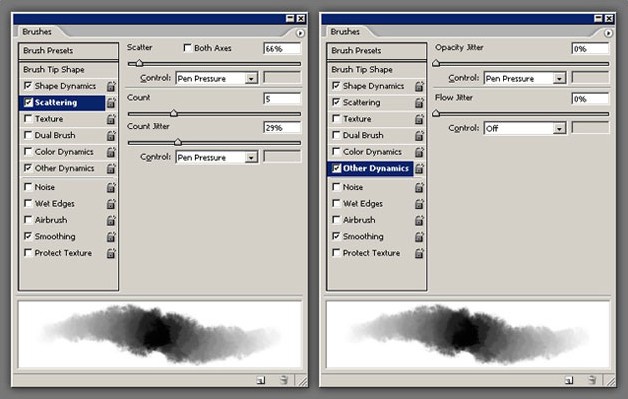 I generally take notes for my own ideas to use as reference as I work, which help me to understand what I want to express in my images. Â I'll then make several coloured drafts using rough shapes, trying to achieve some interesting elements with them. For example, with this piece, the two expedition members in the foreground of Fig.06 are important elements that 'pop out' from the main theme of the image. Â In fact, the draft is my favourite step of the whole concept process!

At this stage, the mood and structure of the whole production had to be settled upon, which was of great importance in the creation of this image (Fig.06).

As the next step, I decided whether any additional software was necessary in order to express the content of the production.Â  Using this piece as an example, 3D software helped me to build up the complex perspective relationship that I required, in the shortest time possible. Â It's simple for a camera to view the environment from every angle in 3D software, and using this technology I also discovered that a helicopter in the clear sky would act as a complimentary object in the scene (Fig.07).

For the specific assets in the environment, I used 3D software to render the channel and later separated some areas in Photoshop (Fig.08).Â  This made things much more convenient whilst allowing me to move on to the next step (Fig.09).

Here is a finished image with GI romance. Â I decided to finish my whole work using this image as a base (Fig.10).

I shaped some rough atmospheric effects in black and white to achieve the mood (Fig.11), and kept the whole image in the correct range. Â It was vital that a layer of ash was present to hold the whole image together better (Fig.12). 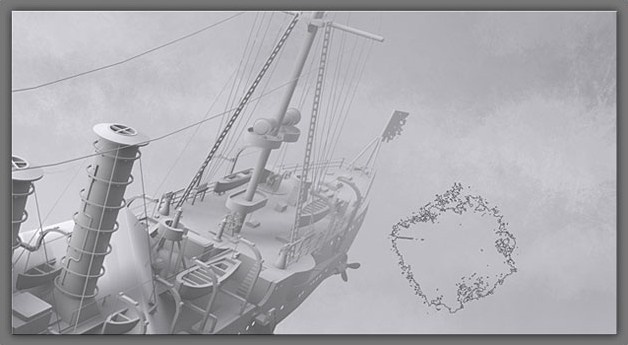 In the channel just created, colours were added to every large asset. Â Generally, I created a new layer on a black and white draft and added colours via the "Multiply" layer option (Fig.13 - 14). 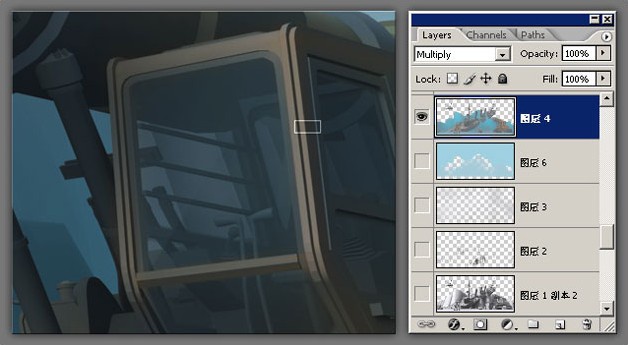 I then created a new layer, adding the details such as the iceberg, icicles on the sunken boat, the characters' coats, blurred movement of the wings on the helicopter, and so on (Fig.15 - 16). 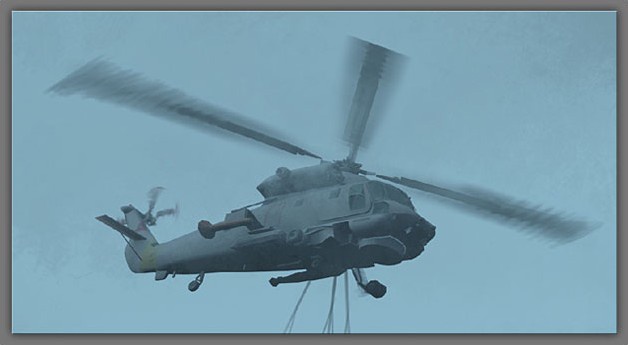 Here I moved back to the whole asset and added more details. Â For example, some frost was added to adjust the atmospheric effects. Â For newly created layers, the Colour Dodge layer option was utilised to show the light source, such as those shown on the windows of the mobile machinery, as well as on the headlights and so on (Fig.17). 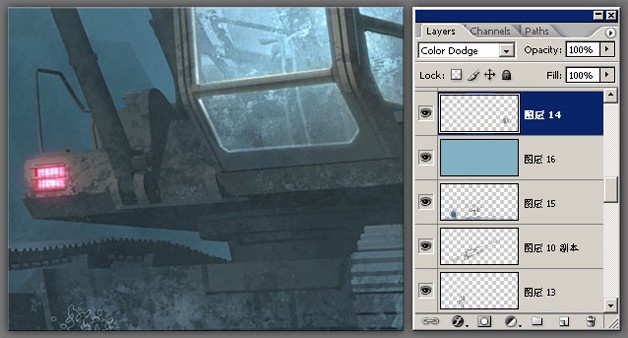 I then added some wind and snow effects. Â First of all, I drew some little snowflakes, then use Filter > Blur > Motion Blur to add a blurred movement which would enrich the image (Fig.18 - 20). 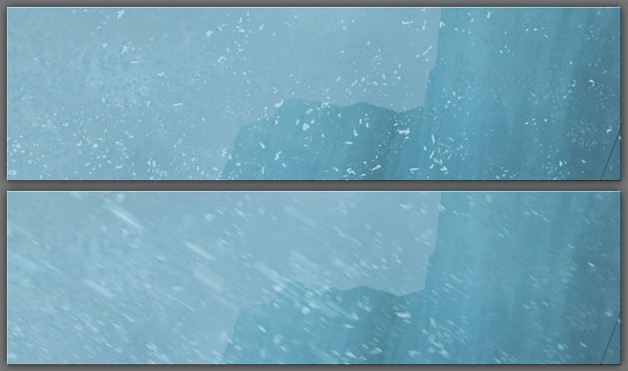 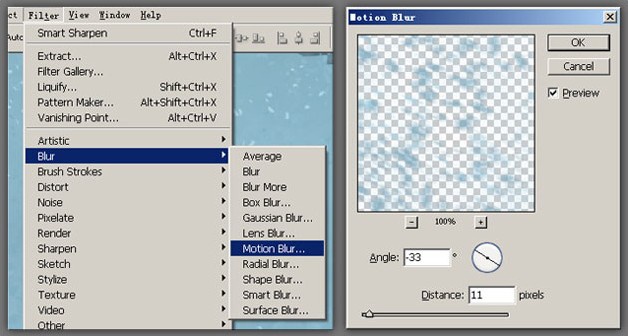 Finally, I used Image > Adjustments > Levels, to adjust the contrast and details, and I had then finished the production of "Poisedon Adventure" (Fig.21 - 22).

I will leave you with close-ups of some of the details that were used in the final production, along with the brushes used to detail each element (Fig.23). Â Thanks so much for your time! 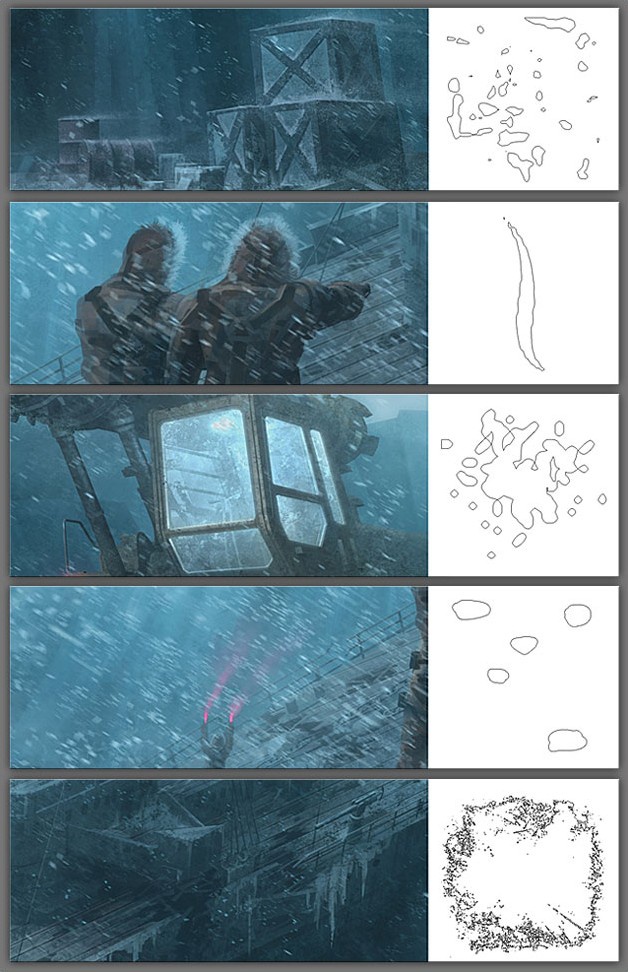 Important Note: The copyrights of this Making Of article and image, "The Poseidon Adventure", belong to Xin. Xin.Â Neither must be used without express permission from the artist.