Making Of 'The Last Goodbye'

This illustration is made for my personal pet project, Fall of Gods. It is based on a Norse mythology-inspired story about the warrior VÃ¡li, who sets out to bring back his murdered family from the underworld. I have always dreamed of doing my own take on this subject, as I haven't seen a project yet that has fully captured the essence of the mythology. This piece in particular depicts the moment where the main character VÃ¡li says goodbye to his brother and, in true Viking tradition, is put to rest at sea in a burning ship.

The book itself will be full of illustrations, with a distinctive semi-realistic feel to the images. To me, it's important to build up a dense atmosphere and a great sense of scale, so to achieve this I used specific matte painting techniques.

Matte painting is used in the film industry to convey realistic settings on the big screen. To achieve this realism, it is often necessary to combine a lot of different photos; the challenge being to produce a coherent look. As I am aiming for an illustrated feel for my book, I think of my pieces as concept art that just applies matte painting techniques.

I will demonstrate these techniques in the following article. I will go through several process steps including a rough sketch, color blocking, building-up the painting and applying the final finishing touches. I'll then finish with some highlights and tips.

So how do you capture that specific moment best? My solution was to create a very calm image, broken up by the dynamic and fierce flames from the ship. That shows the characterâ's inner struggle.

Here is my initial sketch made with some almost dried out markers, and a pen. (Yes, they should be refilled). 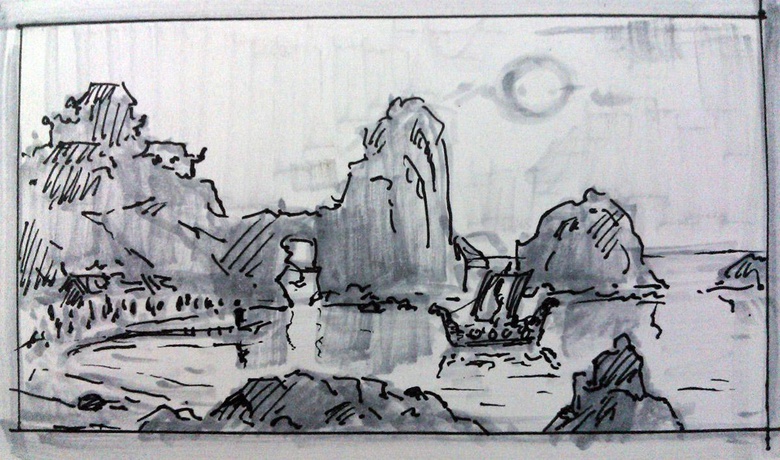 This is one of the most crucial steps, as this is the point at which the direction of the painting is determined.

In this project, I considered the composition and whether the image read well. I used a Chalk brush in Photoshop because it is quite rough so I didn't get caught up making too many details (which can easily happen when you get excited). To me, the most important elements of a great design are shapes and lighting, and that the whole color palette seems coherent.

Once I'd considered the direction I was going, I started all over again. I started by defining my horizon, sky and water, and of course the image size. I knew this was for print, so I made sure the image was at least 4000px and in 300dpi.

The foundation was much lighter than my original painting was. I did that to make it easier to control the values later on in the process, as I had a broader range to navigate. I returned to this at a later time when I tweaked the image with the curves filter.

I then blocked in the shapes of the cliffs. I used the Lasso tool, and simply followed my color sketch, but also made sure that the shapes seemed realistic as well as interesting.

It is a good idea to have a strong silhouette as you can apply texture on top in a very easy way, and still make sure your shape has clear edges (see pro tip section). I knew from my concept that the image would read well, so I tried to follow that quite closely.

At this point, I began to apply texture for the environment. I used good references of rocks and cliffs, and shaped it to my silhouette. The Transform tool using Warp was quite effective here, and I often used the Stamp tool to vary the patterns and then paint on top afterwards.

I made sure the texture blended well, so there were not too many weird artifacts. I also began to shape the architecture. I wanted this to feel like a town built around the natural environment, following the terrain. I wanted it to feel like a Viking setting, but without being something I have seen before.

After the base of the painting was roughly done, I had a lot of image information to use for tweaking the values.

First, I used curves to get the overall value right. Then, I used both a color balance to hit the right color and a hue/saturation. The cool thing is that you can always tweak these later and paint into the mask if you are not satisfied with the result, so you haven't destroyed any pixel information this way. It pays off to start out in a structured manner so you can tweak the whole image.

I used some time here to reconsider my image, and made sure everything fitted together and blended nicely before moving on. I made certain areas darker so the highlights stood out, and added details such as small clouds around the moon, highlights on the rock formations and more coherent texture around the village. For the clouds, I used a custom brush. Later in the process I used the same brush for adding smoke.

I then moved forward with the narrative element of the painting. I wanted a lot of people with torches on the beach, and the lonely brother standing on the pier. I always have characters on separate layers, so I can go back and add or erase if needed.

I found the right color for the yellow and orange/red to achieve the perfect dynamic. I also began to add smoke from the village chimneys, and light in the windows. At that point, the village was coming to life, and there was a good balance between the colors.

This step took some time. I found multiple ships that I stitched together in Photoshop then added a lot of fire around it. I still aimed for realism, so I used some time to paint on top and blend the different elements. I wanted the fire to feel dramatic as if it was devouring the ship. It added to the drama I think, and underlined the story of the lost brother. To me, the contrast between the beautiful silent evening and the violently burning ship perfectly reflected the main characters emotional state.

This was just a last final touch. When using this kind of approach, sometimes the image can get a little blurry. To make it sharper, I used the Smart Sharpen function, which can be found under Filters > Sharpen > Smart Sharpen. You can tweak the parameters, so you get the right amount of sharpness and detail. Be careful to use the radius above 1.0 though, as it can make some heavy halos.

And so the image is done. 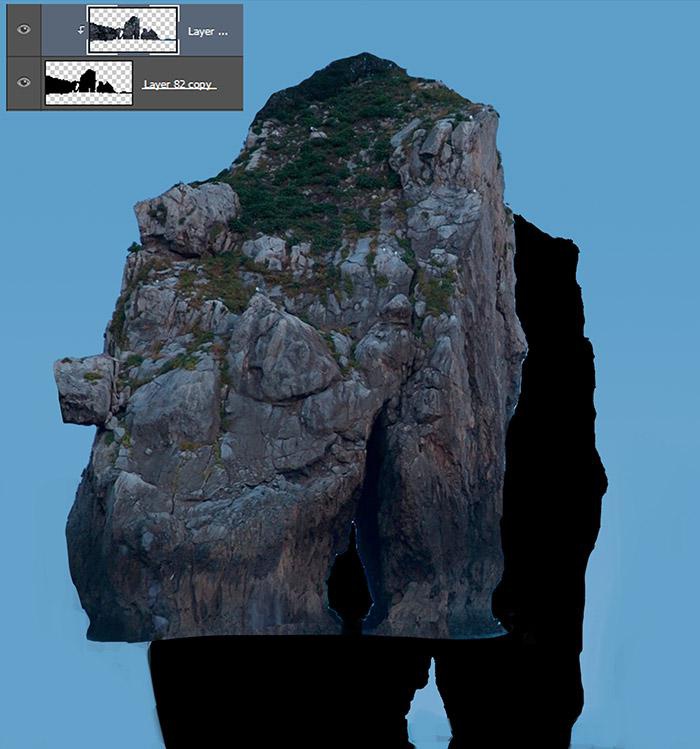 This is a method in Photoshop that I have used a lot, as it gives me control of my edges. When you hold down Alt between two layers, a small arrow will appear. This means the layer is only applied to the pixels below.

As shown in my tutorial, you can make sharp silhouettes with the Lasso tool, and then make a texture layer on top and not have to worry about whether you are inside the border. This way you'll keep your sharp edges which help define the shapes.