Making Of 'The Garage'

Composition of the Image

Hi, I am Qasim, a CG artist. I am working as a CG generalist, contributing my skills to an adventure game, and also as lighting lead for a cartoon series.

This is the making of my lovely image, The Garage. I started work on the scene back in 2009 and my main goal was to improve my skills in lighting, shading, rendering and compositing. The car model was purchased for an official project, which went very well and meant I got some time to experiment with the Audi R8. I love the design and look of the R8 and that is why I took a lot of time over this model. It started as a test and got some good reviews from my friends and colleagues. The image was initially done with the contribution of some of my colleagues (we distributed the scene due to a heavy work load of live projects) in the areas like modeling and texturing, whenever anyone had a bit of free time during the live projects. The car model was well detailed, but we did lots of tweaks for the high res imagery.

At that time, I finalized the image and stopped working on it. I am now taking you through the very initial phase of development. Fig.01 - 04 show the initial tests of the scene that I wanted to produce. 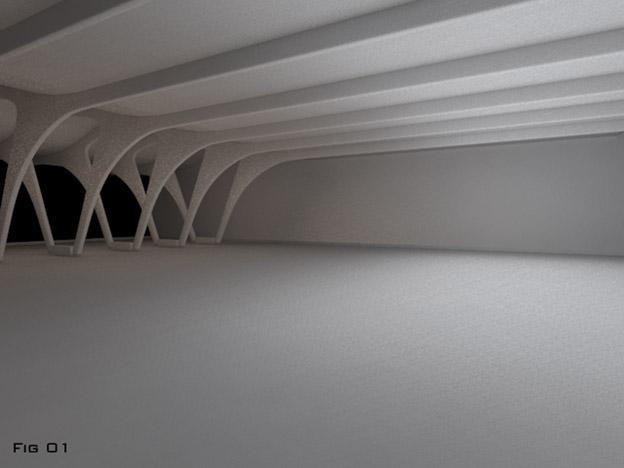 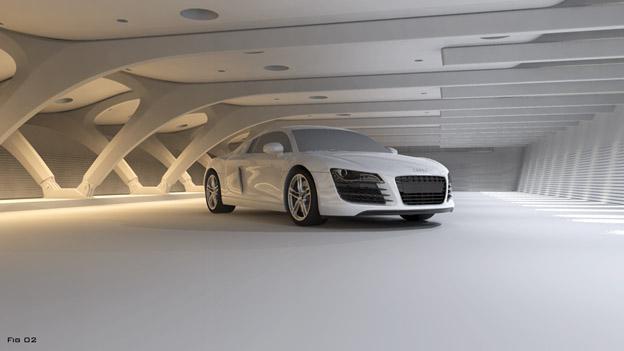 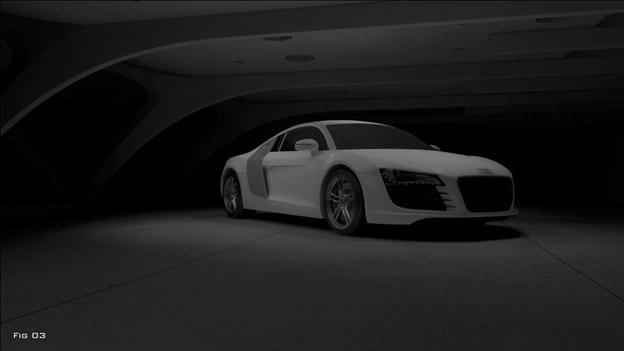 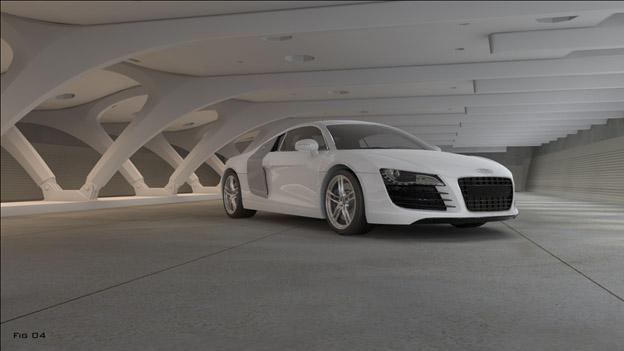 You can see the final render below in Fig.05, which was completed in 2010. 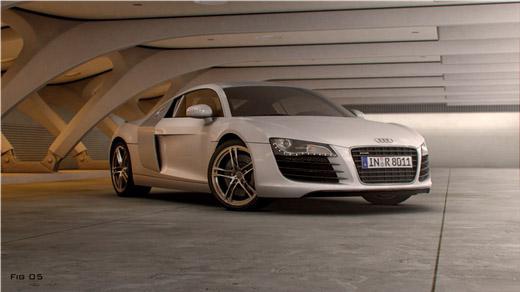 Recently, after I'd done some more learning, I got some time to reproduce the scene that I was aiming for and I came up with some angles which I thought were more dynamic.

As mentioned above, the car was a purchased model, so I will not focus on the modeling stuff.

Composition of the Image

I collect references as much as possible whenever I start a project and believe me, it is very good way to get started. For this image I collected references for the car, environment, lighting, textures and image composition. This really helped me in building my aesthetics in a rapid pace. This is the way I like to do it, and I have learnt a lot by following this method.

When I wanted to start the scene, and after a lot of searching, I finally decided to replicate an original photo shoot in 3D. It was a bit tough at that time because I wasn't much aware about composition and other stuff, and therefore I looked to one of my references for the camera angle (Fig.06).

For the textures, we wanted a clean feel, not grungy (although I like grunge more) and I worked very closely with the texture artist until the textures were good to go. The texture can be seen in Fig.07.

I used mia materials from mental ray, which I found to be very good. It is very easy to use, and has some very good presets to start off with which you can then tweak the attributes of. You can find some wireframes of the scene in Fig.08. 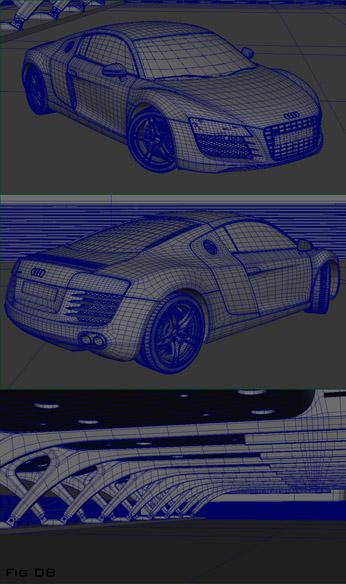 For the lighting, I wanted to create a rig that could distribute the light uniformly so that we could switch to any angle and just render the image and get a decent result. So I started with mental ray's area lights, but that was too costly in terms of render time. Then I tried some other tricks and finally came up with the type of rig that didn't need the samples to soften the shadows. The light rig consisted of spotlights and simple area lights in conjunction with point lights, with depth map shadows turned on. Three directional lights were also used as sun lights and for getting some bounce. The environment and the car were lit by all the lights, but the car needed some more hits in areas that I wanted to be highlighted. That job was done by some more spotlights. You can view some snaps of the light rig in Fig.09.

The attributes of the different lights I used are shown in Fig.10. 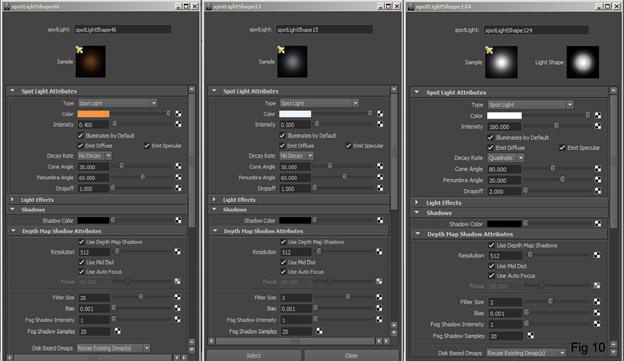 For more control and to improve my skill set, I wanted to create a handsome amount of layers so that I could handle the compositing freely. You can see the render layers window in Fig.11. 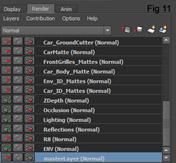 My render included the main passes, like beauty for the car and environment, occlusion, reflections of the lights on the car, Z Depth for the blur purpose etc (Fig.12).

The initial comp can be seen in Fig.13 (e.g., the environment beauty, the car beauty and the occlusion pass). 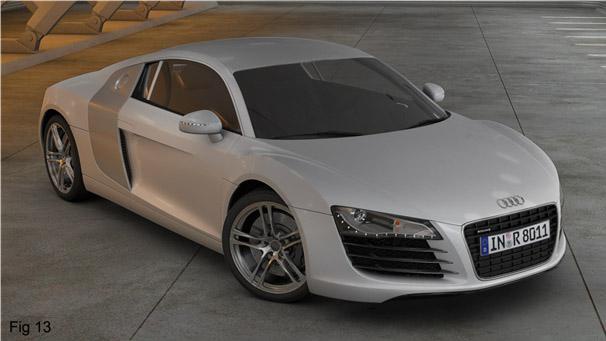 The shadow of all the lights were very soft because I wanted to get the shadow information from the occlusion pass and hence minimize the render time used in calculating the shadows.

One more thing to mention is that I used Final Gather for the bounce effect of the lights, for which the interpolation value was different for the car and the environment. Interpolation is used to minimize the blotchy effect of Final Gather points. I kept the values of the accuracy and point density the same, in the Final Gather options. You can find the settings in Fig.14. 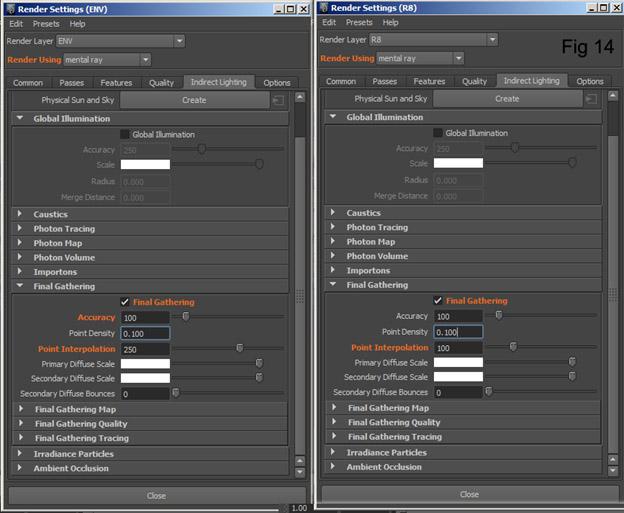 For post, I used After Effects and some third party plugins like Optical Flare. I decided to keep my layers very straight forward and simple, and divided the comp into four stages. The first one had basic passes comped together, with the addition of some gradient maps for generating some color effects (Fig.15). 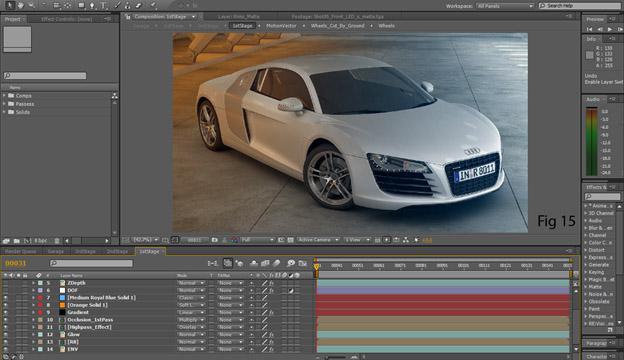 The second stage had some more detailing in terms of the color correction of the individual parts of the car. I also added another pass, which was for the headlights' lighting. Flare was also introduced at this stage (Fig.16). 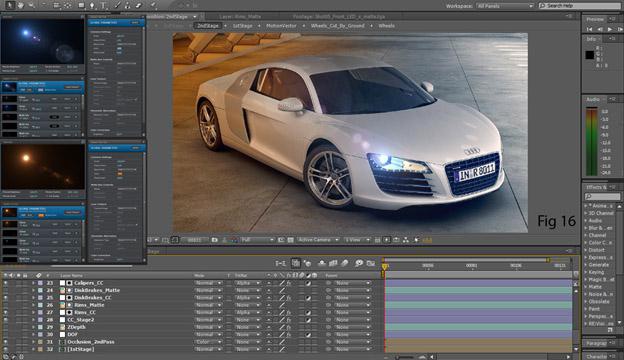 For the third stage, I added noise and a vibrant color effect that I liked. It looked like a VFX shot to me, so I kept it and continued on to post (Fig.17). 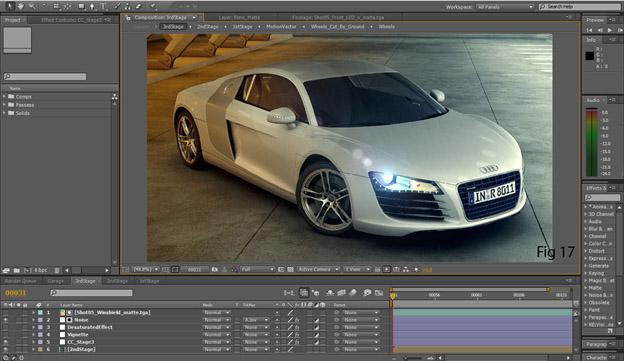 For the fourth stage, the chromatic aberration was added and nothing more special than that (Fig.18).