Making of the Dominance War II Winner - 'The Bigun' 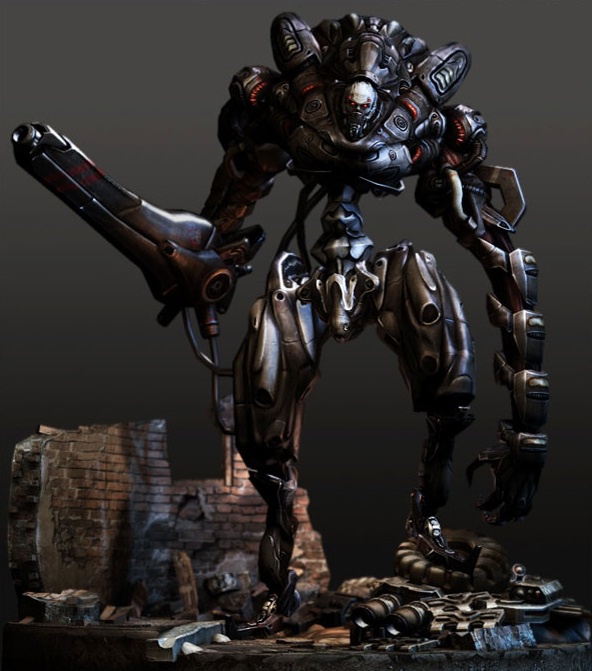 Hello, this is Taehoon Oh and James Chung. We're very pleased to share our work experience here. I'll handle the 3D part like modeling, textures and rendering, and James will take you through the concept part. The Bigun is the artwork we produced for the Dominance War 2 competition, where we won the grand champion first place.

When Taehoon contacted me to design the character for the DWII contest, I first had to decline due to my busywork schedule. However, I gave it a thought and suggested to Taehoon that I would direct the project. Besides, this way, I could bring in a designer who is way more capable than I. And I am very thankful that Karl agreed to design the character.

Taehoon initially expressed his desire to go for more of a human style character in a futuristic type body armor. Much in line of characters from games like the War Hammer, Unreal series or even the Gears of War (and probably more in line with CGtalk or Polycount's themes). Upon examining the contest categories as well as Taehoon's strength in modeling, I have decided to go with 3DTotal's "Machine Race" theme. Since Karl is an excellent mecha designer and Taehoon is an awesome hard surface 3D modeler/ texture artist, I thought 3DTotal's theme was more suitable for both artists.

After we chose which race to go with, next step was to come up with visual image reference. If we had months to develop such character, I would spend much more time in this stage to examine and establish what kind of visual/design target we are setting as a goal. Since we didn't have that kind of time, my solution was to draw inspiration from existing materials. These visual references were:

The "Borg" race from the Star Trek series

Anyone familiar with sci-fi genre should be familiar with these designs and the obvious connection to Bigun. Personally, I'm not into designs that lack social/historical context of the character. What I mean by this is that there is a lot of cool looking characters created by many talented artists. But, not many show strong contextual thematic design elements which helps the audience to feel the world those characters belong to. Our "Bigun" character was no exception. 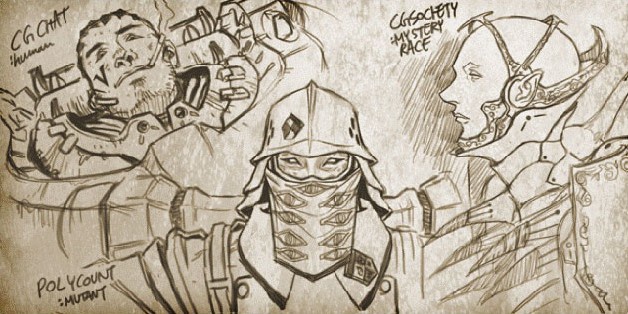 In order to set such parameter, I made a quick sketch of what the other three races might be like in the world Bigun belongs to. In order to preserve the concept of "race", I stayed away from using monsters or alien creatures. So, in our team's world, all four races were some kind of human derived characters. And the design of the character was to have a strong resemblance to a humanoid form of anatomy.

Even though Bigun is a human derived race, it is probably the least human like character out of all four races. Not only was the premise behind 3DTotal's race about a Polycount's race being fused with machinery, it was probably the least "decorative" when it comes to detailed elements within the design. At least, that's how I perceived it. This meant that for Bigun's race, any sort of non functioning/decorative elements probably would never exist. They are a race made out of people who are mass produced just to be a mean killing machine. Not only that, even from within that, Bigun's model of race were created to be Shadows, a class of specialized soldiers made to be dropped in the middle of most heated battle and cause havoc. For such a race, things to indicate personalizing decals, decorative patterns were meaningless. I wanted to focus on the fact that these machine race just rolls out of its factory just to be in the battlefield. This design theme also work well with the visual reference I have set. Machine race from Blame, Phantom Core and Borg already has this theme as a common denominator.

This thought is more apparent in the color scheme.

Bigun's paint job on the body was maximized to suit the battle condition. So, since we were pretty clear on what kind of visual we were going for, now, it was time for Karl to start his magic. After providing the information and the visual reference, I let Karl to come up with his first concept design. And this is what he came up with. 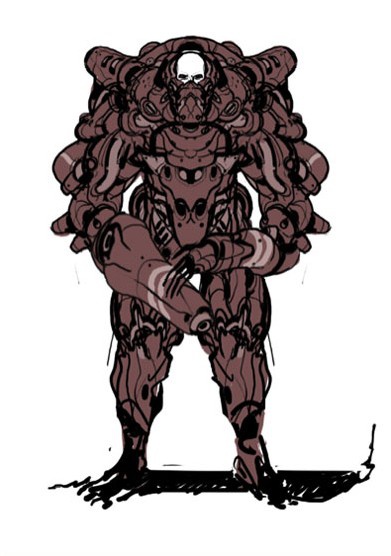 Now, I love this design. Karl clearly understands what kind of design direction I am going for. And I believe his design is unique enough to earn its own spot with the references I've mentioned above. However, there is one aspect of the design I wanted to change. For the 3Dtotal's race, I really wanted to move away from a soft tissue body in an armor look. Even though I wanted to retain the humanoid form, I really wanted to make his body type to be very different. A character with a body that is undoubtedly very machine like. Besides, the contest rule was to feature less than 20% of the organic part shown. So, what is the point of making it look like there is some kind of organic body under the armor?

Another huge point I wanted to emphasize in out design is the clear silhouette of the character. This aspect of the design process is often neglected by so many artists. I personally believe if you have a strong silhouette of the character down, you are done with 50% of the design itself. Not only that, in videogame context, it is crucial to provide the player with a form of a character that is easy to read and define.

In order to illustrate this point, I made this quick thumbnail sketch for Karl. 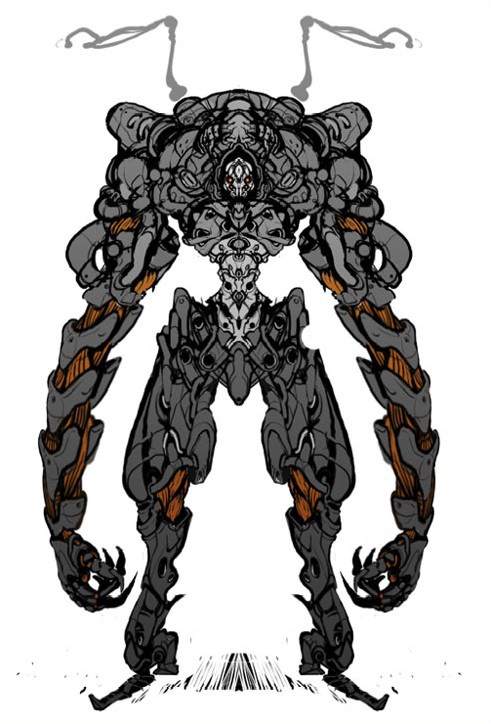 I got to say I love this design. We are definitely almost there. Although I believe this design definitely has all the things I mentioned from the previous note, I felt like it went the other way a bit too much. Now, I don't see any humanity in him. 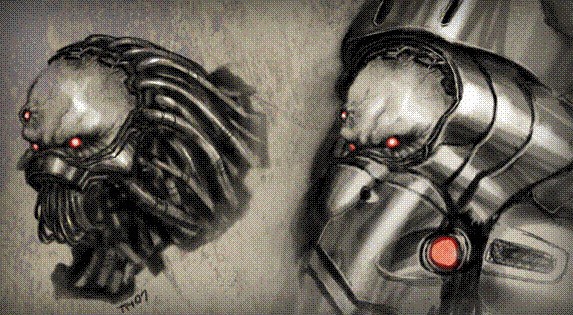 So, I really wanted to put the actual human head back into the design. The idea was that Bigun's organic par only consists of the human brain (that the main control unit uses as some kind of dummy back up system) and the optical sensors. 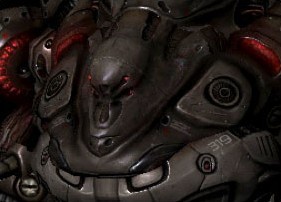 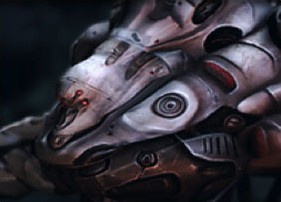 Obviously, it wouldn't make any sense to expose such weak point in the front of the character. So, in combat situation, the face part would retract into the body a bit and Bigun would wear a helmet. 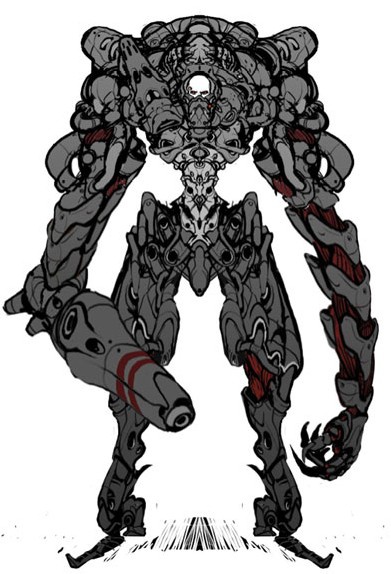 So, after much tinkering and editing, this was the final concept design for Bigun. I don't think I need to add much description at this point. I think Karl's design definitely achieved what I was aiming at. And so much more! 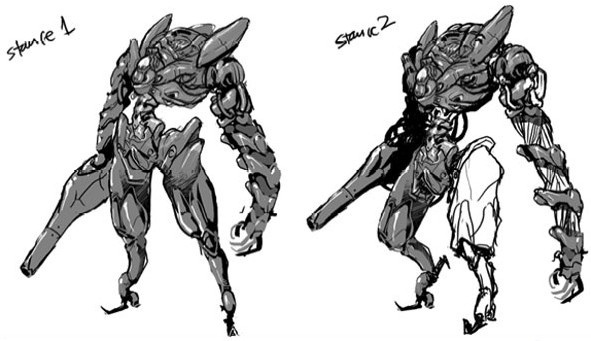 After the design is finalized, all other 2D work was to aid Taehoon for modeling purpose. Due to the time and some other issues, we couldn't come up with a complete character bible with proper orthographic view and detailed sketches. 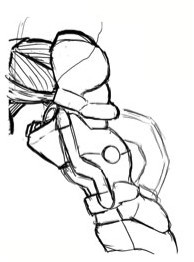 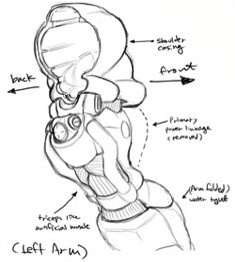 So, much of information Taehoon needed to turn the design into a 3D model were provided in need-by-need basis. 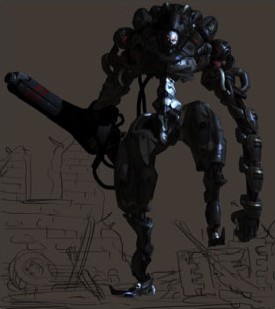 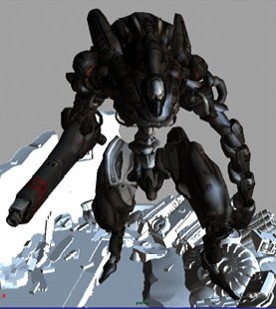 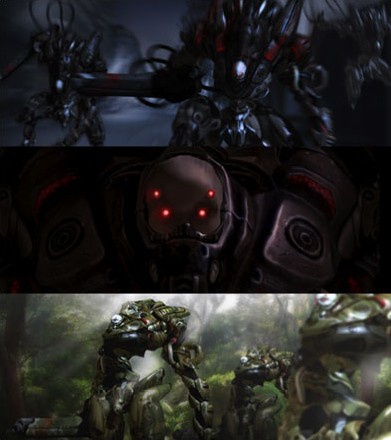 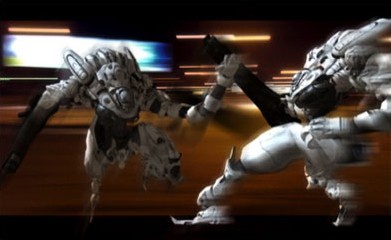 Some ideas were scrapped and never made into the final design mainly due to the time constraint and polygon limit issues. Folding arm idea you see above is a prime example of that. Entire process of directing this project has been a hugely pleasant experience for me mainly due to the fact that two artists I have worked with were very talented and such excellent artists. As someone who directs any project like this, probably the hardest thing to do is to keep inspiring the artists as well as keeping the morale high. But, both artists didn't need such aid. They were incredibly motivating and professional in what they do.

Once the concept drawing was completed. I started a rough lowpoly modeling and there is a 6000 limit for polycounts. And there is extra 1000 polycounts for a weapon. I built up the lowpoly one about 6500 the first, and after finished modeling and texturing, I cut down by 6000. 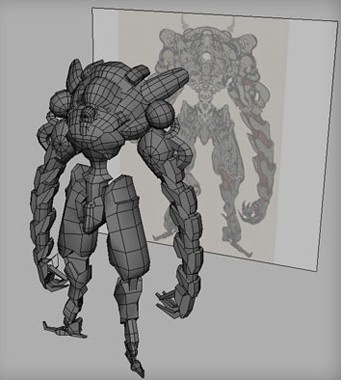 It's a very symmetrical model so I could save texture space later. The Bigun has a lot of details all around of his body. And it's not enough to show his detail through geometric. All we tried to look it complicated is normal map. After finishing lowpoly one, I started an UV layout. 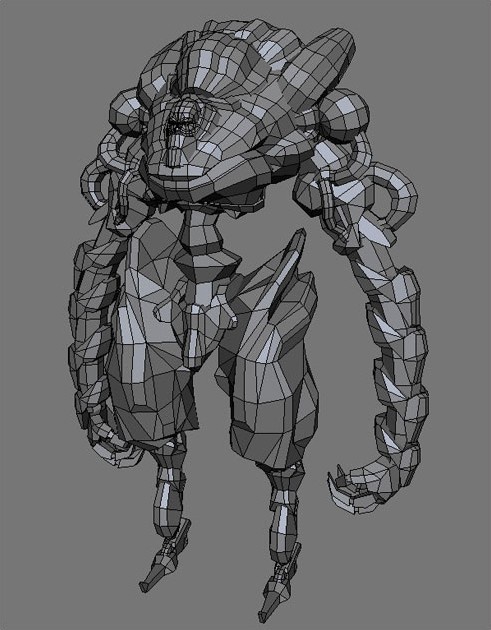 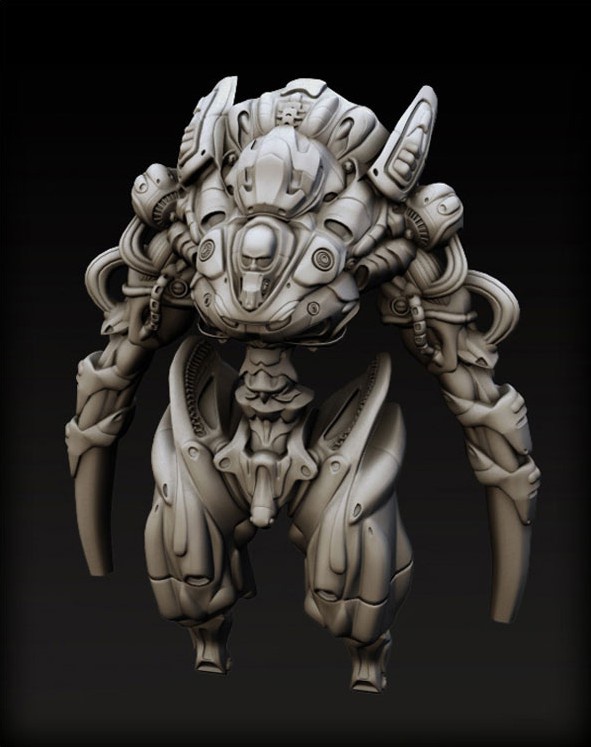 And I started to make highpoly one, I tried to sculpt a high poly model from low one in Zbrush or Mudbox, but it didn't work well with a hard surface model like Bigun. So I decided to make it in Maya using Smooth Proxy tool. It took a long time but it worked well. After I got both, I baked the normal map and occlusion map using the xnormal tool (http://santy.xnormal.net/). It's very simple and powerful. But I had to bake a normal map by piece not all geometric together. After gathering all separated normal map and occlusion, I combined them in Photoshop as one piece. 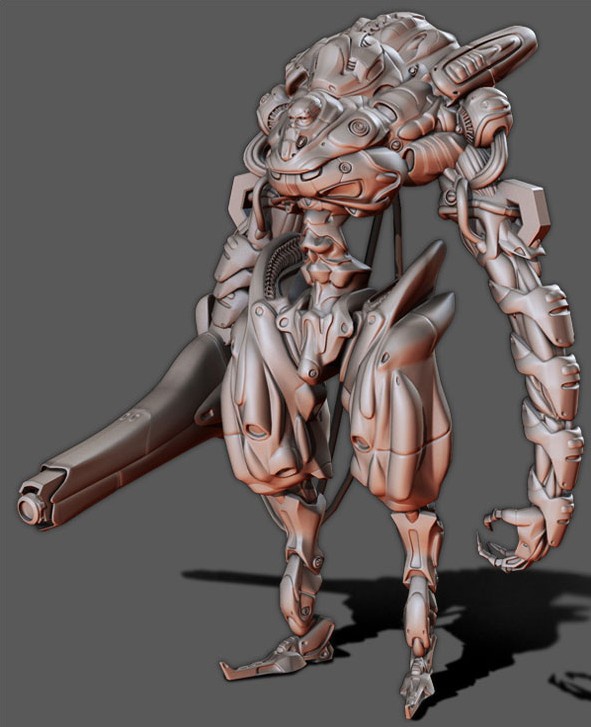 After I created occlusion map from the xnormal tool, I put this one in a Photoshop layer as softlight, it brought more geometric information to color map. And color is monochrome color like black and gray. And I tried to make it shining but paint on metal feeling and dirty. I highlighted every edge on surface and added scratches and oxidations as details. 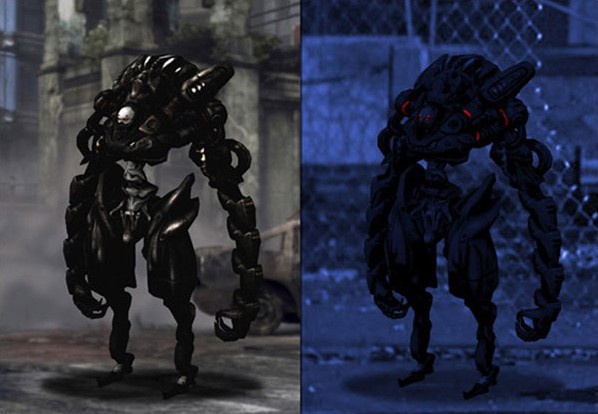 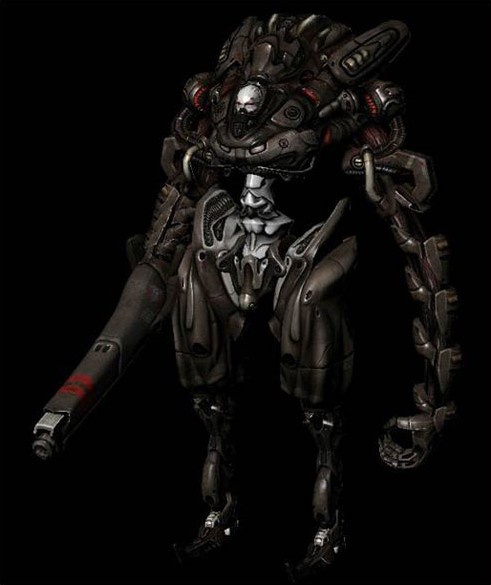 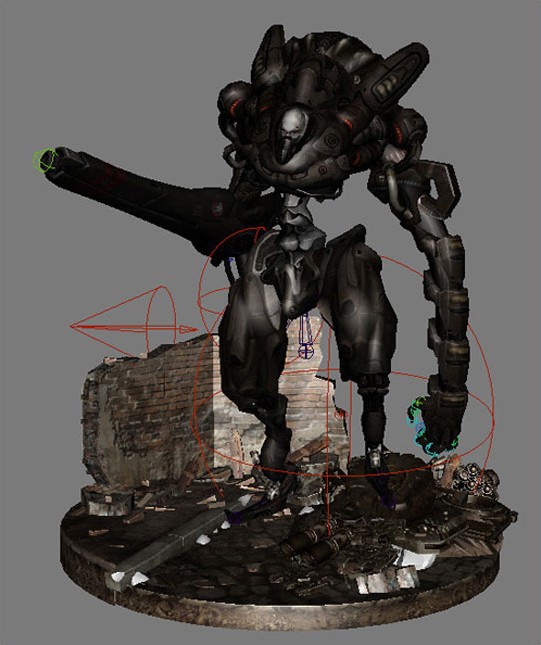 Posing was one of the difficult parts. I wanted to make him more brave and confident look. I tried to changed pose for three days but this pose was the best I and James choose. After posing, I rendered as separated layers like color, spec, occlusion, shadow and depth map. And brought them in one Photoshop file and I did composition. And the Bigun was ready to launch. 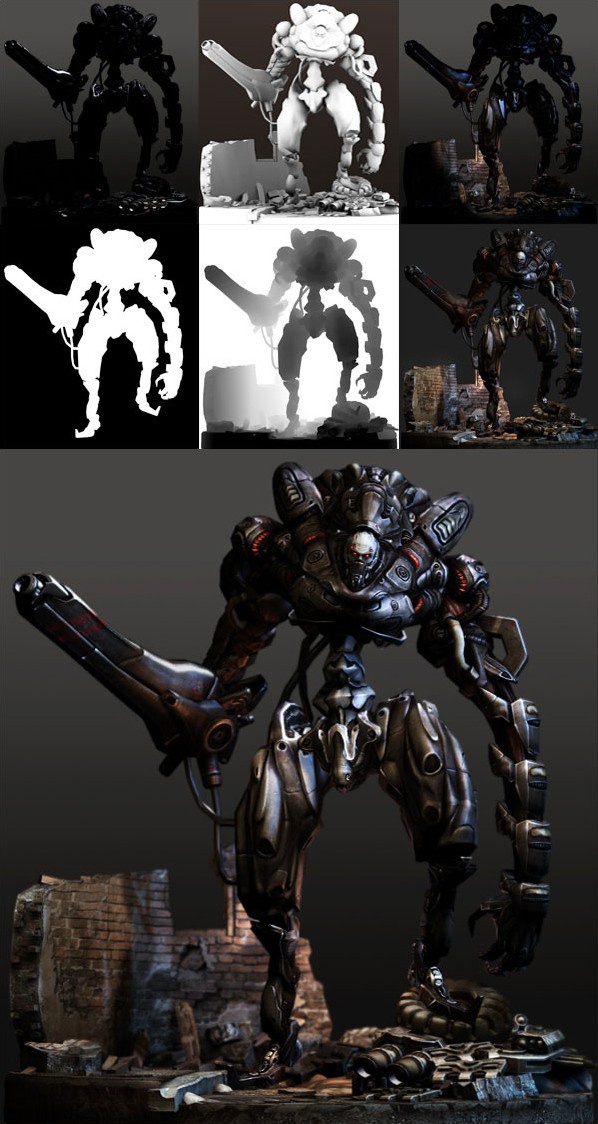