Making Of 'The Ally'

This is my first ever tutorial so bear with me... :)
I wanted to do a scene that was realistic when it came to composition. I wanted it to have realistic texturing, lighting, and modeling. With the 3DTotal Texture CD's, I knew I had one aspect down; just two more to go. 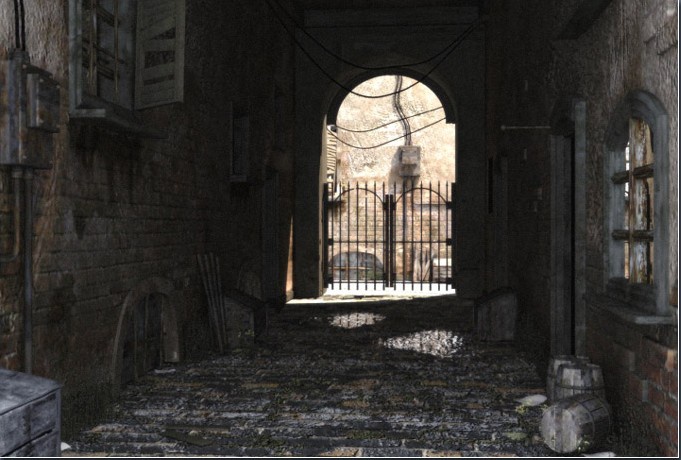 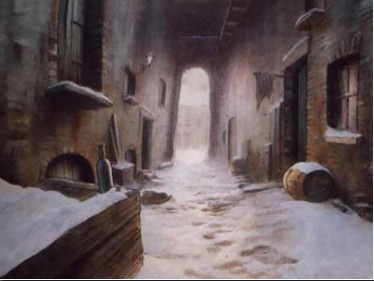 The piece of inspiration


So to start, I had to come up with a scene that was worthy of being recreated in 3d. After some searching, I came across a painted image of an alley somewhere in Europe. I wanted to create a scene similar to this, only done realistically as opposed to being painted. I knew I wasn't going to be able to recreate the painting exactly, so I had to come up with some more objects that would lead the viewer to believe that this was an actual place that could really exist.

So in 3dmax, I began to layout the scene as the painting dictated.

The walls were simple extruded splines, with some detailing around the windows and door frames. Later on I went back and added some fine details like weeds, barrels and some wooden planks. Once I had the scene pretty much modelled it was time to texture it.

This is where the fun began! :o)

Here you can see what the scene looked like before it had the textures applied.

Deciding on which textures to use was probably the hardest part of making this scene. Upon looking through the texture CD's, I found the amount of textures a little overwhelming. 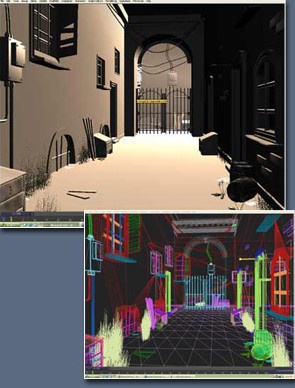 I already knew that I wanted my scene to be mainly textured with bricks and/or concrete.

After finding various textures I could use, I chose these two to be my main diffuse maps for the walls in my scene. One thing I have always noticed with scenes that rely heavily on texture maps, is that their textures are too saturated. So I took the textures I wanted to use into Photoshop and lowered their saturation level; this would give me a more realistic look when rendered.

I also combined these two maps to give me one composite map that looked more like brick being exposed through chipped concrete. After much tweaking in Photoshop I came up with this final texture.

I basically used the samemap for the other walls as well, with a few minor adjustments to it. 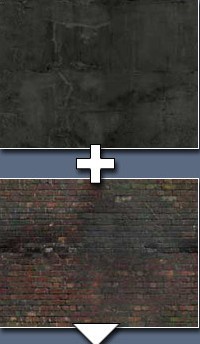 For the bump map, I used the bump maps that corresponded with the two original images I used for the wall texture. In Photoshop again I played around with the layers until I got the desired effect.

The same idea was applied to the texturing of the brick walkway. I took two maps and composed them together using Photoshop. Just by using the clone-stamp tool I was able to copy the moss and paint it on to the brick texture.When these two textures were finally mixed together, I ended up with a texture that looks like this. I wanted a texture that had mossy growth between the cracks of the bricks.

This is what the scene looks like in the viewport when it has been totally textured.

You can probably see from this image that the map does repeat as it goes back into the scene. Due to the way I wanted to light this scene, I wouldn't have to worry about that. 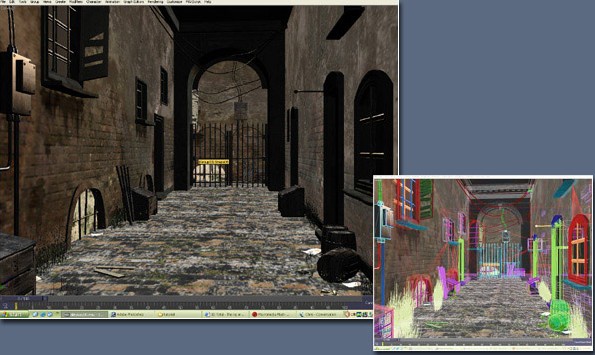 For most of the scenes I do, I try to use lighting rigs and setups that I have created, instead of using GI renderers like Brazil, Final Render or Vray...the list goes on...But for this scene I decided I wanted to run it through Brazil to give it an increased feeling of realism. I chose Brazil because it is the renderer I am most familiar with. Most people think that using GI in your scene is cheating. Even though global illumination does help your scene look better, you still have to know how to light a scene with actual lights.Colour, attenuation, and shadows still require attention when using GI.

And there you have it..my first tutorial! I hope this can help some of you.

Cheers for your time,