First of all I did some quick thumbnail sketches with different poses, which is a really fast way of trying designs out and making a strong silhouette.Â When I was pleased with the results, I scanned and printed out a larger copy of it, then used translucent paper to trace over it with a ballpoint pen (Fig.01). 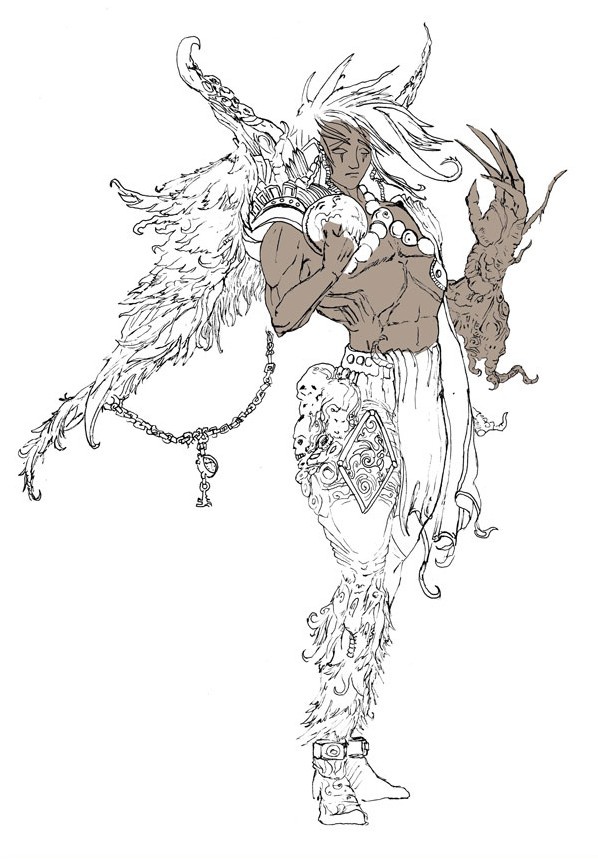 After the final paper sketch image was done, I scanned it into Photoshop, made a new layer (Setting > Multiply), then started blocking-in some colours.Â I tend just to play around with the colours until I find something that I think works and would be fun too work with.Â For the background, I took a big custom brush, set to about 25% opacity, and just went crazy with it!Â  (Fig.02) 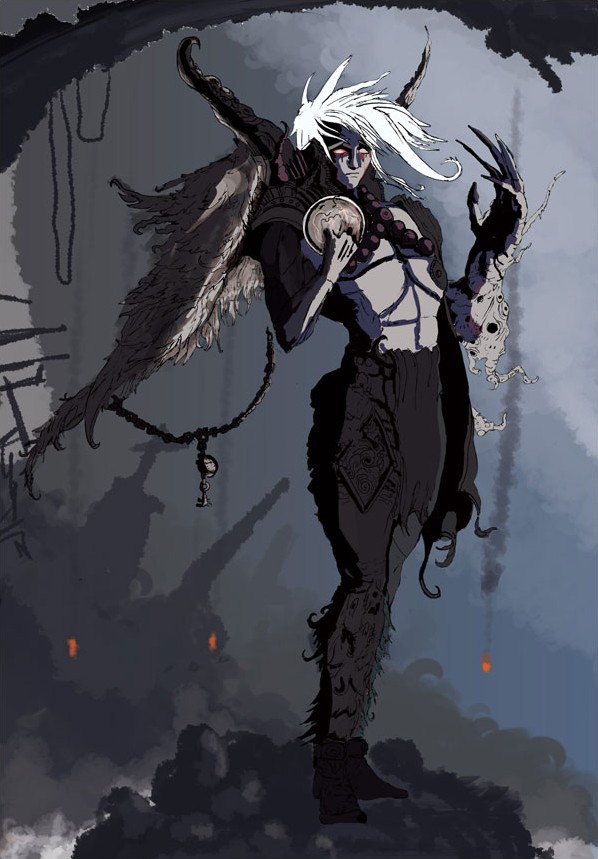 This step I find quite fun actually; here you get the opportunity to describe your forms with light and shadow and, as I tend to do pretty often, come up with new forms and design elements.Â Here, again, be loose with it! Just play around with the forms and see what you like about them.Â Always keep in mind where the light strikes the surfaces so that your forms doesn't end up too stiff or flat!Â I also introduced red into the colour scheme to break it up a little (Fig.03). 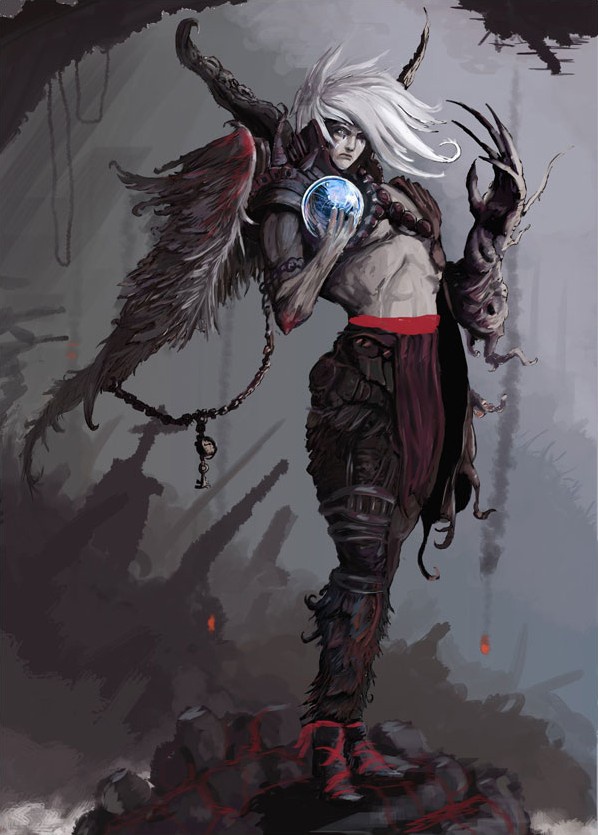 I zoomed out and re-painted lots of the image, and also made some changes to the figure since I realised those armour pads on the upper legs made the character more feminine, which I didn't want.Â At this stage, I didn't know where I wanted to go with the background, so I just played around with some different styles (still staying zoomed out though, as this keeps you from going in and detailing too much, which isn't that important in this early stage) (Fig.04). 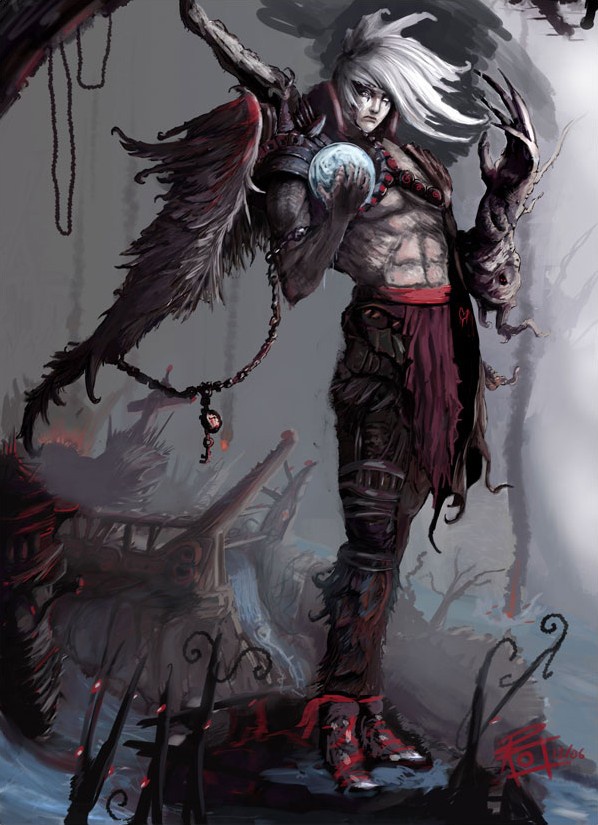 I made some changes to the anatomy and design elements, such as his haircut which I kind of liked before but I wanted to try something new, and I was pretty happy with the result.Â Again, I made some more changes in the background; I wanted to bring more contrast/focus to my character's head, so I made the background darker.Â I added a new light source to the image when I made the sphere glowing, which means that I had this new light striking lots of surfaces, such as his face (Fig05). 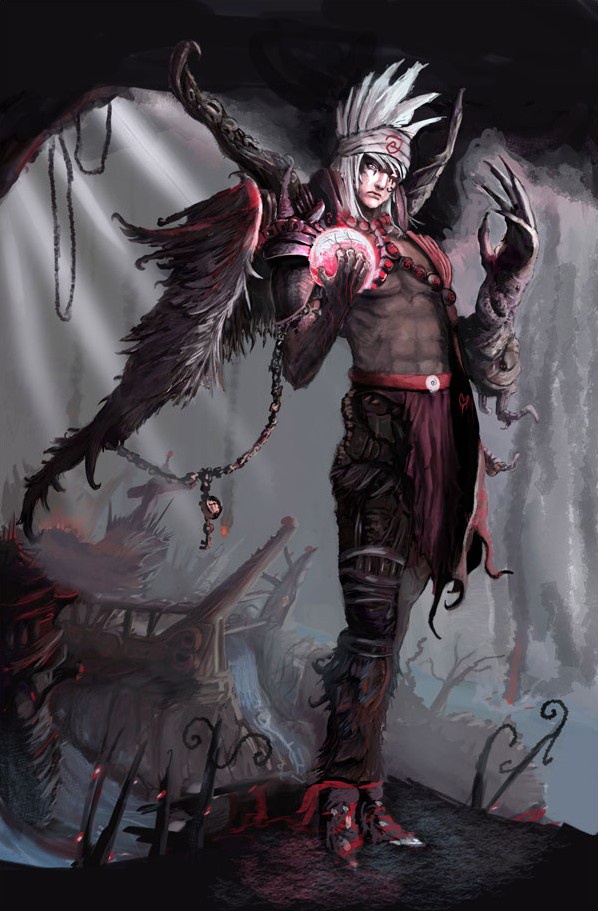 Dramatic changes!Â I wasn't very happy with the background so I re-cropped the image, changed the overall colour scheme (since I started out with a blue scheme and then went more towards a reddish one, I thought why not mix the two together?).Â  Basically, what I did here was take a big brush, with the opacity set to about 30-60% (changing as I went along), with the image zoomed out, and I re-painted the background.Â I refined the details of the image, such as the hair, shoulder pads, wings and the chain hanging from the wing.Â When I make big changes such as these, I always keep in mind the composition and try too improve it as much as I can (repeating shapes throughout the image helps a lot in making the image consistent).Â

To get a nicely cropped result I changed the design of the wings, which also made some new and cool flow lines within the image, resulting in some of the cloth that I added around the character's lower part.Â Again, I didn't want this image to just be a labour where I just follow simple steps, like sketch, blocking-in colours, refining shapes with light and shadow, then keep on refining and refining until it's done... to keep my interest alive throughout the whole process I changed the design a lot!Â For me, it's very important to always have strong silhouettes and good contrast within the image, so this was pretty much what I kept looking for and always kept on my mind whilst painting (Fig.06).

Here I felt that my piece needed a little more depth, so I added some elements in the far background. I realised that the image was squeezed into the frame, so I expanded it a little to the left to balance things out. Since my sphere was a big part of the image, I knew that I had to re-paint it sooner or later - so I did! I wanted it to look like it was somewhat organic, but still not too soft and also with some kind of a shell thing to keep it consistent and not floating away all over the place. Even if I do just a character sketch, I like to put them into an environment and also make it somehow relate to the character.Â Here I wanted more details in the background and enhance the feeling of beauty/evil, which has been my theme throughout the whole image. I added a beautiful cloudy sky, then made it a little stormy and even added some explosions going on to really give the impression that something big is about to happen and that there's some real chaos going on!Â (Fig.07)

Okay so here I knew that I was pretty pleased with the result and that it was time to wrap it up, so I added and refined the last details.Â As you can see, even this far into the image I was still making even more changes to it, which makes it a whole lot more fun to work on! (Fig.08).

This image went through many changes before the final result came out, but this has been one of my personal projects where I've had time to play around with it and enjoy my time as much as possible. Even though I'm having fun, I also take it very seriously, and you really need to think about how things relate to each other all the time (such as colour, light/shadows, form,Â  and so on).Â For me, everything is pretty much about balance... finding balance within everything.Â When I say this, I don't just mean the design or the colours, I also mean the way in which you work!Â Just imagine yourself painting an image and just doing the labour - just refining the forms more and more and adding details...Â  I mean, sure, this needs to be done, but why not play around with it a little as you go?

To see more by Robin Olausson, check out Beginner's Guide to Digital Painting in Photoshop