When starting this image I wanted to create a monster that was integrated with its environment.Â  I began sketching various monsters and ended up with this image which was a type of swamp monster built of wood, mud, grass and moss.Â  After I came up with a decent sketch I browsed the Internet for tonnes of references.Â  I usually make one large Photoshop image with a collage of my sketches and pictures that I find on the Internet to refer to while I build my art. 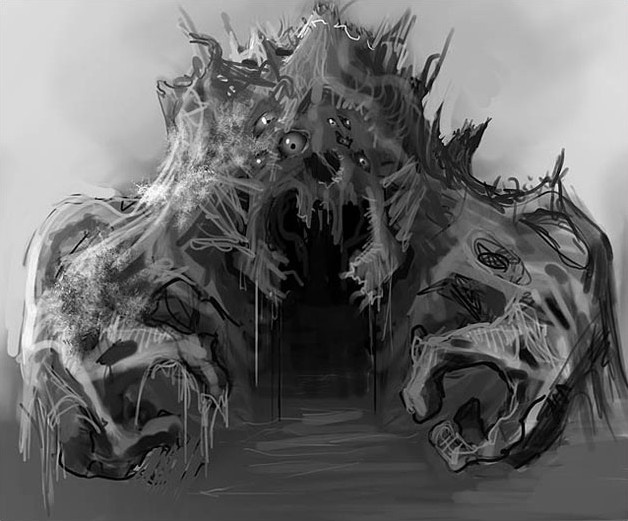 I modelled the base of the monster quickly in Max, only laying out the basic overall shape. Â I brought my base mesh into ZBrush and used various stencils to add mud clumps and cracks to the model. Â After modelling the rest of my monster in ZBrush the mesh became too dense to work with in Max, so I broke the mesh into chunks: head, arms and torso. Â I further reduced system load by processing a normal map to contain the very sharp details so that my working mesh would not be too dense. Once my mesh was UV mapped I brought the lower density mesh back into ZBrush and used Transpose to pose my mesh quickly.

Most additional details like the vines, slime and trees were simple primitives. Â The vines and trees were splines with displacement maps, while the hanging slime and lily pads were planes with a FFD modifier applied to easily deform the shapes. 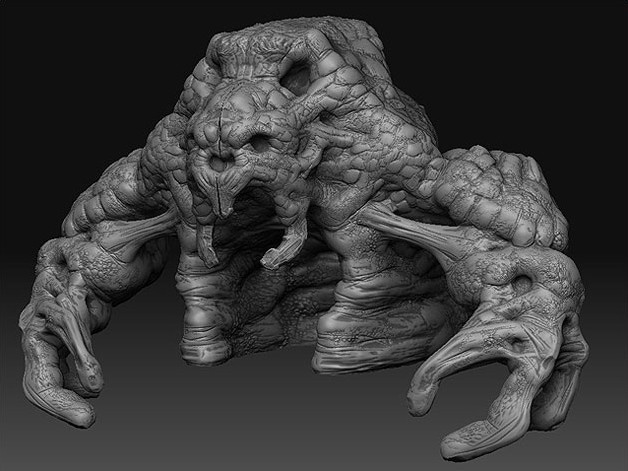 When texturing this piece I mostly used the Total Textures Trees and Plants pack. Â Since the monster was broken into a few chunks I tried to used tiling textures with masks in my Photoshop files so that I could duplicate my .psd files and simply repaint the layer masks for each individual body part. Â In Fig03 you can see that I start with a base mud layer. Â I then process my normal map in Crazy Bump to extract various height maps. Â I lay these over my texture as Multiply, Screen or Overlay depending on what type of detail I'm trying to emphasise. After emphasising the shapes I then layer various grasses and ground textures. 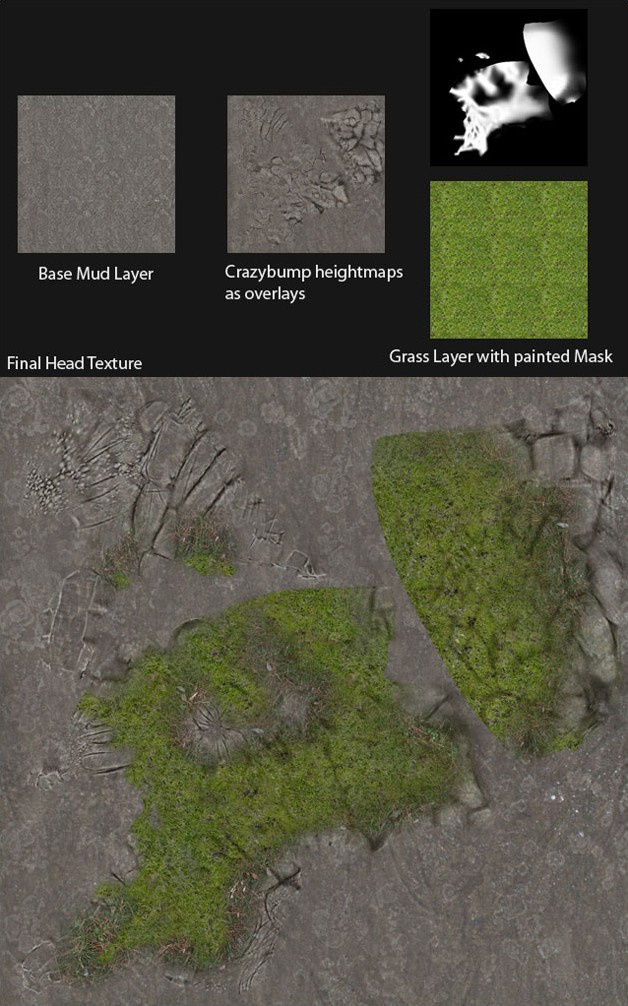 To create the textures for the bark on the trees and the vines wrapping around the monster I layered various barks and wood grain and created tiling textures that could be repeated on a spline. Â I then copied the diffuse maps to be greyscale, adjusted them with curves and painted additional depth details on them to create their displacement maps. This helped cut down on a lot of modelling work, although it did increase my rendering times. 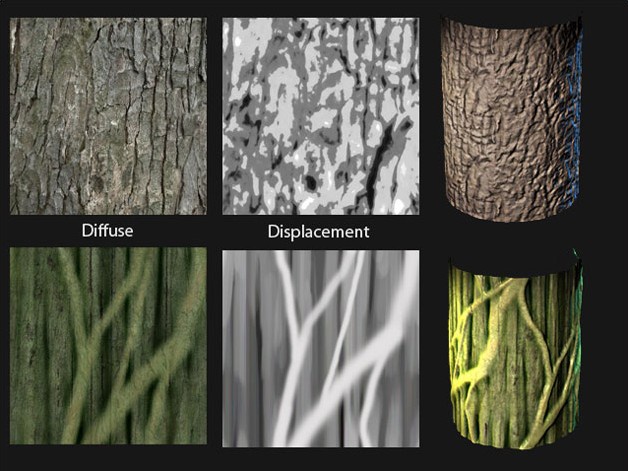 To make the monster feel like it was a part of the environment I created a lot of dripping and connecting spline textures. The diffuse maps were simply grasses and grime overlaid on top of each other. Â Their displacement and opacity maps were hand painted in Photoshop. 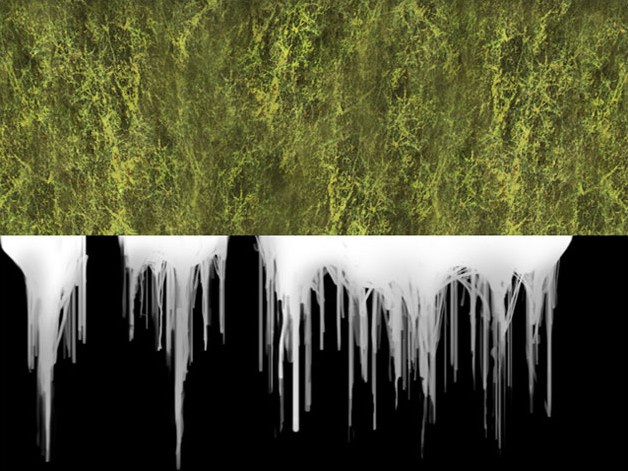 When creating an image like this I usually create 5-10 cameras in angles that I think will be interesting. Â I'll render these out in low quality and compare them side by side to help pick my final composition. 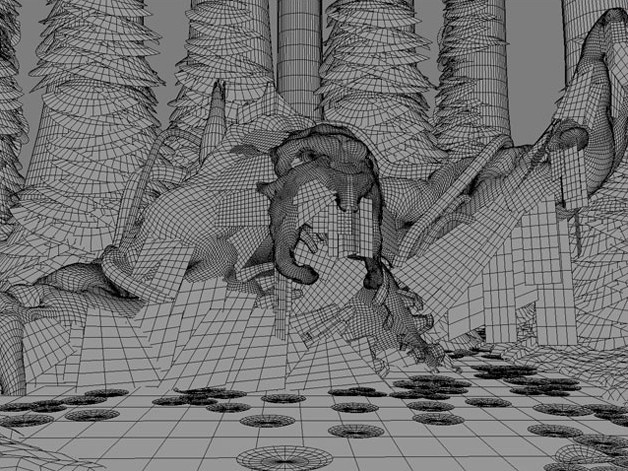 After picking a final camera angle and aspect ratio I'll begin to light my image. Â All lights were Spot lights with quick falloffs.Â  A few of the Spot lights had thin rectangular shapes. Â I used this to help highlight the back of the monster without bleeding too much light onto the trees behind it or the water in front of it. 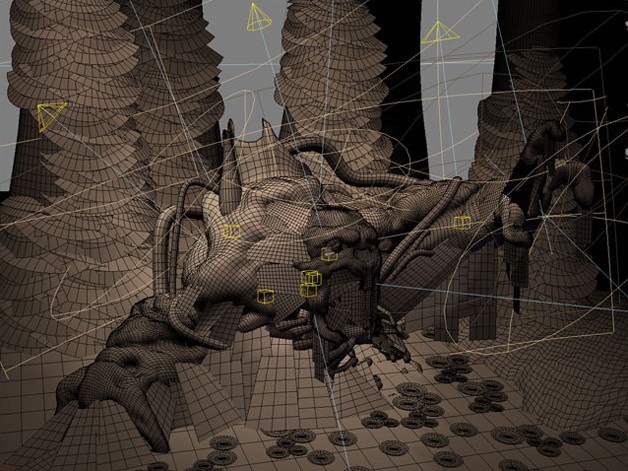 In Fig08 the top left image is the one rendered in Max using Mental Ray. Â I usually render as many passes as possible such as fresnel, ambient occlusion, and a separate reflection pass. Â This helps tweak things in Photoshop which is a lot quicker than waiting for a render to complete. Â In the top right of Fig08 you can see the addition of depth of field and the various colour and lighting adjustments that are done with curves in Photoshop. Â The particulate and sun rays that you see in the bottom left of Fig08 were hand painted in Photoshop using custom brushes that scatter and rotate a shape. Â Finally, the splashing waves in the bottom right of Fig08 were overlays from waves splashing at the beach. 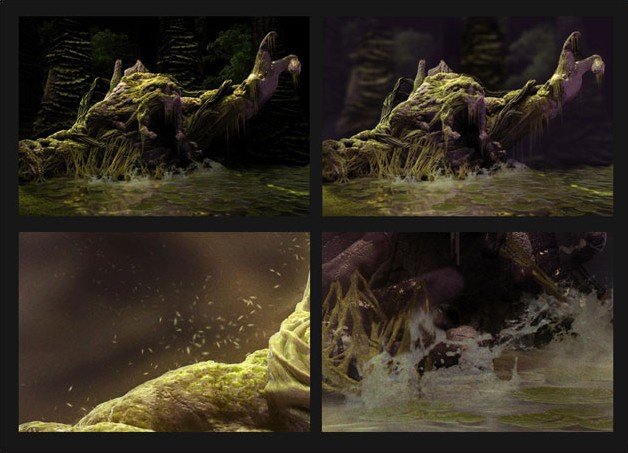