Many artists keep their colour palette in a separate window, but I've never worked like this.Â  I sort of feel my way through as I go along, instead. My sketches are always very dull; rather than worrying about finding every colour I need right away I let them build themselves as I go. But for this piece, I wanted similar colours as to the original photograph - greens and yellow, accented with red. I blocked in all my colours with a custom round brush. The figure was on a separate layer to the background. All work was done in Photoshop 7.0 (Fig.01 - 02). 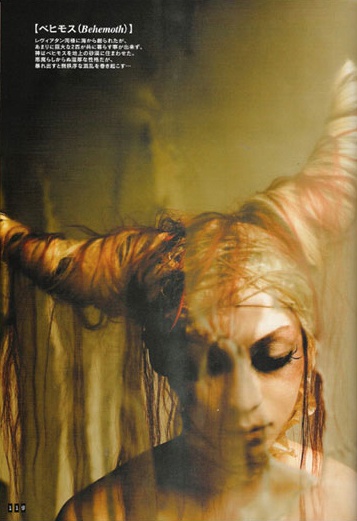 Here's where I took my initial ugly sketch to see if I could turn it into something decent. I had a good vision of what I wanted so I didn't run into too many problems. This stage was mostly about cleaning up the sketch and getting a feel for the image. The torso was the most difficult part of this painting. I took my own reference for the basic pose and hands, but then I had to dig through my folders of stock models to find pictures of male torsos with similar lighting. It was a lot of trial and error. Normally I work on one section at a time until I'm finished, but the torso was a constant work in progress throughout the making of this painting (Fig.03).

It's very important for my sanity that I get everything in place before I start detailing. I wanted this piece to be very lush and evocative, but it was too stagnant. So, I created a third layer and painted in flowing strands of cloth to create visually interesting angles, add a sense of depth, and bring the composition together. I also started refining the anatomy a little - bringing shape into the torso and starting to detail the face. I now regret not distancing myself from the original photograph more; although I did not follow the original image exactly I still wish I had come up with a way to alter the design of the headdress myself. This was also the point where I enlarged my canvas to its final size. I sketch at a lower resolution - around 2000 pixels long, at 300 dpi. Once I'm ready to start detailing, I enlarge my canvas to a more comfortable size.Â  For this painting the final resolution was 3500x7000 pixels, at 300 dpi (Fig.04).

I was then ready to detail my heart away. This is my favourite part. I started fleshing out the figure's arms and hands, trying to perfect the gesture, and strengthened the lighting on the figure. I wanted an ethereal glow to his skin. I also began to work on the background. I tried to work back-to-front so that all my colours matched up the way that they should, and so I didn't lose the mood. Here the background was very simple: colour sloppily brushed on to get an idea of the contrasts, and then overlaid with different custom texture brushes. Then I went back in and hand-painted (with a very small round brush on low opacity) over the texture base to achieve the final look. I used a lot of layers whilst doing this - for each major change I made to the painting, I created a new layer. That way, if I didn't like it, I could delete it and try again without ruining what I'd already done underneath. When I was satisfied with my changes, I flattened the layer down and then created a new one for a different section. In this way I never have too many layers going on all at once (Fig.05). This was also where I started worrying about my colours, slowing pushing more richness and saturation into the piece as I went along.

It's was then time to detail the figure, which meant correcting any anatomy flaws and perfecting the pose as best I could. I finished up the torso and raised hand, re-sketched the bowl, and fixed the angle of his lower body to create a better visual arc. I started detailing the headdress and re-thought the way the cloth would wrap around his body. I also decided to make smoke coming out of the bowl instead of flower petals (yes, those little dots in the previous steps were going to be flower petals).Â  Amorphous things come easily to me, and I thought it also added a more unique touch than something clichÃ© like flowers petals. The smoke is on the same layer as the cloth strand in the foreground. For skin-painting, I used custom round brushes with textures embedded in them, and a few "speckled" brushes. Both of these blended colour beautifully without smoothing things out too much. I painted with a very low opacity, which was almost like glazing with oil paints (Fig.06).

This is when the whole thing started to come together. I finished up the background on the lower half of the painting, as well as the lower hand and bowl, and started pulling the colours together better. The way I did this was by creating a new layer and lightly brushing a colour over an area, then lowering the opacity to almost nothing, and flattening it. By doing this over and over again, it created a very beautiful rich glow to the colours which unifies them and makes them seem rather other-worldly (Fig.07). I finished up the cloth around his legs using the same method as the skin, and then went over with some soft brushes. The blurred effects in the headdress were achieved by using a soft round brush with very low flow and medium opacity, then some parts were painted over again with a smaller soft brush with higher flow. This is a great way to create blurs by hand.Â

Just a few were then left now... I painted in the smoke and finished up the cloth in the foreground using the same blurring technique as before. I then made several very small alterations throughout the painting, tweaking little details to make the picture pop; a few more strands of beads here and there, and more prominent make-up on the figure's face, and I was done (Fig.08).