Whenever I create an image for myself, I'm looking to explore the pure abstract qualities of art. For a job there are constraints; the image needs to fill a need or illustrate a design. But when I sit down to do something for myself, I want to go for a ride where I'm not sure of the destination. It's exploration. It's undiscovered territory. It's the whole journey versus destination thing.

I started this image by making a page of random scribbles to see what suggested itself. I worked in a medium value with only a few tones. Some of the greatest American illustrators like Mark English and Bernie Fuchs would plan their images like this. The strength lies in the design, not the rendering; that comes later (Fig.01). 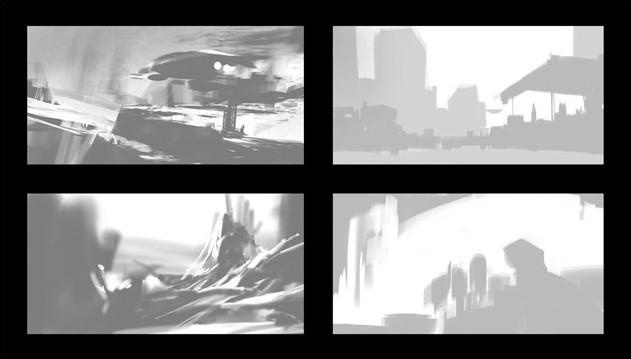 Once I'd picked a design, I refined it a bit more and add a little more value. I also added a few details that suggested size and scale (Fig.02). 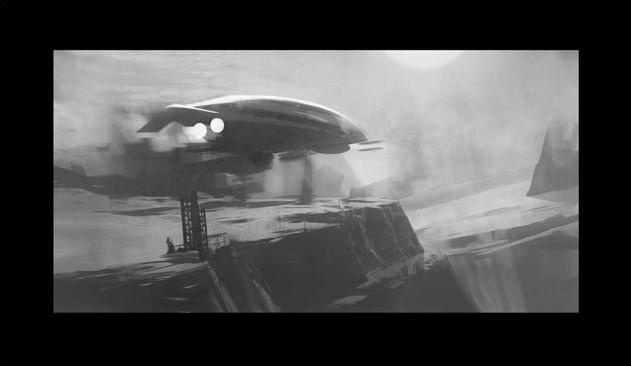 Once I was happy with that I needed a little color. Since this image was going to have a fairly monotone mood, I was able to work in overlay and color layers to glaze in the hues. If the image had been outdoors and in direct sunlight then I probably would have blocked out the color in flat tones to get the modulation that comes from real color and light interaction (Fig.03). 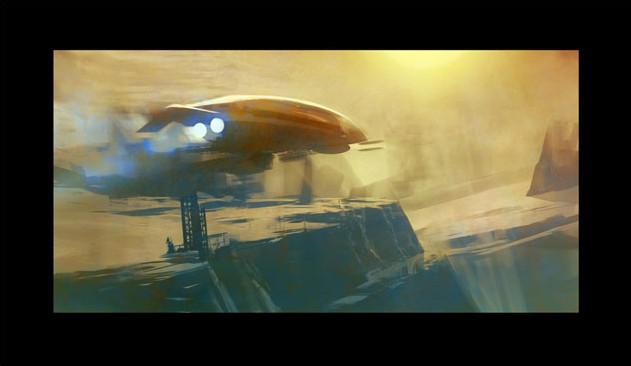 Next I needed some textures. I overlayed a few photos to help suggest some detail. This is a fast way to get some complex looking things to happen, but I want to stress it's only a beginning. I overpainted a lot of hand drawn detail so that the image didn't just look like a bunch of photos in overlay mode (Fig.04). 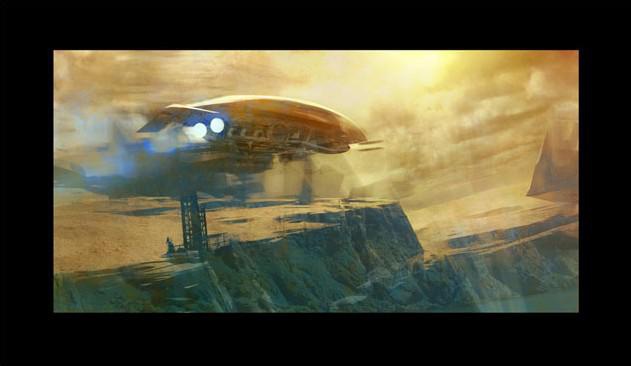 The photo will only get you so far. Now I moved on to correcting the drawing, carving out larger planes and facets into the cliffs and adding some detail to the ship side. This is the stage in an image where drawing and perspective are crucial. You, the artist have to make it work. The photo will only get you halfway. If you can't draw, this is where an image will start to fall apart for you (Fig.05). 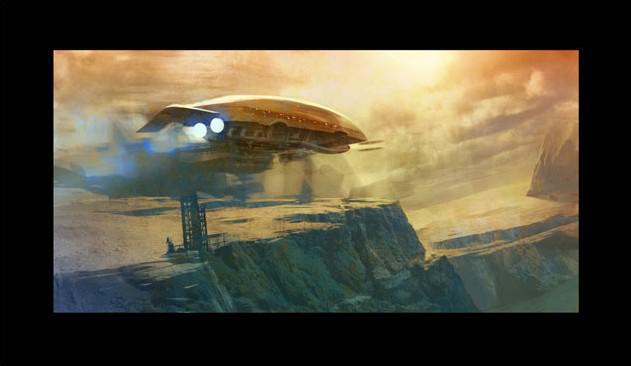 Next I added more detail to the ship, which was all hand done. I also added a band of clearer sky near the horizon and started to detail out the edges of the cliff. I kept my main design but refined the drawing. In the close ups you can see the loose brush strokes of the block in and then the more tattered torn edge I got later by reworking it with a scatter brush (dynamics turned on) (Fig.06a - b). 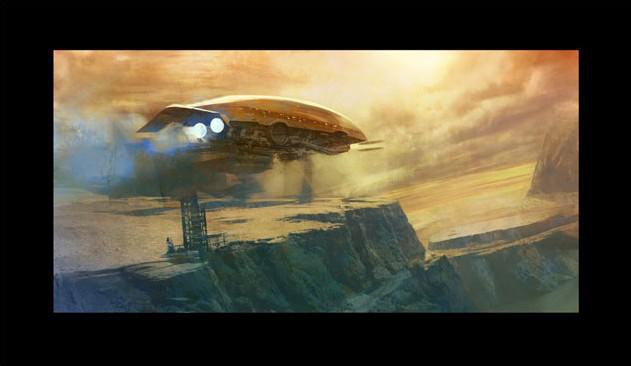 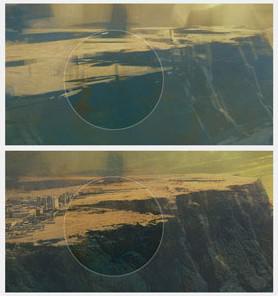 I needed to address the very ambiguous edge of the ship itself. This idea was working in the sketch but as the image got more refined and finished it wasn't working as well. I made a path and carved out a cleaner edge to the underside of the ship. I also made a few more mesas, pulled out the lower cliff face and added waves to separate it from the water. When I say "pulled out" I mean making a quick selection and doing a transform/warp. That way I keep all my drawing, but modify it so it fits in with the overall perspective better. I also added a few more windows to the ship (Fig.07). 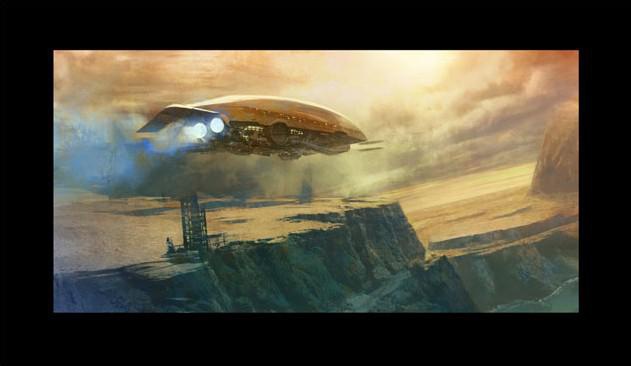 I made some value adjustments and added some clouds in the upper right. The plane of the sky is just as important as the ground plane in giving an image depth. Adding some larger cloud shapes it and reinforces this (Fig.08). 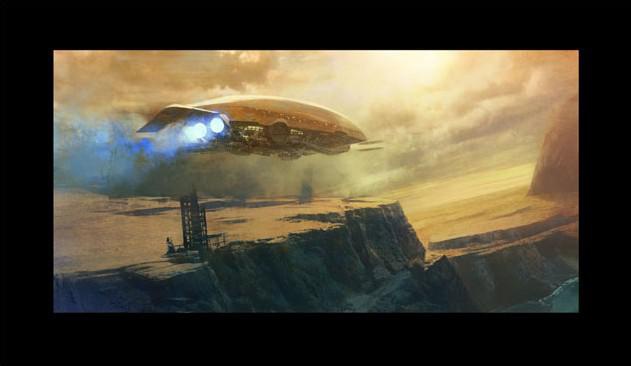 The ground seemed so bare that I ended up adding a city to break up the flatness. The ship was coming together and that revealed the blandness of the ground. I was careful to make sure the perspective of the streets and buildings conformed to my established perspective. This is the difference between a good and great image. It's taking the time with the details that makes a piece look professional (Fig.09a - b). 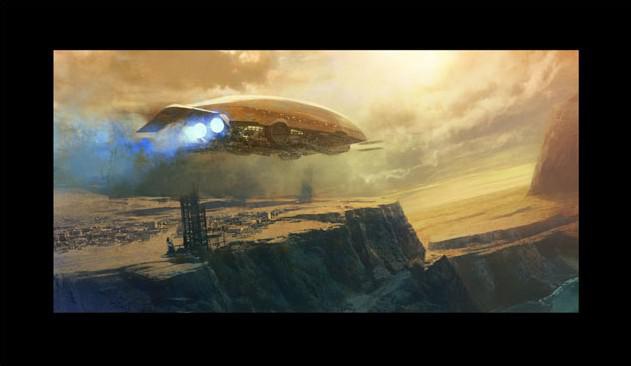 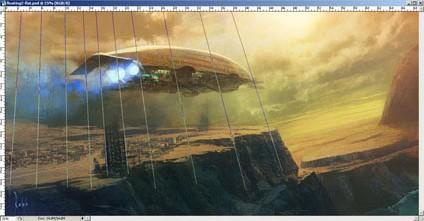 The side of the ship was looking a little too simple so I found some images of ocean liners and warped/transformed them to fit into my shape. The scale was working better after that I think (Fig.10). 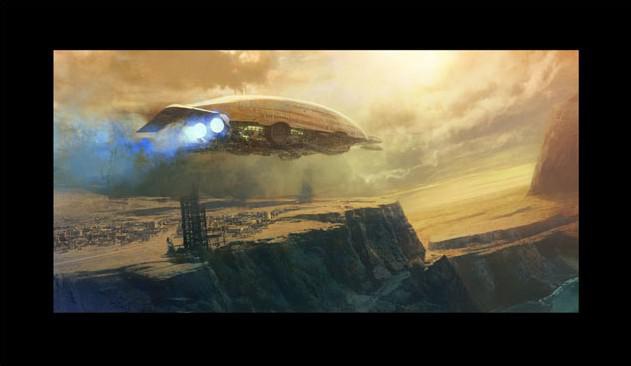 I finished by adding more lights under the ship and some subtle warping on the underside of the ship's cowl. Then it was time to sign it and move on to the next one... (Fig.11). 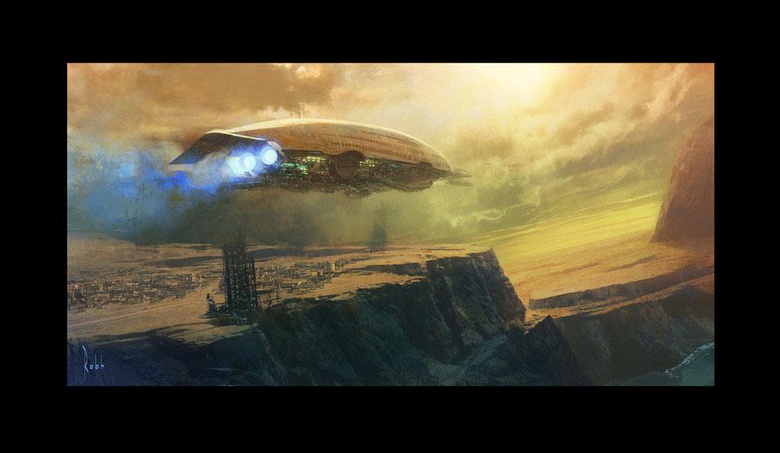