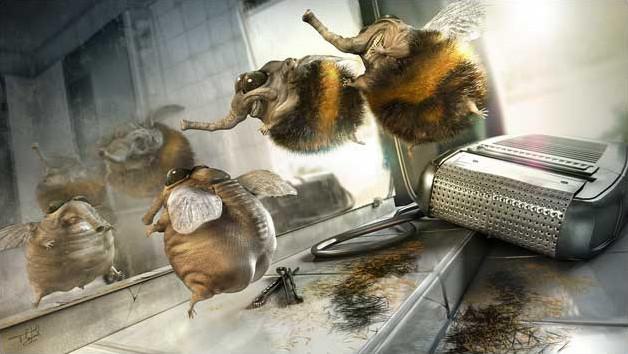 "The Shaved Bumblebee" is a computer generated image created by Till Nowaks to participate in the "strange behaviour" contest of cgtalk.com in October 2007. It tells the little story of the bumblebee Bernard who wanted to impress his friends with a funny experiment. It was one of these boring days, when they were as usual looking for some adventure or monkey business to get involved in, when the three bumblebees managed to switch on an electric shaver. And Bernard, for the first time in his life, completely freed himself from his beautiful yellow and black fur, under the shouting and cheering of his friends. But then he watched in the mirror and had to recognize that the result didn't please him as much as he expected. But hey, it will grow again....

The production started with a simple drawing. I usually start to work directly in 3D, without any sketches, but in this case the contest rules enforced the classical and professional workflow which starts with a scribble. 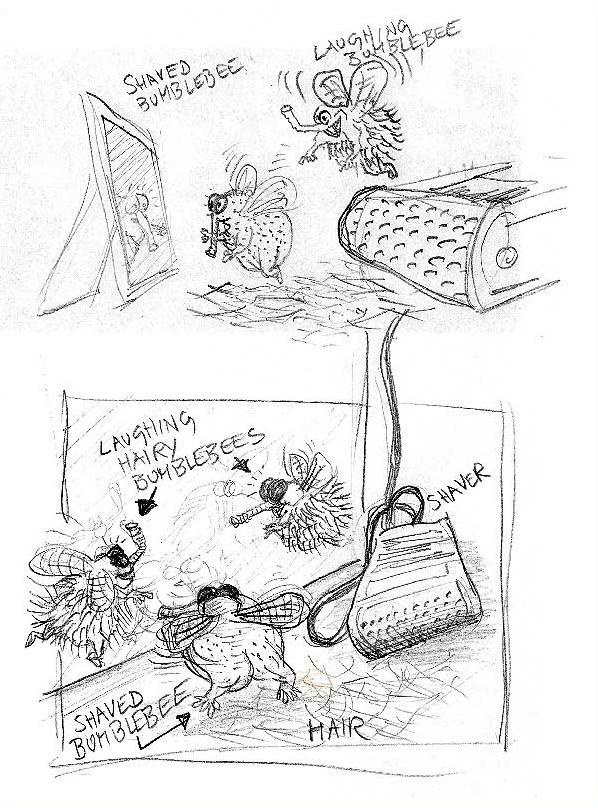 Then the bumblebee character was designed in ZBrush and a first test composition in 3ds max was done. The naked bumblebee was born... 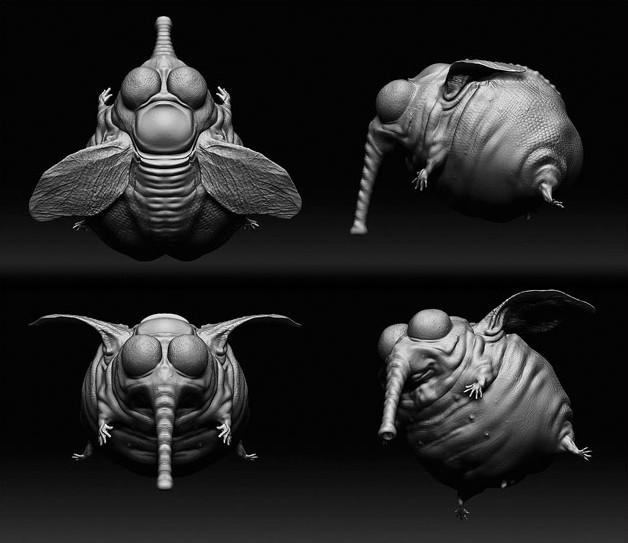 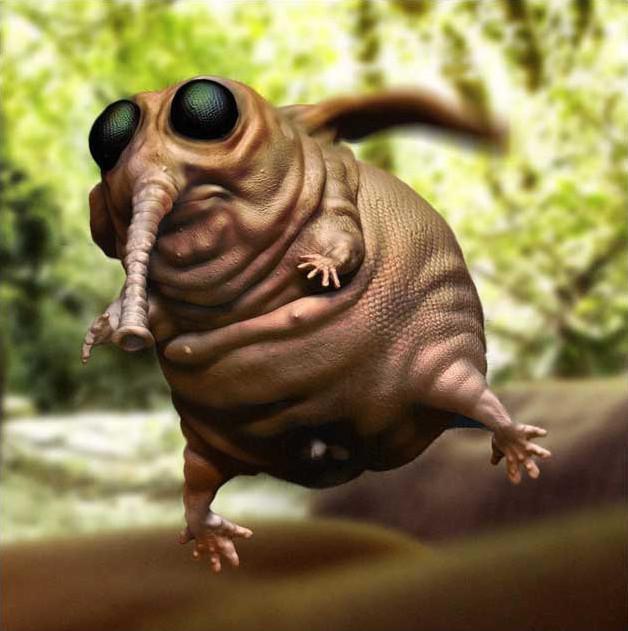 This is the pure rendering from 3ds max. 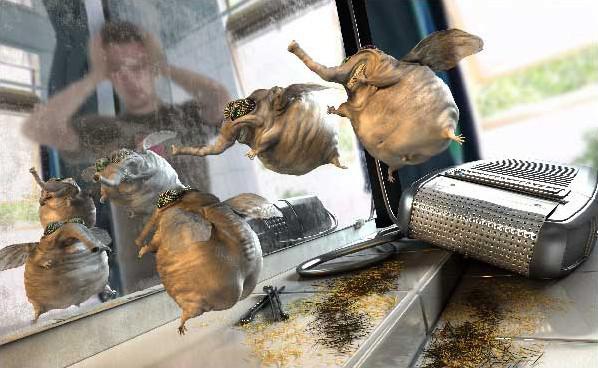 This is the final result after all the editing. 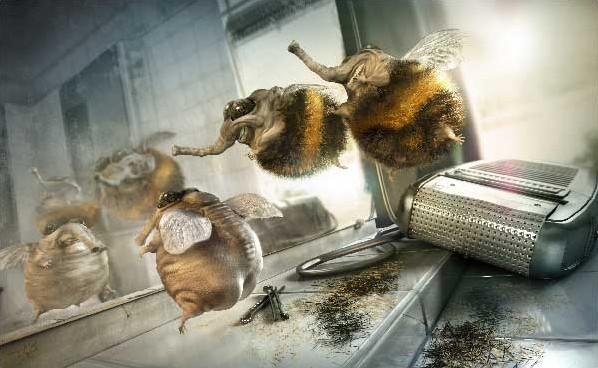 Here you can see all the parts that were replaced during the editing. Almost no parts from the original rendering survived. 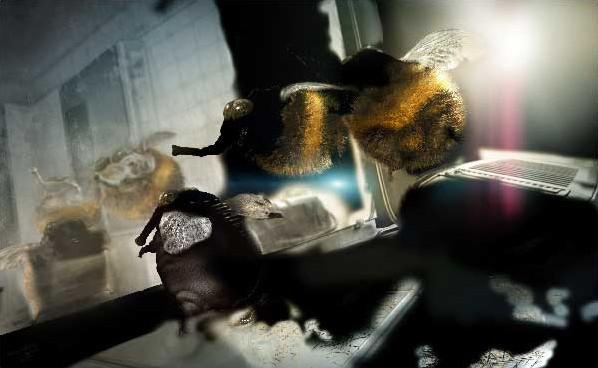 The background in the mirror was replaced with a new partial rendering. 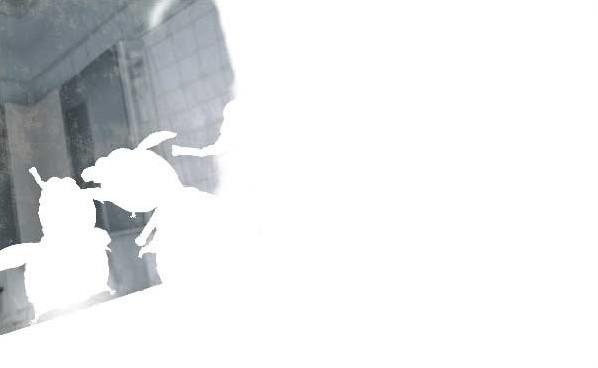 The fur was rendered separately and needed a lot of editing until it was matching the lighting of the scene. 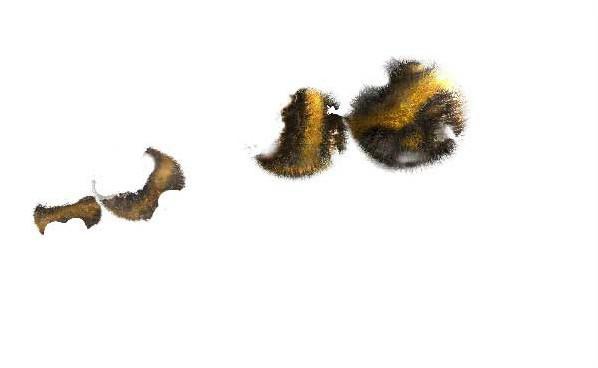 This manually drawn layer was used to create the steamy and dirty feeling on the mirror. 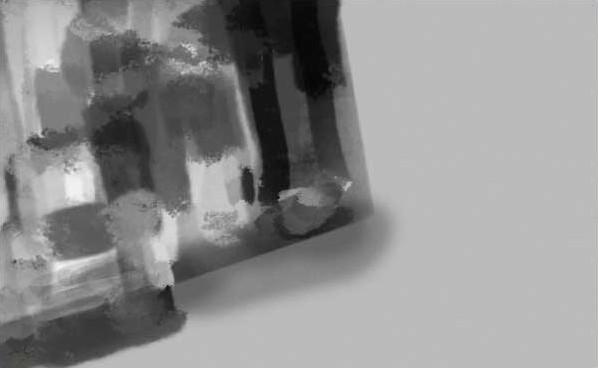 The image was partially darkened, especially towards the outer areas, to create a more focussed and suspenseful mood. 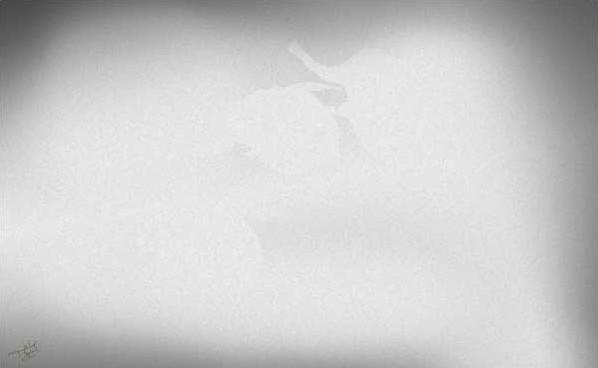 This layer with a diagonal gradient was used to create an overall colour scheme of warm and cold colours. 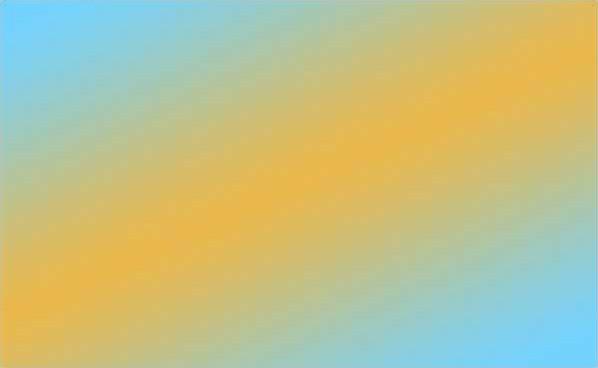 These areas were manually blurred. The depth of field was created manually to create a more individual and intuitive focus. 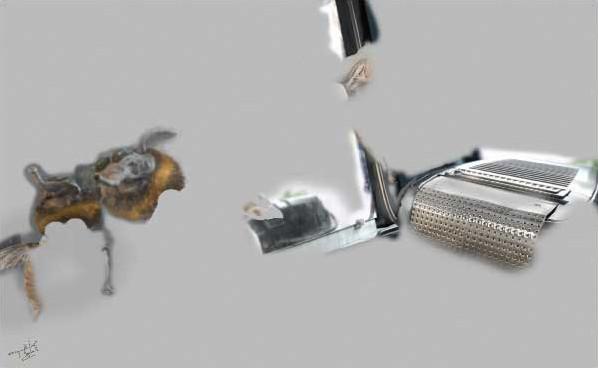 In order to create a Sunday morning mood these lens flares were partially blended into the image. 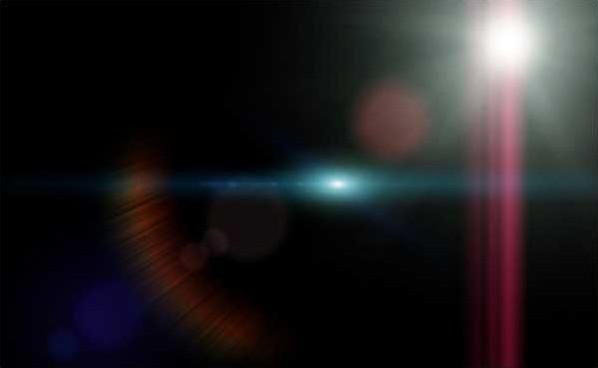 Cracks were extracted from photos and mixed into certain parts of the image to break up the digital regularity of the wall and tiles.

Many layers of manually brushed colour, luminance or blur corrections were used to lead the viewers focus into certain directions. Logic and realism are sometimes less important then the overall mood and focussing of a composition.

Pieces of 2D textures were partially blended to add more detail to the materials. This could have been done also with better materials in 3ds max, but when you are creating a single still image instead of an animation it sometimes brings more freedom to do it this way.

A photo of a real elephant trunk provided additional detail.

The fur was rendered with 3ds max standard fur tool and needed a lot of editing to match the scene lighting, for example the manually added highlights on the upper right area of the fur.

The wings were replaced from an insect's photo. I had used the same photo before to create the texture, normal map and opacity map, but the 3D object just didn't want to behave like a real insects wing so I chose the Photoshop way.

The eyes were overworked with blur and colour enhancements and a painted white highlight. On the teeth I brushed thin white lines to make them glossy and more visible.

After the first rendering I went back to ZBrush and added more detail. I had memory difficulties to export the 4K-normal map I wanted, so I used ZBrush's 2.5D mode to add more detail and composed it all together in Photoshop.

In certain parts I painted glossy highlights, like here on the back of the shaved bumblebee.

Every Photoshop and compositing artist has his own way of arranging and working with layers. In this example the use of opacity masks was very important. Also the different transparency options of Photoshop like multiply, screen, negative multiply, light, darken, etc. are very important tools. For the correction of small rendering errors I like to add an empty layer and use the "smudge" tool with the option "use all layers" activated to create corrections only on the new empty layer and still be able to reverse every single step. As often the work in 16 Bit mode became important in this piece because of working with many colour and level corrections to avoid artefacts. Besides all of the detail tweaks the most important layers are in the layer set "overlay" which defines the overall mood of the picture. 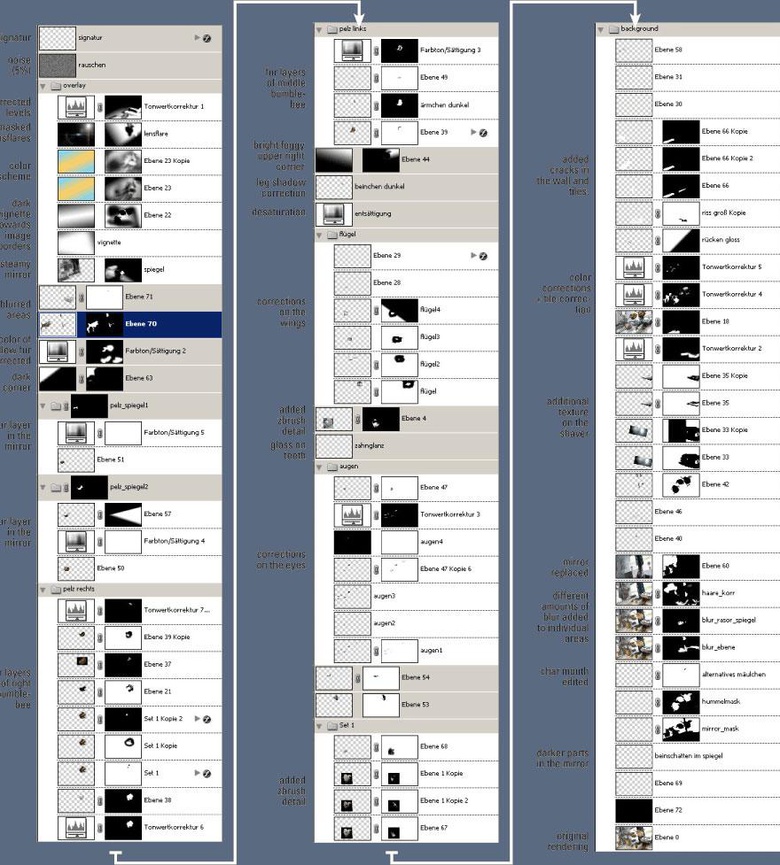 These screenshots show the actual proportions of the 3D scene. Several VRay lights and GI was used. For the hair lying on the tiles I manually arranged groups of cylindrical models and copied them next to each other. 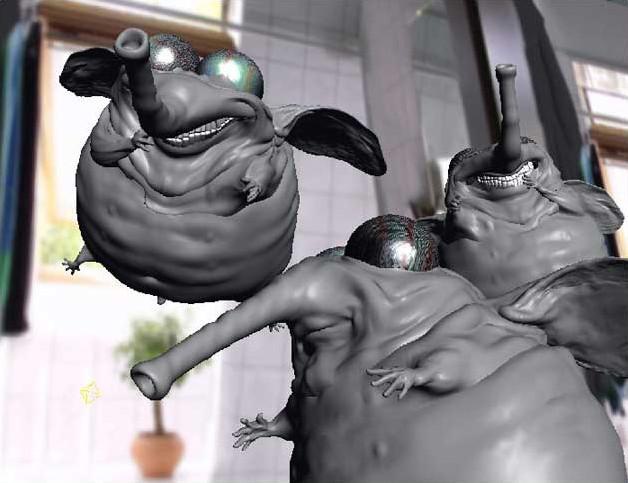 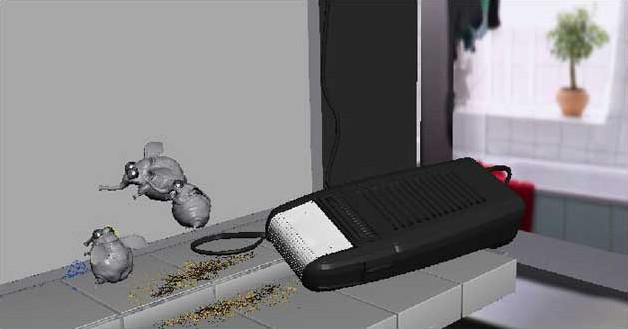 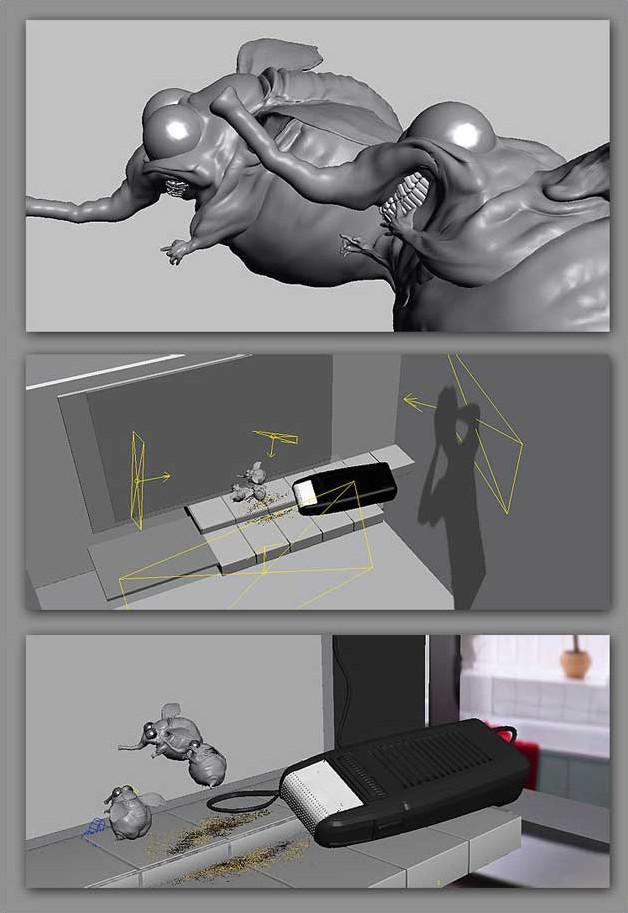 The fur colour was defined by this yellow and brown texture map. 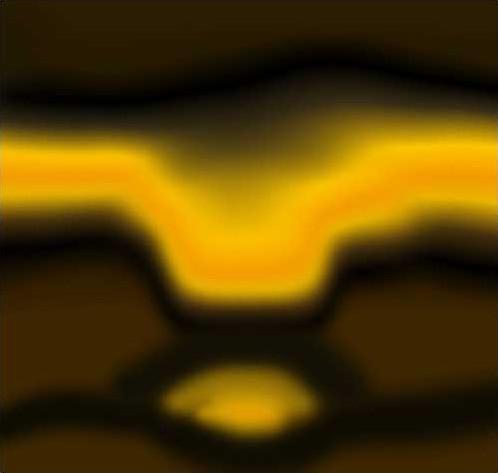 For the bathroom background I used an edited photo of a bathroom. 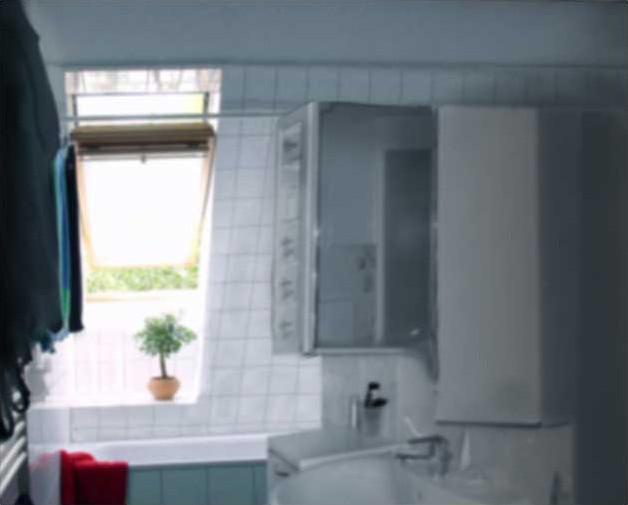 And here is the final image. 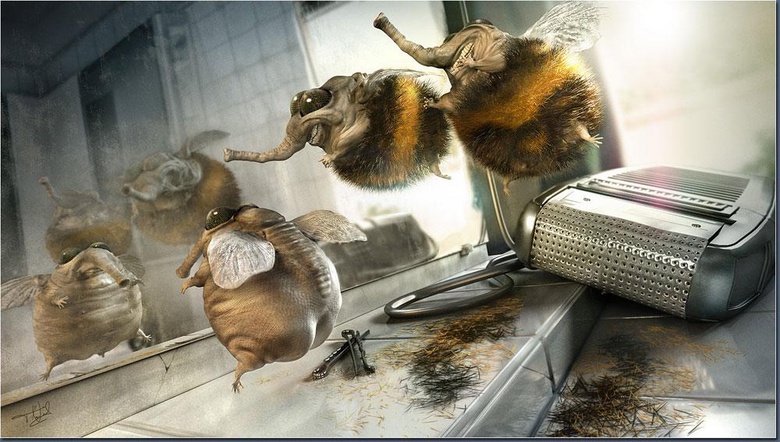 Thanks again and I hope you enjoyed my making of.

Till Nowak is working as a media artist since 1999 in his own studio in Mainz, Germany. Visit framebox.com for more work and background information 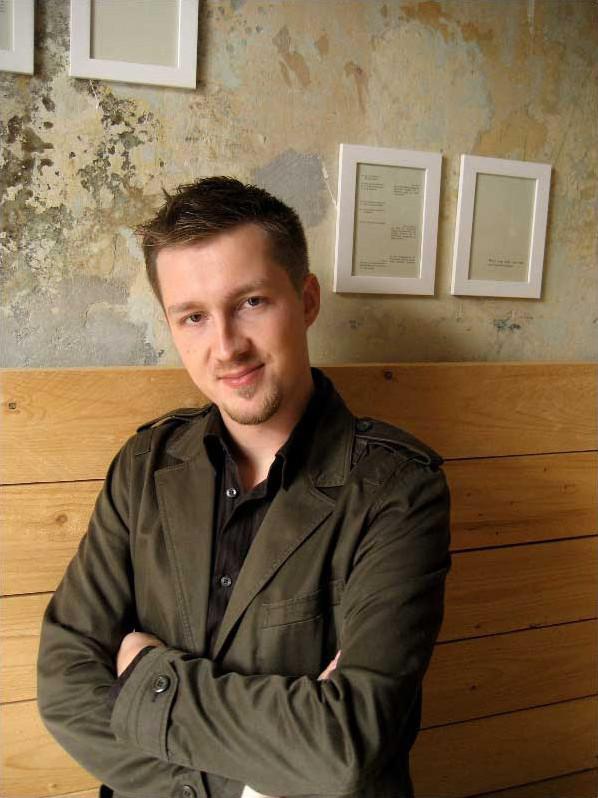