Hi, my name is Francesco Corvino. I'm a concept artist and digital matte painter from Italy who is currently working in Hollywood at The Aaron Sims Company.

In this Making Of I will show you step-by-step how I built this sci-fi hallway. This is a concept design work, something to be done quickly but at the same time with a high level of details and information. I will show you the pipeline I use to create a photoreal and fast concept, using a 3D package like Maya and V-Ray to build and light a simple model of the hallway, and give the final look and texturing in Photoshop.

Let's start with the model. To make things really fast I decided to model and the light the hallway quickly, until the 3D looked decent enough, and finish the image directly in Photoshop. Laying out UVs and painting textures on every single object would require too much time, and I will show you how Photoshop can do miracles to get the job done. As you can see from the final image, the hallway is connecting a giant spherical hangar with a circular spaceship. The model of the hangar was really easy to do.

I created a sphere, drew edge loops in order to create a section like in the image, and deleted all the useless faces. I then created edge loops along the section and extruded inward in order to create those vertical and horizontal structural elements. With two simple cylinders I created the diagonal elements reinforcing the structure. I duplicated them to fill the structure and the section of the hangar is done (Fig.01). 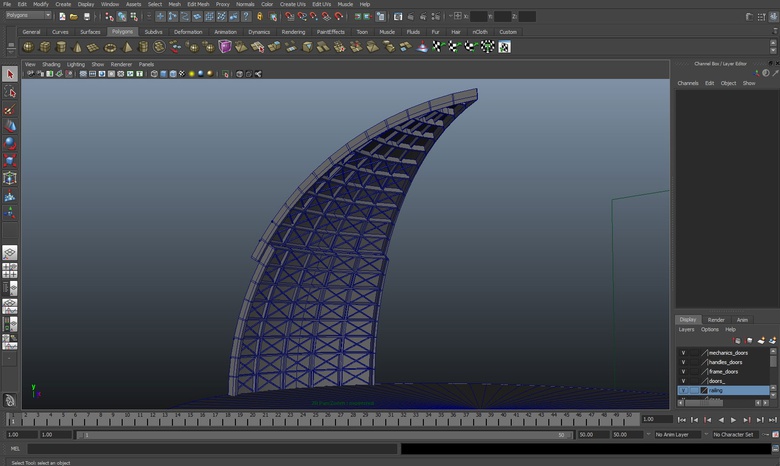 To make the ship I started modeling an arch following the profile you can see in the final image. I duplicated the arch 7 times. I connected the arches with two rings on the top and the bottom and with other three like in the image. The last thing is the shield. I just modeled an arch like I did before but thinner. I duplicated it multiple times like in the image in order to fill the space between the two arches (Fig.02). 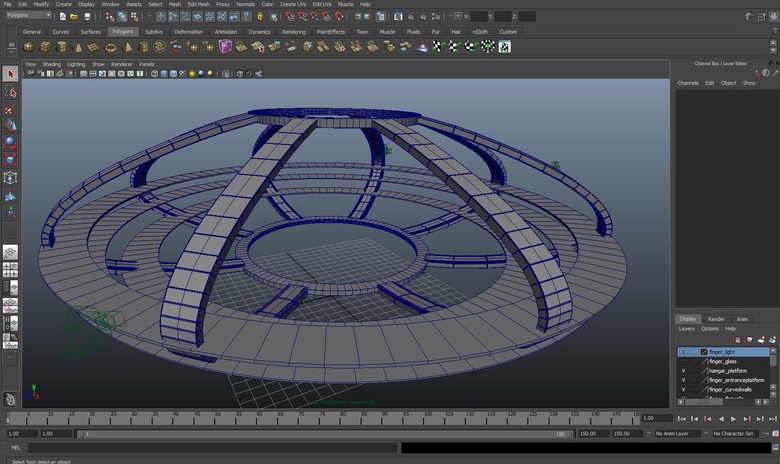 The environment outside the hallway is complete. The ship is now in the center of the hangar. As you can see I duplicated the shield only two times, leaving the other gaps of the ship empty. I knew that you would see just a small part of the ship in the final image, and it's always a good thing to minimize the geometry (Fig.03). 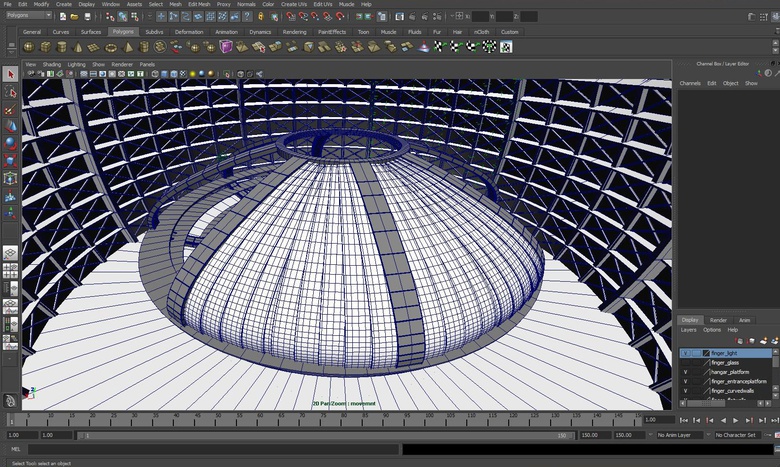 Let's move on to the main part: the hallway. The basic geometry is really simple, just a bunch of cubes and planes and it was done. Now I wanted to make it more complex and it was obviously too poor to be rendered. I took the corner piece, cut a small section, extruded it and duplicated it along the entire length of the corridor like in the image. Remember to always put edge loops along the edges of your geometry, so that you can nicely smooth the object (Fig.04). 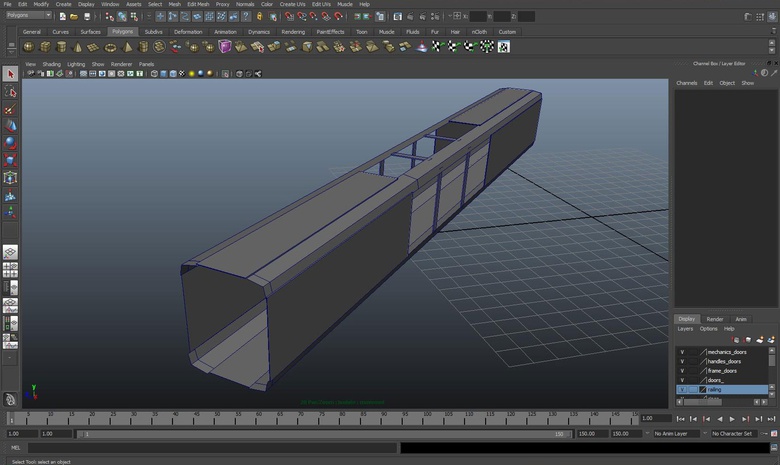 It was now time to model the main feature of the corridor: the portals. I modeled half of the portal, like in the image, just taking a cube with many edge loops and moving and rotating these accordingly to the desired profile. As you can see, I then extruded some faces inward to make the geometry more complex and realistic. I duplicated the other half, flipped it, merged the vertices, smoothed the geometry and the portal was complete (Fig.05). 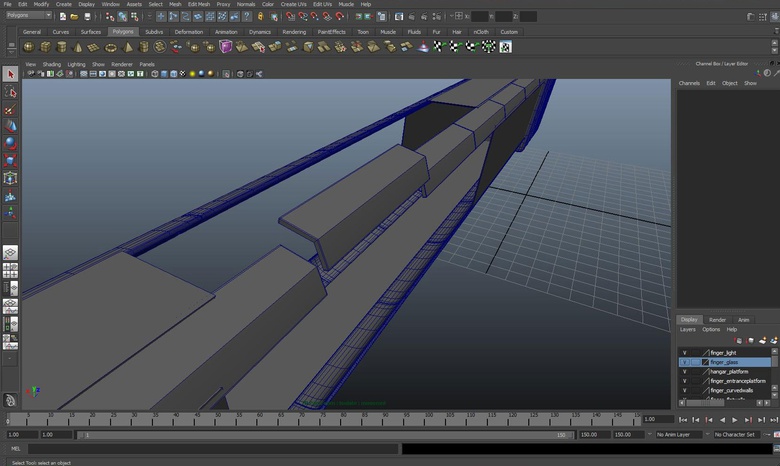 There were just a couple of final refinements. The floor panel is just a cube. Drawing edge loops, I created the necessary faces to extrude inward as shown in the image (Fig.06). 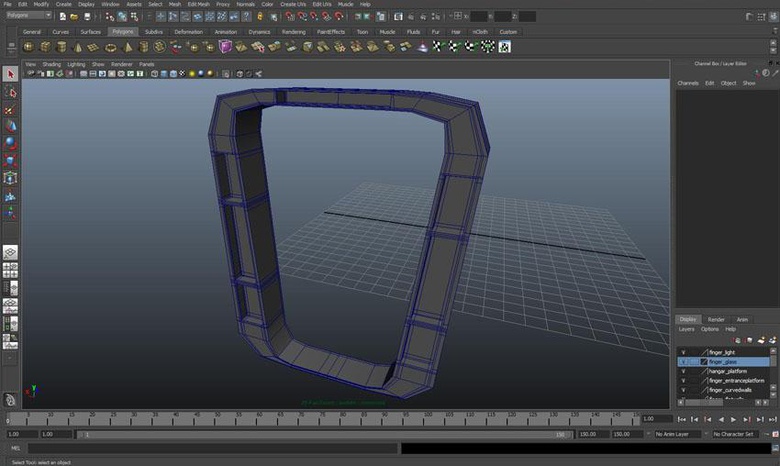 
The lamps are a plane with some edge loops that I moved to create the profile. Then I deleted the big central face in order to have just the thin frame and extruded it (Fig.07). 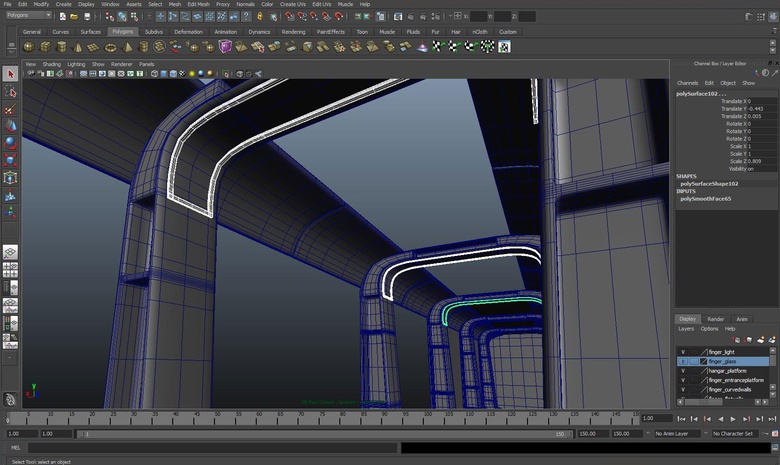 The frames of the windows were made in the exact same way, but I was careful to position the edge loops like in the image in order to create those nice rounded corners. I put some edge loops on the interior side of the frame and extruded the faces in order to create two nice cuts in the geometry in which to place the glasses (Fig.08). 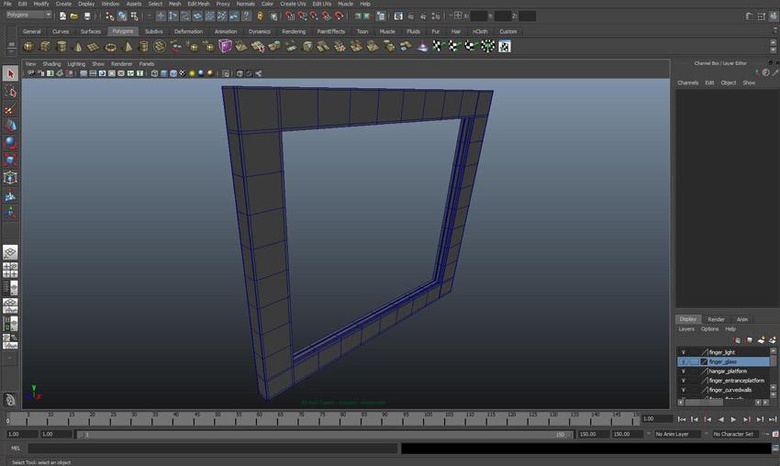 The model was done! As you can see, the process of creating a concept model is pretty fast; in a few hours you can design and model everything you need. Architecture is often made up of standard elements, as in this case. Model one piece well and duplicate it as many times as you need, creating visually complex models.

It was time to render the model! I created a new camera and placed it properly in the corridor.
For the rendering I usually rely on V-Ray. It's one of the best software packages out there for easily achieving beautiful and fast renders (Fig.09). 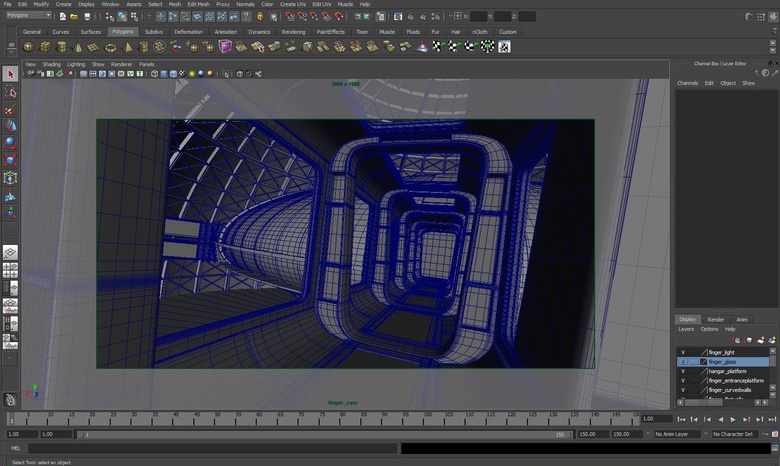 The hangar is lit by a big rectangular light at the top of the structure. In the image you can find the parameters I used. But this was not enough to properly light the hallway. Here I tried to approximately recreate a real lighting scenario (Fig.10 - 11). 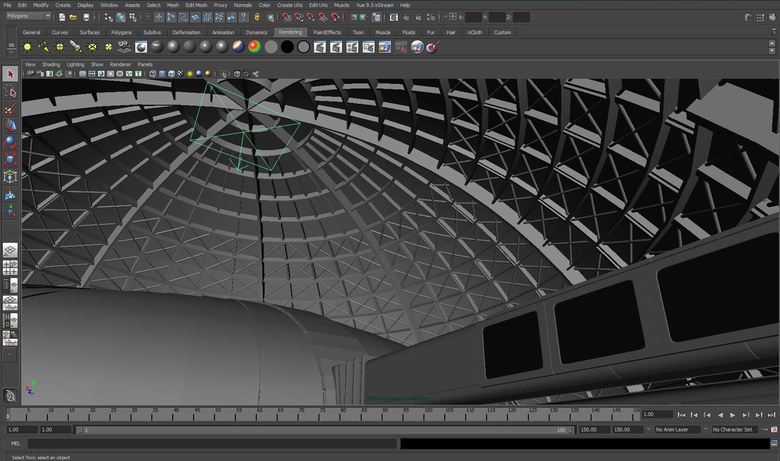 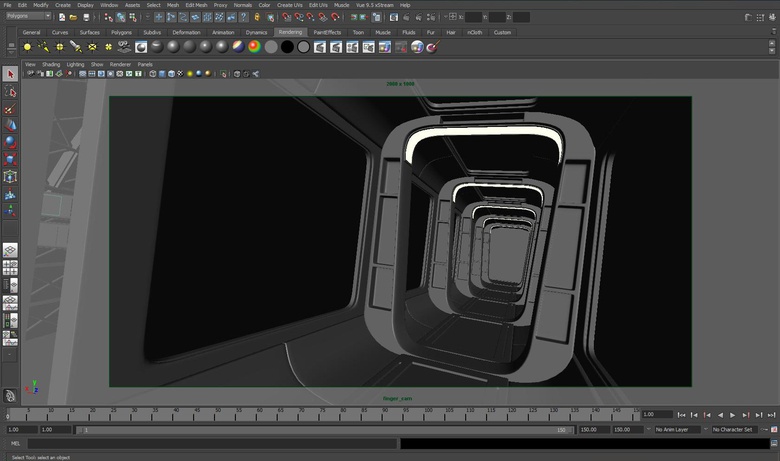 In order to do this, I created planes following the profile of the lamps like in the image. I assigned a V-Ray light material to these planes in order to make them surfaces capable of casting light on the hallway. This material is a really powerful feature and the result was pretty realistic.

In this case textures were not really necessary - I just needed a good metal shader that I could make dirty later in Photoshop. What I wasn't going to be able to reproduce in Photoshop were the highlights, which are critical when it comes to achieving a photoreal effect. Here are the parameters for all three of the shaders used in the scene (first three windows) and the V-Ray render settings (Fig.12 - 13). 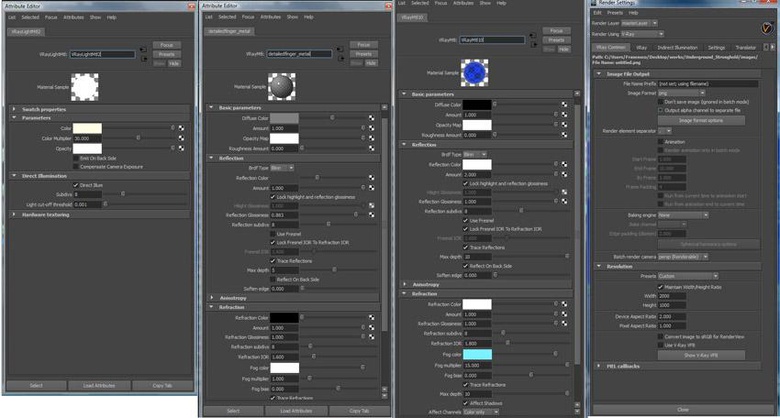 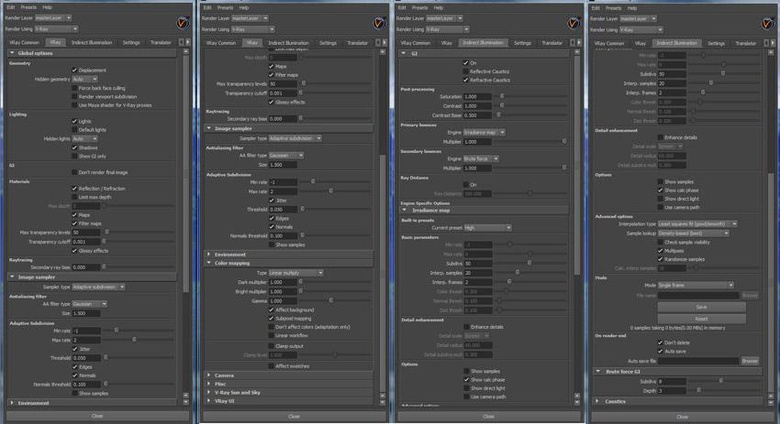 As you can see in V-Ray this procedure is terribly easy; you just select the render element you want to render out and it's done! Here the different render layers I created (Fig.14).

The 3D stage was finally over, and I could move on to making the image awesome in Photoshop. This part of the work was really fast as all the image needed was some tweaks and photobashing.

Note: As you can see in the future images, the hallway is flipped. I always flip the image while I'm working in order to refresh my eyes, and sometimes I understand that I can read the image better if it's flipped. This was the case with this piece.

The first thing I did was to visually separate all the background (the hangar and the ship we see outside of the window) from the hallway. In order to select all the background elements I used the Multimatte render elements I exported from Maya. I selected the different masks by just clicking Shift and clicking on the individual RGB channels. When the background was selected I filled a layer with a bluish color and just lowered the opacity. So I started to create atmosphere outside the hallway. Then I copied the layer with the lamps, the white part, duplicated them on top and used just a Gaussian blur filter to make them look like they were glowing (Fig.15).

Then I took the render layer with the glass reflections and put it in the correct position selecting the screen blending mode. I still felt that the atmosphere outside was not enough strong and dramatic. I put on top of the background the Depth of Field render element selecting the Color Dodge blending mode. This separates more all the objects and gives a more vibrant look to the background. I even added some smoke just using a soft white airbrush with low opacity, in particular behind the ship to define better the outline of the vehicle. This gives the feeling that mechanical objects are at work in the hangar (Fig.16 - 17).

I still felt that the lighting was too generic, with no precise direction. I added a lens flare on Screen mode in the same position as the 3D rectangular light on top of the hangar. Then I painted some vignetting on the edge of the frame with a soft black airbrush with low opacity. Now the direction of the light was clear and there was a nice transition from the brightest area of the image over the ship and the darker edge of the frame. This was an important step to make the image powerful (Fig.18).

Then there was another important step. The material of the hallway was too clean and polished. To make it look a bit more believable I took the image of a rust texture or concrete texture and blended it on top of the hallway on Overlay mode. This procedure gave a nice amount of detail and imperfection to the image and that's why I considered any texturing in the 3D package unnecessary (Fig.19). 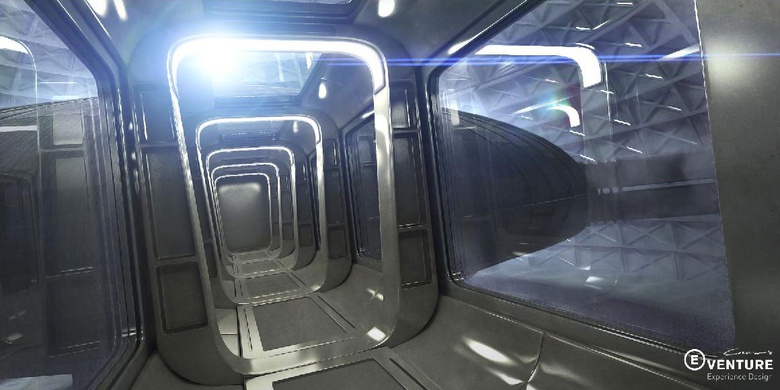 You can use this technique and multiple textures to add complexity to your geometry. I just blended an ice texture on top of the glasses, masking it out with a soft airbrush and leaving the texture just along the edges of the glass, creating a nice condensation effect.

To complete the hallway I added some photo elements to enrich the design, such as a couple of fire extinguishers and a caution sign on the portals. I even added a grid texture on the floor and a futuristic door at the end of the corridor. I color corrected the image using Curves and then added shadows with a soft black airbrush where necessary (Fig.20).

And the concept was done - I hope you enjoyed it!