This scene was made using Lightwave for modelling, Photoshop was used for the textures, background and post work. FPrime was used for final rendering.

One of the photos I took on my vacation in Spain inspired me to create a picture of a Spanish street. But I didn't want to create a copy of that photo in 3D so I decided to create a scene, where knights attack a little Spanish town.
I knew this would require a lot of different people to make the scene interesting - and I also knew that I would not be able to create 3D-models for so many different people. To model the knights was a logical decision, since the armour would be the same for most of the knights. But for the other people in the scene it was easier to create "place holders" - simple and ugly 3D-objects of different people in various positions (running, standing, lying and so on). These "place holders" were later painted over, they serve for casting shadow and help me with correct proportions. One of the more important models was of course the street with all the different houses. 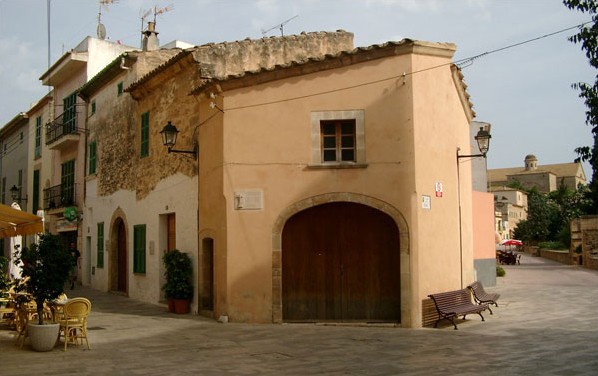 Photo I took on vacation

All houses were modelled the same way. The closer the model is to the camera, the more careful the model had to be made. A house is typically made by a plane representing the top view of the house - then this plane is extruded. Windows and doors are cut from this object with Boolean. Shutters and window frames where made by simple forms - boxes and extruded planes. 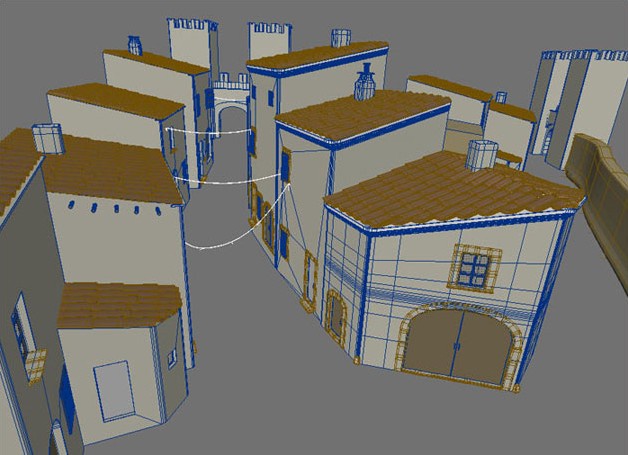 The shingles where made for the whole roof - which is pretty dumb because you won't see them and the scene is getting huge. A good thing would have been to create the shingles only for every edge of the roof, and to close the rest of the roof with a simple plane and a good texture. 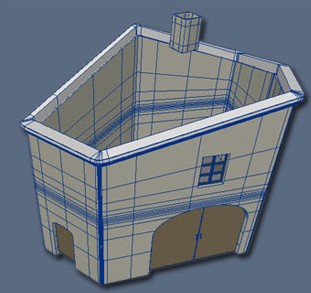 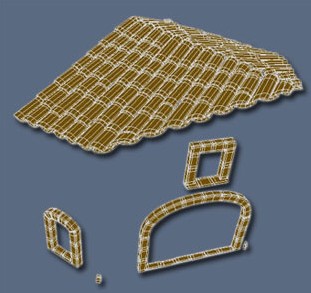 Subdivision modelling
After the first 3 houses I created the street. A rectangle with many segments was made. Then an UV map was added. The segments were bended into the right direction, the way the street would go around the houses. This simple model was sub-patched and further divided with the bandsaw function. The created points where then moved a little up to make the street look arched. 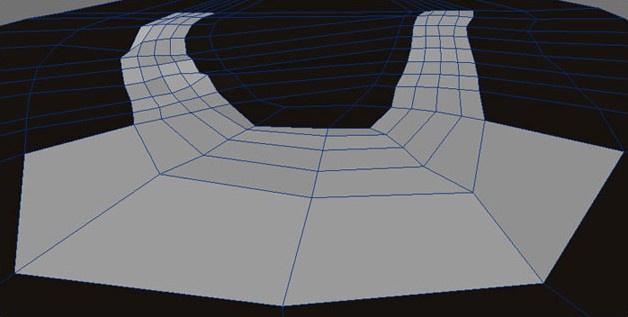 Low-Poly Model of the street

For the rest of the houses only 3 simple houses were created, copied and placed along the street-mesh. Some changes where made to make the copied houses appear more unique - windows where added, doors changed and so on. All houses got there individual UV-map for easier texturing.
After the basic scene was finished I started to model the knight's armour. I found very good reference photos in an online shop for medieval weapons. At first I made a dummy for the person inside of the armour. A box was extruded in all directions until a human form was reached. Not many details where needed, just the simple form of the hands and some more lines for the knees, ankles and shoulders for good deformation. The armour itself consists of several parts. These where made point by point, then the low-poly mesh was sub-patched. 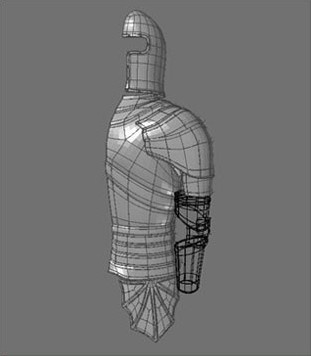 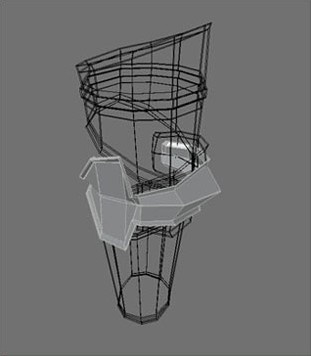 Low-Poly part of the arm 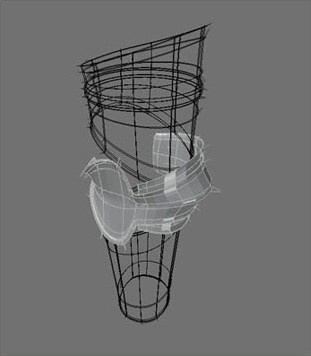 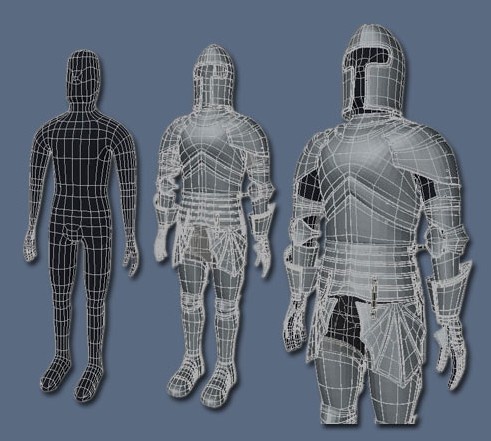 For the houses I made a screenshot of their UV-map and started to add several layers of different materials. The first layers were several Textures directly from the Total Textures V9 blended together. More details came in form of photos of old walls I took on location in Spain. Dirt and loose clay was painted directly into the color-map. After finishing the color-map, I made a copy of all the layers and made them black and white. To get a good bump map, I inverted some of the layers while others stayed the same, for example the layers where stones are included: in the color-map the stones are darker than the surrounding clay - for the bump-map this had to be changed. In other cases the fresh clay was very bright and was also supposed to be added to the wall at last - so the bump-layer wasn't inverted. Together with correction of brightness and contrast that gave me amazingly good results very simply. The resolution of most of the texture-maps was aprox. 3000x2000. The bump-map was also used as specular-map. 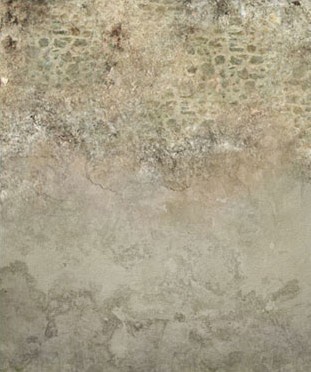 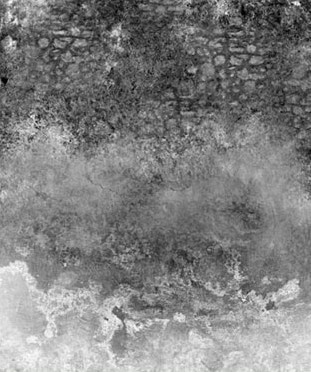 Bump map
The knight needed only very few textures - so most of them came directly from the "Total Textures V9". They did not even require much color correction. A few Procedural Textures where used too. There was no need to texture the model very well, because I wanted to add some different textures for all the different knights later in post-work.

I made a test-scene with the camera very early in creating the models for the street - this was to show me where to add houses to get a good look. I used this scene as basis and added all the other objects - 10 High-Resolution knights and over 20 "place holder" models for the other people on the street. Other details like the barrow, the barrels and some vases were added, too. 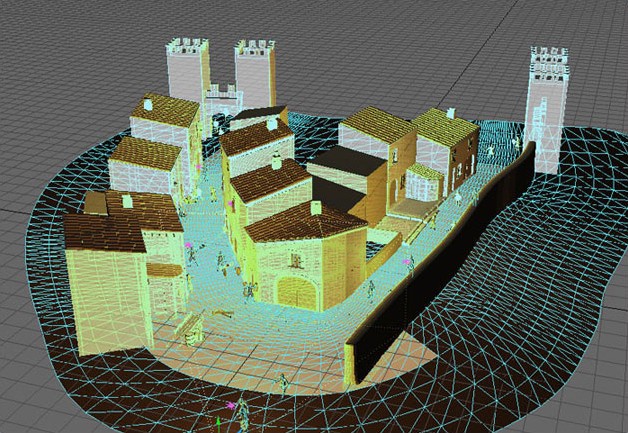 The little stones were more complicated. A few hundred of them were placed on a plane - collisions detection was used to let them "fall" correctly onto the street.
I wanted to use something similar for animating the knights - the dummy-model was animated with bones - the armour could have been deformed with hardbody dynamics. Unfortunately my pc wasn't able to compute any result. So the bones had to deform everything - the dummy AND the armour. All unwanted deformations had to be removed in Photoshop.

I made 5 lights representing the fire, and one light representing the evening sun. A fitting background color was added and "raytracing" was turned on for rendering. The resolution of the image was made twice as high as needed. This way antialiasing can be set to low which speeds up rendering. Also, post work in a higher resolution can result in a more consistent image. Rendering took almost one day.

To add all the details I used Textures and photos that where composed into the rendered image. The added elements where changed to fit the rest of the image (color, brightness, contrast). All elements were painted over with a tablet; hair, skin, blood, shadows, glow, smoke and dirt were added. My intension was to achieve the look of an old painting. It took me a lot of time until all elements fitted together. 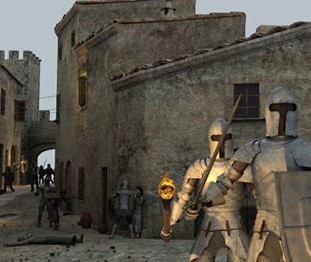 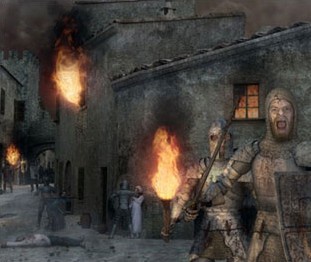 Thanks to 3D-Total for giving me the opportunity to use this great CD. There are so many different textures included you simply can't get photos from. It is a great help and a timesaver.