With all honesty, this was a challenge I took due to the fact that one of my friends was one of the judges for this contest. Not that I was looking for any help, but I was looking for some constructive criticism and advice. In addition, the idea of creating a Steampunk image sounded very entertaining.

As always the first step was to think of an idea for the project. The first thing that I thought of was recreating an airplane in a Steampunk style. That led to the conclusion of making a model of the Red Baron.

That decision almost got me disqualified, however due to the support of the other contestants who liked what I was producing, and a few logical arguments to justify my decision, I stayed in the game.

Ok! First things first, I had to come up with a concept for the project. Drawing with a pencil on paper has never been my strength, yet I managed to put a rough draft together. It was good enough for me to be able to use the approximate measurements to move forward (Fig.01).

I started with the airplane first. I did some Google searches, looked at a few pictures and decided to use the German airplane Messersmith BF-109. I downloaded the blue prints and started with the modeling of the plain.

I decided to do something different and move away from my usual thought on modeling. Instead of doing the entire plain first, then the details, I decided to model the airplane out part by part and piece by piece. Usually I cut the parts out, which allows me to put them together (Fig.02).

After the model of the standard airplane was done I started focusing on the details. I decided that this airplane would have two wings on each side and have a jet engine vs. propellers. Under the upper wings I placed massive machine guns. On top of the wings I decided to place an exhaust. And finally,Â I decided to place the jet engine under the body of the airplane. I then added a few minor details to make this airplane look and feel like it is a Steampunk style airplane (Fig.03).

After each part was created and placed together to create the final model of the airplane, I was happy to find out that the plain turned out exactly the way I wanted it. There was still a lot of work left to do and a lot more modeling of parts, such as the airplane's tires and the airplane's interior. Due to the fact that I was pressed for time and that this was a static image, I decided not to model the parts that were not going to be shown. Therefore my next step was to figure out which camera angle I was going to be using, to help me figure out what I still needed to model and what could be left out (Fig.04).

To rest a bit, and to do something other than modeling, I decided to texture out the model of the airplane. Because it did not make sense to me to do the UV map for each part, IÂ put some of the models together into one 3D image. First I made the airplane body, then the wings and then the rest. I used Photoshop to create the map layout.

I was not too satisfied with the way the secular map turned out, however I felt it would do just fine for this project. All the material was done in VRay as the rest of the scene was arranged that way as well (Fig.05).

This is an example of the material used for the modeling of the airplane. A simple setup without any complicated items (Fig.06). 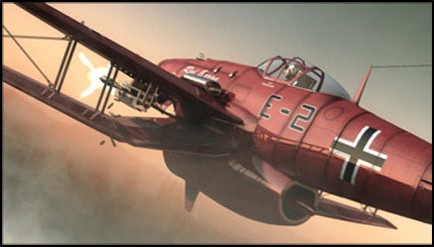 Since the main character (the airplane) was complete I decided to focus more on the remaining objects that were going to be part of the big picture. One of the bigger items in the scene was the zeppelin. I Googled around and found a few example models of it online. Since there was no real need for me to focus on any specific drawings, I decided to just use the examples to orient myself to the form of the zeppelin. I stared adding the details that would make it a Steampunk style zeppelin. That included huge propellers, golden details and decorations on the engine and the steel construction (Fig.07).

The zeppelin took a long time to create. A ton of details were left out due to time constrains. In the end I was really satisfied with the model. In the beginning, the idea was to make it blurry because of the fast movement of the camera, which is focused on following the airplane; however I realized that this would mean a lot of the details would be blurred out. So I decided to take the blur out a bit so that the details were not completely lost in the big picture. The people on the zeppelin and around it were really simple models, as they were too small for me to spend too much time on the details. All there was left to do was create the other objects in the surrounding scene, which in this case were the steel structure and the sky. Again, the clock was ticking and I threw together some simple models to construct the steel structure (Fig.08).

OK! The scene with all the models was complete. Just as I started to put everything together I noticed that a few things were missing. The airplane's cockpit was empty. I didn't have a lot of time left to construct the pilot. At the start of the project I'd decided to create a pilot and only show him from the shoulders up to reduce modeling time. For the pilot's outfit I decided to model out a leather jacket without any details and for the inside of the jacket I used fur. Overall the model would do (Fig.09).

Finally, all the details were worked out, and I could start focusing on the lighting and positioning. Since in my original brainstorming sessions I'd decided I wanted to include an explosion, I now had to think about how, and what to use, to create that effect. I decided to use Afterburn for my solution as I'd also used it for the muffler output of the airplane (Fig.10).

On the machine guns I used simple sparks that threw red fire sparks when they fired, which reflected on to some of the parts on the airplane. I also used a big spark for the big explosion. For the sun I used the VRay sun light. That was it. For the map of the environment I used VRay rendered and a White/Orange color scheme. For the reflections and reflection map I used a HDRI map. Primary bounces for the indirect illumination was an irradiance map and the second was brute force. 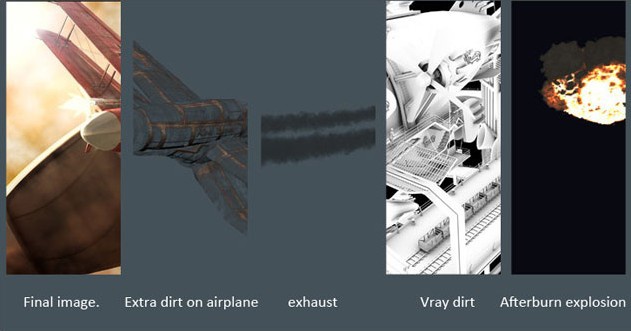 And that was it! This is the first time I have described the process of creating a CG image, but I hope that this will help someone is some way. The final composition, as well as color correction, was done in After Effects. It took me about two months to complete this project. Of course that time was prolonged due to other responsibilities such as work, social life, etc. My next project description will include more details and I will do my best to start documenting as I go. Hope to see you again!